Florida Tropical Fish Farms: Do you know where your fish are coming from? 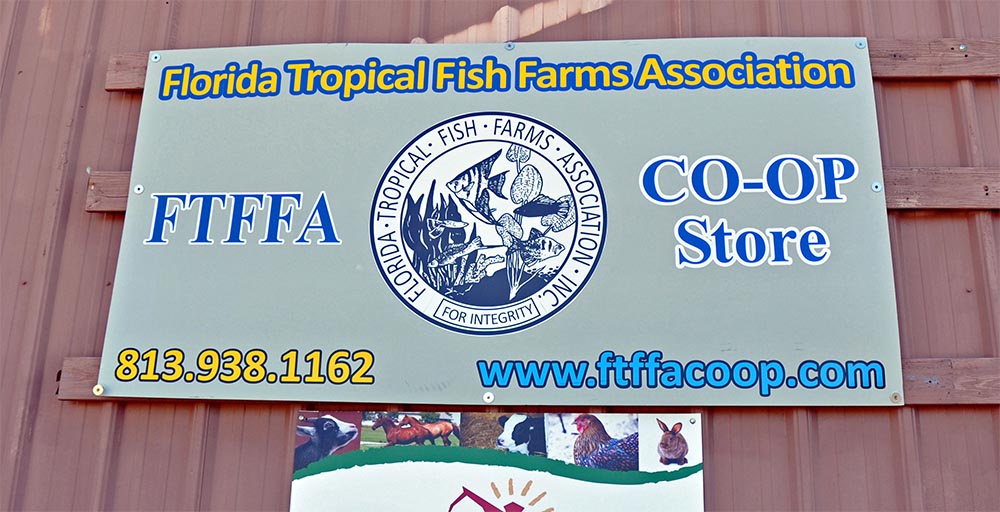 It’s not every day you learn that the Florida Tropical Fish Farms Association (FTFFA) wants to sell your magazine, along with fish rations by the ton, but earlier in 2015 we added their co-op shop to the growing list of local retailers and suppliers of AMAZONAS Magazine. 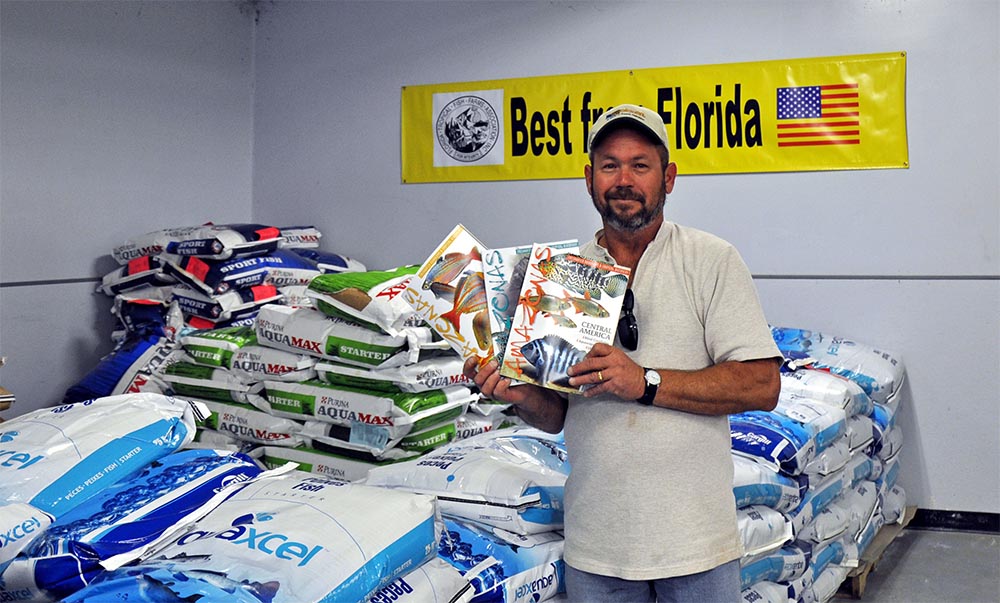 FTFFA is the trade association of professional ornamental tropical fish and aquatic plant breeders in Florida; FTFFA’s online membership directory currently boasts 81 regular members and an additional 99 associate members. FTFFA was founded in 1964, originally as a cooperative to help members purchase the supplies they needed to run their fish farms. This spawned the co-op shop, located at 5129 State Road 674, Wimauma, FL. The store now serves local co-op members Monday-Friday, as well as offering online shopping 24/7, shipping via UPS or freight for larger orders.

If the huge bags of fish food in the background of the above photo aren’t enough of a giveaway that the FTFFA isn’t your typical aquarium shop, I’d ask you to consider the impressive display and presence of the FTFFA and its individual members at the 2015 Aquatic Experience – Chicago. This is part of the ever-changing mission of FTFFA, which includes helping farmers market their fish and continuing to promote that “The Best Tropical Fish Come From Florida.”

I was floored by the amount of Florida-bred tropical fish on-hand in Schaumburg, IL, last weekend. Official reports stated that FTFFA had 63 aquariums on display, but that was just in the above display, which included a section of marine fish (not seen in the photo above) from FTFFA members ORA and FishEye Aquaculture. The offerings certainly drew attention, including that of AMAZONAS photography contributor Mo Devlin. 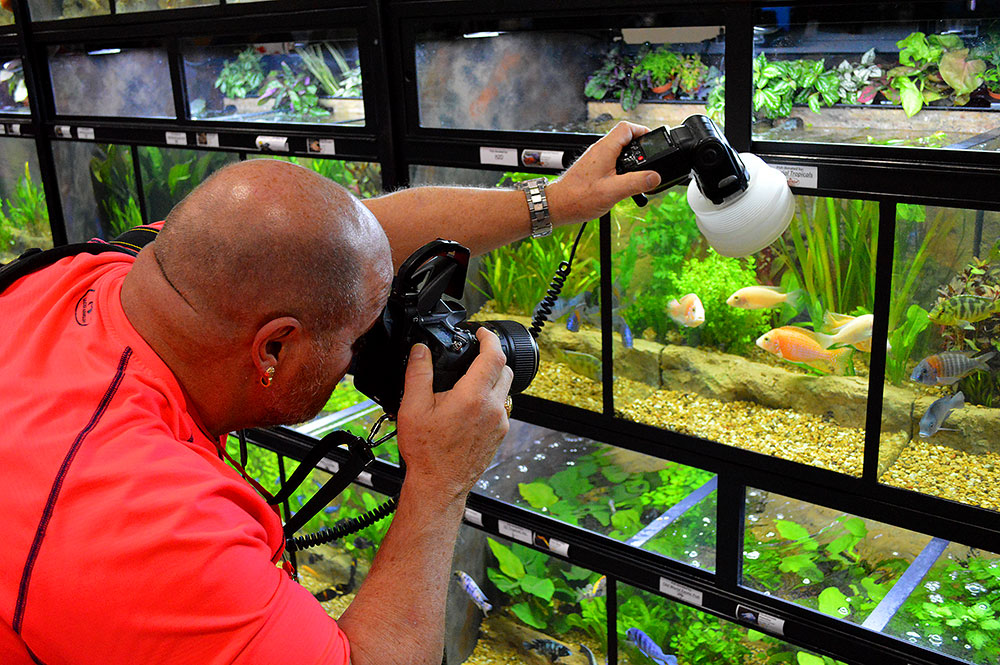 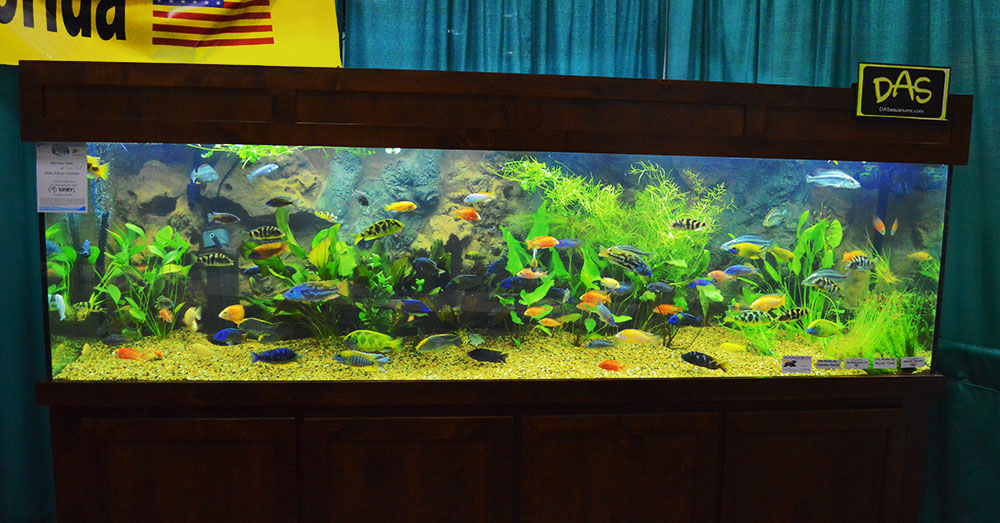 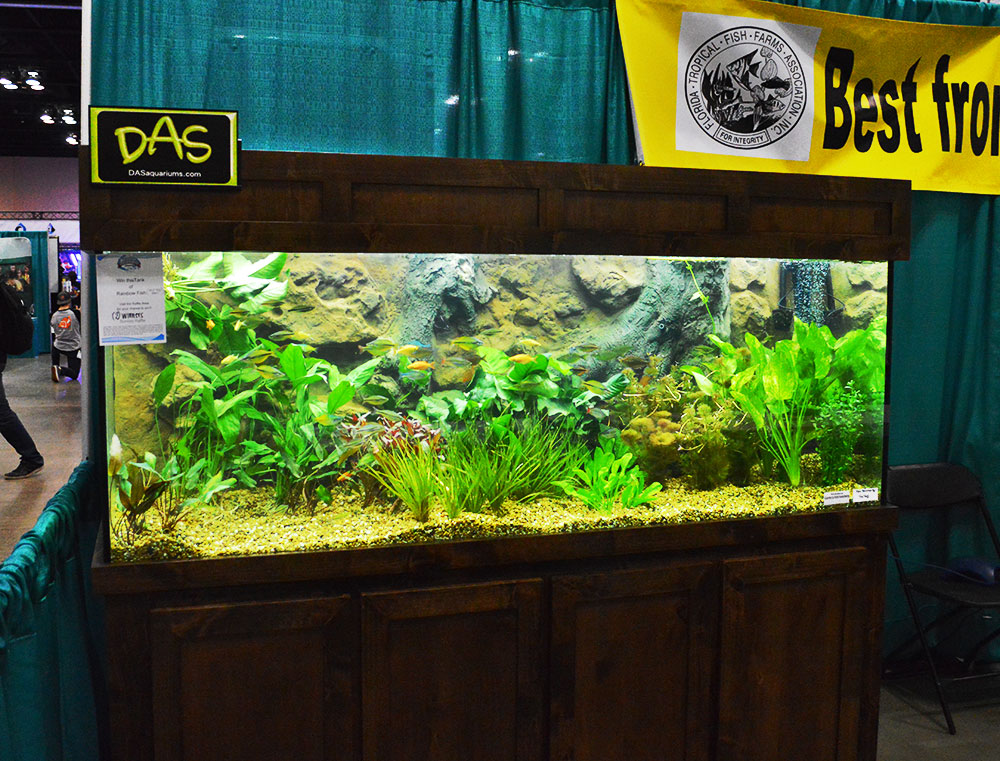 A mix of community-type fishes on display at the FTFFA Booth, Aquatic Experience – Chicago, 2015.

Of course, you have to consider that a couple FTFFA members had their own displays in the same area. They included another large display featuring the fishes from Ruinemans Aquarium, as well as a large for-sale offering from Imperial Tropicals. 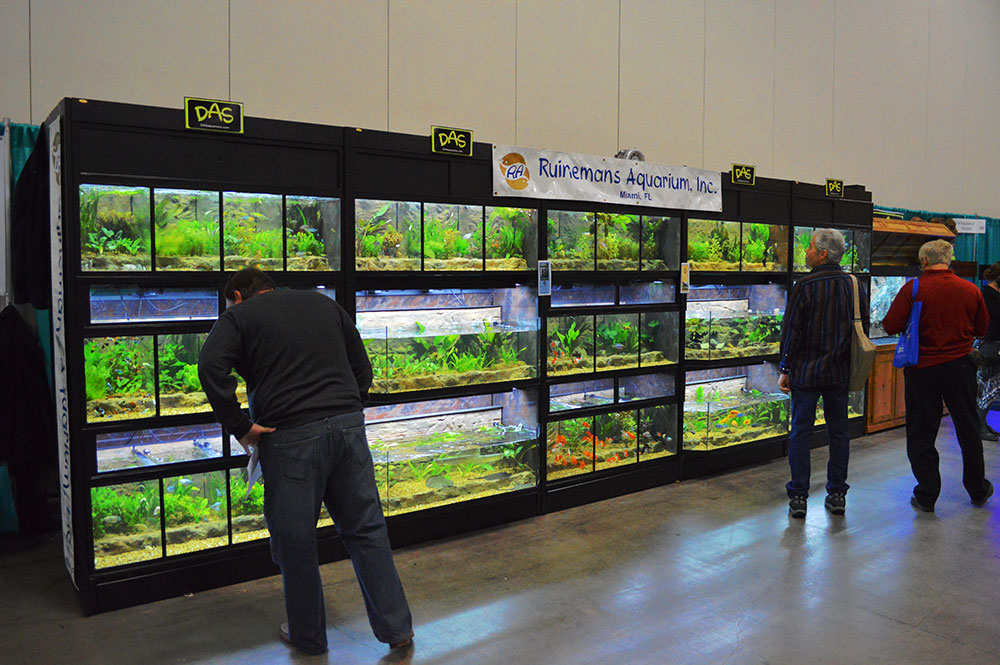 Dozens of aquariums featuring the fishes of FTFFA associate member Riunemans Aquarium were immediately adjacent to the main FTFFA display. 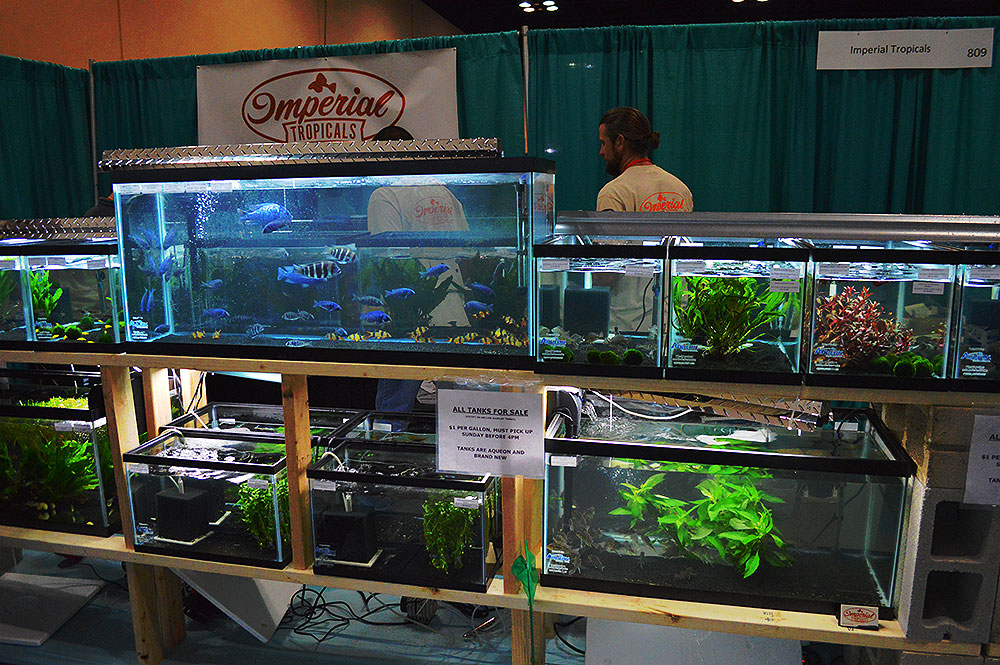 Mike Drawdy (background right) busy at work behind a small section of the dozens of tanks on display from Imperial Tropicals.

Hours of great conversation were there for the taking with such a massive public display from the FTFFA members; it is very rare that a person off the street has the chance to talk directly with someone intimately involved in a large scale, 3-generation family ornamental fish farm. Dustin Drawdy (Oak Ridge Fish Hatchery and FTFFA board member) and his cousin Mike Drawdy (Imperial Tropicals, FTFFA board member and Aquatic Experience Committee leader) both spoke of the Florida fish farmer having to change and adapt to a shifting market; Dustin focusing more on species which require biotech solutions for culture, and Mike talking about niche offerings and direct to consumer sales avenues. But perhaps the most interesting shift is the growing number of marine aquaculture specialists in the ranks of the FTFFA, including Foster, who is currently the FTFFA treasurer. 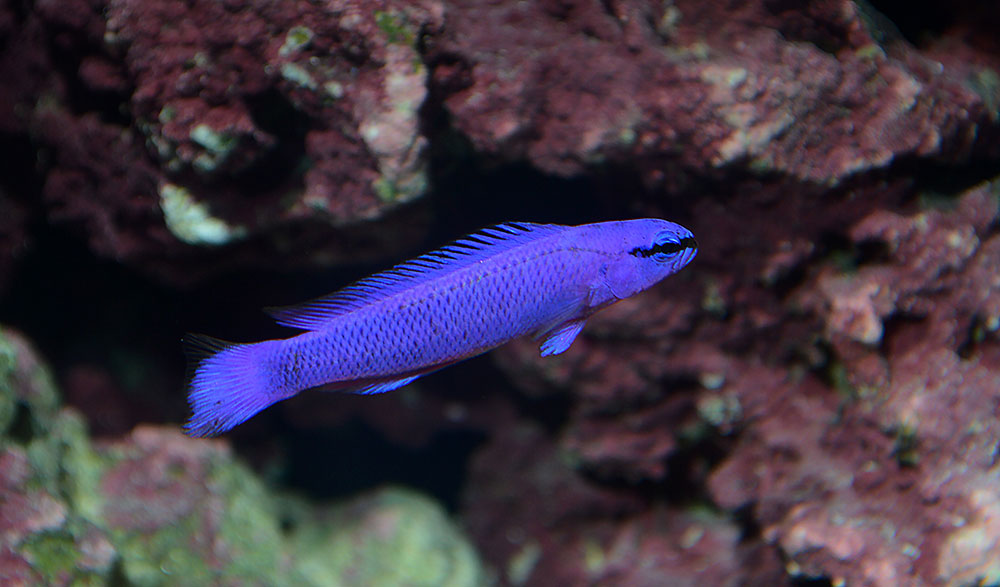 Pseudochromis fridmani, one of the dozens of marine fish species now produced by FTFFA member farms.

“Marine aquaculture is growing, and is taking quite the foothold in Florida,” stated Foster. “ORA has been an FTFFA member for many years, but FTFFA now sees marine ornamental aquaculture as more than just an experiment — it’s now a part of Florida fish farming. It’s here and it’s here to stay.” 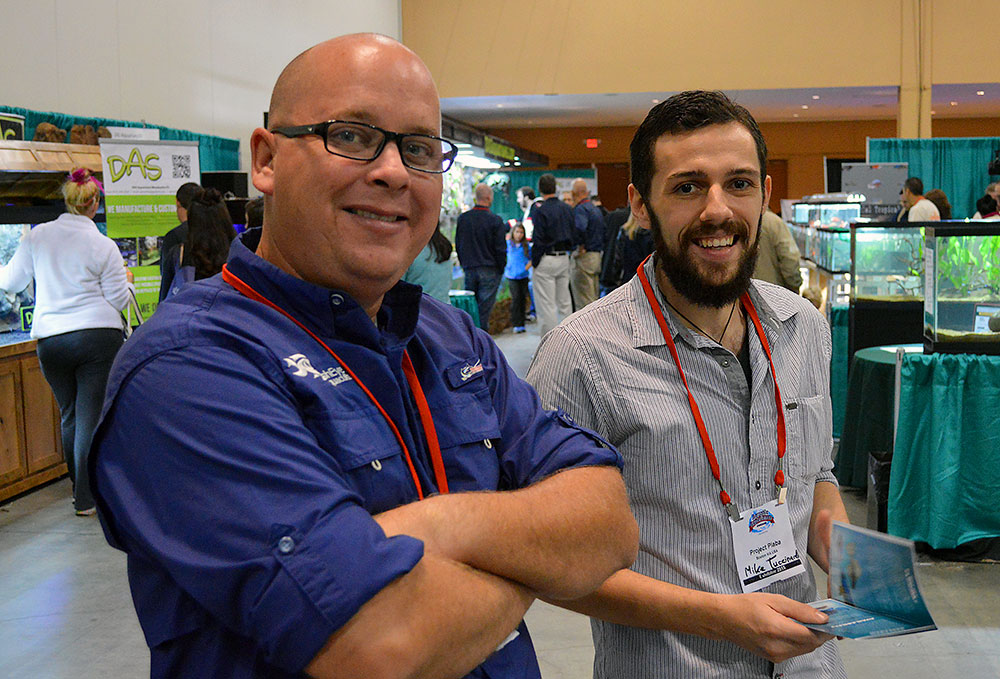 “With the Tropical Aquaculture Lab (TAL) at the University of Florida, they are there to assist Florida fish farmers, no matter what their problems will be, whether production problems, or how to culture a new species. It seems like forever; they only did freshwater fish, but with Craig Watson’s decision to bring marine aquaculture into the academic setting at TAL, the farming of marine fishes is seeing improved support in Florida.” 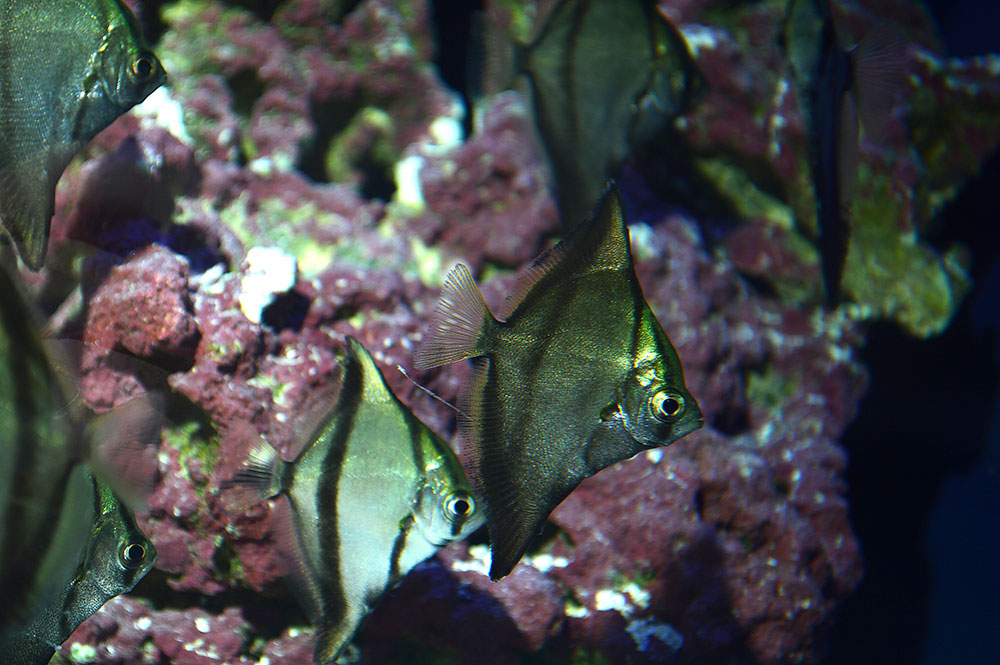 The captive-breeding of Mono sebae in Florida is unique, merging the know-how of working with pelagic spawning marine fishes, and large scale growout with offspring destined for freshwater, brackish, and even marine tanks!

Turning back to the FTFFA, Foster went on to emphasize the massive effort it takes to pull such an impressive display together. “Officially, we would like to acknowledge and thank Mike Drawdy of Imperial Tropicals for coordinating the farmers to donate the fish for display; Scott Moore of Segrest Farms and Arie DeZwart of Ruinemans Aquarium for orchestrating the logistics of getting all the fish to Chicago; Southwest Airlines Cargo for shipping the fish; Apet for picking up the fish at the airport and setting up and tear down of displays; and DAS Aquariums for providing us with a beautiful display to show off our fish!”