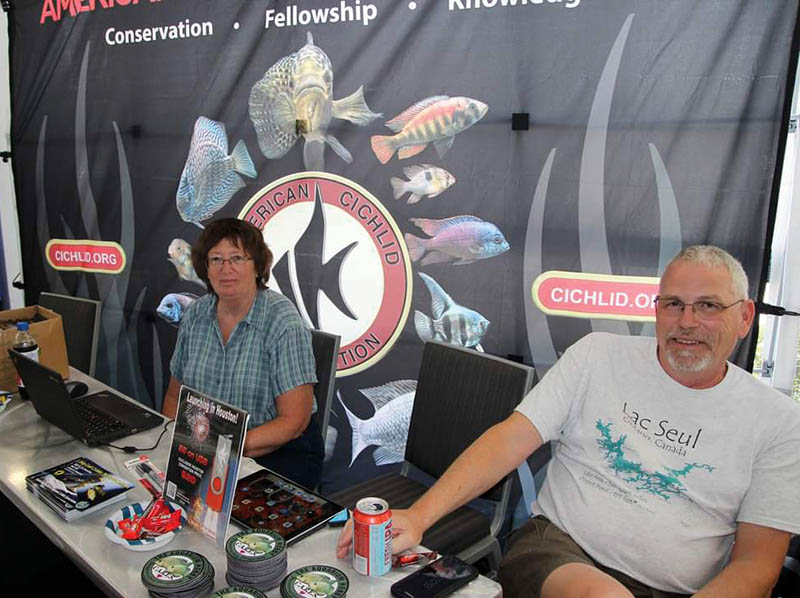 Jan and Phil Benes at the ACA booth.

by Stephan M. Tanner and Rusty Wessel
Images courtesy of the Benes family

Shortly before Christmas, high above the clouds in a plane to Ohio, I am on my way to honor a special friend, taken away much too soon from his wife Jan, his daughter Nicole, son Chris and daughter-in-law Sue, grandkids Amelia, Grace, and Rosalyn, and his countless friends. He was and is a giant among the people I call my friends. The loss of Phil Benes leaves a huge void among his family and friends, and in our hobby. As an avid fish keeper and also a fisherman, he loved to go after big walleye and pike on his yearly trips to Canada. I probably heard the story half a dozen times over the years: “Jan and I were driving north of the border in Canada in the middle of nowhere. Suddenly there was a loud clank, and one of the wheels of our boat trailer was passing us… well, that’s not good”. His dry humor was refreshing. Jan loved to cast the line or hang out on the boat reading a book while Phil was jigging. But the grin on his face when he caught something was unmistakable. It is a grin I will never forget because every time we met, he showed it, usually by adding: “They let anyone in here…”. Phil, thank you for that!

Phil Benes has been part of the backbone of the American Cichlid Association (ACA) for as long as I remember. He organized the 1999 convention in Detroit and, after moving to Ohio, he organized another three successful conventions in Cincinnati (2003, 2009, and 2016) with the “mob” of the Greater Cincinnati Aquarium Society (GCAS). Phil was the convention liaison for the ACA for over 15 years. He did not volunteer for this duty seeking fame or praise; he simply wanted the events to work and for people to have a great time. He made things happen, and he patched hiccups as they occurred. In 2010, Phil was awarded the title “Fellow of the ACA” (FACA). This is the highest award that the society confers for outstanding service to the ACA. The void left by Phil’s passing will remain forever. 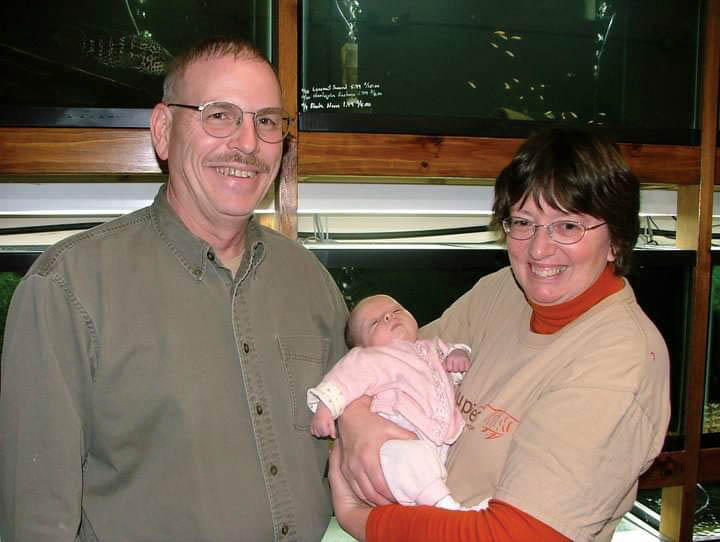 Phil and Jan as proud grandparents.

Phil was also a gracious host to the many speakers that GCAS invited to club and convention events. He and Jan made everyone feel welcome, took them to dinner or cooked up a delicious steak. As late as in October 2020, he hosted me (Stephan) to offer his club a little normalcy in this difficult time of the pandemic. Speaking outside in front of a big screen, with everyone socially distanced in his yard, it was my pleasure to present one last program in his presence. I feel deeply honored to have had that opportunity.

It is time to bring in voices of his many friends who share their memories.

Rusty Wessel (ACA Fellow & Board Member, KY): In 1999, Phil was the chair for the ACA convention in Detroit, hosted by the Michigan Cichlid Association. I was the convention liaison for ACA at that time and worked with him for over a year preparing for the event. For many years prior, the ACA was losing money pretty regularly after clearing large profits from three successful International Cichlid Conferences (ICCs). Hence, these cash reserves were dwindling quickly. We had a treasurer who misplaced funds, the Buntbarsche Bulletin was extremely costly to print in color, and members were not renewing. As a result, the ACA was on the brink of going under. When I arrived in Detroit, I saw the hard-working and smiling Phil Benes, and the first thing I did was to pull him aside. I placed my arm around his shoulders and simply told him that if Detroit and his convention would not make a good profit, it very well could be the beginning of the end for the ACA. Phil just looked at me and gave that shy smile and said “Gee, thanks a lot for the additional pressure”. Then, he and his hard-working team (mostly Jan) proceeded to pull off one of many hugely successful and profitable ACA conventions. Phil often recited this same story at banquets over the years, but it really was Phil and Jan Benes that helped save the ACA. Our membership and I personally will miss him forever.

Don Danko (OCA Board Member, OH): In addition to his support to the ACA, GCAS, and other clubs, Phil was a mainstay at the Ohio Cichlid Association (OCA) Extravaganza each and every year. He always attended with his wife Jan and often with his son Chris. His “Cincy Mob” of GCAS members showed up every year as well. I did not know until two or three years ago that Phil actually moved their November monthly meeting date to another weekend to avoid conflicts with the Extravaganza so that the Cincinnati members could attend both events. That is just the kind of thoughtful guy he was. He and Chris were also a great pair of auctioneers that worked as a team at the GCAS in Cincinnati. I saw them in action a few times and was always impressed with the efficiency with which they got the job done—hardly a second was wasted! I thought we might learn something at the OCA, so I invited Phil and Chris to take a turn in one of our auctions and to show us how it is done. Always up for a challenge, I think Phil turned up the heat on purpose and cranked out well over 100 bags an hour!

Steve Lundblad (The Wet Spot & The Cichlid Exchange, OR): The first time I really talked with Phil was at the ACA convention that he put on in Detroit (1999). I was selling stuff for Club Snail in the hotel lobby, and he kept telling me I could not do that. But I tried again and again, and he would always shut me down. Finally, he gave me a table in the vendor room. Not the best place, but I understood he had to make things work for me and the hotel. He was always good at brokering deals. He motivated people to work together for the best of the ACA. He was a hard worker who always saw both sides of an issue. We need to find someone who will work at least half as hard as he did. Plus, we always talked beer, and we both love IPAs! He was such a great friend and someone that I always looked forward to seeing at all fish events. He will truly be missed! Rest in peace, my friend.

Spencer Jack (aFISHionados, Winnipeg, MB): I first met Phil and Jan almost 20 years ago at an ACA convention. I have Phil to thank for getting me started on speaking about my passions for cichlids and so many other topics that followed. Soon after giving a presentation, I would receive an email from Phil about the next one, which would send me scrambling to make up something new in case the same crowd would be present. It dawned on me after all these years that he never really asked but rather told me that I was to speak in a certain city on a specific date, and I never once questioned it. His promotion of the hobby at the national and local level left an impression on me and many others. Whether he was involved in small club events or a national convention, Phil was present to facilitate when he could. Yet, no matter in what city we crossed paths, there was a constant and that was Jan. I honestly cannot recall a single time meeting him without the two being together. Many fish guys escape to conventions to nerd out without their “much-better-halves” alongside. Jan and Phil, you two are the shining example that you can share passion in life, and I will forever enjoy the time we spent together.

Godspeed Phil, and may all your fish spawn or bite wherever you are!

Your friends,
Stephan M. Tanner and Rusty Wessel,
on behalf of all the many lives you have touched.

What should we learn from Phil’s life? Join with friends and participate, become a member and ultimately a friend. This goes far beyond the hobby of fishkeeping! Many have observed that we join the aquarium clubs because of the fish, but we keep coming back for the friends we have made. During many conventions and events, we share our lives and experiences, we get to know the spouses and kids. Not on Facebook or Zoom, but in person we become part of the fish family. Those relationships make a life worth living, but also make this final goodbye so hard. 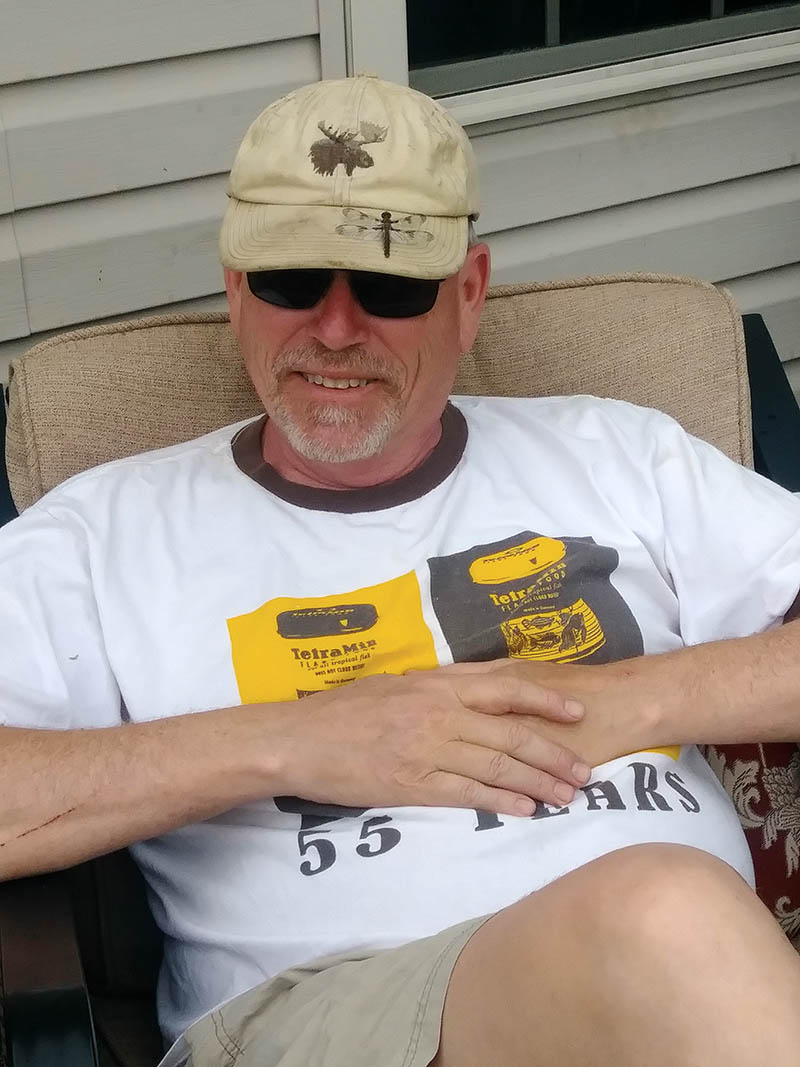