When is a larva a larva and a fry a fry? 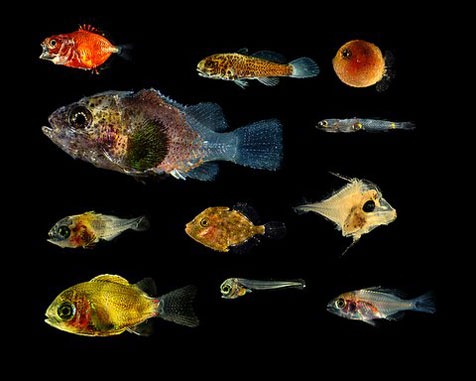 My recent blog entry on the microscopic gourami raised a curious question: what is the difference between larvae and fry?

This is a good question and helps illustrates some of the confusion that terminology creates within such a broad field. Is a Blue Tang always Paracanthus hepatus and is a goldfish always gold?

The list of questions could go on and the answers are often ever more challenging. For quite some time I thought the difference was as simple as the salt in the water — fry being freshwater and larvae being marine.

In its most classic definition, larva refers to a singular organism (usually an insect or a fish) that must undergo a complete metamorphosis before assuming adult morphology and behavior. Larvae is plural and used to define more than one of the same or different species.

Fry is generally a term used in the aquaculture industry to define the production of “seed” for commercial market. So, a larva could be a fry, but a fry doesn’t necessarily have to be a larva. A fry could be saltwater and a larva could be marine. Got it?

The life history of fishes is surely complex and full of exceptions, but the most widely accepted definition of larva is a newly hatched fish (freshwater or salt) that is adapted to life in the open water before settling or recruiting to the adult habitat and life style.

This is pretty simple in marine systems. Pelagic eggs are released directly into the water column or pelagic larvae hatch from demersal eggs and enter the big blue. Here, they develop away from the benthic structures of rocks or reefs for a period of weeks before metamorphosing into the juvenile form that adopts a demersal life style.

We often do not use the term metamorphosis when defining the early life cycle of freshwater fishes. Newly hatched freshwater fishes are typically much larger than marine species and generally do not undergo such drastic developmental pathways. On close inspection though, newly hatched forms of most freshwater species look markedly different from the juvenile or adult forms. If we look at the photograph of the Gold Gourami, it certainly doesn’t look like the adult. I assumed that it warranted the term larva.

Every aquarist, fish farmer and fish biologist uses lingo to define certain developmental stages. Some of these terms are more widely accepted than others. To my mind, the term larvae is simple and somewhat all encompassing of the early life stages of fish, freshwater and marine.

Many have adopted sub categories such as prolarvae to define the stage of pelagic spawning fishes after hatching, but before first feeding. Some use this term, while others refer to this stage simply as early larvae.

Another difficult definition comes after metamorphosis, but before settlement. Most fish biologists refer to these as settlement stage larvae, but others call them pelagic juveniles.

For those who study and breed fishes, it is another world, full of wonder and, yes, confusion.