Don’t Release Fish Into the Wild! 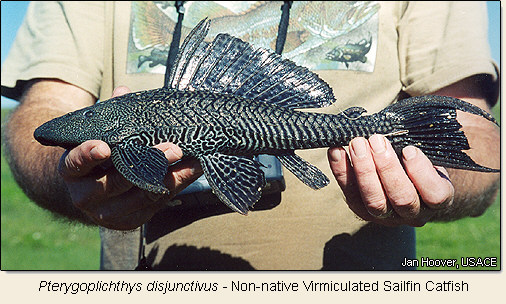 The government of South Africa is considering legislation aimed at controlling invasive organisms, including fish.  Despite appeals to aquarium owners not to release “plecostomus” catfishes into natural waters, specimens of Pterygoplichthys disjunctivus, the vermiculated sailfin pleco, have been collected from South African rivers.  According to a report by John Dawes in the March issue of Pet Product News International, the US Geological Survey is conducting research to determine potential ecological effects of the pleco “invasion.”  Dawes notes the same species has been reported from seven other countries, including the United States.

Ecologists have been begging aquarium hobbyists for years not to release exotic fish into natural waters, but the problem repeatedly crops up.  While we still do not know enough about ecosystem dynamics to predict the long term consequences of exotic species invasions, a prudent approach would be to assume they are not helpful.  All of the weeds that plague my garden, for example, are exotics.  We can assume they have been introduced since the arrival of European colonists.  Therefore, in a couple of centuries natural selection has failed to eliminate them.  Plenty of reports show that non-native species, from the zebra mussel to Asian water milfoil to Indo-Pacific lionfish, are wreaking havoc wherever they have become established.  In the case of the vermiculated sailfin pleco, they could be affecting native fish species or damaging invertebrate habitat (which affects the food chain) or even, as a result of their breeding behavior, contributing to bank erosion.

The point is that the effects of introducing any exotic species into any habitat are unpredictable, typically negative, and of unknown duration.  Perhaps, in a thousand years, the local species will adapt to the invader, or perhaps the invader will fail to thrive in unfamiliar surroundings and eventually die out.  But in the meantime, the entire ecosystem can be adversely affected.

And, as a political matter, introductions of invasive exotics by the aquarium industry are unlikely to win us any supporters.  So, please, never release an unwanted fish into a nearby lake or stream.  Even if the odds of its survival seem small, don’t take unnecessary risks.  Talk to aquarist friends and your local dealer.  Maybe you can find someone to take the fish off your hands.  Or, as a last resort, euthanize the fish.  But don’t release it into the wild.