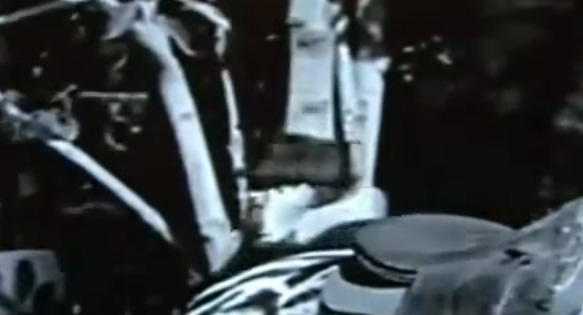 Making the rounds of the interwebs last week was the video from a Charlie Chaplin film from 1928 apparently showing an elderly women walking along talking into a cell phone:

Dubbed the “time traveler cell phone”, people seriously feel that this clip shows something unusual.  Why on earth do people think she has a cell phone?  I heard NOBODY ask who in the world she might have been talking to (so there are at least two time travellers?) and then, more importantly, how was the cell phone working without cell towers?  It would be more likely that this “time traveller” would be using a simple two-way radio.  What makes this video so compelling for some people is that we are all so in tune with the body language of a person walking and talking on a cell phone, and that makes it difficult for us to see this video any differently.  IMO, in this scene, she is holding a hearing aid to her ear and is talking to the elderly man in front of her.

So – what does this have to do with fish?  In solving problems, applying Occam’s razor is usually the best course of action:  basically, selecting which of the competing hypothesis that makes the fewest new assumptions.  So; a new photograph of the Loch Ness monster is likely to either be a hoax, or can be explained by some other known natural phenomena, as these have already been shown to have been the cause of previous Loch Ness monster sightings.  It is much less likely that the photo is actually OF a monster, because that would require proof of a new hypothesis.

Things aren’t always what they seem.  Many years ago, a person called me and said they had found an unidentified eel while cleaning out a storm drain.  After asking many questions, I finally admitted I was stumped and asked if they could bring it in for me to see.  When they arrived, I examined what looked like a brown, eyeless lamprey eel.  It had a 1” diameter opening at one end, and you could distinctly see myomeres (muscle banding) running around its body.  At the distal end, the body tapered to a flat tail.  It was about 18” long and 1.5” in diameter.   A number of people observed and commented on it.  Some felt it was indeed a lamprey, others thought it was some sort of giant segmented worm.    I got a scalpel and cut the thick rubbery skin.  Inside was a weird network of fibers, a bit lighter than the skin.  I suddenly had an idea – I gave the creature a sniff and determined exactly what it was – What did I smell?  A very strong odor of paint! This “eel” was a huge drip of oil-based paint that somebody had dumped down a storm drain.  The glob of paint had adhered to a root (the reason they were cleaning the drain).  Flowing water had stretched to glob of paint out until it dried.  The smooth rubbery skin looked so real, everyone wanted to come up with a biological answer to what it was.

Then there was the case of a spinner shark caught in Lake Erie.  Other aquarists struggled to determine just how this species of shark could have come to live in the Lake.  They debated salinity tolerances of the species, could it have migrated through the Saint Lawrence Seaway, etc.  I was more interested in the wrinkly skin of the shark seen the its photograph – obviously to me, someone had caught fish shark in Florida or the Carolinas, froze it, brought it back to Ohio, thawed it out and “caught” it in Lake Erie.  Of course, to follow this line of questioning, one would have to call the person who caught it, a liar….but the same hoax had been perpetrated in Chicago years ago with a bull shark.  The prankster had brought the shark back from Florida.  Early one morning he went to a beach in Chicago, rammed a hook in the shark’s mouth and swam it out into deeper water.  He then sat there until enough bathers showed up later in the day.  He then started jumping around and reeling in his catch.  When he got it to shore, he beat it to “death” with a baseball bat.  Of course, nobody questioned why he was fishing in Lake Michigan with a baseball bat by his side and a hook the size of his fist….

If you think about it, virtually every major challenge facing us as aquarists is a direct result from our needing to solve a particular unknown animal husbandry problem, (or series of problems) concerning our aquariums.  Specimen loss is the penalty for failing to meet this challenge.  The rewards are healthy, growing, or reproducing organisms.  Use Occam’s razor in your development of a solution – the weird new disease your fish have is more likely something commonly dealt with by others before, and is just new to you.  High ammonia levels most likely are derived from your animals, not the window cleaner somebody used in the next room, or as the result of some nefarious poisoning plot.