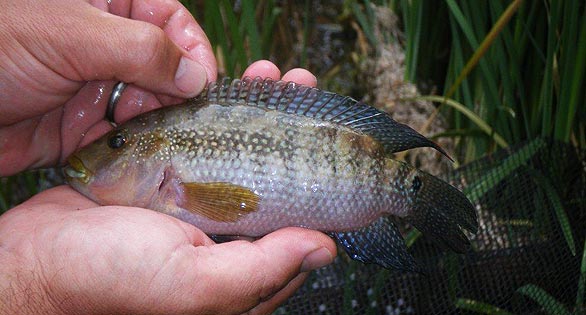 It may be the dead of winter, with overnight lows plummeting below freezeing in Hot Springs, South Dakota, but State fisheries biologists in South Dakota are blaming irresponsible aquarium hobbyists for introducing a population of Jack Dempsey cichlids, Rocia octofasciatus, in the Fall River.

Cold northern winters would normally kill off tropical species in such waters, but Fall River is noted for having warm thermal springs that flow at 70 degrees F (21 degrees C) year-round.

“The hot springs in the river makes it perfect for cichlids,” said Mike Smith, aquatic nuisance species coordinator for South Dakota Game, Fish and Parks. “We first found a Jack Dempsey there in 2009. Then, two weeks ago, we found multiple-year classes.

“And there’s no way that the fish could have gotten there except aquarium release.” Smith was quoted in an article on Activist Angler.com.

The article goes on to suggests that, “In this case, the Jack Dempsey’s impact on native species likely will be minimal”, citing that forage species will be replenished from areas beyond the thermal refuge provided by the localized hot springs.  However, the article conveys that the scenario is not as lukewarm for other examples of aquarium-introduced species, particularly aquatic plants.

This finding of an established Jack Dempsey population in South Dakota adds to growing outcry over the dumping or careless release of exotic aquarium fishes and plants into native waters, where they can sometimes thrive and impact endemic aquatic life populations and species balances.

Read the full article at – ActivistAngler.com