In Search of the Blue-Eyed Pleco 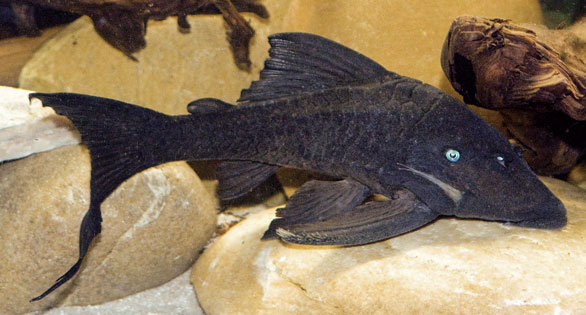 It was April 2011, and it had been over 20 years since my last visit to the Magdalena Valley in Colombia. This time, my objective was to discover why the export of the legendary Blue-Eyed Pleco, Panaque cochliodon, from this region came to a standstill in the mid-1990s. What could have caused this sudden change?

For many years the Blue-Eyed Pleco, Panaque cochliodon, was sold incorrectly as Panaque suttoni in the aquarium hobby, and even called by this name in the scientific literature. The type locality of P. cochliodon is the Río Cauca in Colombia. Another species that purportedly has blue eyes is Panaque suttunorum from the Río Negro, Maracaibo basin in Venezuela. P. suttunorum has not so far turned up in the aquarium trade, while the opposite is true of P. cochliodon. I first imported both sexes of this fish with the intense blue eyes as long ago as the late 1960s. These catfishes were not very popular initially, but from the mid-1970s to around the mid-1990s it was virtually impossible to get enough of them to meet demand.

The high losses among imports were attributable to the difficulty of transporting the specimens, which were usually large. There were virtually no specimens smaller than 6 inches (15 cm) total length caught, let alone shipped from Bogota, Colombia, the only export location.

I traveled on several occasions to the collecting area. Every time this involved a hellish journey down to the middle of the Magdalena drainage along one of the most winding and dangerous roads in South America. 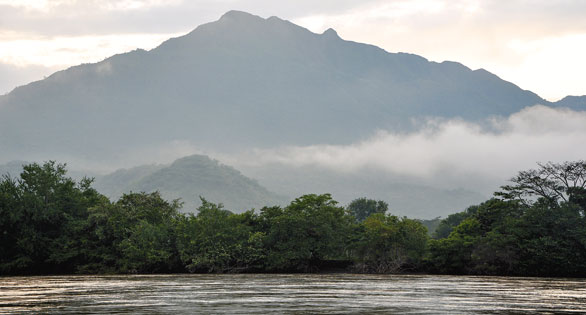 The majority of Blue-Eyed Plecos were collected from Honda and Cambao. Drivers transported the fishes from the Magdalena Valley, just a few hundred meters above sea level, to an altitude of almost 9,843 feet (3,000 m) in Bogota. I repeatedly tried to educate the collectors and drivers and asked them to be careful, but this didn’t help much—most of the numerous exporters in Colombia shipped these beautiful fishes far too tightly packed and often still chilled.

You should know that an eternal spring, so to speak, rules in Bogota, and it is much too cold for all tropical fishes. The water temperature in the holding tanks of many exporters weren’t adequately monitored, and the fishes, usually packed in simple cardboard boxes or just lying in the vehicle in plastic bags, were subjected to continually decreasing temperatures throughout the long journey up through the mountains. There was no question of quarantine in the randomly heated aquariums in Bogota, let alone the prophylactic treatment that might have increased the fishes’ chances of survival. Normally they were packed and exported right away.

Travels in the Magdalena Valley

In Bogota I was greeted enthusiastically by my good friend Pedro Zea at Eldorado Airport, which has remained unchanged during the more than 40 years I have known it. Now, it is slated to be demolished. Pedro runs what is hands-down the best export station in Colombia, which he established almost four decades ago near the town of Villavicencio in the warm Amazon basin. All of his fishes are acclimated for a month there before being shipped out.

Pedro had reserved a car for me, and his brother-in-law, Antonio Salamanca Barrera, was to be my companion. Every week for 15 years, Antonio transported 500–600 Blue-Eyed Plecos from the Magdalena Valley to Bogota for Orinoco Aquarium, but that ended in the mid-1990s. Antonio and Pedro, and most other exporters and importers, were convinced that the Blue-Eyed Pleco had died out due to environmental destruction, so they were naturally very surprised that I had come to Colombia to look for it.

The road was as full of bends as ever and though it was somewhat improved, there was a corresponding increase in truck traffic. Many hours later we reached La Vega at an altitude of around 3,600 feet (1,100 m), a once-tiny village that has now grown into a veritable town. We then descended to 2,297 feet (700 m) and then climbed again to 5,249 feet (1,600 m), and it was evening before Honda, down in the Magdalena Valley, came into view. This town, too, has grown; it has now expanded to both sides of the eternally murky Magdalena, and the two parts are connected by an iron bridge. The old town has been very beautifully renovated, and we stayed in a nice little hotel there. 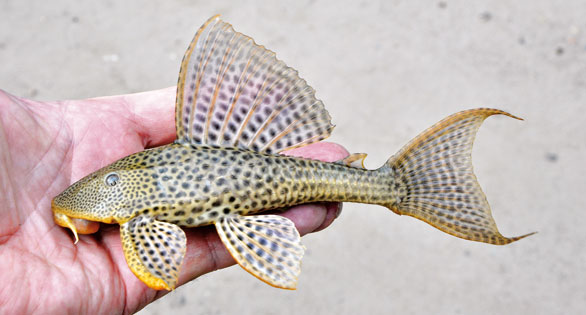 We caught Hypostomus hondae in the Río Magdalena near Cambao.

I wanted to seek out Antonio’s fisherman contact right away the next morning. We made our way through narrow alleys, inquired all over the place, and eventually found his house a long way outside of town. I don’t think he recognized me any more, but he knew Antonio, who had regularly purchased his fishes for 15 years. When I asked him about cuchas de ojo azul, he looked at me and said only that it would be easier to win the lottery than to find a cucha—there were none left and he had long since given up looking for them, since the “American millionaire had poisoned everything.”

When I heard that, I was more than a little surprised, because even Antonio knew nothing about it. The fisherman told us that a little over 12 years ago, an American was there visiting with his daughter. She was stung by a freshwater ray while swimming and fell into a coma. Her father thought he was going to lose his only child, and wanted to avenge her. He had experts develop a poison that would sink immediately in the water and kill the bottom-dwelling fishes—that is, the rays he hated. Tons of it were tipped into the upper course of the Magdalena and killed thousands of stingrays, as well as everything else that lived on the bottom, including the Blue-Eyed Plecos and seven or eight other loricariid species.

Local fishermen kept trying to catch cuchas de ojos azul for around two years, but without success. They gave up trying. In Cambao, further up the Magdalena, another fisherman, Jawel Gomes Perrera, and three others told me the same thing. The American had put the poison in the represa of the Lago Prado and the Magdalena had been full of dead fishes for weeks.

We spent two days in Cambao with Jawel, who nowadays catches only food fishes such as Pseudoplatystoma, Ageneiosus, Pimelodus, Hypostomus, Cyphocharax, and a Leporinus species. Nevertheless, he was prepared to accompany me in my search for cuchas de ojos azul. But we couldn’t find any Blue-Eyed Pleco. We didn’t find anything in the Rio Seco, either. 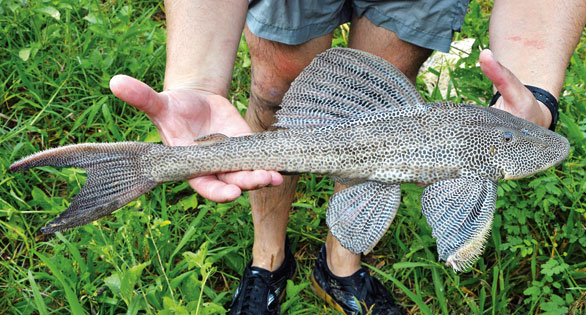 This Isorineloricaria species, very likely undescribed, was a spectacular catch. This monotypic genus had been known only from the west Andine rivers of Ecuador.

The story of the Blue-Eyed Pleco is really tragic, and once again demonstrates what Homo sapiens is prepared to do to destroy aquatic fauna. I also made searches in the upper Río Magdalena in the Departamento del Huila, but without success. However, I did find a population of the Blue-Eyed Pleco, albeit a lighter variant, in the Río Cauca in the vicinity of Tamalameque, before it empties into the Río Magdalena. This variant looks very similar to another blue-eyed species, Cochliodon soniae (L 137), which I found in the middle Tapajós many years ago.

This form doesn’t have such a black body coloration as the form that formerly lived in the Magdalena. When I showed the owner of Stingray Aquarium my lighter-colored Blue-Eyed Plecos, he told me that the lighter form had also been brought back from the region of San Martin de Loba by his collectors. 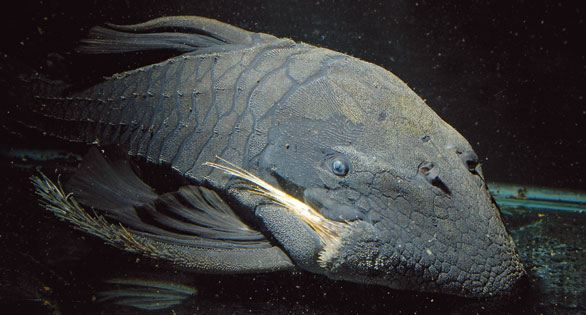 A few specimens of this lighter variant from Colombia have been offered for sale—at $250 U.S. each from Bogota—a serious price for serious catfish breeders only. The average aquarist will have to wait and hope.

Subscribe to AMAZONAS and read this article in its full printed form with additional images.