Fishy WhoDunIt: Who Ate the Hemlock?

It’s a side of a fish dinner that most people will never see, but Haff Disease can be a terrifying malady, mimicking the chest pains of a heart attack, rendering its victims weak, dizzy, nauseated and with urine turned to the color of coffee as the human body sheds its own cells that have been ruptured by an ingested toxin. The victim is suffering rhadomyolysis, or a breakdown of muscle tissue, which can lead to acute kidney failure.

With only a handful of reported cases annually, Haff Disease is usually traced to the consumption of a carp-like Native American fish commonly called the Bigmouth Buffalo, Istiobus cyprinellus, or  on native Louisiana wild-caught crayfish.

Now a researcher in Louisiana says the real culprit could be a common wetland plant,  Spotted Water Hemlock, Cicuta douglasii., well known for its toxicity—only a few ounces of the plant’s roota or fluid-filled lower stem may cause death in cattle, horses, or sheep that sometimes consume the plant.  Humans seldom ingest the weed itself, but tracing the cause of Haff Disease offers a tantalizing example of how complex the interactions between aquatic animals and plants can become.

According to the University of Pennsylvania, “Water Hemlock toxicosis is characterized by the acute onset of violent tetanic seizures that resemble strychnine poisoning. Salivation is followed by muscle twitching that rapidly progresses to seizures, champing of the jaws, coma, and death.” 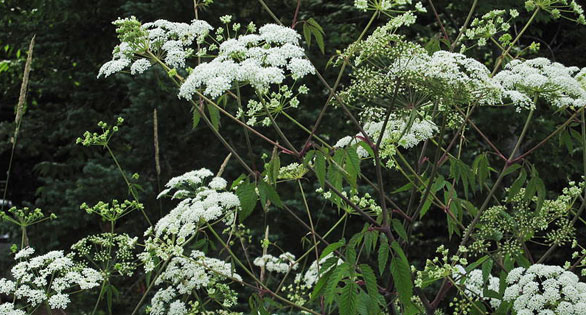 The USDA states flatly: “Water Hemlock is the most violently toxic plant that grows in North America. Only a small amount of the toxic substance in the plant is needed to produce poisoning in livestock or in humans. The toxin cicutoxin, acting directly on the central nervous system, is a violent convulsant. Clinical signs of poisoning occur when a threshold dose is reached after which grand mal seizures and death occur.”

Haff Disease was first studied and named in 1924 after reports of a number of people and animals poisoned by consuming fish from the area of a lagoon (haff) near Konigsberg, Germany (now Kaliningrad, Russia). The fish eaten included burbot, pike and eels, but subsequent reports from New York, California, Missouri and Louisiana have all traced the symptoms to the consumption of Buffalo Fish or Red Swamp Crayfish, Procambarus clarkii.

Writing in a recent issue of the Louisiana Morbidity Report, a state epidemiologist, Mallory A. Becnel, MPH, says that the bottom-feeding Buffalo Fish, as well as freshwater crayfish, may graze on Water Hemlock and become carriers of the cicutoxin. The connection between the aquatic animals and hemlock remains a theory at this point, but the symptoms seen in humans who are diagnosed with Haff Disease match up well with those of animals known to have eaten the toxic plant.

Water Hemlock is a widespread invasive weed, native to North America, that thrives in wetlands along river and stream banks, in marshes, ditches, and wet pastures and meadows. It is a member of the Carrot or Parsley family and has characteristic umbrella-like flower heads (umbels).  It has various sinister common names, including Cowbane, Beaver Poison, Muskrat Weed, and “Musquash Poison.” The Iroquois are reported to have called it “Suicide Root.” (The hollow lower stem and roots are the most-toxic parts of the plant.) 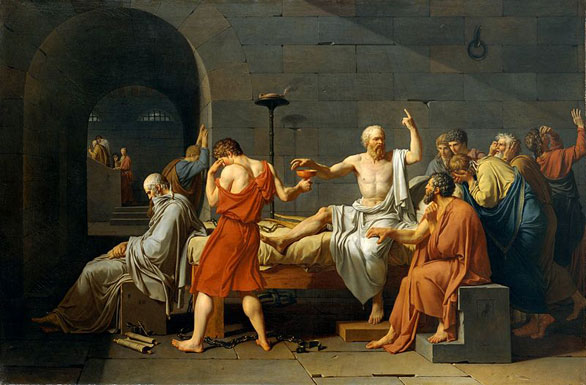 Hemlock poisoning’s most famous victim, the philosopher Socrates (with arm raised) chose to be poisoned rather than flee his native Athens in 399 B.C. Painting: The Death of Socrates, Jacque-Louis David, 1787,
Catharine Lorillard Wolfe Collection.

The most-famous victim of the hemlock family is Socrates, who was executed for “impiety” and challenging the reigning powers in Athens in 399 B.C.  He was given a concentrated potion of Poison Hemlock, Conium maculatum, and his death reportedly came slowly, as his central nervous system failed and he slipped into a state of paralysis.

Poison Hemlock is a native of the Mediterranean region of Europe, Asia, and North Africa, but it has been widely introduced in North America and Australia. Although Water Hemlock and Poison Hemlock are often confused, in any suspected poisoning events of livestock or humans, prompt veterinary or medical attention is imperative. The toxin is not broken down by cooking, and fishermen who target Bigmouth Buffalo say it is a delectable, “clean-tasting” fish.