No fish were harmed, nor were in any danger, during the making of these photos…

The Betta theme of the Friday Photospreads continues. Why? Bettas are simply what’s “new” in my fishroom lately (and yes, I’m working towards a larger finale project – Minnesota’s Betta Mile). Honestly, Bettas make tremendously wonderful photo subjects. Bettas are kind of easy to goad into performing. And none may be easier than the “Fighter Plakats”, the short-finned betta strains bred for strength, endurance, body structure, and general ferocity; the ultimate goal being a winner in the ring. They jump at the chance to strut their stuff. 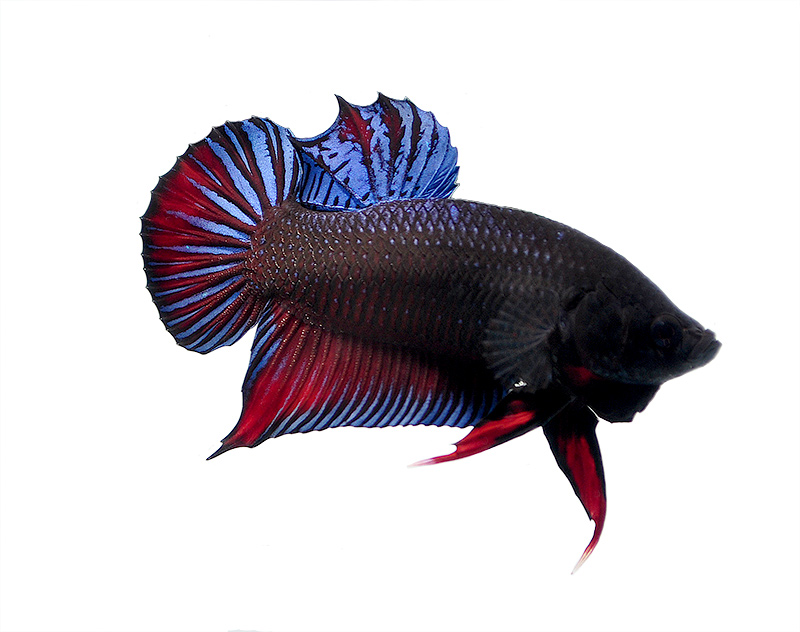 These fish, by design, waste no time in trying to eliminate any opponent. They truly go ballistic on each other. While the Fighter Plakats are not particularly bred for aesthetics, they are quite variable in terms of coloration and shape. This variation may be, in part, due to hybrid origins of some strains. 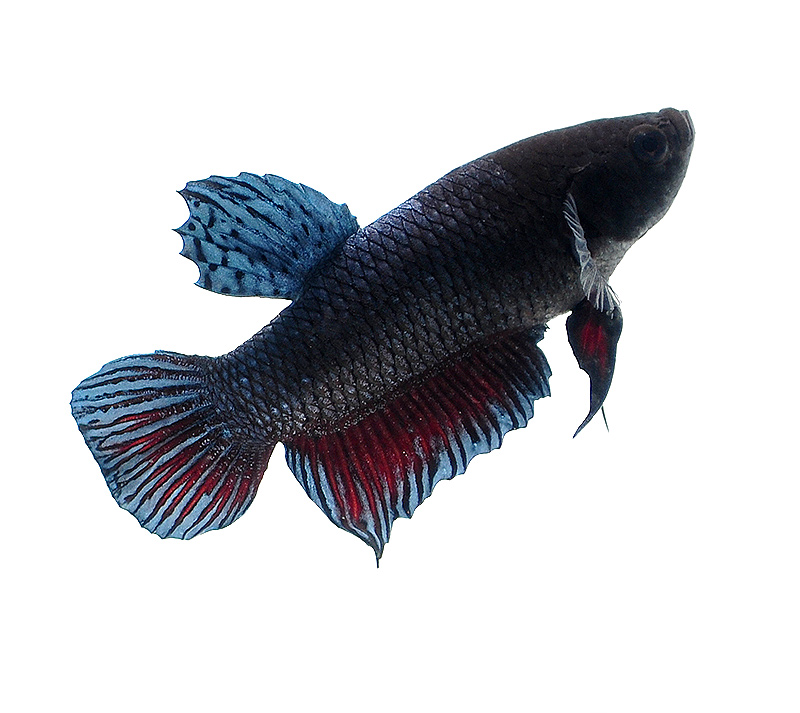 Our second photographic subject, an Indo Bagan Fighter Plakat betta – looks nothing like the first betta, yet both are “Fighter Plakats”

The Fighter Plakats also make up a sizable portion of the specialty Betta market in the US, so while I have no interest in ever fighting my bettas, it made sense to have a couple to photograph (especially because they’re typically kept in round jars at the betta shops and don’t photograph well in that setting).

I should point out that the interest in Fighter Plakats is not strictly limited to fighting. Among many Asian-American aquarists who keep Fighter Plakats, it’s a matter of tradition and nostalgia for their home lands. These are, afterall, the fish they caught as children, the fish they grew up with. For breeders, these fish are considered useful as outcross material that can inject vigor and vitality into a captive line. Still, in scouring through online betta forums, there is no doubt that some of these fish are indeed destined to be fought.

There is undeniable beauty in a riled up Fighter Plakat. When faced with an opponent, they expanding their gills exponentially, their fins fanning out to maximum spread. The ventral fins of ratcheted-up bettas often individually twitch as if there’s at least a screw or two loose. Indeed, they look psychotic, ready to snap. 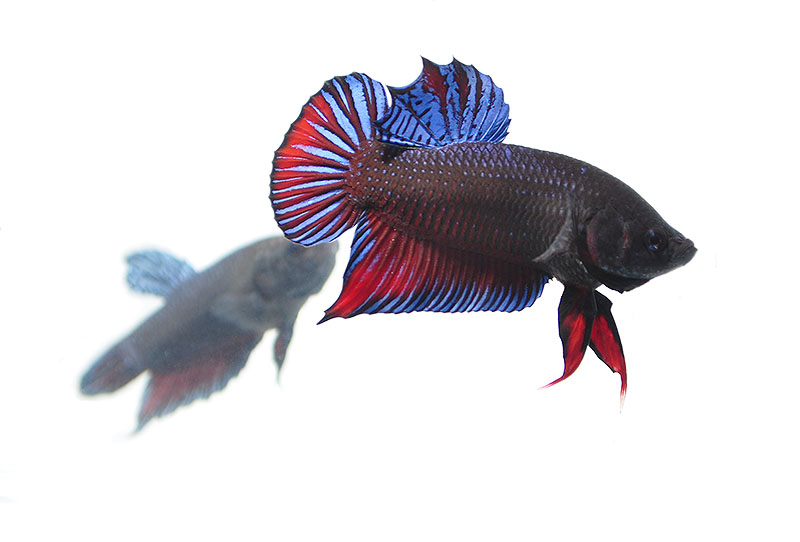 If that threatening display doesn’t get their opponent to turn tail and run, they start to contort their bodies, emphatically rolling and pitching, slamming their tails towards each other, trying to get the better angle and the upper fin. When an attack is launched, it’s a mixed-martial-arts assault where anything goes and it’s difficult to keep up with the action. 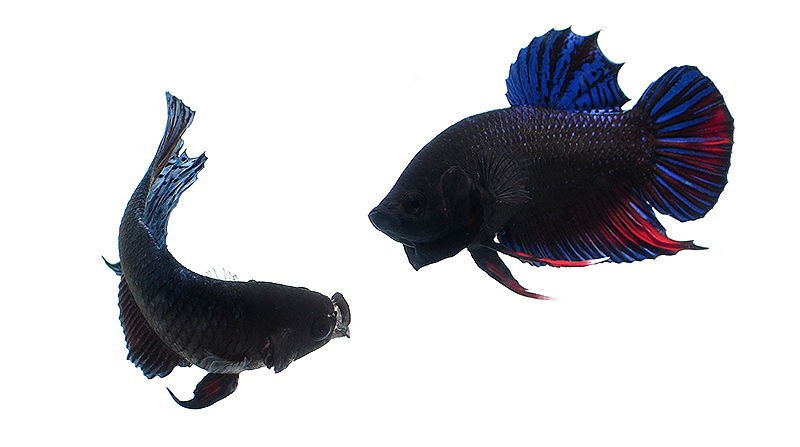 The intimidation between these two fish intensifies.

Of course, it seems as if any in-depth discussion of Bettas must raise the specter of the “Fighting Fish”. It is entirely true; in their native range bettas are bred for fighting, although in my ongoing investigations, I’m starting to get the impression that our western society has perhaps created a mythology around this activity that potentially exaggerates the truth. It may be that the generally held notion that Bettas are “fought to the death” is a belief that feeds upon itself, with irresponsible western children recreating the “last man standing” battles that they’ve heard occur, not realizing this isn’t what betta fighting ever was or was meant to be.

Meanwhile, as I’ve read through ever more literature originating from authors of Southeast Asian origin and spoken with Thai Betta keepers and breeders, it seems that the truth of betta fighting might be far different from what we believe it to be. I’ve heard justifications that bettas bred for fighting are actually far better off than the bettas sold in deli cups at the local mega mart. With the mentality that the “Fighter Plakat” is an athlete, a fish that is conditioned with excellent care and feed, a fish that is trained through mock battles, you start to realize that yes, maybe in the time leading up to the “fight”, such a fish is truly better off. Not sure that still rings true once the fish “swim into the fighting ring”.

Neither fish backs down.

When you look at the purported tradition of fighting bettas in Asian cultures, you further learn that these fish are most definitely not intentionally or routinely fought to the death. Instead bouts are decided the moment one fish chooses to flee or otherwise show signs of defeat / no longer wishing to fight. Matches may be timed, with a series of rules or tests used to determine winners in the case of a draw. Owners are also permitted to end the fights at any time, and in some arenas very complex rules seem to preside over the fighting, making it far less of a bloodsport and certainly preventing fatalities (owners of fish who allow their fish to be killed are even subject to fines). Fish that are damaged in battle are even nursed back to health (although I’m somewhat skeptical that this occurs with all fish, but certainly the “repeat champions” don’t get that way by dying in the ring, or thereafter due to lack of care or consideration). It seems that gambling might well be a more important part of the “sport” than the actual damage inflicted upon the participants of these matches. 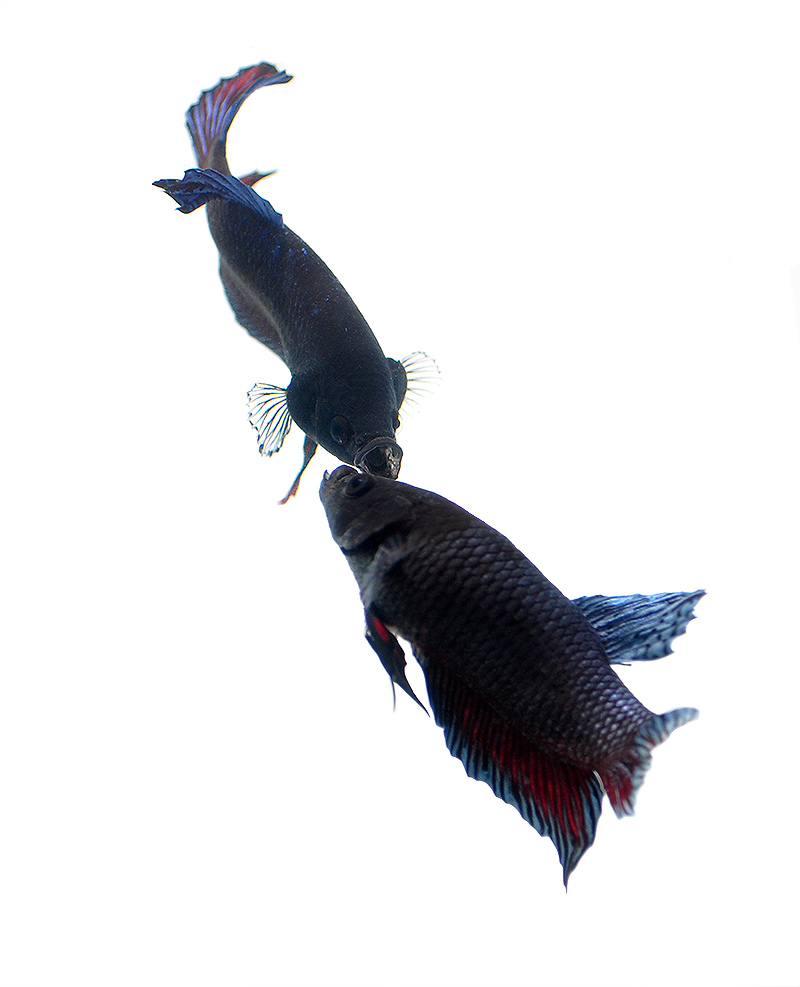 Fighter Plakats live up to their reputation, being fearless when facing an opponent.

It also bears mentioning that bettas bred for fighting are actually reared communally, and it is only upon segregation that these fish become overtly aggressive and murderous. Combine this with the fact that in many areas, the bettas fought are not even necessarily intensively bred, but instead are collected from the rice paddies and ditches where they occur, and are then released thereafter. Bettas may be casually cultured in feral settings, where a season’s winning fish are released in a private location, the hope being that come next season a new crop of offspring derived from past champions can be captured for fighting.

Still, these days, in our Western culture, you’ll be hard pressed to find anyone that condones the notion of fighting fish for sport or enjoyment. This activity seems uniformly frowned upon and is legally dubious. I detest the notion of intentionally allowing fish to inflict wounds upon each other as any form of “entertainment”. And yet, I cannot deny that seeing a Fighter Plakat hurling itself into battle is awe inspiring – the intensity of such a tiny fish is amazing. I wonder if there is a way that one day actual fighting (that occurs in cultures where it is permissible) could be replaced by something equally exciting, but without all the actual risk or damage to the fish. Probably not.

And yet, aggression is simply part of the nature of the betta; seeing my females after a lusty afternoon under the bubblenest strongly suggests that Bettas like it rough…very rough. No doubt, the occasional female is lost to an aggressive male in every breeder’s efforts. It’s interesting that we’ll tolerate one form of aggression among our fish and gladly permit it to continue even when death is a risk, while that same aggression when more closely observed and readily stopped by observers, is intolerable. From the Betta’s perspective, I wonder if there’s really any difference. For them, they’re just doing what’s instinctively natural. 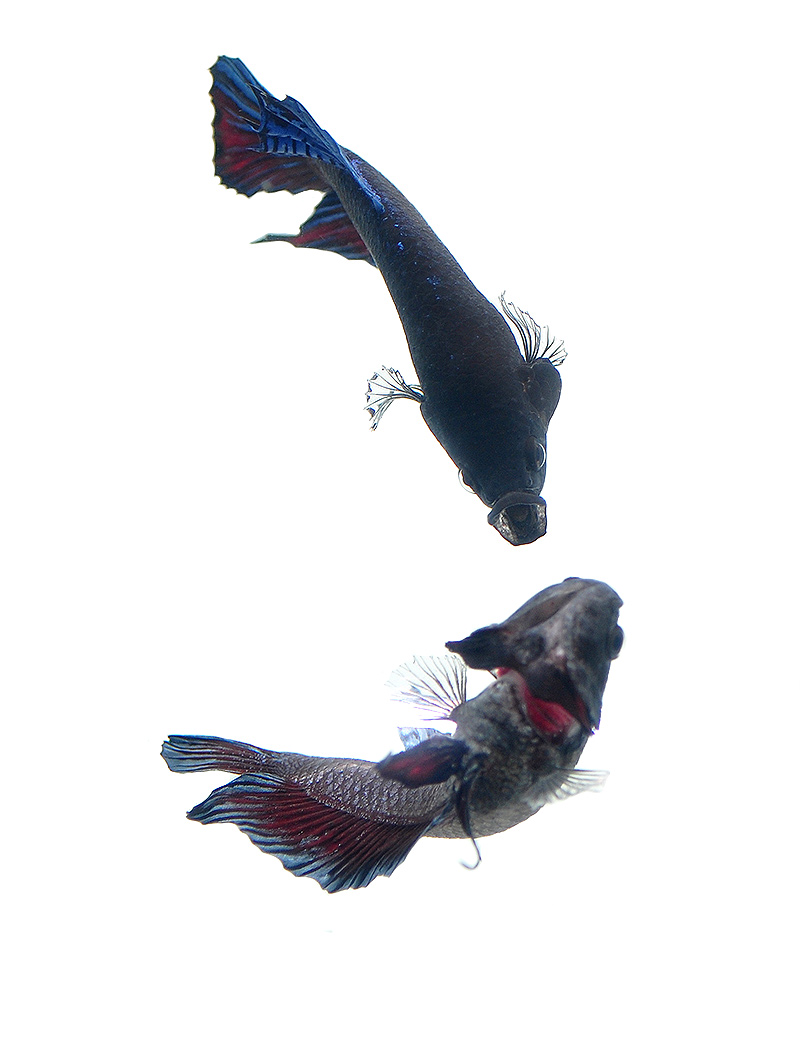 A daring attack from above and a bold, threatening, gill-flaring defense from below- anything goes in the world of a male betta.

So when it comes time to capture the essence of what a Fighter Plakat is, simply photographing the fish at rest is about as anti-climactic as you can get. But actually allowing the fish to fight just so you can get the shot isn’t an ethical option either. The photos may look intense, as if shot just as fighting started. Thankfully, that’s not how they were created.

It was easy enough to stage a mock battle; one fish placed in a 2.5 gallon photo tank, the other also placed inside, but protected by a gin-clear, brand new 0.25 gallon specimen cup. In every photo showing two fish, they are separated by the invisible plastic wall of the specimen cup; a little post-production Photoshop touch-up ensures you’d never know it was there unless I told you. You get to see all the beauty of the battle, without the associated damage being inflicted on by the fish upon each other. Still, the intensity of their attacks audibly echoed through my fishroom as the bettas bit and rammed the specimen cup that kept them safe and separated. 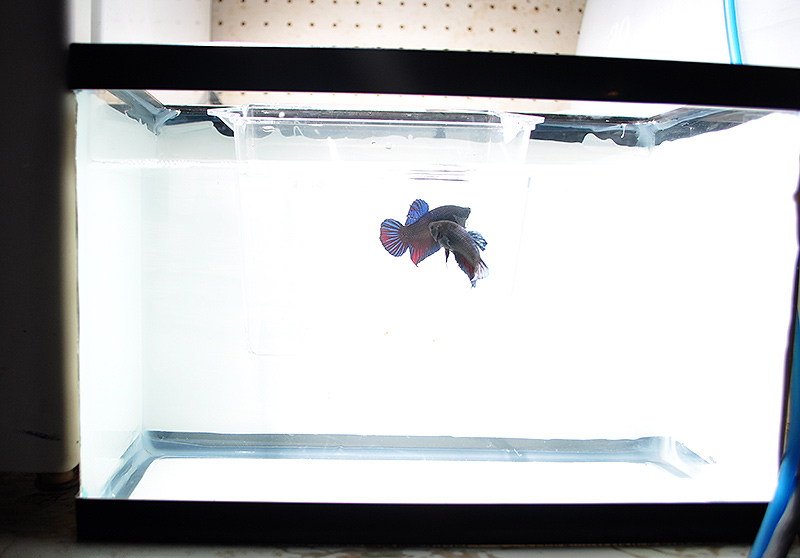 The specimen cup inside the 2.5 gallon photo tank allows for interaction without any risk to either fish.

As an interesting side note, it turns out that it’s common practice to keep bettas in complete visual isolation, routinely removing visual barriers to allow the fish to “flare” and “dance” (to get their daily exercise) without coming to any harm. This practice (often referred to as “carding”) has a very practical upshot – the fish are more active and more healthy, but the real bonus is that it encourages top quality fin growth and fin spreads (important when you consider that a “halfmoon” can only be really considered as such if the tail fans out to 180 degrees or greater). 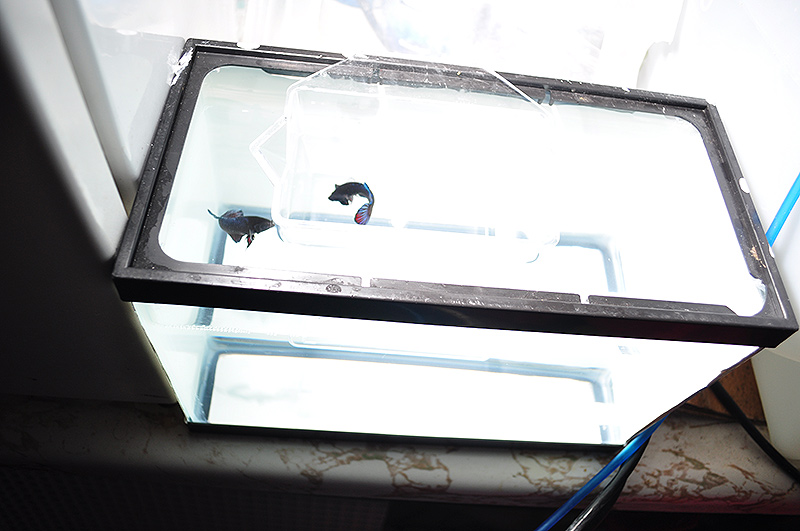 A top down view of my Betta photo setup.

While I tried this photographic setup first with the Fighter Plakats, ultimately this is the staging I’ve used for all my betta photography when I want a fish flaring. Select two fish, throw one in the cup and focus on the fish that has run of the tank. Then swap spots and shoot the other fish. It’s just that easy. They put on a tremendous show for the camera.

All images by Matt Pedersen

Additional Reading – Check out PlakatThai.com for extensive insights into the betta breeding and fighting culture of Southeast Asia, from the local perspective of Mr. Precha Jintasaerewonge who traveled the region extensively to document the culture.