Farming Arowanas Where Coca Once Grew 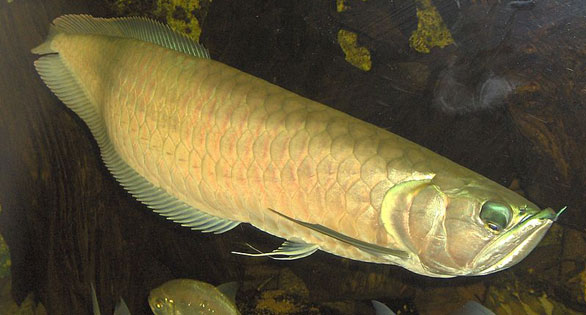 As the keeping of tropical fish is emerging as a boom in Asia, especially among China’s exploding middle classes, some South American aquacultural entrepreneurs are racing to meet the growing demand for exotic aquarium fishes.

In Colombia’s Caqueta Province, once a hotbed of illegal drug production, land previously used to grow coca is being converted into ponds for breeding and raising the Silver Arowana, Osteoglossum bicirrhosum.

Known as Dragonfish in China, arowanas have long been revered for their magnificent size, prehistoric anatomies, and elegant beauty. Asian arowanas are extremely endangered in the wild, owing primarily to habitat destruction, and have been protected since 2006 by a CITES ban on their collection and trade. Only second-generation (F2) captive-bred Asian Arowanas may be sold and typically fetch princely sums from well-heeled buyers. 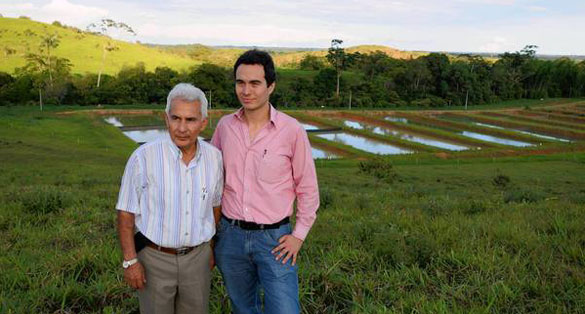 The South American Silver Arowana is not listed by CITES and is not considered endangered, although its wild populations have been greatly diminished by habitat losses and overfishing for food uses, and both Brazil and Colombia have enacted seasonal fishing bans.

To meet the demand among fishkeepers for legal, farmed arowanas, a consortium of investors led by Alvaro Marles has purchased 1,000 acres of land in the Amazonas region of southern Colombia and dug an initial 22 ponds for Silver Arowana culture.

According to a recent article by Chris Kraul in the Los Angeles Times, government programs in that part of Colombia are also supporting some 300 families to engage in fish farming. “Many of them are farmers who formerly grew coca, the illicit raw material of cocaine, or citizens displaced by 40 years of armed conflict in Colombia,” Kraul reports.

In addition to arowana, there are plans to produce the giant Arapaima or Pirarucu, Arapaima gigas, which is esteemed for its eating qualities and has been severely overfished in much of its range.

Known as Amazon’s International Trade (AIT), the new corporate arowana farm near Florencia, Colombia says it will ship 20,000 Silver Arowana juveniles to China, Singapore and Japan this year, with an ambitious goal of producing 100,000 Osteoglossum bichirrhosum per year by 2015.

“The Chinese see them as part of their culture,” Marles told the Los Angeles Times. “They call them dragonfish because they resemble mythical dragons that symbolize good luck and protection against evil spirits.”

Dragonfish, especially when kept in groups of 9, are believed by the Chinese to bring good fortune, ward off demons, and are an unmistakable status symbol. The current retail price for a small Silver Arowana in Hong is $40, according to Nicole Liu, who contributed to the Times article.

The governor of Caqueta Province in Colombia foresees an export market of a million arowana a year by 2016. Aquarists in North America and Europe are also likely to see increased availability as arowana farming develops in South America.

Family
Osteoglossidae (Arowanas)
Ten described species:  four from Asia, three from South America, two from Australia, and one from Africa.

Overview
Arowanas are large, athletic fishes with prominent scales and an underslung lower jaw with a pair of barbels and a huge gape. They are referred to as “living fossils,” with anatomical features that can be traced back some 150 million years to the Jurassic Period.
Their ability to jump from the water to grab large insects and birds from low-hanging branches has earned them the nickname “Water Monkeys.” There are reports of Silver Arowanas leaping almost two meters (6 feet) from the water when attacking prey animals. With exceptionally large eyes, they are believed to have extremely sharp eyesight. They are solitary fish, except when in reproductive mode.

Size
Maximum length: 122 cm (48 inches), maximum weight: 10 kg (22 lbs). Maximum sizes are the subject of debate. The University of Hawaii has pond-raised broodstock that reach a maximum 122 cm (48 in) in length. Sportsmen have reported (unofficial) catches of Silver Arowana weighing 10 kg (22 lbs). Fishbase lists the maximum length at 90 cm and the weight at 6 kg.

Feeding
Omnivore. Feeds primarily near the water surface, where it preys on smaller fishes. It will leap from the water to catch large beetles and birds. In the aquarium, it will take live feeder fish and floating foods but will ignore sinking pellets. Captive arawanas have been filmed eating small mammals, including mice, rats, and rabbits.

Aquarium Keeping
An adult fish will require a tank of at least 200-300 gallons (757-1,135 liters). Any aquarium holding an arowana must have a strong, firmly attached or weighted cover. Some arowana keepers believe a minimum tank size should be 1,000 gallons (3,785 liters).  Tank footprint needs to 6-8 feet (180-240 cm) in length and 24-30 inches (60-76 cm) wide. Keeping an arowana in too-small quarters can result in stunting and body deformities. There should be minimal aquascaping and maximum opening space for swimming.
Water should be clean, well-filtered, soft and acidic, with temperatures in the range of 75-82 F (24-28 C).
Tankmates must be a minimum of 12 inches in length, and some species able to share space with an arowana include Pacu, Oscars, Jaguar Cichlids, Tinfoil Barbs, and large Plecos and other big catfish.

Reproduction
Requires a very large aquarium or pond, where a group of juveniles can be raised together until one or more pairs form.  Sexual maturity comes at 3-5 years of age. Males mouthbrood the eggs and fry for 50-60 days, and the young emerge at the large size of 2-3 inches (5-8 cm) with a yolk sac still intact. According to aquaculturists at the University of Hawaii, “broods range from 12 to 30 fish.” 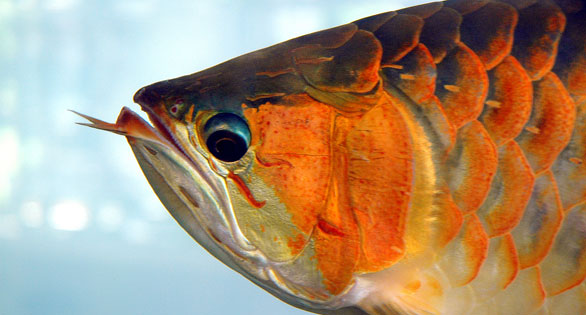 Conservation Status
Not listed by CITES or the IUCN Red List. It is, however, known to be overfished for food usage. Both Brazil and Colombia have instituted seasonal fishing bans.

The Asian Arowana, Scleropages formosus, also  known as the Asian Bonytongue or Dragonfish, was listed in 2006 as endangered on the IUCN Red List. Its international trade is restricted by its listing as a CITES Appendix I species.  The decline in wild populations is blamed primarily on habitat destruction. Farm-raised Asian Arowanas have been produced for a number of years, and certified captive-bred S. formosus can be legally acquired in some countries. The United States, however, has placed the species on its Endangered Species List and possession or trade are illegal without a permit. A number of different color varieties or haplotypes are known, including green, silver, blue, and the highly prized golden and red arowana.