Friday Photospread – Think Inside The Box

There is, of course, the undeniable truth of being a fish addict: If you can find a way to add more fish, you’ll do it.

And I found a way. When you have no room for glass, go with plastic. Shoeboxes. Preferably ones that can easily fit on top of your existing aquariums!

6 qt. shoeboxes that happened to fit right on top of my pre-existing tanks!

What can live quite happily in shoeboxes?

Of course, putting bettas into a bunch of shoeboxes is not about randomly keeping more fish…it’s about learning something new. I wouldn’t have thought, all things considered, that you could quite literally breed bettas with nothing more than a few plastic shoeboxes. Once I supplemented their regular diet of of pelletized Betta food with frozen Daphnia and prawn eggs (Nutrimar Ova), the females came into condition quickly, and before long, I was slapping notes on shoeboxes that read… 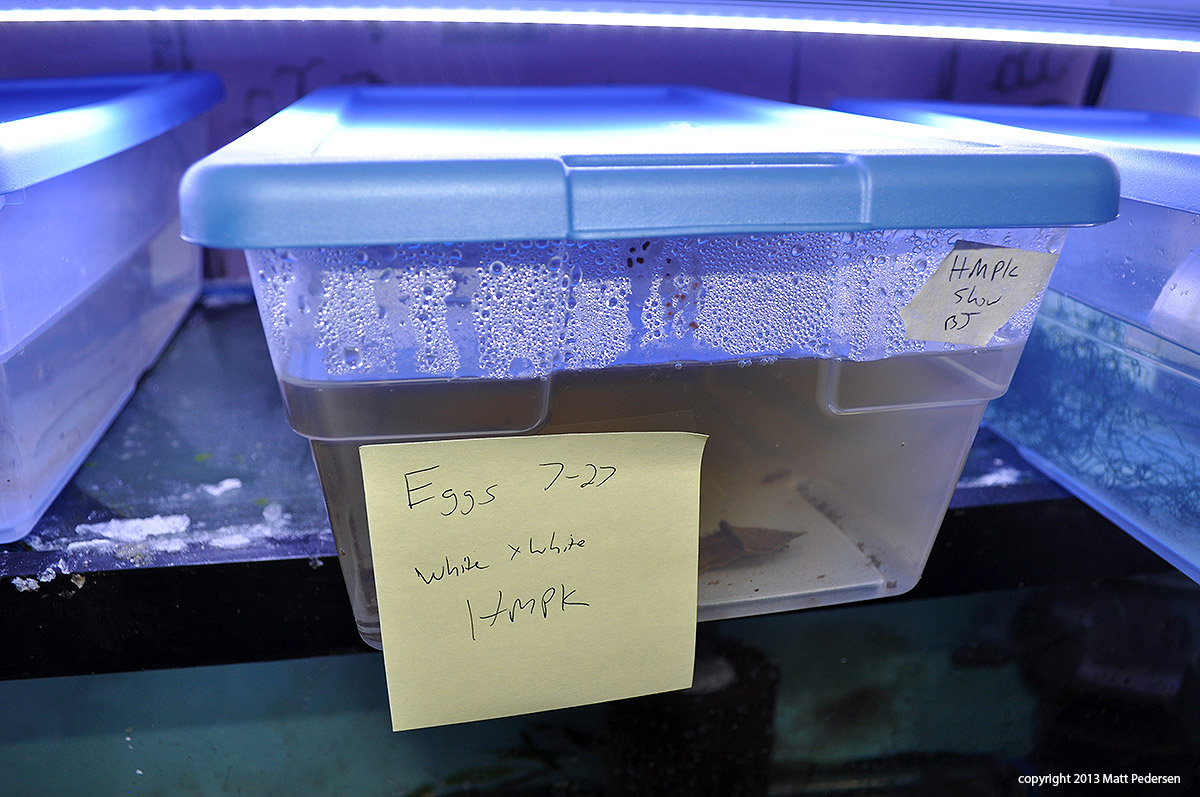 Eggs! In nothing more than a 6 qt. shoebox!

When I was looking around the Internet for photographs of betta eggs in nests, I found it difficult to tell at first what I was looking for. Well…these two photos show off the opaque, white eggs of a betta pretty well. 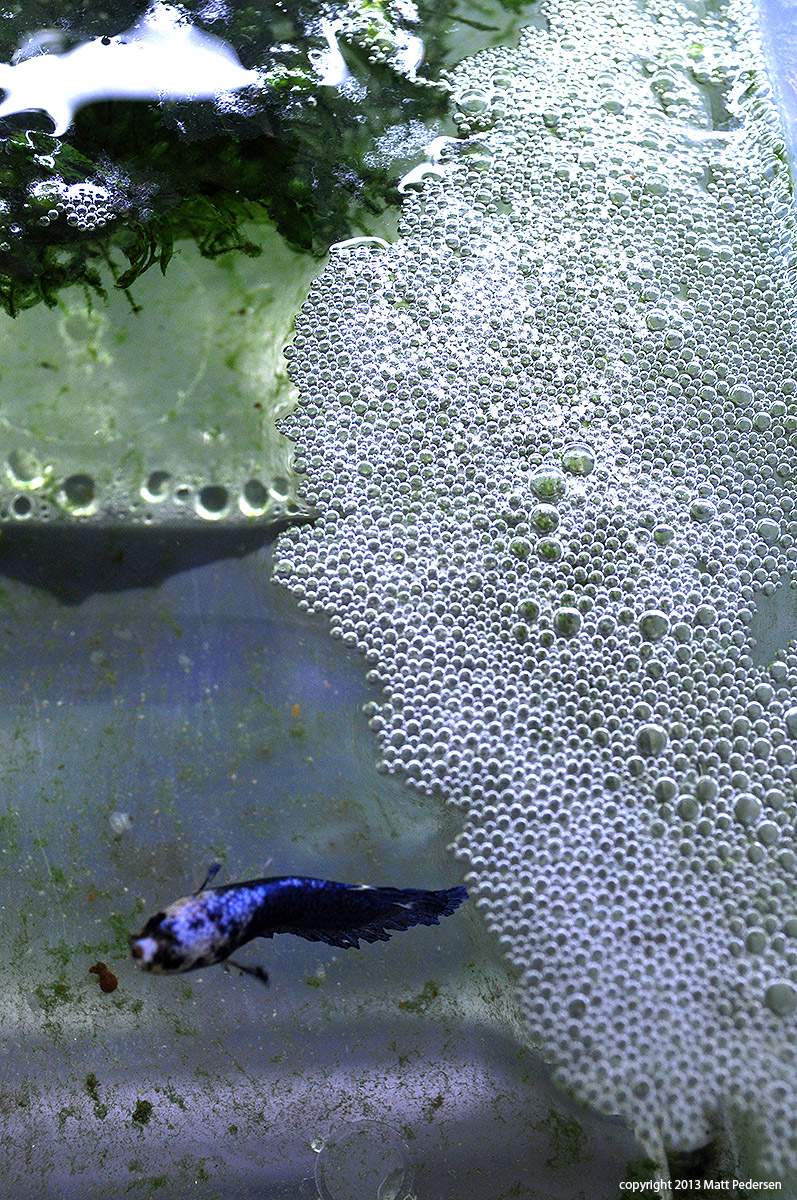 The opaque white eggs are clearly visible in the upper portion of this bubblenest. 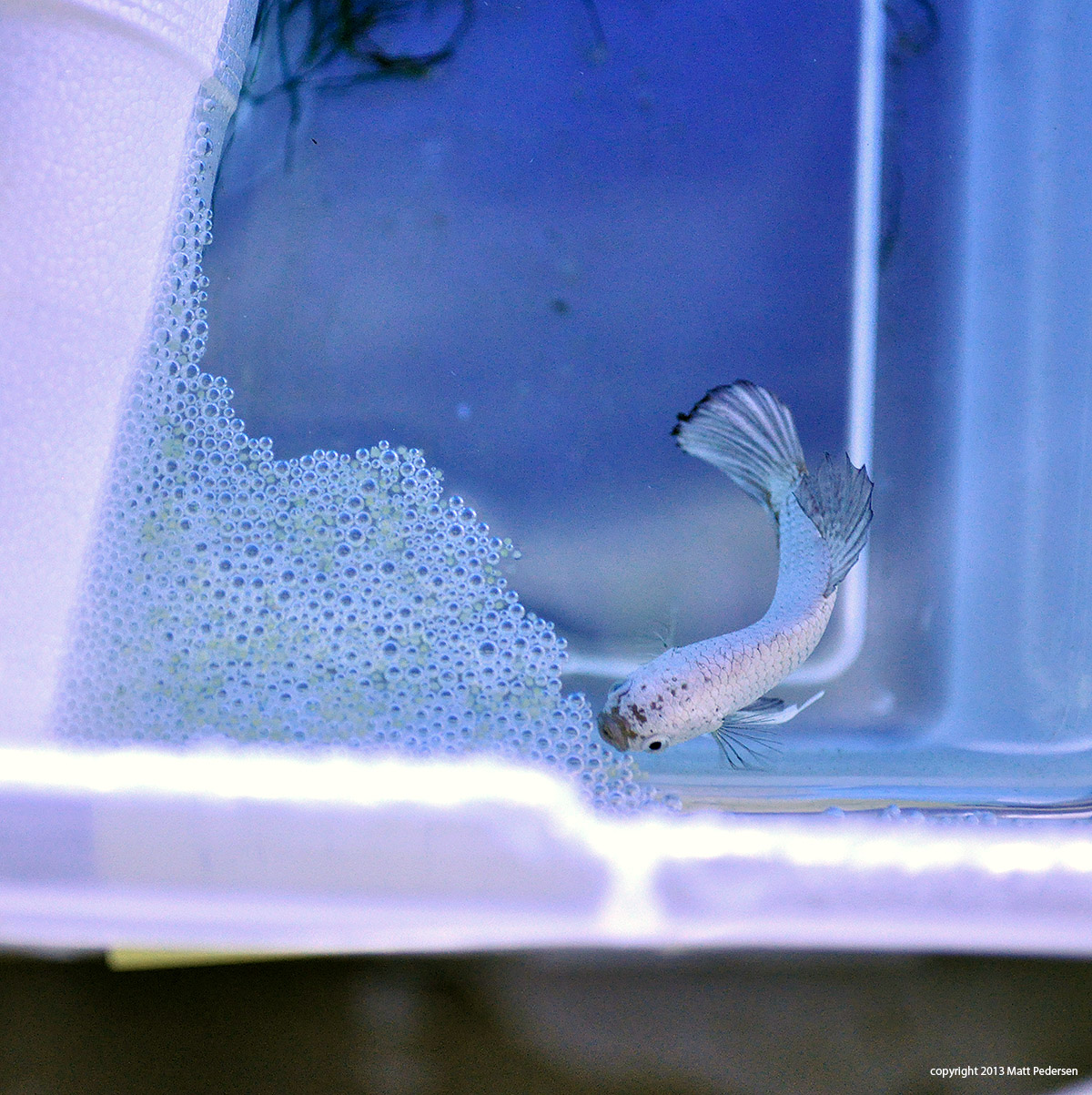 Here again, clearly visible opaque, off-white eggs are being tended by a Thai-bred male Black Dragon Halfmoon Plakat Betta.  View these images at full size to really get a good look at what they look like.

Turns out most of my male bettas are very good fathers… 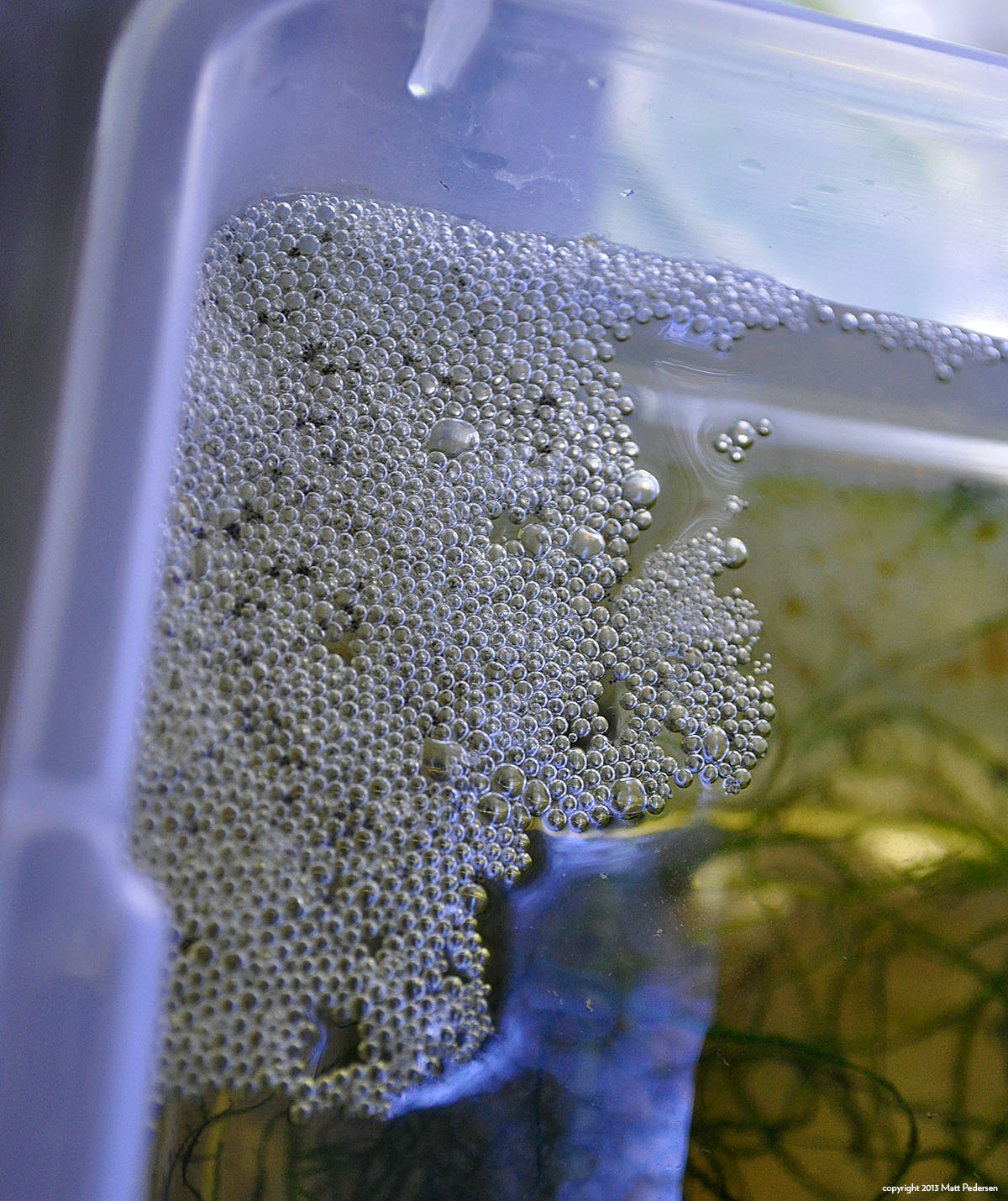 A couple days later, pairs of tiny eyes stare up at you from the bubblenest; these happen to be the eyes of Betta mahachaiensis.

Once the eggs hatch, and the fry become free swimming, most of my male bettas remain steadfast in their devotion to their offspring, refraining from consuming them for at least 24 hours… 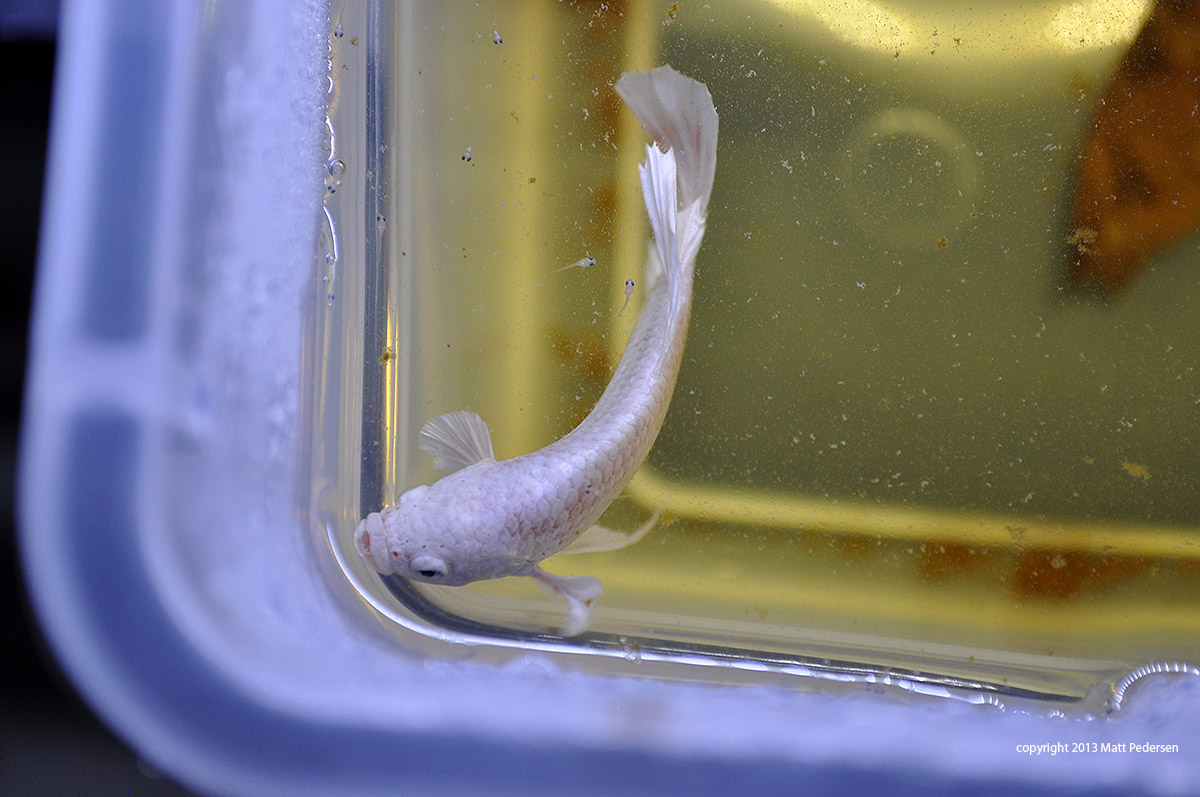 A male white halfmoon plakat with his progeny. 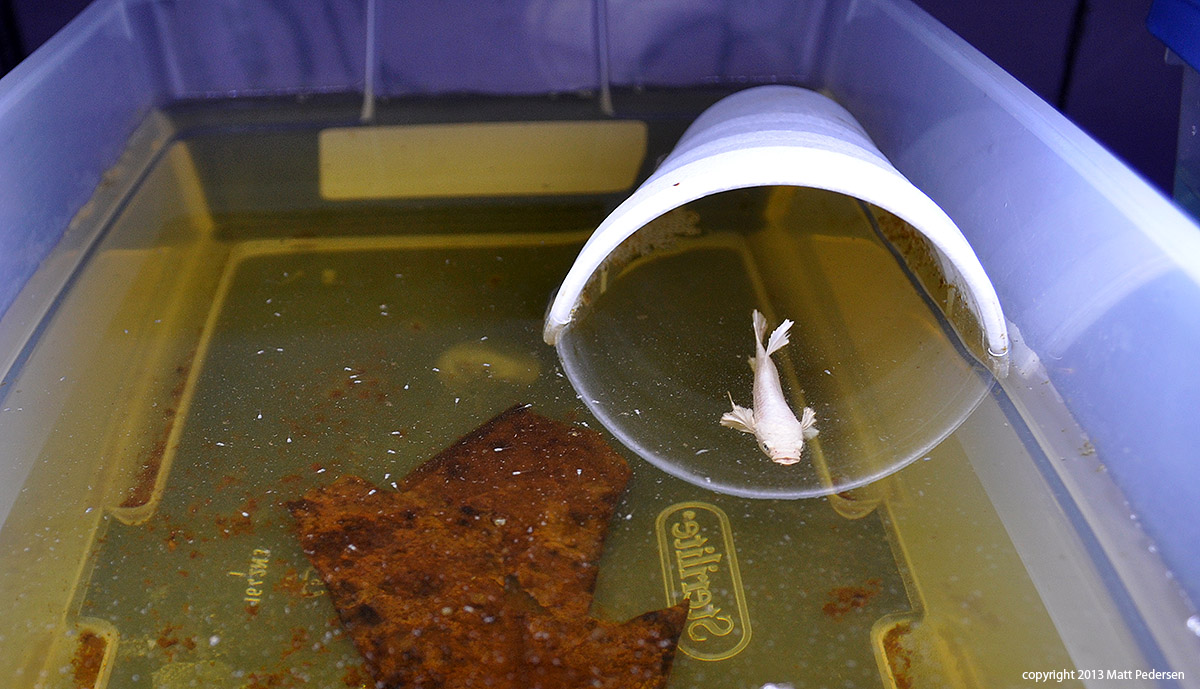 Turns out this male has his fins (and mouth) completely preoccupied with dozens of youngsters to watch over.

In researching early betta rearing, information ran the gamut regarding first feedings; brine shrimp nauplii, microworms, vinegar eels, and powdered fry foods were all offered up as potential first foods.  In truth, I tried them all, and it seems that diversity of offerings is more effective than a single food source.

I found myself deferring to a powdered fry food for a first-day feeding, as well as an inoculation of vinegar eels.  The vinegar eels are said to be capable of living up to a week in fresh water; far better than the 24 hours a microworm lasts.  Additionally, the vinegar eels are smaller and swim in the water column, whereas the microworms rapidly wind up piled on the bottom, where they die and decay if not eaten.  With Betta pairings throwing up bubblenests and filling them with eggs even when I don’t want them (particularly my wild Betta mahachaiensis and B. smaragdina “Guitar” pairs which are peaceful and can cohabitate), I quickly found my multiple vinegar eel cultures seriously depleted!

That said, my friend and fellow marine fish breeder, Rob Topping, happened to have a lot of experience in the past with breeding and rearing bettas. As I tackled this project, he relayed that he would rear his bettas exclusively with baby brine shrimp. I wouldn’t have believed it until I tried it. Sure enough, as long as you don’t let those brine shrimp nauplii go through their first molt, it seems even the youngest bettas are capable of tearing them up.

As the fry grow, I’ve added APBreed’s TDO, a marine fish larval feed that comes in a range of sizes. This is their first inert diet, but I absolutely persist with baby brine shrimp. I also start using more microworms as the older fry consume them quickly. Within several weeks, the tiny fry that started smaller than a baby clownfish, have grown rapidly into juveniles showing coloration. 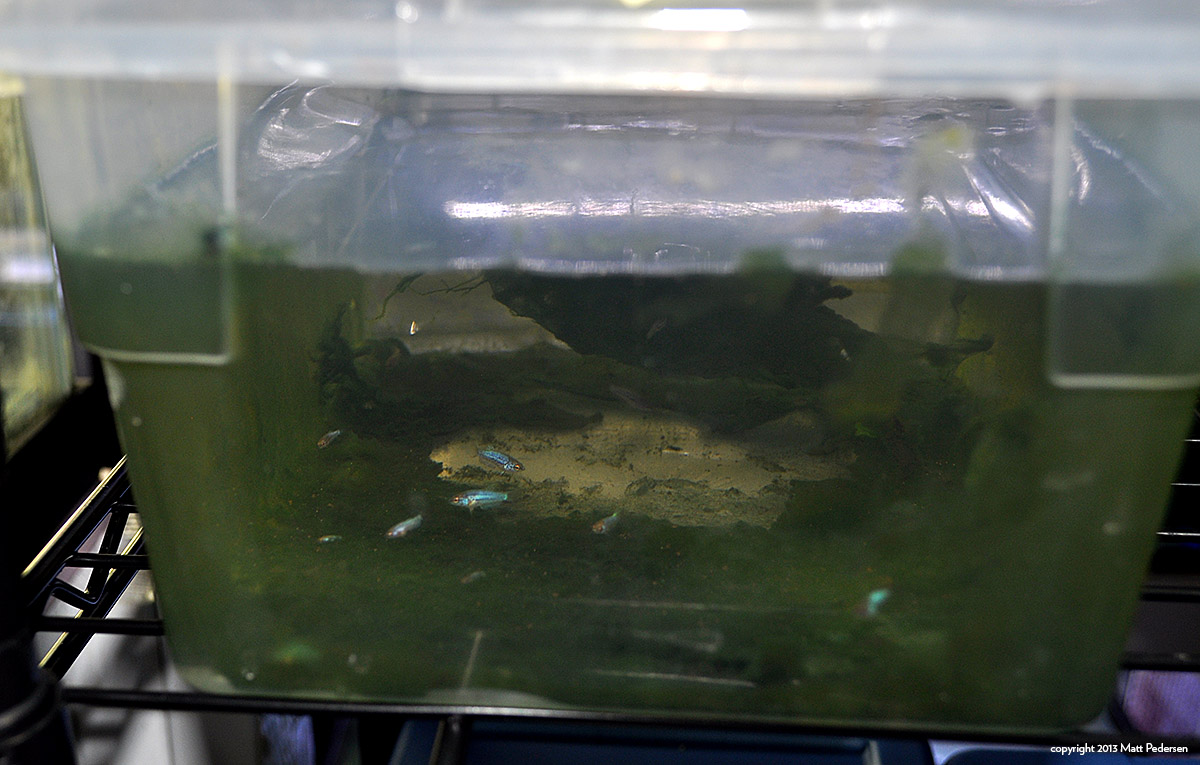 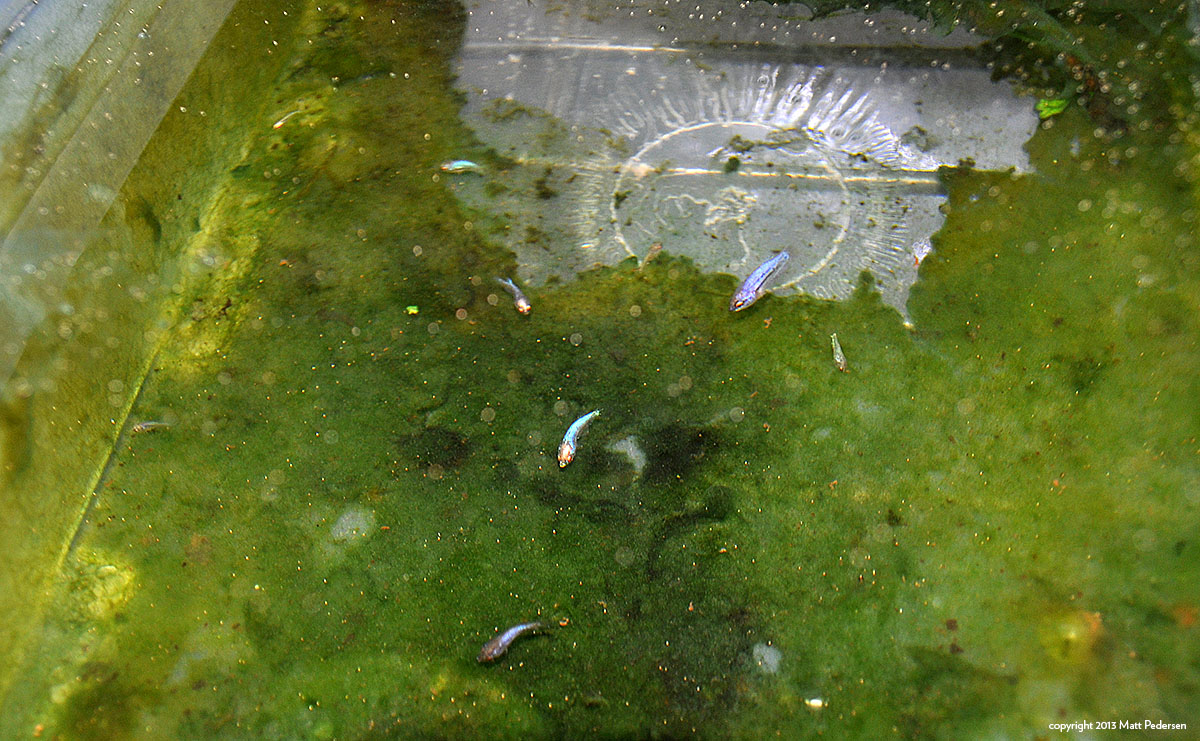 It will be interesting to see what they grow up to look like!

It’s clearly possible that you could rear bettas with nothing more than a warm room, a few shoeboxes, and a bunch of drinking cups to segregate the babies as they grow. While this doesn’t seem to be the preferred or “American” way of approaching betta culture, many reports have suggested that such “flexible” and “frugal” setups are commonplace in other countries and are quite effective.

I’m pretty sure you can’t raise hundreds of bettas in a handful of shoeboxes, but it seems you can end up with a few dozen offspring per brood without much trouble. 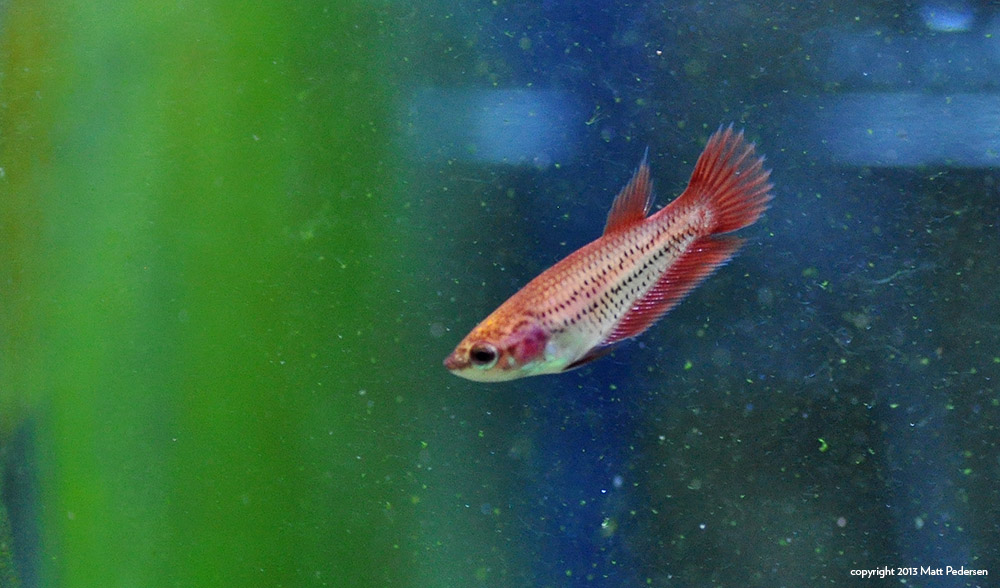 A young Red Veiltail Betta from one of my very first spawns this summer.

I’d be remiss if I didn’t explain my basic husbandry. Ambient temperature in my fishroom is 78-82F, so I do nothing for temperature maintenance of the bettas. Ornamental males are kept singly, with females living in “sorority” groups (I’ve had no issues with 4-5 females in a 6 qt. shoebox). I keep low-light plants like Java Moss and Java Fern in each shoebox.  Weekly 100% water changes have been well tolerated by the domestic forms; my wild species bettas seem stressed with 100% changes, so 50-75% is normally what I do with them. Water changes seem to spur the males to build fresh bubblenests.

Early on I had problems with new fish developing outbreaks of velvet; once I started adding 1 to 2 tsp. of marine aquarium salt per gallon, this problem went away and has yet to return.  The only other health-related issues stem from males being abusive with their mates; the use of Captappa (aka Indian Almond) leaves, particularly in the female sorority tanks, has helped prevent bacterial issues in females following the often brutal mating ritual.

As I mentioned earlier, the adult fish are given a stable diet of commercially available pelletized betta foods, one small feeding per day. This works fine for a maintenance diet, but it seems that the bettas really need the occasional feeding with frozen or live foods to kick them into spawning condition.  Keep that in mind if you have reluctant pairs and are only feeding dried food offerings.

As far as actually pairing them up and mating…well…that is a subject for another time perhaps.

I found the expansive online library of articles at BettySplendens.com to be very informative and insightful. Consider that the site offers no less than four distinct methodologies for “breeding bettas;”  there is absolutely no right or wrong way to do keep and breed them. Find what works for you, and enjoy!

If you’re looking for something simple and compact, a betta project could be just what you want! If you’re ever looking to squeeze in a few more fish, run to the nearest big box or hardware store and grab yourself some shoeboxes! 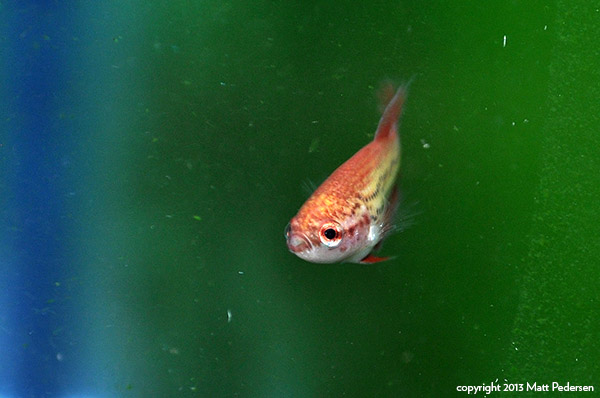 In a few more weeks, this young betta could be at market size – they really grow up fast!