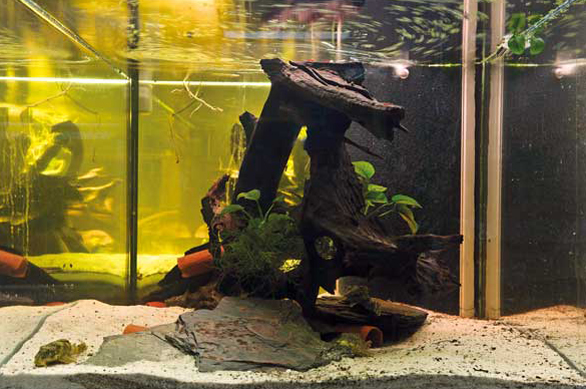 Breeding loricariids from the Rio Negro drainage area can be tricky, but we have had success with Peckoltia sp. L135 (aka the Worm-line Peckoltia), a regularly imported armored catfish from the Rio Demini, a clearwater tributary of the Rio Negro

We acquired four specimens of Peckoltia sp. L135 in early 2009 not knowing it would take us more than two years to achieve breeding success. This species is now identified as Peckoltia braueri (Eigenmann, 1912), and often referred to as the Worm-line Peckoltia, for the fine vermiculations that decorate its head region. Its native distribution is in the Rio Negro tributaries of Rio Demini, Rio Branco and possibly others. 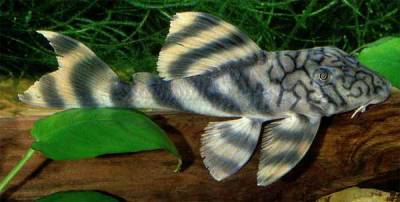 We decorated the tank with a mangrove root, which we placed in the center, and several clay caves of different sizes with slates on top to shade them. The caves were positioned so that their entrances were visible; most had a single entrance, but one of them also had a side entrance. There were no other tenants, apart from some Red Cherry Shrimps (Neocaridina davidi) and Ramshorn snails. The aquarium was illuminated with two 15W fluorescent tubes.

The catfish were truly magnificent, and they had plenty of space to move around in the aquarium. Watching them scour the tank for food was a feast for the eyes. We offered them mainly frozen food (black and white mosquito larvae, brine shrimp, and Mysis), as well as various tablets and granules, and in the summer they got fresh zucchini from the garden.

We maintain numerous species of armored catfishes and of course, we breed them whenever possible.

We were first successful with L135 in 2011. From early August to early November 2010, no water was changed and we replenished only with evaporated water. We fed sparingly, only every third or fourth day. In early November, we raised the filter performance slightly and substantially increased the amount of food offered, especially frozen foods and high-protein catfish tablets. For two weeks, we performed daily 70 percent water changes. In early December 2010, water changes were reduced to 40 percent of volume per week.

In early December, we visited Mr. Eichelberger in Tyrol. He had three extra Peckoltia sp. L135 specimens, about 3.5 inches (9 cm) long, and we added them to our small group. Initially, there were some quite violent fights among the seven animals for the best territories. During one of these territorial conflicts we lost one of the three new catfish. We found it chewed up in the cave that had a side entrance, which we then removed.

Soon, we noticed that the males had developed distinctive odontodes. They were also darker than they had been a few weeks before. We figured that we had four males and two females. The females had become plump, and we were sure they were gravid. 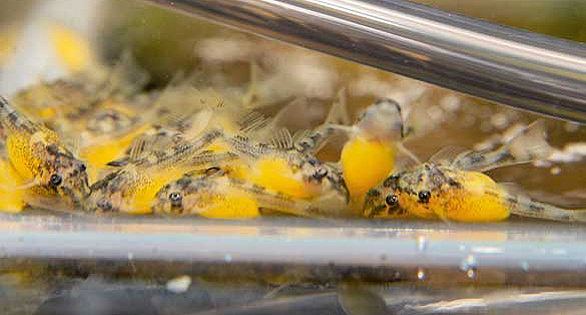 In early February 2011 we noticed that one of the males was never venturing out of one of the centrally located caves, even during feeding. We turned the light off because we did not want to disturb him. A week later, we discovered three- or four-day-old larvae on the side of the tank. The water parameters that day were pH 6.8, 7°dGH, 4°dKH, 200 µS/cm.

We decided to remove the cave and transfer the larvae into a small refugium that was hanging in the tank and contained a Terminalia catappa leaf, a piece of mangrove wood, and some Malaysian Trumpet Snails to clean up uneaten food. We started out with 22 larvae, but 5 of them did not survive. Over the next nine months, the remaining 17 juveniles grew to a size of 2.4 inches (6 cm). 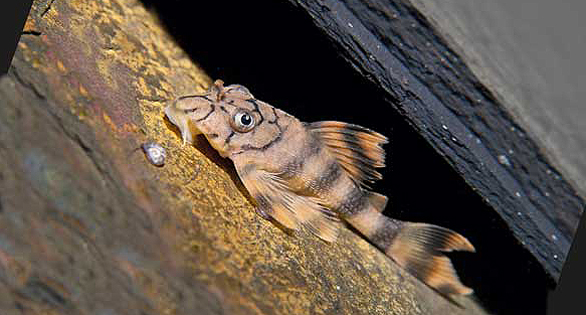 For rearing we used Cyclops, grated green food tablets and, during the first three weeks, CYCLOP-EEZE. The fry initially grew quite quickly. After they had reached 1.6 inches (4 cm), their growth rate slowed somewhat. The eye-catching worm-line pattern on the head could be seen early on. Rearing them posed no major problems.