I am so lucky to be part of a great aquarium club, the Capital Cichlid Association, which meets in Silver Spring, MD.

This past weekend, we had our second of what will be an annual convention called Aquamania 2: The Big Fish Deal, held in Gaithersburg, MD. Speakers included Anton Lamboj of Austria, presenting on the C.A.R.E.S. Fish and Conservation Preservation Program as well as West African species; Pam Chin of California presenting on her travels to and the fishes of Lake Malawi and Lake Tangyanika; Shane Linder of Virginia presenting on catfish and collection biotopes; and Rusty Wessel of Kentucky presenting on Central American Cichlids. 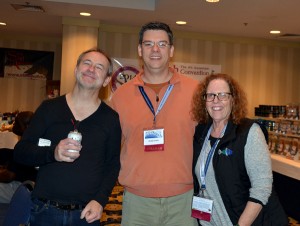 Anton Lamboj, Shane Linder, and Pam Chin were three of the four speakers 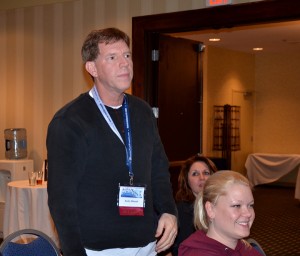 Rusty Wessel also presented on Central Americans. Here, he is contributing to discussion during Anton’s presentation.

The event also had a rare fish auction,with about 80 bags of unusual species donated to the event from our sponsors, which can be found at this link: http://capitalcichlids.org/aquamania/?page_id=45

Twenty percent of the proceeds from the auction went to support the Babes in the Cichlid Hobby, who donate 100% of their money to conservation and research. This year is also their 20th anniversary, so a cake was presented by new Babes, Rachel O’Leary and Whitney Sumerix, to two of the founding Babes, Pam Chin and Caroline Estes.  Additional money earned from auctioning fish donated by Rusty Wessel went specifically to the Guy D. Jordan Cichlid Research Fund. 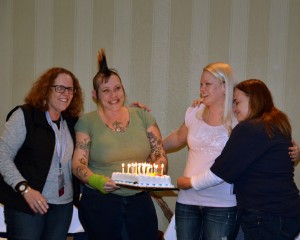 A birthday cake was presented to celebrate 20 years of fundraising efforts by the Babes in the Cichlid Hobby.

An Aquarium Beautiful Contest was also held, with several categories and over 20 entries.  The entire lobby of the hotel was filled with beautifully aquascaped tanks, really drawing in the public. The people’s choice prize went to Anthony Horos, for his C.A.R.E. S. scape. 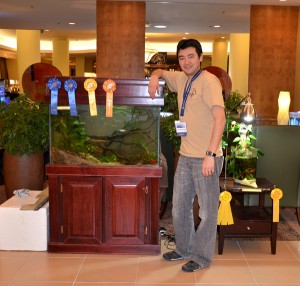 The convention also had a Give a Kid a Tank contest, and a Sunday Marketplace. Hundreds of people came through the marketplace, where there were tons of local and regional vendors selling fish and supplies. The event was a massive success! I stongly encourage people to attend regional and national events, you never know where you will find the species on your bucket list that you have been seeking! 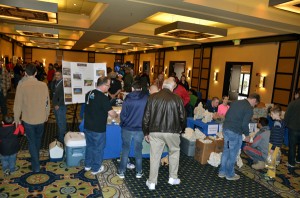 One end of the large room used for the Sunday Marketplace.