The Thai Micro Crab, or Spider Crab, is a diminutive crustacean with a carapace size roughly the diameter of a pencil eraser. Plant and shrimp safe, they have been gaining quick popularity in recent years. Despite their relatively frequent availability within the hobby, almost no breeding reports have been published. 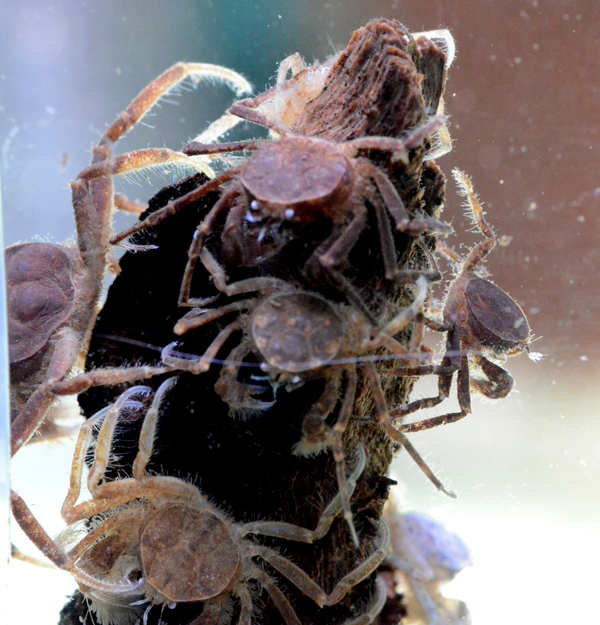 Limnopilos naiyanetri (Chuang & Ng, 1991) are a Hymenosomatid crab found in Southeast Asia. The species is characterised by its flat, pilose (hairy) carapace and chelipeds (legs). A popular and enchanting addition to a small invertebrate tank, they are completely peaceful and tolerant of a wide range of parameters and add an additional level of interest to a small tank.

While a shy and unassuming addition, once the crabs settle into a tank, they can usually be found clinging to decor or on the roots of plants, as shown in the video below.

While it has long been said that they complete their life cycle in freshwater, there have not been documented breeding reports with photographs to support suggested success. There is much anecdotal evidence available on the internet, and many reports of the female holding eggs, which change from orange to tan to grey, under her pleon until they hatch into larvae and are released. Some anecdotal breeding information suggests that the larvae may need an orienting light. Many people, myself included, have been working with various strategies to rear them with little success.

In the past, I have seen females release larvae many times, and have seen rare instances of baby crabs in the tank, but have not had any success with any consistent rearing of young. I have had a female holding eggs for several weeks. Without my notice, they hatched into larvae and she continued to hold them. It appears that they have transitioned into young crabs, a very exciting discovery! This suggests that the larval release may be premature, and would explain a lot of my previous failures. 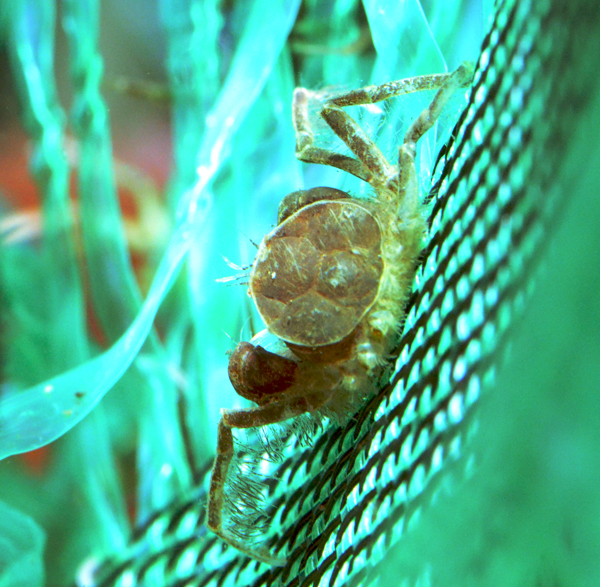 I have them set up in a tank with leaf litter, driftwood, and some low light plants including red root floater, anubias and some bolbitis fern. They spend most of their time in the dense roots of the plants, or the crevices of the wood. They appear to use their pilose (hairs) to detect food, largely eating particulate foods (I use Golden Pearls, and Nano Bites, as well as occasional frozen cyclops).

The tank temperature is around 74F, with a pH of 7.4, gh 7, kh 8, tds around 180. Water changes are done twice a week, consisting of a 25% exchange. Hopefully the baby crabs will be released soon and I will have further success in order to have a better idea of what exactly was the difference with this setup over previous attempts.