AMAZONAS Videos: Bettas in the Wild – What They Tell Us About Minimum Tank Sizes for Bettas 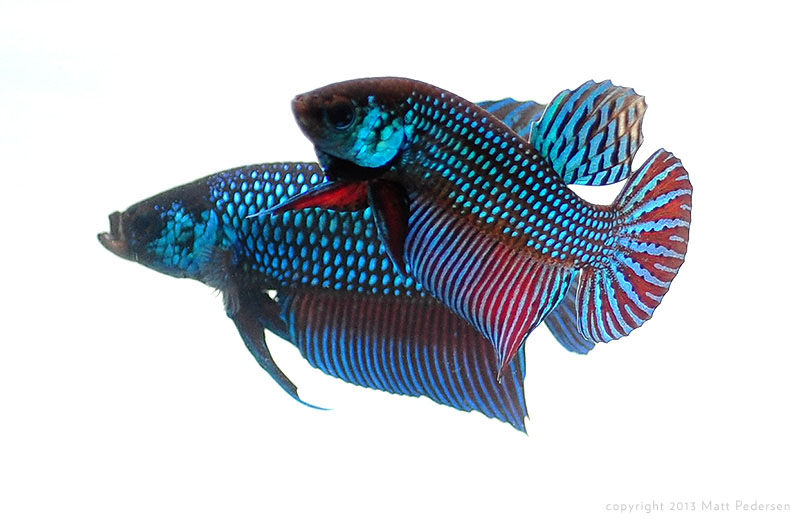 Sparring wild male Betta mahachaiensis. What can we learn from how these fish live in the wild?

We recently received a comment (at the end of this unrelated article) in response to my review of the Deep Blue Professional Betta Aquariums; the crux of the concern being “these tanks seem small.”

There is no shortage of debate over how “small” a tank is acceptable for Bettas, and the comment was a welcomed inspiration to jump off and examine the issue for myself. A very interesting body of evidence, in the form of videos of betta collection in the wild, really forces us to think critically about their space requirements.

One of the talking points that continues to crop up is whether Bettas, in their natural habitat, truly “live in puddles” or not. Generally speaking, those that believe that they “live in puddles” (or my personal favorite, the hoof print of a Water Buffalo), cite this as a free pass to keep bettas in cups of water. Others counter the “puddle” argument by saying “rice puddles” (aka. rice paddies) are not small, but huge ponds of water, perhaps several feet deep. Before I get to the wild betta videos, let’s think this through.

First we have to understand the Betta that most folks are talking about. The are certainly not wild fish like the ones pictured above; they are ornamental, domestic forms, usually labeled as Betta splendens, but potentially a hybrid mix of more than one species, derived from potentially hundreds of generations of captive-breeding (generation times on Bettas can be as little as 3 months). 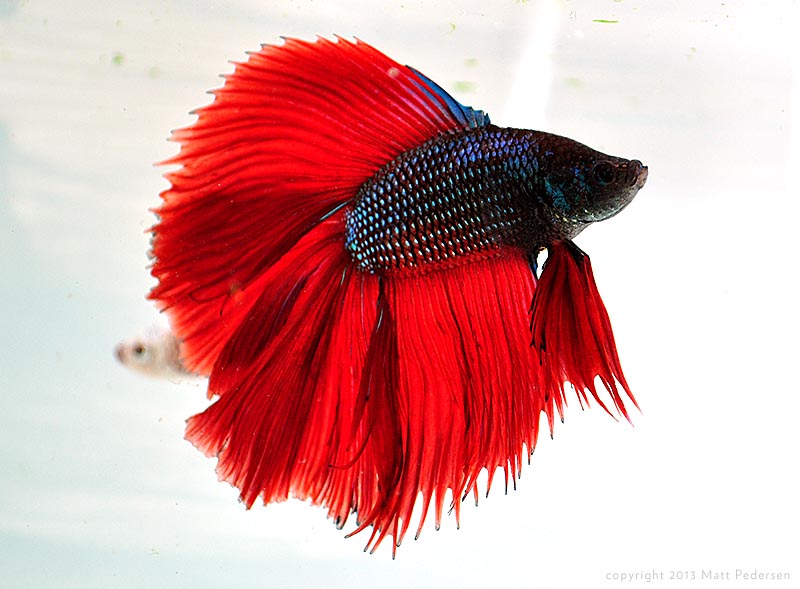 Domestic ornamental bettas like this double tail are about as far away from “wild” as it gets!

The volume of water afforded to individual domestic bettas in the countries where they are raised has been cited down to as little as 4-8 oz. of water. Males in particular are segregated at a very young age to prevent fighting and allow for good fin growth. Generally speaking, males are only given larger quarters when breeding.

Bettas in commercial settings are often segregated into endless fields of glass jars, workers walking on the containers themselves. Live foods are used which help prevent fouling the water. 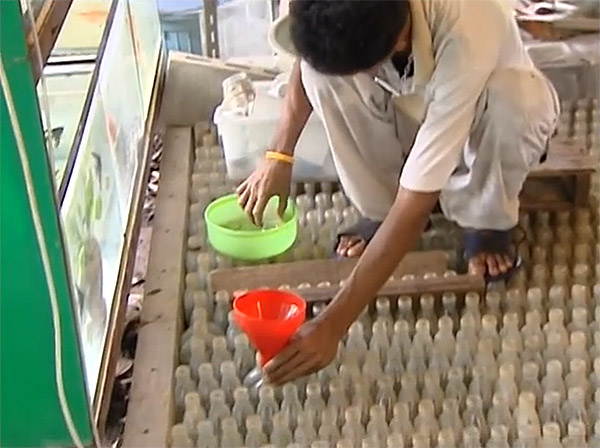 Screen capture from the video below: Betta feeding time at Aquastar 71’s hatchery operation – aquarist literally stands on the bottles housing fish, feeding each bottle with live feed, one at a time.

Water is presumably changed very frequently, at times with very ingenious and simple setups that allow jars to be filled and simply overflow, refreshing the contents inside.

A look at the Aquastar 71 hatchery in Thailand provides insights into exactly how this process works; start the video below at 1:40 if you want to see the bottles in action.

Another great look at betta farming is presented in a German-language documentary by AquaNet.tv. This video isn’t available in full on Youtube, so we’ll ask you follow the link to see it. Start around 2:40 mark to see the endless fields of glass bottles and how they’re put into practice.

By comparison to the endless fields of bottles seen above in Thailand, the aquariums I reviewed afford the fish far more space. Regardless, these unfiltered aquariums do require routine large water changes to control waste, and thus aren’t for everyone, particularly the lazy fish keeper.

We can certainly debate the question “what is the minimum aquarium size needed for a Betta?” In truth, there really isn’t a black and white answer. Obviously there is a true “minimum”. . . eg. the fish must be able to move and turn around and such…but to try set a strict baseline minimum like “2.5 gallons” is arbitrary and akin to the mythology of “1 inch of fish per gallon” when trying to come up with stocking guidelines for an aquarium.

We must avoid anthropomorphism when examining this question, as none of us can truly ascertain a fish’s “emotional state.” I don’t think any of us is truly in a position to determine whether a fish’s existence is “bleak” or otherwise, particularly from the viewpoint of the fish. That determination is the projection of our own consciousness onto a fish. You are welcome to empathize with a fish of course, but realize that they fish may well completely lack the perceptions and emotions you’re attributing to it. I can concede it is possible that a fish can perceive its life in a glass box is a “bleak” existence, but my personal viewpoint, tempered through decades of aquarium keeping, suggests this is not likely.

Instead, science probably gives us the better mindset to address this question. We can observe a fishes’ health, behavior and longevity, and weigh that against the husbandry provided by the caretaker. This is why a Betta farmer in Thailand might well say that 4 oz of water per fish is PLENTY, whereas a beginning aquarist in the western world who’s averse to doing frequent water changes and views a fish as decoration would need a 5-gallon aquarium with filtration to provide a buffer against inexperience and less intensive husbandry techniques.

But all these views now stated, I must circle back to the start and apply the insights we gain from observing the fish in the wild.

First, an example – the marine clownfish. Some might argue that clownfish on a reef have “the whole ocean” at their disposal, and thus putting them in a 6-gallon Nanocube is torture…. 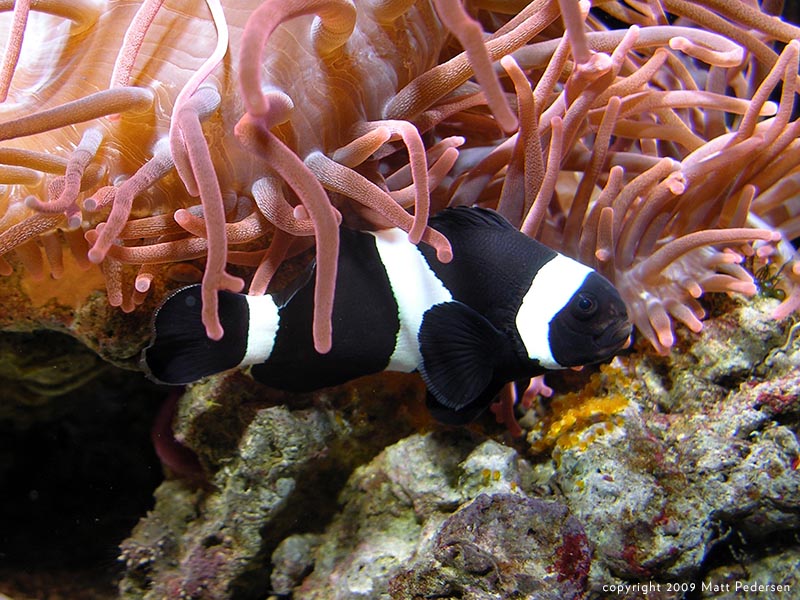 When you consider that wild clownfish, particularly the smaller species, may almost never leave the anemone they call home, you realize that they don’t use “the whole ocean” nor do they need it. They may need only one square foot or less space to be plenty happy in captivity…never-mind those that were born in captivity from day one. Simply put, their biology and natural behavior determine their true need for space. Which is why I had no problems keeping and breeding my Black Ocellaris clownfish in a 6-gallon nanocube for years (their Red Bubble Tip Anemone host ultimately growing to fill virtually the entire tank).

And like the clownfish, we must examine the nature of a Betta, particularly the male. We realize they are territorial but also site restricted, by choice. While they may live in vast fields of rice that may well include acres of water and be quite deep in some spots, the bettas themselves might never move more than a few inches away from their bubblenest. Ultimately, while there may be vast spaces of water available to the fish, the bettas aren’t actually utilizing these expanses of water.

A really good example that brings this point home is seeing how the species Betta mahachaiensis lives in the wild. Males literally spend much of their lives in the bracts of palms…tiny pockets of space and water. Check out this video of hand collecting Mahachai Bettas; pay close attention to the actual spaces where the collectors are seeking and finding these fish.

Next up, collecting Betta smaragdina; this video doesn’t show the actual act of scooping up the fish, but what it clearly illustrates is the process of locating the wild betta by looking for their bubblenests. Take note of the amount of water and space around that nest, and realize that there is a male fish right underneath it..which is easily scooped up (plenty of “eye candy” showing wild Smaragdinas after they’re caught).

Consider the weed choked pond in Thailand where we watch the collection of wild Betta splendens (generally the species assigned to our domestic form).

I’m not sure the species shown in this next video; it looks like B. smaragdina again. While the video is terribly out of focus when in close, it’s amazing to see how “small” everything really is. The first bubblenest you see in the video actually looks like it has a lot of space around it…until you see the size of the collector’s hand as it engulfs everything you see in the frame.

Sure, bettas can be found on larger water bodies too. Check out the collection of Betta imbellis (and note where exactly the fish are sitting when they’re collected):

So What Do Wild Bettas Tell Us?

Clearly, the wild betta, in its natural state, does not have a large demand for space. It truly is site restricted by choice or instinct, and lives in heavily structured and therefore somewhat confining spaces. Consider that these bettas spend most of their lives hiding in a thicket of vegetation, probably often nestled in direct contact with the leaves and detritus around them (while that might make you claustrophobic, this is what Bettas do). They are not active swimmers, darting back and forth, either. Given these observations, I think the wild observations clearly support the “puddle” notion of their existence.

So ultimately, when we ask: What’s the minimum tank size for a betta?, there isn’t a firm answer (isn’t that the norm in the aquarium hobby?). Even among experienced breeders, there is no absolute agreement, and for each betta keeper there is only a private, personal accountability to what we feel is ethical and makes common sense. I do believe it’s fair to say that these fish may well only need a “puddle” of water, as evidenced by the videos of these fish in their native, wild habitat.

However, even though the wild forms of the species live in potentially tiny spaces, and the practice of breeding bettas has produced animals that flourish in truly small bodies of water, there is a maintenance requirement that comes with such a small volume of water in captivity. Still, to say that housing bettas in small spaces is unnatural would seem to be misleading as demonstrated by their wild behavior and habitats. To say that housing bettas in small unfiltered aquaria is cruel is a wholesale generalization—for bettas, it appears clear that small aquariums are only “cruel” when proper husbandry isn’t provided.

So if you’re unable to provide the routine husbandry required or if you’re inexperienced, it is obvious that a tiny, unfiltered tank isn’t appropriate for you. And certainly if you feel that a typical “Betta splendens” requires a larger tank, by all means please do furnish one. This is not to say that I encourage our readers to give their bettas the “smallest tank possible,” but to simply acknowledge that small spaces do work, in the right hands, with proper care, and the fish most certainly will be healthy and, with a little bit of snark, I dare say they may even be “happy”.