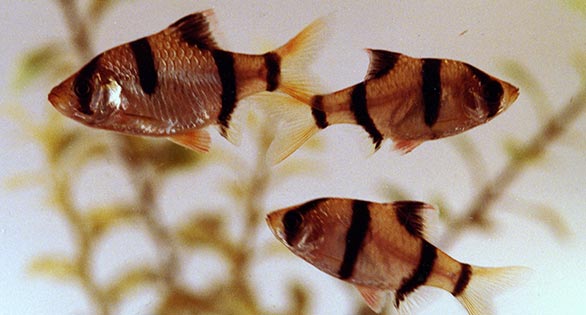 How a Banded Barb gets its stripes
by Jack S. Frankel, Ph.D.

I was quite interested to read Dr. Paul Loiselle’s article “Tetra-, Penta, Hexa-: A Review of the Banded Barb” in the September/October 2014 issue of AMAZONAS. The banded species of the Puntius complex have certainly attracted their share of attention in the aquarium hobby, not only for their colorful and varied banding patterns, but for the confusion surrounding their classification as well.

Dr. Loiselle’s examination of the banded barbs clearly provides a useful guide to all hobbyists, and particularly to those not familiar with these cyprinids. My laboratory at Howard University became involved with several species of Puntius as a result of studies designed to ascertain maternal and paternal contributions toward the development of hybrid barbs (Frankel and Wilson, 1984; Frankel, 1985a).

In the course of these investigations, we maintained and bred literally hundreds of Tiger Barbs (Puntius tetrazona). As anyone who has had the opportunity to observe large numbers of this species can attest, Tiger Barbs exhibit variation in the length of the second vertical band. This ranges from individuals exhibiting a full band to those in which the band extends from the dorsal margin of the body to only halfway down the side.

To the casual observer, it would appear that an infinite variety of band lengths occur. However, such is not the case and, by scoring hundreds of Tiger Barbs, we determined that fish could be categorized as having a complete band (band extends from dorsal to ventral margins), a half-band (band never extends more than 50 percent down the side), or an incomplete band (band extends more than 50 percent but not fully down the side).

We proceeded with a series of controlled matings; the phenotypic data of all progeny were recorded and subjected to statistical analysis to determine the mode of inheritance of this banding pattern (Frankel, 1985b). We conducted 30 separate crosses, beginning with those involving presumptive homozygous parentals, through F1 x F1 and backcross matings. All of our matings resulted in a satisfactory fit to expected proportions. So, what is the genetic basis for the variation in the length of the second vertical band?