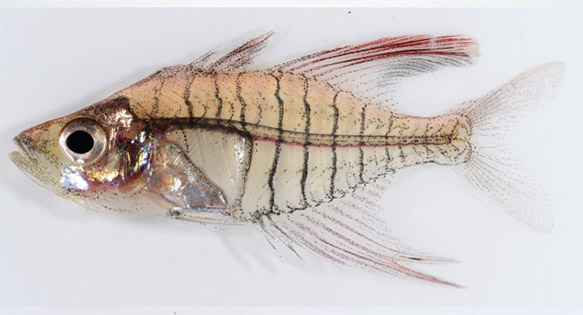 We take a first note to mention the etymology of this species name, which was chosen “in memory of Alex Ploeg, a good friend, fellow taxonomist, advisor and fellow conservationist against alien aquatic species; for his services  to the ornamental fish trade in this region and abroad in  his role as the Secretary General of the Ornamental Fish International; who unfortunately perished in a terrible tragedy over Ukraine on 17 July 2014.” Truly a fitting tribute in remembrance of a man, and family, whom many are still mourning.

We are struck by the beauty of this species, which happens to offer surprising sexual dichromatism and dimorphism.

Per the paper’s abstract:

Members of the genus Gymnochanda have been reported as delicate aquarium fish and members of the genus are not often seen offered for sale. Interestingly, it is reported that the specimens used for this description were trapped for the aquarium trade and were part of a first collection of the species for export.  The paper describes this fish as coming from still water pools near swamps and rivers, specifically trapped in “brown water”, which suggests that this species’ care requirements would be in line with other species that require softer, acidic water.

The female of Gymnochanda ploegi lacks the color and extended fins of the male.

We encourage you to read the full species description of Gymochanda ploegi, and should you be lucky enough to keep this new species in an aquarium successfully, we’d love to hear how you did!

Special Thanks to the Freaky Fish Club for bringing this to our attention.

UPDATED: 9/25/2014 – we incorrectly labeled an image of Gymnochanda verae from this publication as a paratype of G. ploegi.  We have removed this image to eliminate any confusion and to highlight only the newly-described G. ploegi.