In my previous post, I presented a fairly detailed overview of Cambodia’s Tonlé Sap Lake, a freshwater ecosystem which undergoes massive seasonal flooding—and a habitat which, I argued, would make for a fascinating biotope aquarium. In this installment I’ll be looking at how to do just that, along with some personal observations from my attempt to create a small replica of the great lake’s flooded forest. 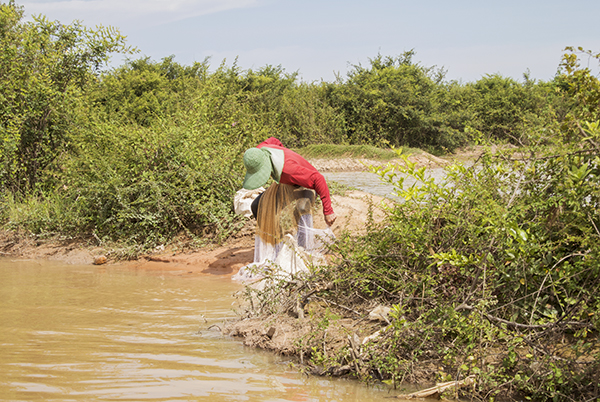 The shallow waters around the Tonlé Sap are home to a wealth of fish species. The fisherman pictured above is using a cast net for gourami and walking catfish, both of which are abundant close to shore

With the vast scale of the lake and surrounding floodplain there are dozens of different microhabitats, any of which would make for a fascinating aquarium. For the purposes of this post, I’ll highlight the two main zones of the lake and some of the aquarium species found in each. Finding a definitive list of fish species found in the lake, is, unfortunately, quite difficult, as even scientists disagree substantially on the number and species of fish which occur there. As the lake is also connected to the Mekong drainage (via the Tonlé Sap river), there are also a number of migratory species which may appear in the Tonlé Sap on a seasonal basis. Some of the more thorough published surveys of the lake’s fauna are now over a decade old and use a number of outdated scientific names—further clouding the issue.

The list of species below is based on both my own observations and peer-reviewed research, but is far from comprehensive. Considering the imperiled state of this biodiverse and incredibly important body of water, much research still needs to done in order to develop a better understanding of the lake and its inhabitants. 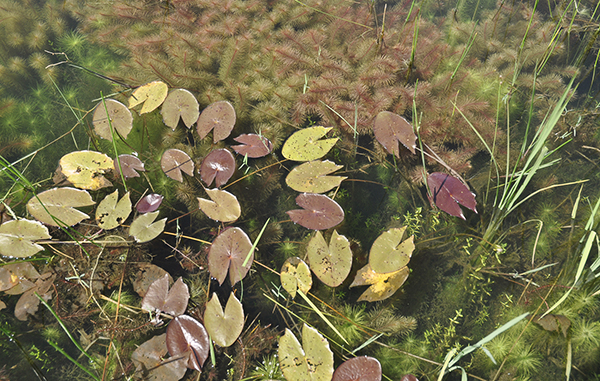 Swampy, vegetation-rich shallows on the outer banks of the lake are home to many popular aquarium fish

Shallow floodplain:
All around the outer edges of the lake, the water is shallow, warm, and often choked with aquatic plants, emergents, or temporarily submerged terrestrial plants. In the flood season, the lake expands to cover dozens of square kilometers of mixed-use land, including rice fields and forests. This is critical habitat for many juvenile fish, but  other smaller species can also be found darting around in the shallows and taking advantage of the abundant cover. An aquarium replicating the outer edges of the lake could take many forms—from the smallest of nano tanks to a large display of 100 gallons or more. The size of the tank will largely determine which species are included, but here’s a brief list of  aquarium fishes which can be found in this area: 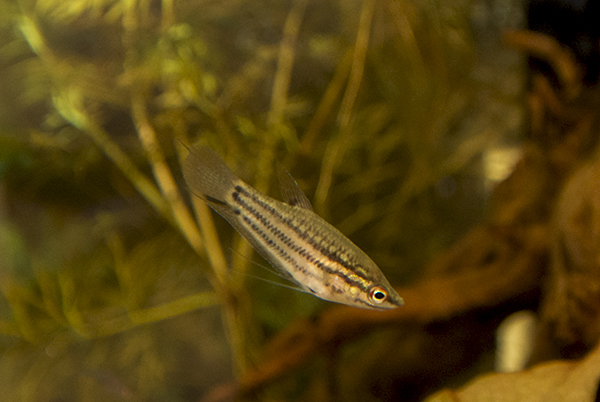 A juvenile croaking gourami (T. pumila) is very much at home in a tank replicating the shallows of the lake 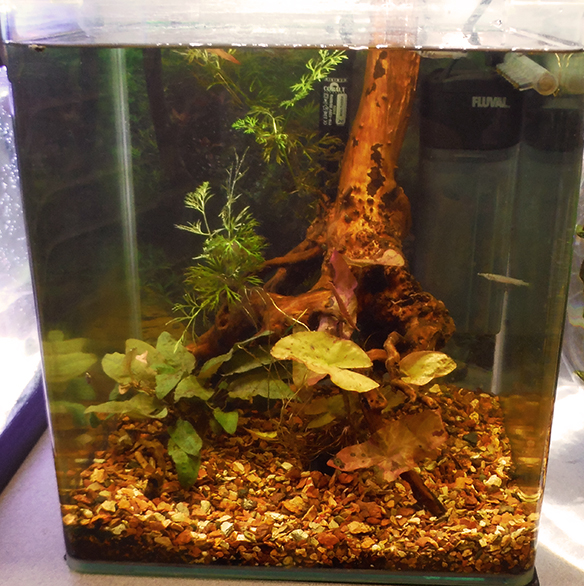 My (very) simple 8-gallon Tonlé Sap aquarium, just after adding fish. A few halfbeaks can be seen exploring the tank

Not having the time nor tankspace to dedicate to a large undertaking at the moment, I chose to put together a small-scale representation of the shallows of the lake. Using an approximately 8-gallon Fluval aquarium, I was able to create an interesting mini-biotope quickly and inexpensively. For substrate, I wanted something that would best replicate the distinctive reddish clay of the region, but had a hard time finding anything locally which could do so. I settled for Seachem’s Flourite, which matches the color, if not the consistency, of the lake’s substrate. For decor, I used a single piece of red spider wood which had been pre-soaked and weighted. I planted a nice looking Cryptocryne wendtii, which is at least regionally appropriate (I observed Crypts on the edge of the lake but could not identify them to species level). To replicate the profusion of surface vegetation, I added some floating rosettes of water sprite (Ceratopteris thalictroides) and planted a dwarf lily (Nymphaea sp.), which will over time send very pretty reddish leaves up to the water’s surface.

For fish, I started with a pair of Sparkling Gourami (Trichopsis pumilia) barely 1/2″ in length and a small group of juvenile Wrestling Halfbeaks (Dermogenys pusilla) which generally stay close to the surface. A little school of Espei Rasboras (Trigonostigma espei) will round out the tank once I can procure some. While it is not a 100% accurate replica of the shore of the lake, I enjoyed putting together a small assemblage of representative species from this habitat and I think it is something most aquarists could readily accomplish without much difficulty. The major challenge is sourcing the right species, but many Tonlé Sap natives are readily available in the aquarium trade. 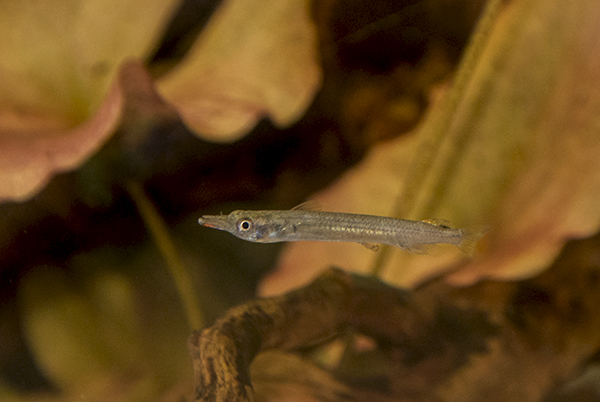 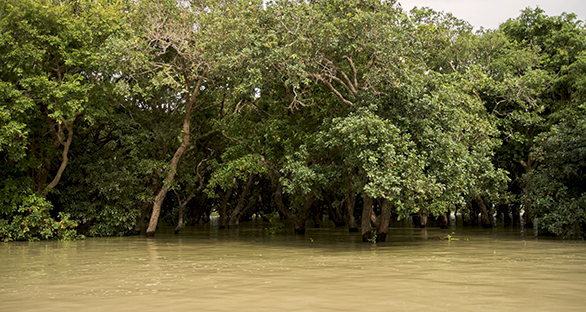 The flooded forest surrounding the center of the lake is dominated by large, predatory species

Flooded Forest/Open water:
The other major habitat type found in the Tonlé Sap occurs within the main body and center of the lake. Around the low-water borders of the lake (i.e. before the floods expand its borders into the surrounding countryside), there is a ring of dense, partially-submerged forest which surrounds the open waters of the main lake. This area is a major spawning ground for some of the freshwater giants which occur in the Tonlé Sap, and it is also home to a number of fish suitable for an appropriately large aquarium. To replicate this zone, an aquarium should have plenty of open swimming space, a sand (as opposed to clay) substrate, and a few large pieces of driftwood (trunks or stumps would best fit the bill here). This area is largely shaded by canopy, so dim or partial lighting could be used to great dramatic effect here. Water movement in this part of the lake is negligible, and there is very little in the way of aquatic plant life or floating vegetation. This area is largely the domain of big, predatory species and medium-sized schooling fish—fans of so-called “monster fish” will recognize many of the large and fearsome residents of the inner lake. Please keep in mind that some of these fish far exceed the capacity of the average aquarium and require a large or in some cases enormous aquarium to house adequately. Species at home in this zone include:

The Tonlé Sap lake is a truly unique freshwater ecosystem—both enormously biodiverse and culturally important to the region. It certainly proved to be one of the more fascinating habitats I had the good fortune to visit in my Southeast Asian travels, and I have enjoyed the chance to replicate a tiny slice of that place in an aquarium. I would urge fellow hobbyists to continue to explore the unique aquatic habitats of the world in this way—researching conditions, using habitat photos for inspiration, and creating a microcosm of a tropical ecosystem half a world away. A well-done biotope aquarium can, if only for a moment, bring such far flung locales as Cambodia’s Tonlé  Sap into anyone’s home.