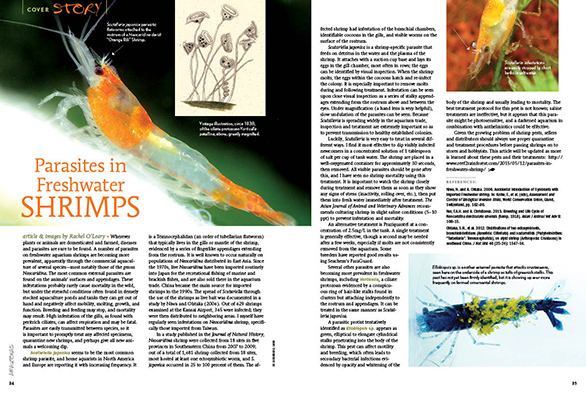 Article by Rachel O’Leary from the July/August AMAZONAS.

Wherever plants or animals are domesticated and farmed, diseases and parasites are sure to be found. A number of parasites on freshwater aquarium shrimps are becoming more prevalent, apparently through the commercial aquaculture of several species—most notably those of the genus Neocaridina. The most common external parasites are found on the animals’ surfaces and appendages. These infestations probably rarely cause mortality in the wild, but under the stressful conditions often found in densely stocked aquaculture ponds and tanks they can get out of hand and negatively affect mobility, molting, growth, and function. Breeding and feeding may stop, and mortality may result. High infestation of the gills, as found with peritrich ciliates, can affect respiration and may be fatal. Parasites are easily transmitted between species, so it is important to promptly treat any affected specimens, quarantine new shrimps, and perhaps give all new animals a welcoming dip. 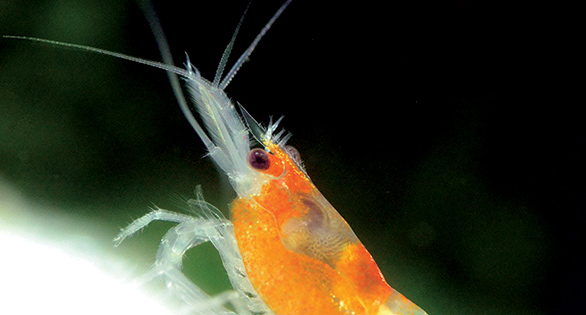 Scutariella infestation of parasitic trematodes attached to the shrimp’s rostrum between its eyes.

Scutariella japonica seems to be the most common shrimp parasite, and home aquarists in North America and Europe are reporting it with increasing frequency. It is a Temnocephalidan (an order of tubellarian flatworm) that typically lives in the gills or mantle of the shrimp, evidenced by a series of fingerlike appendages extending from the rostrum. It is well known to occur naturally on populations of Neocaridina distributed in East Asia, covering China, Korea, Taiwan, and Japan. Since the 1970s, live Neocaridina have been imported routinely into Japan for the recreational fishing of marine and brackish fishes, and are also sold there in the aquarium trade. China became the main source for imported shrimps in the 1990s. The spread of Scutariella through the use of the shrimps as live bait was documented in a study by Niwa and Ohtaka (2006). Out of 629 shrimps examined at the Kansai Airport, 365 were infected; they were then distributed to neighboring areas. I myself have regularly seen infestations on Neocaridina shrimp, specifically those imported from Taiwan. 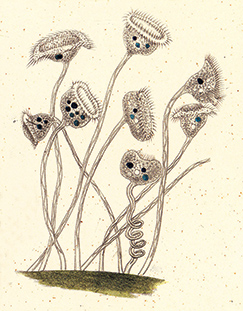 In a study published in the Journal of Natural History, Neocaridina shrimp were collected from 18 sites in five provinces in Southeastern China from 2007 to 2009; out of a total of 1,681 shrimp collected from 18 sites, most hosted at least one ectosymbiotic worm, and S. japonica occurred in 25.2 to 100 percent of them. The affected shrimp had infestation of the branchial chambers, identifiable cocoons in the gills, and visible worms on the surface of the rostrum.

Salt Cure
Scutariella japonica
is a shrimp-specific parasite that feeds on detritus in the water and the plasma of the shrimp. It attaches with a suction cup base and lays its eggs in the gill chamber, most often in rows; the eggs can be identified by visual inspection. When the shrimp molts, the eggs within the cocoons hatch and re-infect the colony. It is especially important to remove molts during and following treatment. Infestation can be seen upon close visual inspection as a series of stalky appendages extending from the rostrum above and between the eyes. Under magnification (a hand lens is very helpful), slow undulation of the parasites can be seen.

Because Scutalleria is spreading widely in the aquarium trade and in hobbyists’ tanks, visual inspection and treatment are extremely important so as to prevent transmission to healthy established colonies.

Luckily, Scutalleria is very easy to treat in several different ways. I find it most effective to dip visibly infected newcomers in a concentrated solution of 1 tablespoon of salt per cup of tank water. The shrimp are placed in a well-oxygenated container for approximately 30 seconds, then removed. All visible parasites should be gone after this, and I have seen no shrimp mortality using this treatment. It is important to watch the shrimp closely during treatment and remove them as soon as they show any signs of stress (inactivity, rolling over, etc.), then put them into fresh water immediately after treatment. The Asian Journal of Animal and Veterinary Advances recommends culturing shrimp in slight saline conditions (5–10 ppt) to prevent infestation and mortality.

An alternative treatment is to use Praziquantel at a concentration of 2.5mg/L in the tank. A single treatment is generally effective, though a second one may be needed after a few weeks, especially if molts are not consistently removed from the aquarium. Some breeders have reported good results using Seachem’s ParaGuard. 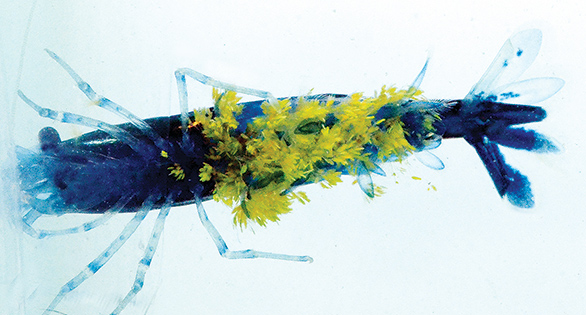 Ellobiopsis sp. greenish external protists attached to the pleopods on the shrimp’s underbelly.

Several other parasites are also becoming more prevalent in freshwater shrimps, including Vorticella, a ciliate protozoan evidenced by a conspicuous ring of hair-like stalks found in clusters but attaching independently to the rostrum and appendages. It can be treated in the same manner as Scutalleria japonica.

The parasitic protist tentatively identified as Ellobiopsis sp. appears as green, elliptical to elongate cylindrical stalks penetrating into the body of the shrimp. This pest can affect motility and breeding, which often leads to secondary bacterial infections evidenced by opacity and whitening of the body of the shrimp and usually leading to mortality. The best treatment protocol for this pest is not known; saline treatments are ineffective, but it appears that this protist might be photosensitive, and a darkened aquarium in combination with anthelmintics could be effective.

Given the growing problem of shrimp pests, sellers and distributors should always use proper quarantine and treatment procedures before passing shrimps on to stores and home aquariums.

COMMENTS INVITED! Do you have experiences with these or any other parasites of freshwater shrimps? Please add to our file of information.