In my first post on India’s Sunderbans National Park, I gave a brief overview of this unique ecosystem—the world’s largest mangrove forest—and shared some photos of the wildlife that call this huge expanse of land (stretching from West Bengal and into Bangladesh) home. In this piece, I’ll be looking specifically at the aquatic and semi-aquatic life which can be found in and around the Sunderbans’ silty, brackish waters. 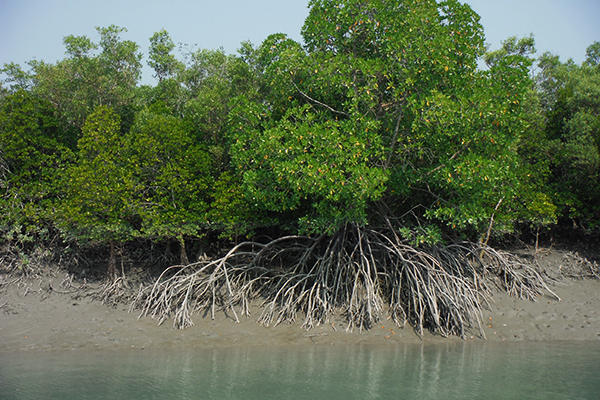 Brackish water, mud, and mangrove trees are the dominant features of the Sunderbans

I spent three days traveling through this immense expanse of mudflats and mangrove forest by boat, and was awestruck by the diversity and beauty of habitat that aquarists tend to overlook. The mud banks were literally teeming with life—colonies of mudskippers (Periophthalmus sp.) could almost always be seen, along with an overwhelming variety of colorful fiddler crabs warily standing guard beside their burrows. Although most of the river channels were too silty to see much, along the shore it was possible to spot archerfish, monos, and the occasional needlefish close to the surface. The local fisherman’s catches showed off some of the impressive diversity of fish life in the main river, with large silurid catfish, juvenile snapper and grunts, and even sharks making up a large portion of the food fish caught in the region. Numerous species of glassfish (Chanda sp.) also inhabit the Sunderbans waterways, along with other ubiquitous brackish species like Scats (Scatophagus) and moray eels (Echidna sp.). The fascinating antenna fish (Sillaginopsis panijus), which sometimes makes its way into the aquarium trade, is also found in this area.

In terms of larger fish fauna, I was surprised to learn that the Sunderbans is home to at least 2 species of cat shark and 1 of true shark, all of which are often found far from open ocean in brackish waters. Perhaps the most interesting of these is the Ganges shark (Glyphis gangeticus), which inhabits pure fresh and slightly brackish water environments along the Ganges river system. This incredibly cryptic species (only a few specimens have been positively identified) grows to around 2 meters and appears to be well adapted to the turbid, low-visibility waters of the Ganges. Unsurprisingly, I did not come across any of these Elasmobranchs in my relatively short time in the Sunderbans, but learning of their existence and seeing their habitat gave me a new appreciation for the odd estuarine world they inhabit. 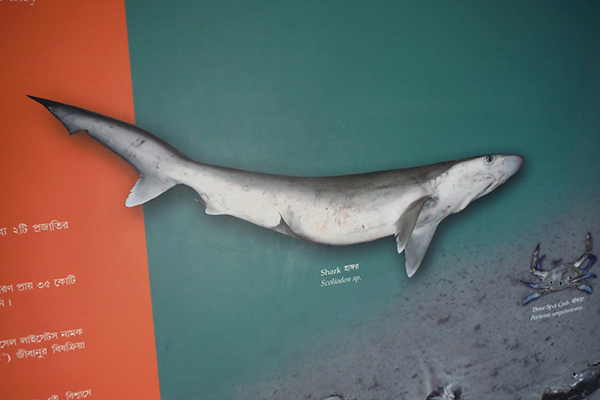 Although the Ganges shark certainly has no place in the aquarium, the two species of cat sharks also found in the Sunderbans could potentially make for unique residents of a sufficiently large and species-dedicated setup. To my knowledge, none of these species have ever been imported for the aquarium trade–and they may very well be protected by Indian law–but they’re certainly worth a mention. I can envision an amazing public aquarium display featuring brackish-water sharks and other mangrove dwellers.

Among the most colorful residents of the Sunberbans were the ever-present fiddler crabs, which could be seen in almost every shade imaginable. These were quite stunning inverts, and I imagine if their requirements were met they would make for great riparium/terrarium subjects. These fiddler crabs were seen fairly far inland, which indicates they may be tolerant of only slightly brackish (or perhaps even pure fresh) water. They are primarily scavengers, feeding on fallen fruit, dead fish, and carrion, and would likely make relatively undemanding captives. 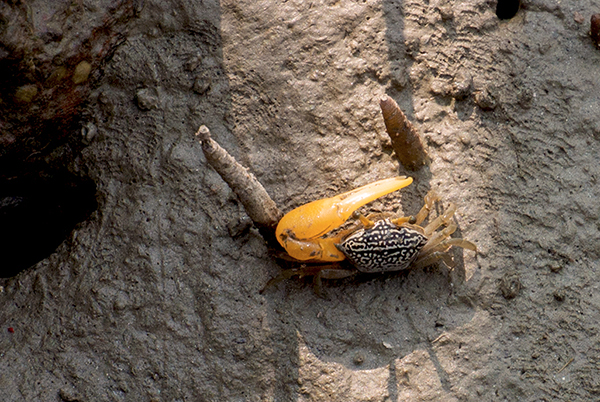 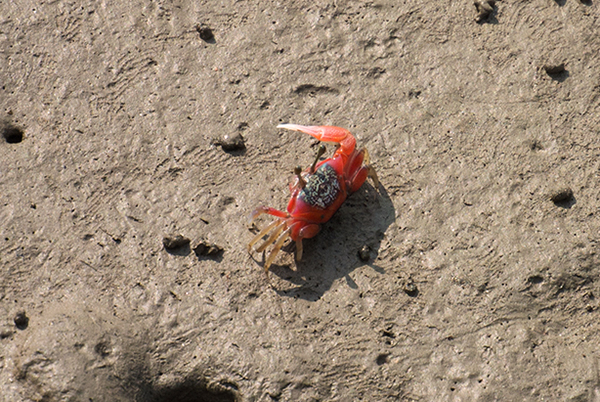 Another individual Fiddler Crab featuring similar markings but skewed heavily towards the red end of the color spectrum. 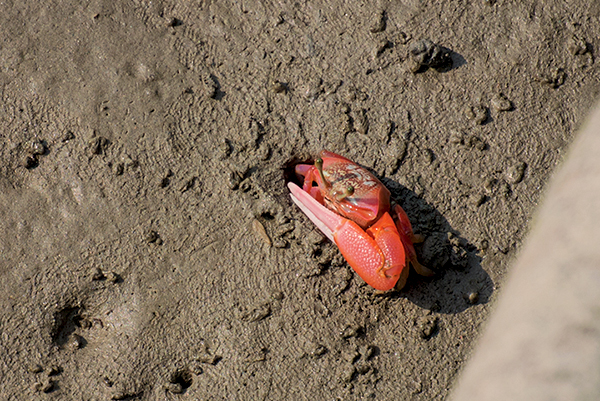 A mostly pink and red Fiddler Crab is about to disappear into a hole in the mud.

Due to its proximity to Calcutta, the major fish export hub of India, several species of aquarium fish are collected from the Sunderbans on occasion. Collection occurs on the outskirts of the protected area, where commercial and artisanal fishing efforts are allowed, and primarily in brackish to almost pure freshwater conditions. The silver datnioid (D. polota) is sometimes collected here, as are a few more commonly seen fish like scats, archers, and monos. One other noteworthy fish collected from this region is the “freshwater” zebra blenny (Omobranchus zebra). I recently acquired a small group of this fascinating estuarine fish which were collected from the Sunderbans, and they make for very interesting aquarium residents. This brackish member of the popular marine aquarium fish family Blenniidae is every bit as full of personality as their saltwater cousins, and mine have adapted readily to aquarium life. 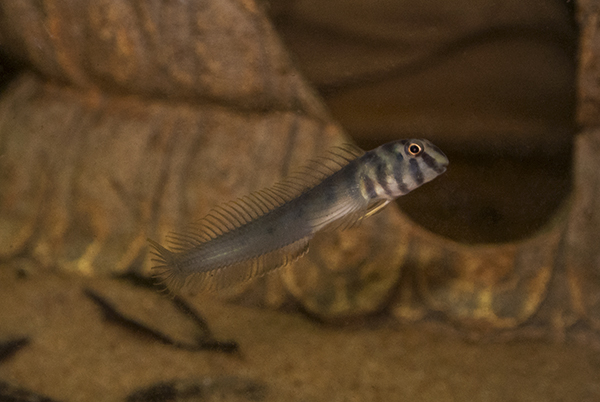 The Zebra Blenny (O. zebra) in the author’s aquarium. These fish are occasionally collected from the Sunderbans

My travels in the Sunderbans left me with an entirely new appreciation for the land and ecosystems that exist where rivers meet the sea. To travel for days through the vast delta of the mighty Ganges river, accompanied by storks, crocodiles, cobras, and monitor lizards was truly an incredible experience. As always, though, it was the life below water which really drew my attention. With a community of fish and invertebrates so diverse that they literally burst forth from the water’s edge to invade the land, the Sunderbans has something to offer any aquarist looking to create something beyond the usual in their home aquaria. 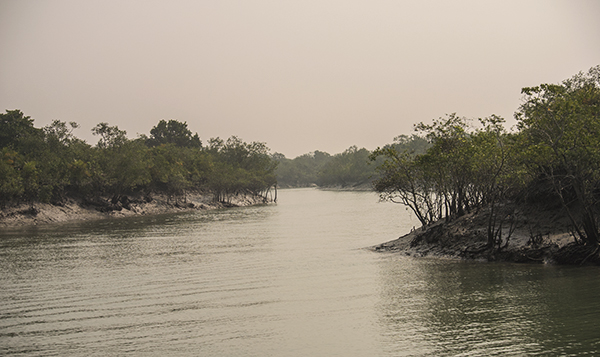 These winding, muddy creeks and pristine forests are home to thousands of species