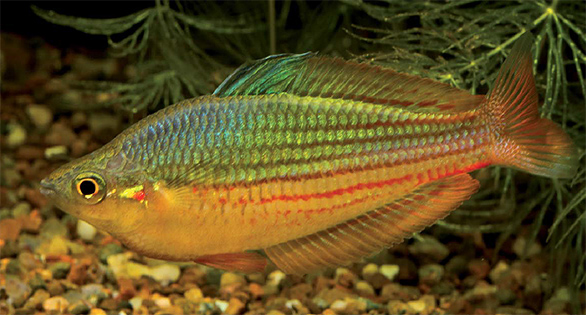 We know more than a few aquarists and ichthyophiles who’ve dreamed of this happening to them. This week, world-renowned rainbowfish expert and breeder Gary Lange was honored with the species description of Melanotaenia garylangei. The description was published in the May, 2015 issue of Fishes of Sahul, Volume 29, Number 2, by Johannes A. Graf, Fabian Herder & Renny K. Hadiaty. Fishes of Sahul is the quarterly publication of the Australia New Guinea Fishes Association – ANGFA. 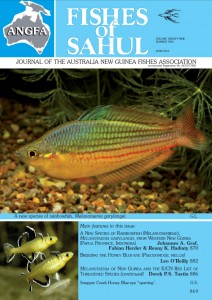 The description of Melanotaenia garylangei was published in the May, 2015 issue of Fishes of Sahul, Volume 29, Number 2

This species was discovered in 2010 by Johannes Graf, Dan Dority and Lange, in the vicinity of Dekai, located in the Brazza River Basin of West Papua. The new species of rainbowfish has been known to the aquarium hobby only briefly, initially carrying the trade names Melanotaenia sp. “Dekai” or M. sp. “Dekai Village”; it has also been known as the Golden Rainbowfish.

Since its discovery, it has become available through Lange (who lives in St. Louis, Missouri), and now others working with captive-bred stock. It matures at a very small size, as small as 1 inch, and is said to remain small, possibly not exceeding 2 inches (5 cm) in length (others have stated 6-8 cm as the max. length for this species). Males develop a black lateral stripe during courtship; females are relatively somber in coloration compared to males.

We’ll leave you with a couple of videos of this species doing what it does best: looking fantastic and now doubling as an honor to one of the most influential contemporary American aquarists. 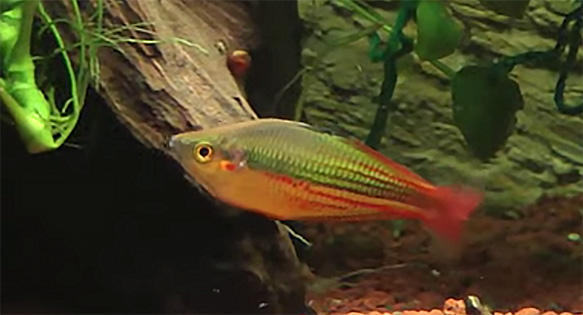 Congratulations to Gary Lange on this most fitting recognition.