During my travels in Sri Lanka last autumn, I was fortunate enough to spend two days in the incomparably beautiful Sinharaja Forest Reserve in the Southwestern corner of the island. This protected tract of rainforest is so rich in biodiversity that it has been designated a UNESCO World Heritage site and in my opinion, it is one of the great and truly wild places on this planet. Although most of the wildlife I encountered in Sinharaja was terrestrial in nature, the park abounded with clear, cool mountain streams teeming with a number of endemic fish. 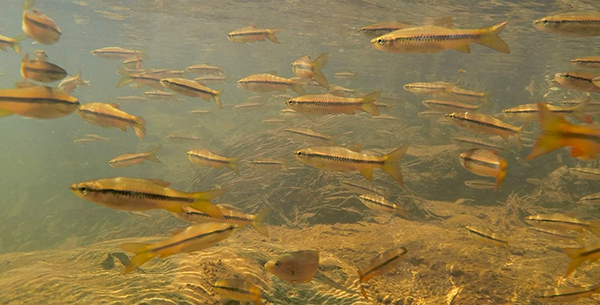 Although I make no claims to be a videographer, I managed to capture some footage of some spectacular freshwater biotopes throughout the park. Most of these were characterized by fast-moving, clear water with rocky or slightly muddy bottoms, and many were fully shaded by the dense canopy overhead. By far the most common species was the cyprinid Systomus (formerly Puntius) pleurotaenia, which could be found in dense shoals in nearly every stream and little creek. Coming in close second in terms of abundance was the extraordinarily pretty combtail gourami, Belontia signata, which live in large aggregations close to shore, especially where there is overhanging or submerged vegetation. These colorful labyrinth fish would make attractive (if slightly bellicose) aquarium residents which would fare well with many commonly available barbs. Another aquarium-suitable endemic I encountered in these streams was the Ceylon sucker, Garra ceylonensis. This small, bold, algae- and detritus-feeder occurred in small groups in rocky areas. Several times I found multiple Garra had attached themselves to my feet while I was filming. 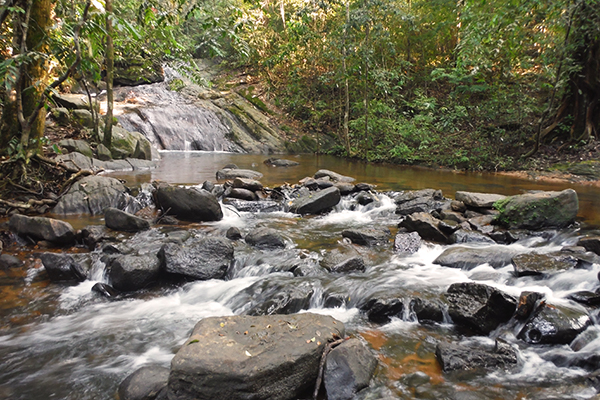 Fast-moving, clear water streams like this one are abundant throughout the forest

Although Sri Lanka tends not to be considered a hotbed of freshwater fish species, there is still an abundance of beautiful endemics and equally impressive aquatic habitats to be found on the island. I hope you enjoy the short video I compiled from my time in this remarkable protected forest.