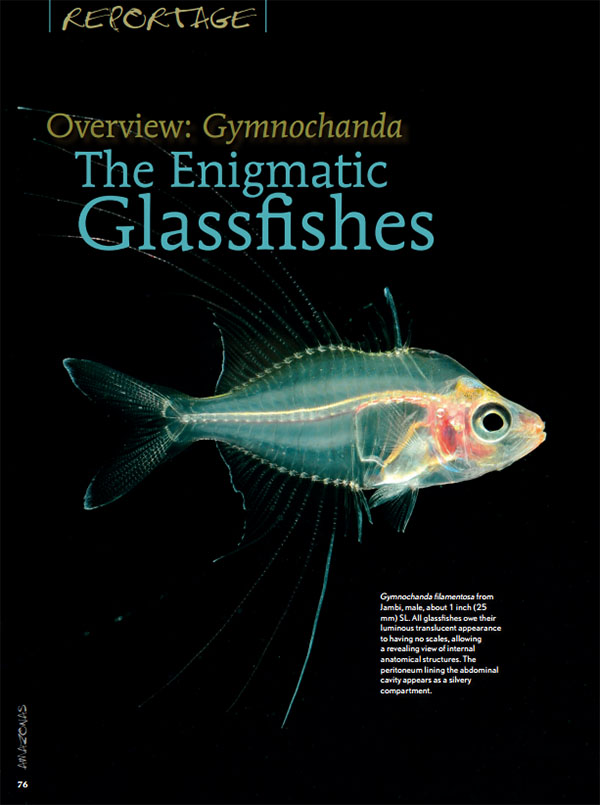 Although the delicate glassfishes, or glass perches, of the genus Gymnochanda are classic “old school” aquarium species, usually only specialists in unusual fishes from Asia keep them, and their identities have long been as enigmatic as their translucent anatomies. Now ichthyologist Tan Heok Hui of the Lee Kong Chian Natural History Museum in Singapore has written an overview for AMAZONAS.

The Gymnochanda glassfishes are all small Asiatic species that grow to no more than 0.9–1.3 inches (22–32 mm) long (SL) (Tan & Lim 2011). The biology of these species is poorly understood, but it appears that all species are restricted to open areas in brownwater habitats adjacent to peat and freshwater swamp forests (Roberts 1995, Tan & Kottelat 2009). The genus Gymnochanda currently contains the following five species in the family Ambassidae: 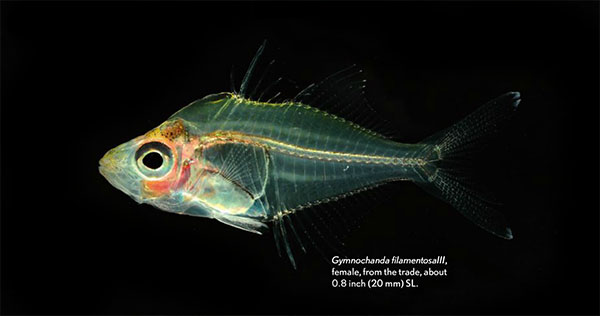 Gymnochanda filamentosa, female, from the trade, about 0.8 inch (20 mm) SL.

Description of the genus

The genus was described in 1955 by Fraser-Brunner, and the type species of the genus was Gymnochanda filamentosa. In 1957 Boeseman received specimens of the same species and described it under exactly the same name without knowing about Fraser-Brunner’s previously published description. This created a junior homonym.

This small, scaleless fish (adult size not more than 1.3 inches/32 mm SL) of the family of glassfishes or glass perches (Ambassidae) shows sexual dimorphism. In adult males, the first one to four rays of the anal fin and/or the second dorsal fin have thread-like extensions, which are not connected by the fin membrane and extend beyond its margin. Alternatively, they carry an enlarged fin with extended fin rays, which are completely connected by the fin membrane along their entire length. These fin modifications are often colored white or red in the distal margins. Females have no fin extensions or modifications. The preorbital is heavily serrated at the distal edge and ridge, with three or four large protruding serrae; the supraorbital ridge is serrated rearward; the preoperculum (front gill cover) is heavily serrated at the bottom and rear edges and on the ridge. There is one tooth plate on the tongue base. The gill rakers are long and slender; there are 12 to 16 on the first gill arch. The sideline is complete. In life, the body is remarkably transparent. 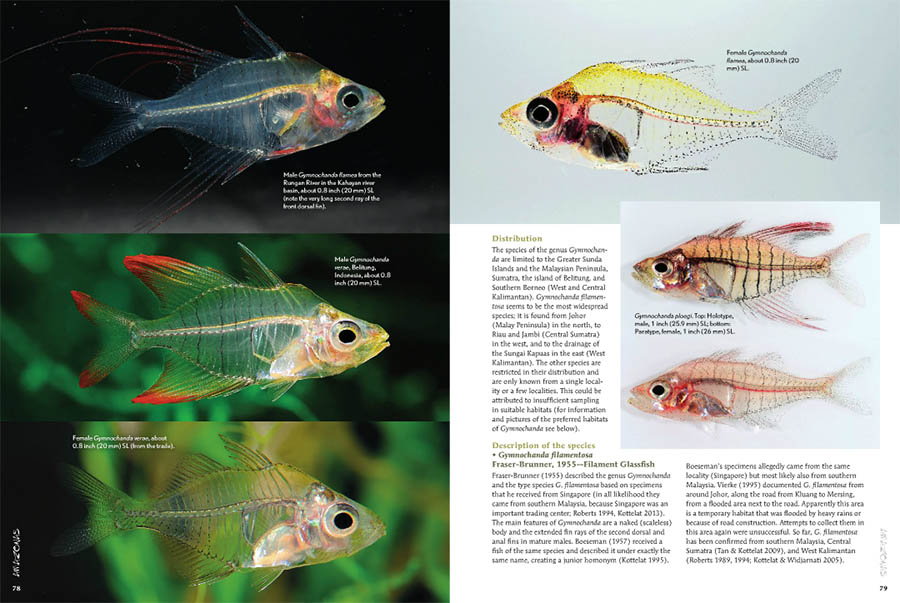 The species of the genus Gymnochanda are limited to the Greater Sunda Islands and the Malaysian Peninsula, Sumatra, the island of Belitung, and Southern Borneo (West and Central Kalimantan). Gymnochanda filamentosa seems to be the most widespread species; it is found from Johor (Malay Peninsula) in the north, to Riau and Jambi (Central Sumatra) in the west, and to the drainage of the Sungai Kapuas in the east (West Kalimantan). The other species are restricted in their distribution and are only known from a single locality or a few localities. This could be attributed to insufficient sampling in suitable habitats (for information and pictures of the preferred habitats of Gymnochanda see below).

Like what you’ve read so far? There is so much more in the July / August 2015 issue of AMAZONAS Magazine.  Don’t have access to the full issue? You can buy the back issue, read it in the digital archive, or subscribe now (all our subscriptions include full digital access to the online edition as well as our apps).

Here’s a glimpse at the rest of the article: 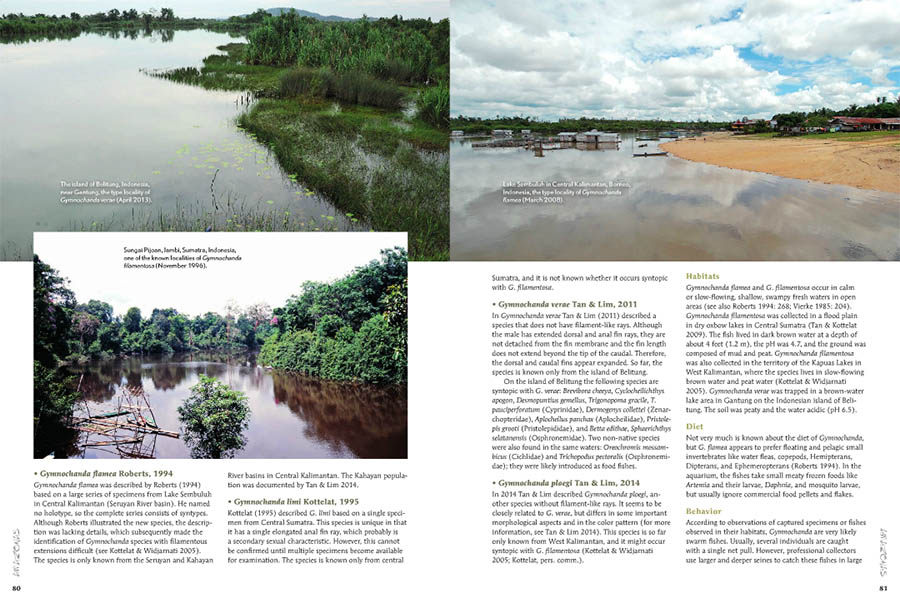 Species descriptions, habitats, diet, and behavior are all covered on subsequent pages of this article. 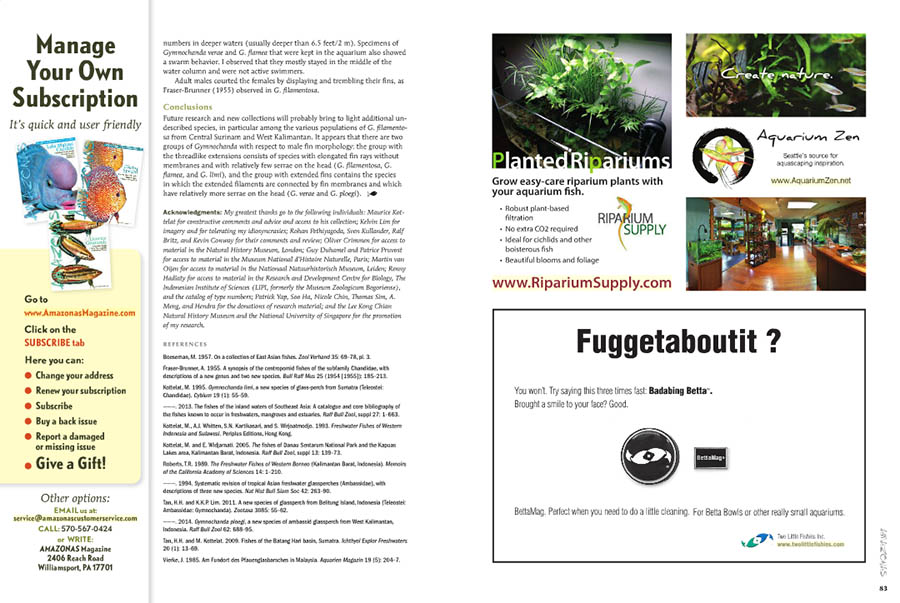 More on behavior, as well as acknowledgements and further references for the Glassfish enthusiast!