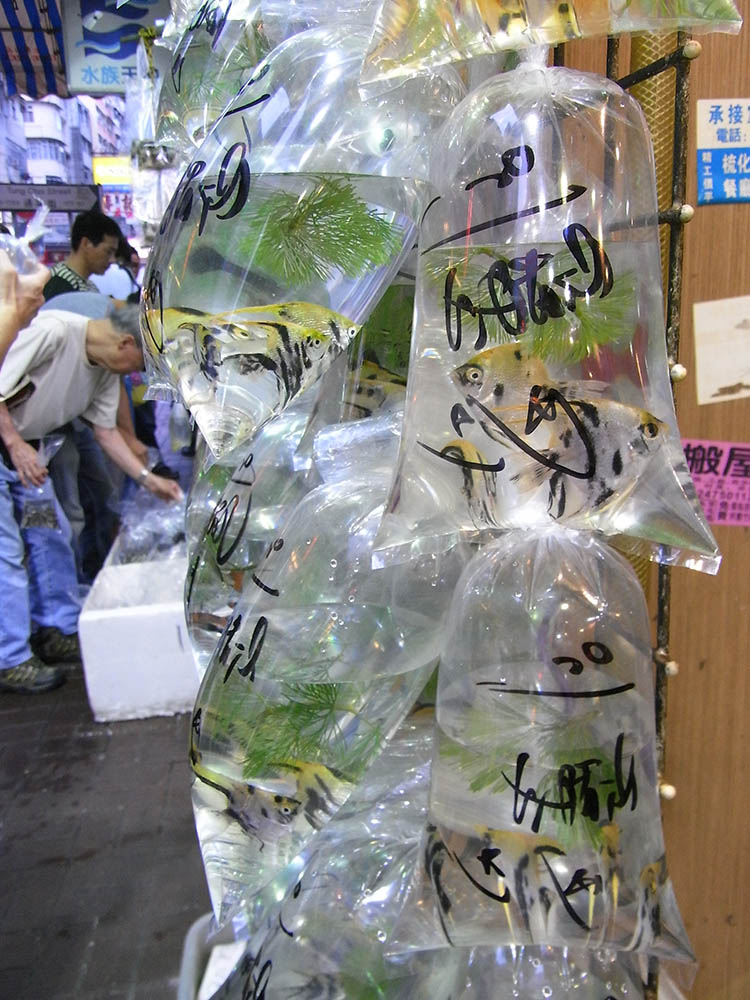 Gold Marble Pearlscale Angelfish being offered for sale in a Hong Kong aquarium fish market. Depending on the bags used, aquarium fishes may be poisoned by a manufacturing chemical that can contaminate food-grade shipping bags. Image by Kamscharmog | CC BY SA 3.0

press release via Haereticus Environmental Laboratory
Clifford, Virginia – Plastic bags can be poisonous. A scientific study published by researchers at Haereticus Environmental Laboratory and the University of Maine shows that a chemical in plastic bags made to U.S. FDA food-grade specifications can leach from the bag into seawater at such high concentrations that it can be deadly to fish. This chemical, called nonylphenol, can accumulate in plastic bags containing seawater to concentrations of 163 parts per billion (ppb) in less than 48 hours. The U.S. EPA Water Quality Criteria for acute exposure of nonylphenol in seawater is 7 ppb; concentrations seen in this study were almost 25 times higher than what is considered a danger to marine organisms.
Plastic bags are used extensively in the aquarium trade (i.e. pet stores), to ship fish and other invertebrates from the wild to pet stores. It’s also often used by customers to bring their purchases home from the pet store to put in their own aquarium tanks. The researchers placed a species of cultured coral reef fish in these bags for 48 hours to emulate the time most coral reef organisms are kept in the bags when shipped from the wild and exported to the U.S. or Europe. The plastic bag from one manufacturer, but not from another, killed 60% of the fish within the 48 hour incubation. Fish that survived being held in the bags all died within 8 days of being released from these bags into an aquarium. Dr. Downs, one of the authors of this study said, “This may explain why so many fish brought home from the pet store die soon after being placed into the owner’s aquarium tank. It may not be an issue of acclimatization of the fish to the tank, but the fish being poisoned before the customer ever gets it home.” 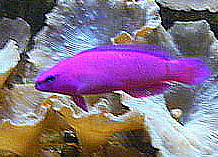 Pseudochromis fridmani, the fish used in this study. WikiMedia Commons

The scientists discovered that for this species of coral reef fish, the concentration of nonylphenol that kills half the population in 48 hours (LC50) is 175 ppb – very close to the concentration of nonylphenol found in seawater in the bags. Fish that had died in the plastic bags had concentrations of nonylphenol in their bodies as high as 400 ppb.
How did this chemical get into the plastic bags? Nonylphenol is used in the manufacturing of plastic bags, as well as in the “slip agent” that coats plastic bags that allows the plastic bag to be easily opened. The scientists discovered other chemicals in the plastic-incubated seawater, including slip agents such as oleamide, indole, and eruclamide.
There are several major implications of this study to coral reef and marine conservation. If the aquarium trade industry is using toxic plastic bags to ship all their products from coral reefs to a consumer’s aquarium tank, how much of their product is destroyed before it ever makes it to the consumer? This is a critical conservation issue, because fish or corals that are lost in transit means more fish and coral that need to be taken from the wild to meet inventory demand. It is a serious problem for environmental conservation and management of coral reef natural resources.
The other implication is how much nonylphenol is leaching from plastic bags and containers found on beaches and in the great oceanic “garbage patches.” If nonylphenol is leaching from plastic and polluting our coral reefs, beaches, and oceans, then how badly are we poisoning our oceans? Prof. Alex Rogers of the University of Oxford, says, “This raises significant concerns with respect to the contamination of the marine environment directly from nonylphenol, and also by plastics which potentially leach the material into the environment. Microplastic particles have now been found pretty much everywhere in the ocean, including the deep ocean where we have found them in sediments and also on the surfaces of deep-sea corals. This new evidence of toxicity associated with plastics (and other human products) is a great concern and given the other threats to the ocean, is something which needs close attention by scientists, policymakers and industry immediately.” Questions such as how much nonylphenol may be in the fish we are eating, and are they at levels that pose a threat to human health, are now pertinent.
Nonylphenol is not just an acute poison at high concentrations. It is an infamous endocrine disruptor at very low concentrations. It mimics estrogen, and low concentrations can cause feminization of fish, resulting in sterility of populations – threatening the existence of species. As noted toxicologist, Prof Louis Guillette, comments, “This is a well done study that indicates that not all plastic is ‘created equal’ even when labeled as identical. My concern is not only with the fish in this study – but……what happens when food for children or pregnant mothers is stored in bags with a formulation similar to that of the PE2 bags in this study? We know that nonylphenol is an endocrine disruptor at lower concentrations as well as toxic at higher concentrations. Future studies need to survey a greater number of sources for such bags to determine the extent of the potential exposure and risk such bags have in various industries, whether for the transport of fish or food.”
This study is referenced as: Hamlin HJ, Marciano K, Downs CA (2015) Migration of nonylphenol from food-grade plastic to the coral reef fish Pseudochromis fridmani. Chemosphere 139:223-228. http://dx.doi.org/10.1016/j.chemosphere.2015.06.032
### 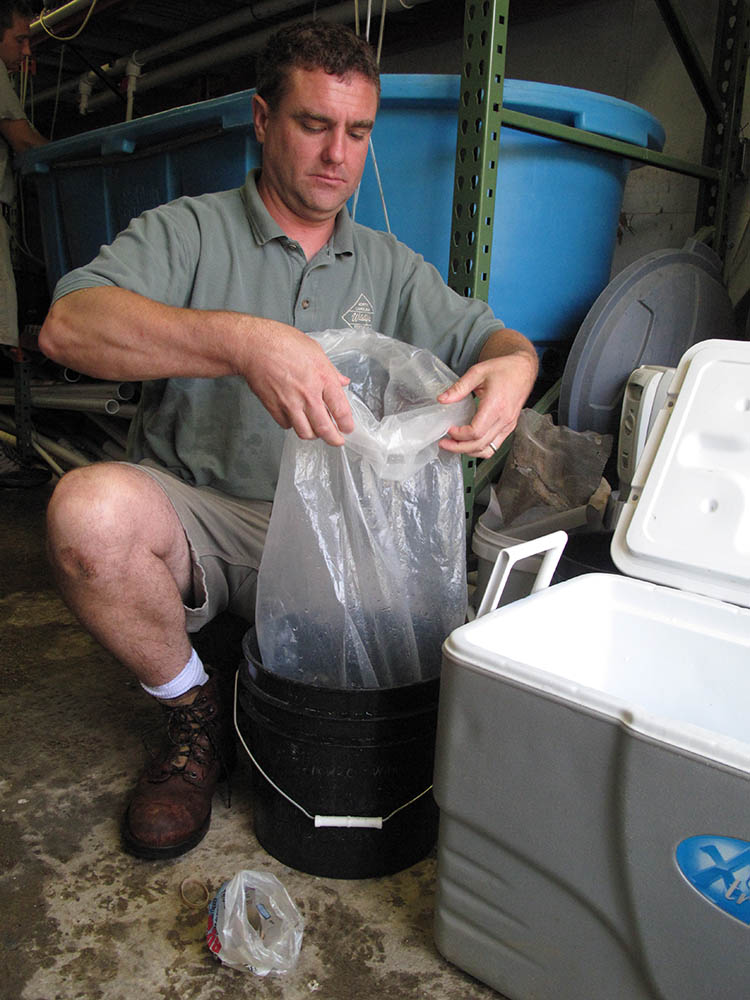 Peter Lamb of the USFWS preparing a bag of spotfin chub for the trip to the Cheoah River – Photo credit: Gary Peeples/ USFWS  | CC BY 2.0