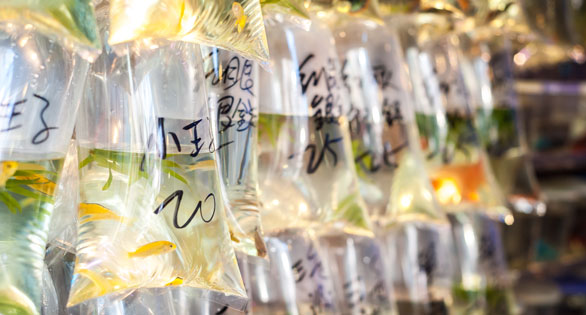 The aquarium trade relies on polyethylene plastic bags that may leach toxins that can kill or impair livestock. Fish bagged for sale in the Mong Kok Market, Hong Kong. Image: R. Nagy/Shutterstock. 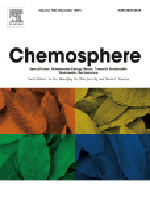 The study’s results, published in the article Migration of nonylphenol from food-grade plastic to the coral reef fish Pseudochromis fridmani, raised concerns about possible issues in the aquarium trade, but also had some aquarists raising questions about the study itself.
Over the course of a number of email exchanges between CORAL Magazine and one of the study’s co-authors, Craig A. Downs, Ph.D. (of HEL), many of these concerns were addressed and other related issues raised (for example, potential problems with plastics in the aquarium use beyond just shipping bags).
An additional conversation between CORAL reader Joshua Wiegert of Batfish Aquatics, and study co-author Heather Hamlin, Ph.D, reproductive endocrinologist at the University of Maine’s School of Marine Sciences, focused on some of the questions that the public was pondering.
What follows are some excerpts from these conversations, woven together in the form of a digital roundtable discussion.

Matt: Can you give me some background on the Haereticus Environmental Laboratory, based in Clifford, Virginia, and the work you do there?
Craig: We are one of the world’s best ecotox organizations.
One of my specializations is endocrine disruption/toxicology (I do environmental forensics). We have a big project with US NOAA on endocrine disruptors in the water surrounding the Florida Keys – endocrine disrupting chemicals as being responsible for Coral Zombies – sterile coral. Spawnings are horrible, and corals that spawn have gametes that are so poor that they don’t fertilize, or planula that do form soon die after fertilization. There are a number of factors in the water that are affecting embryogenesis of many coral reef species. Some are endocrine disruptors (e.g., nonylphenol, 17B-estradiol), while other are metabolic toxicants that at low concentrations suppress virility. [Editor’s Note: see CORAL Magazine 2012 article by Martin A. Moe about Endocrine Disruptors in the Florida Keys.] 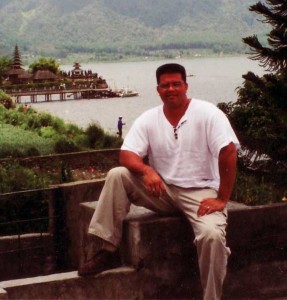 Dr. Craig A. Downs, a few years back when working for NOAA. 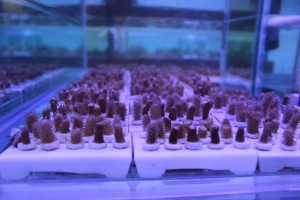