With our deepest sorrow, we announce that Takashi Amano, President & CEO of Aqua Design Amano Co., Ltd., passed away after an illness on Tuesday, August 4, 2015.

We convey our deepest gratitude to those who have favored him with valuable cooperation and support.

The wake and private funeral will be held by close family members only.

To follow the wishes of Mr. Amano, we respectfully decline any condolence gifts.

Details of the farewell ceremony will be announced, later.

Takashi Amano passed away on August 4th, 2015, dying from pneumonia while being treated for cancer at the age of 61. He left this world having created another world within: the Nature Aquarium World.

It is not hyperbole to say that, were it not for Takashi Amano, aquascaping, and the art of the planted freshwater aquarium, would not be what it is today. With the 1994 publication of Nature Aquarium World: How You Can Make A Most Beautiful Aquarium, Amano entirely redefined the planted aquarium, or as it became known through him, the “Nature Aquarium.” While Amano certainly wasn’t the first to ever aquascape with plants, a new aesthetic bar had been set, and the planted freshwater aquarium became a visual feast, potentially on par (or in some opinions, surpassing) even the most flamboyant saltwater reef aquariums of the day. Nothing like it had ever before been presented to western aquarists

Amano is credited for introducing the Nature Aquarium concept to the aquarium world, and these days it is perhaps the dominant aquascaping form. Fellow AMAZONAS contributor George Farmer recently described Amano’s signature style in his series the AquaScaper. “The concept relies on bringing a sense of nature from outside into the aquarium. Heavy use of wood and rocks are typical of a Nature Aquarium aquascape and planting is rarely very formal, with more emphasis on creating something that looks natural. This is in stark contrast to the formality of the Dutch aquascape. The Nature Aquarium style can be divided into further categories including Iwagumi, Ryuboku and Diorama…”

Since Amano’s introduction to audiences outside his native Japan, aquascaping as an aquarium pursuit has grown by leaps and bounds. Under Amano’s leadership, Aqua Design Amano set a standard for the re-creation of Amano’s Nature Aquariums by aquarium hobbyists around the globe. High-end products and solutions further elevated the art of the planted aquarium, and a better understanding of aquatic plant needs and management brought plants out of simply being “functional decor” to being the primary focus of the aquarium. With the establishment of the International Aquatic Plant Layout Contest in 2000, a venue for competition was established, elevating the status of aquascaping aquariums in the process.

Amano’s innovative approach to aesthetic design is arguably responsible for creating an entire industry within the aquarium industry, with multiple companies now squarely focused on providing materials and even plant life specifically for the freshwater planted tank. In larger cities in the US, there is now even a subset of aquarium retailers focusing on this aquarium hobby niche, not unlike the marine-only or reef-specialist vendors and retailers. We feel it is fair to credit the works of Amano as truly inspiring a new market and category of aquarium keeping the world over.

In the most recent years, Amano’s highest profile accomplishments centered around the creation of ever-larger Nature Aquarium displays. In 2012, the installation of two Nature Aquariums, including 4-meter and 7-meter installations, occurred at the Sumida Aquarium in Tokyo Sky Tree Town. The Sumida Aquarium project was well-documented through ADA’s YouTube channel; watch Part 1, Part 2, Part 3, Part 4 (Final), and a followup video on the ongoing maintenance of these aquariums.

Read another Tribute to Takashi Amano by Steve Waldron, AMAZONAS Contributor and founder of Aquarium Zen in Seattle. 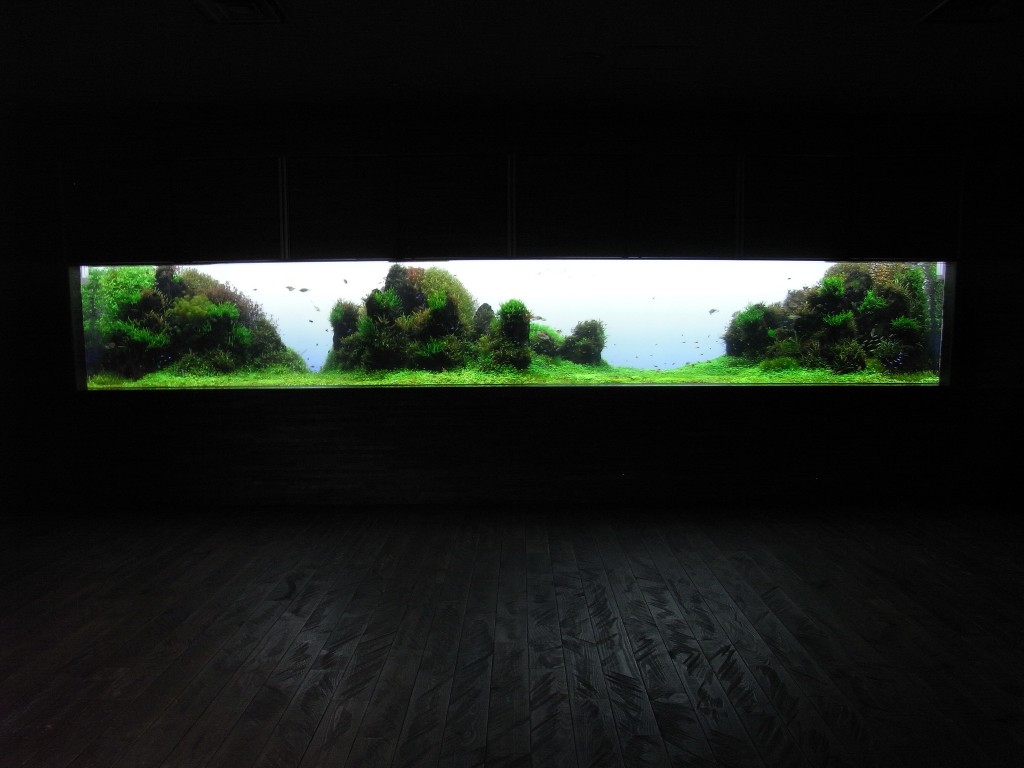 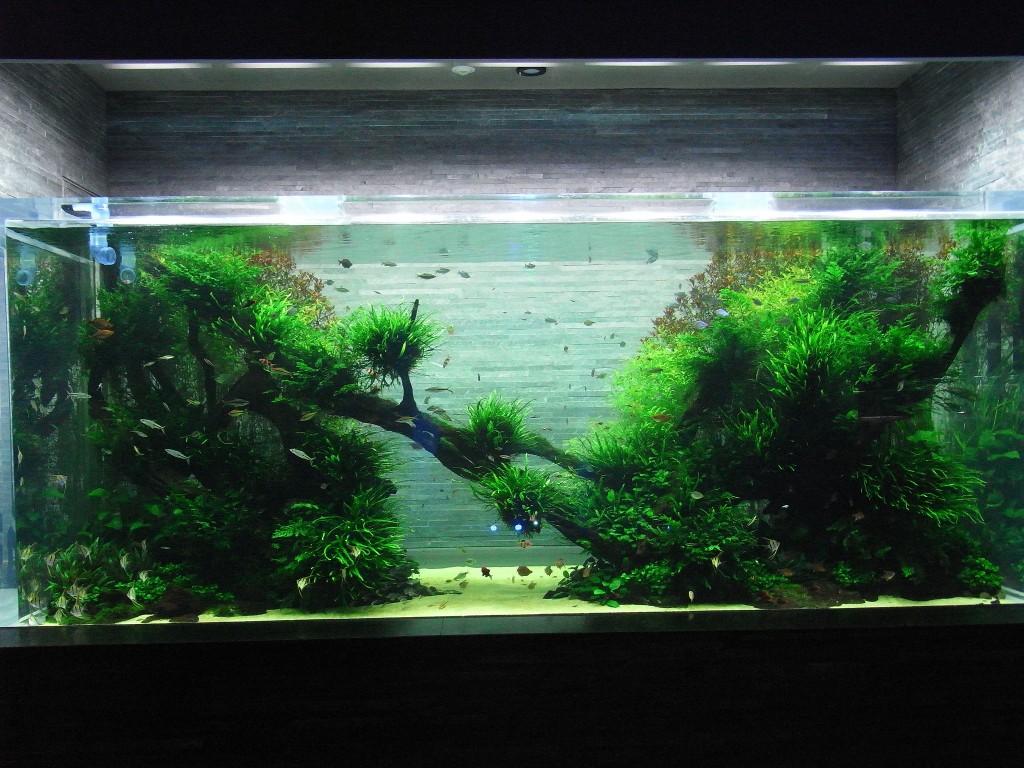 Amano and his ADA team returned to Sumida Aquarium in 2013 to add two additional Nature Aquariums, again documented via YouTube in Part 1 and Part 2. 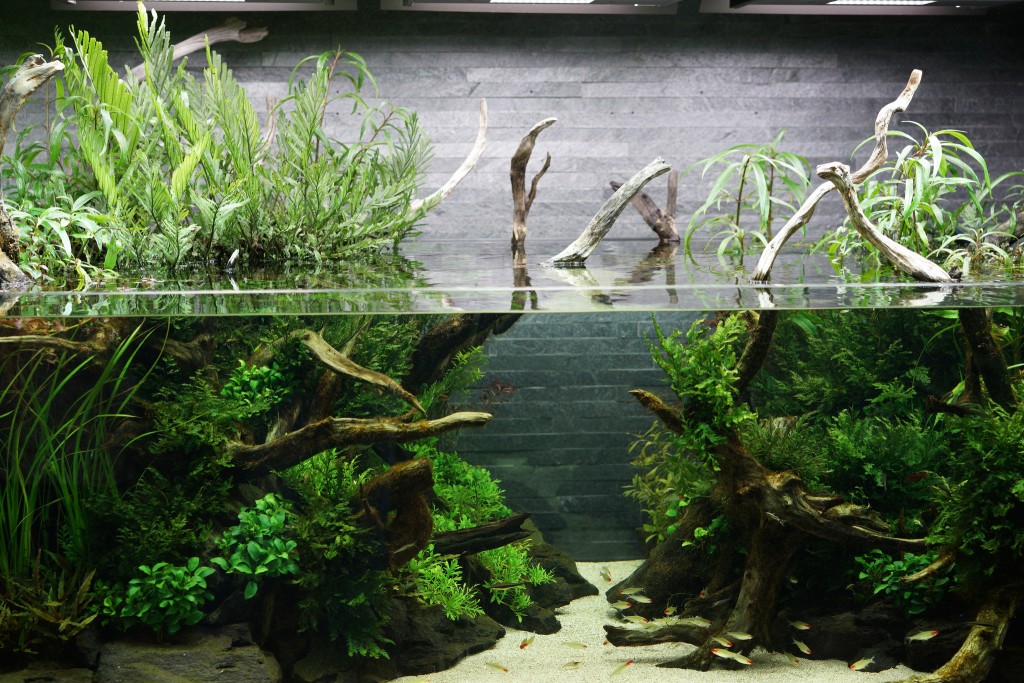 The first 2013 addition by Amano at Sumida Aquarium. Image by Flickr photographer Zengame | CC BY 2.0 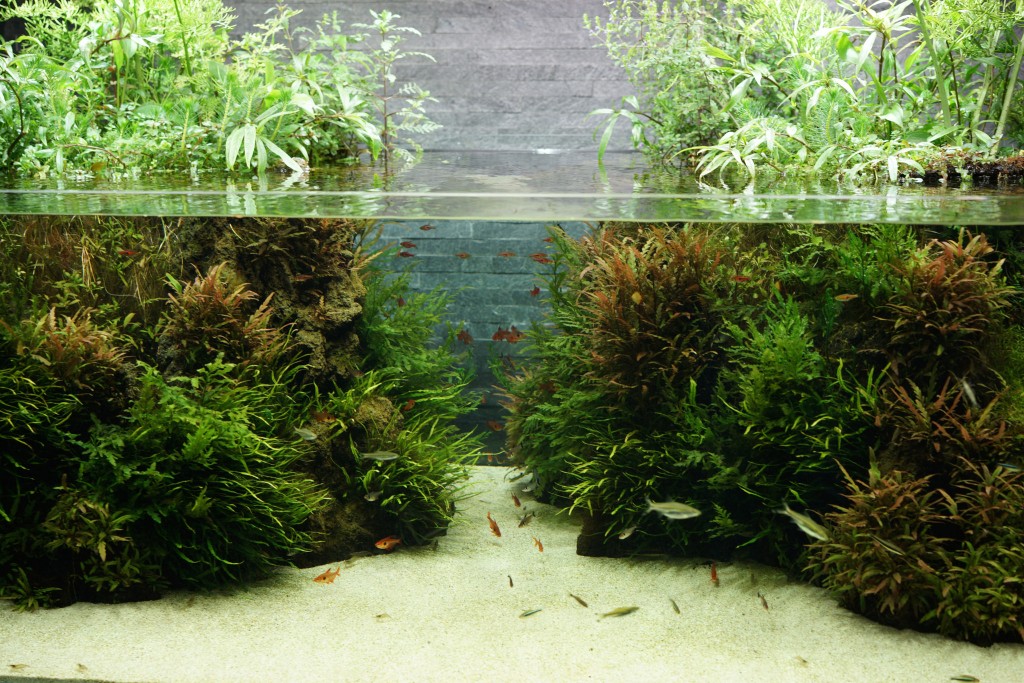 However, all of these aquariums are dwarfed by the 40-meter Nature Aquarium, a display called Florestas Submersas (Forests Underwater), installed by Amano and his ADA team earlier this year at Oceanário de Lisbo on January 28th, 2015. Once again, the project was thoroughly documented by ADA, viewable here in Part 1, Part 2, and Part 3. An overview of the final installation is in the video below.

Speaking on April 21st, 2015, at the opening ceremony, Amano, as translated by ADA in the above video, shared his sentiments on the Florestas Submsersas project: “My passion poured into this work is to make more people interested in nature…I do hope that this aquascape will give people a pause to think of the importance of irreplaceable global environment…It would be my greatest pleasure if more poeple could have hearts to value nature.”

In remembrance of Amano’s life and his contribution to the aquarium world, the 2014 video The Movie of Aqua Design Amano touches on many aspects of Amano, the Nature Aquarium, and ADA as a company. To get a sense of just how broad Amano’s reach has extended, it is worth the 20 minute view.

“The whole idea of the concept that [I have] developed is found in our publications, products, and Nature Aquarium. And it will be living continuously…” – Takashi Amano, from The Movie of Aqua Design Amano, 2014.

Much will be written and said about Takashi Amano in the days and weeks ahead, and we have only touched on one aspect of the man and his life. The entire staff at Reef To Rainforest Media wish to express our condolences to Amano’s family and friends, his colleagues, and the staff of ADA. Indeed, his impact is immeasurable, and the inspirations of his life will continue to spread like ripples on the water’s surface.

Read another Tribute to Takashi Amano by Steve Waldron, AMAZONAS Contributor and founder of Aquarium Zen in Seattle.