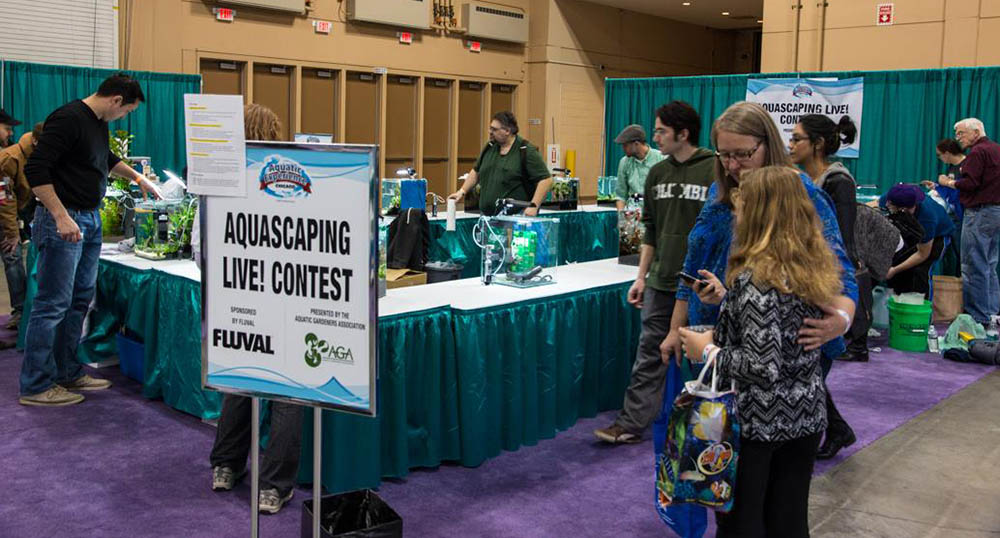 The 2014 Aquascaping Live! competition was very busy as entrants worked to complete their aquascapes during the show.

This coming November will mark the return of The Aquatic Experience—an aquarium expo combining every facet of the hobby—to the Chicago area. Now in its third year, this combined trade and hobby show is poised for another successful run with an impressive speaker lineup, dozens of exhibitors, and plenty of events and attractions. One of the events which debuted at last year’s Aquatic Experience and will be making a strong return next month is the Aquascaping Live! competition, in which dozens of aquarists will compete on the show floor to create a prize-worthy scape. 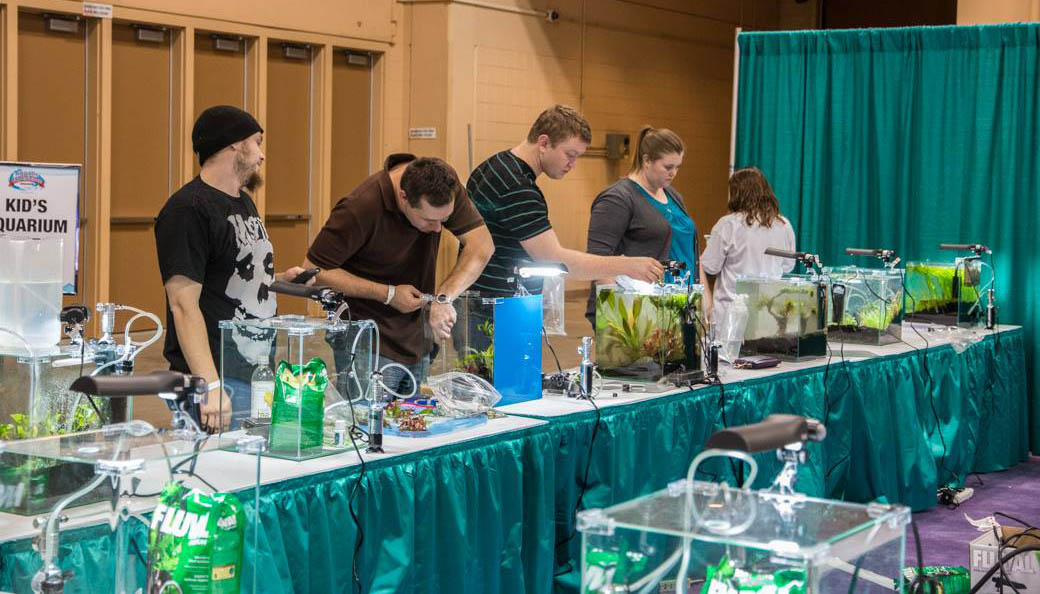 Aquascapers working fast to complete their entries for the 2014 Aquascaping Live! competition.

While aquascaping competitions are nothing new (the Aquatic Gardener’s Association’s annual contest being among the best known of these), the unique backdrop provided by a bustling crowd of over 5,000 attendees makes this competition stand out from the rest. Because attendees of the show come from a wide variety of backgrounds—from seasoned reef aquarists to relative newcomers—they are often not familiar with the increasingly popular art of aquascaping and last year’s competition drew a large crowd. Watching these aquascapes come to life in real time is undoubtedly one of the highlights of the weekend for many and a great way to inspire budding hobbyists to try their hand at planted, aquascaped tanks. 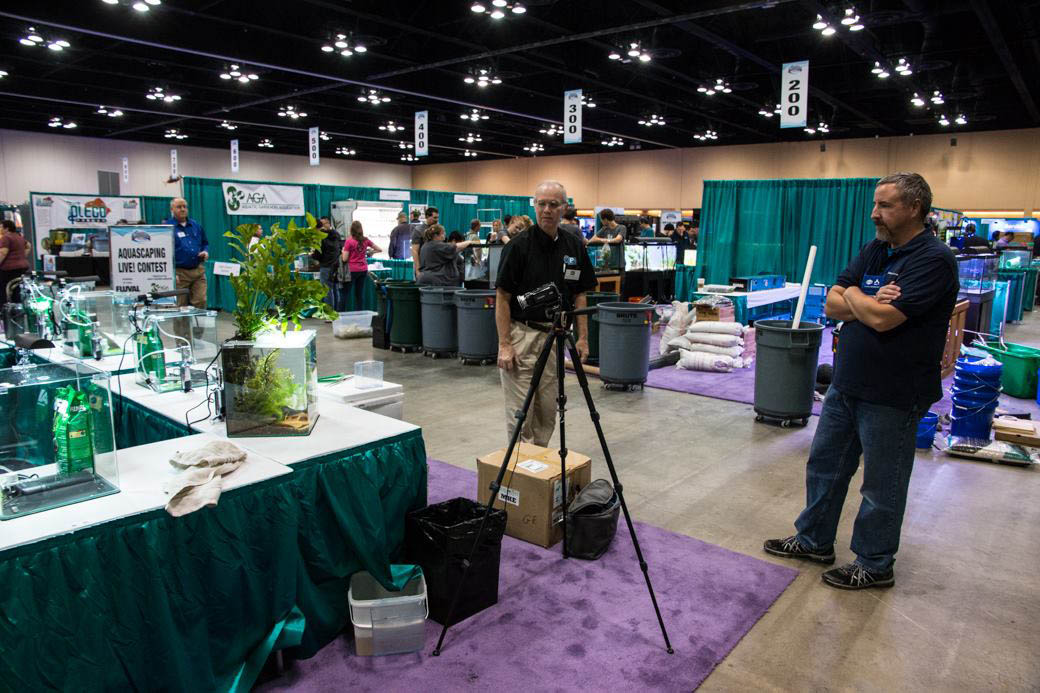 Ted Judy (right) steps back from his entry for a different point of view.

To discuss the particulars of this event, I reached out to aquascaper extraordinaire Karen Randall, a longtime board member of the AGA and judge for last year’s competition. When asked what stood out about the event in its first run, Randall replied: “seeing the camaraderie surrounding the entire competition was great, and even though the contestants were competitive, it wasn’t in a cut-throat sense. There was a lot of help between individuals and teams” 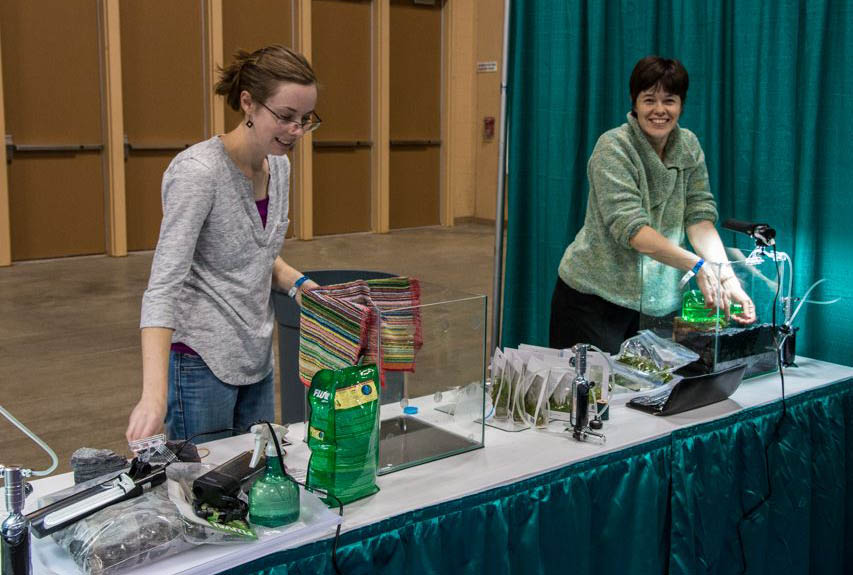 Clearly, the Aquascaping Live! competition was enjoyed by participants!

Randall also mentioned the positive interactions between the aquascapers, hard at work on their respective tanks, and the crowds gathering around to watch the work in progress. “We had AGA members standing around the competition to answer questions from the spectators, and the entrants were generally more than happy to talk to interested attendees even while working on their tanks,” she continued. 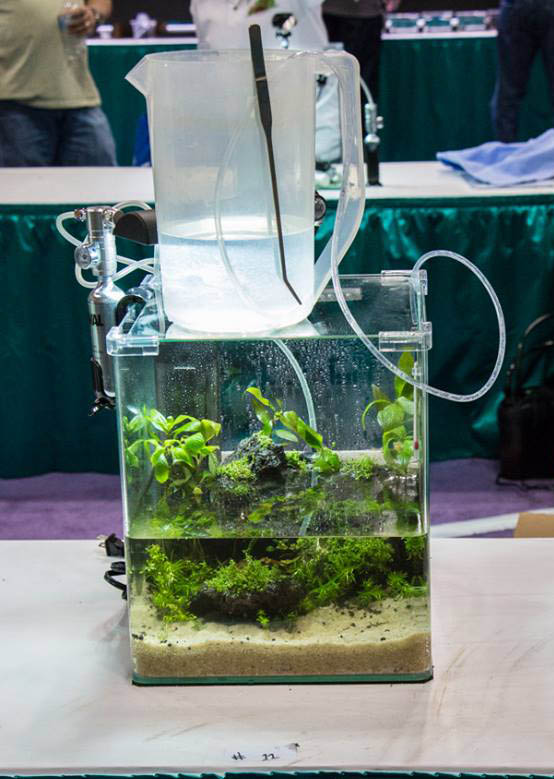 Taking great care not to disturb the substrate as water is added to the aquarium.

The competition has two tiers—small tanks, where individual contestants are provided with an 8-gallon glass tank to work with, and large tanks, where aquascapers work in teams on a 75-gallon setup. 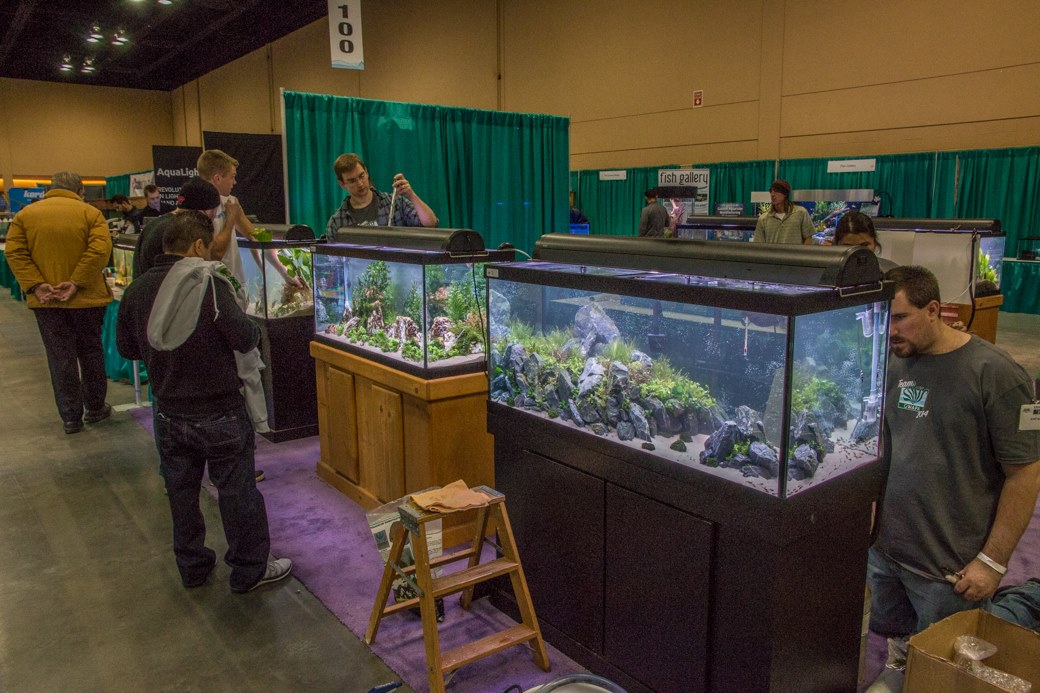 The large tank competition at the 2014 Aquatic Experience – Chicago.

“The large tank contest draws experienced aquascapers, and potential entrants must qualify before they can compete,” Randall explained, “while the small tank competition is open to anyone. We saw a tremendous range of abilities in small tanks last year, from novices trying their hand for the first time to seasoned aquatic gardeners.”

As far as judging goes, both contests were very close last year, and this year promises to be an equally impressive competition. With just over 5 weeks to go before the Aquatic Experience, Randall expressed excitement at seeing what contestants in the upcoming competition will create: “It’s great to see this competition growing in its second year, and we expect another successful event.”

The Aquatic Experience 2015 will be held November 6-8 at the Schaumburg Convention Center just outside Chicago, IL. For more information, visit www.aquaticexperience.org

More information on the Aquascaping Live! Competition, including registration for entrants, can be found here.

A selection of Large Tank entries from 2014

Another entry in the Large Tank category, this one featuring a large expanse of open sandy substrate.

A third entry in the Large Tank category from the 2014 Aquascaping Live! contest.

A selection of Small Tank / Nano entries from 2014 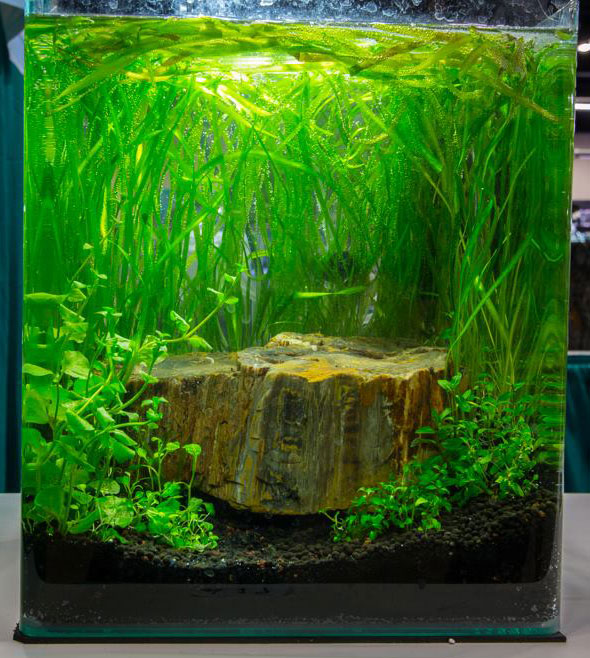 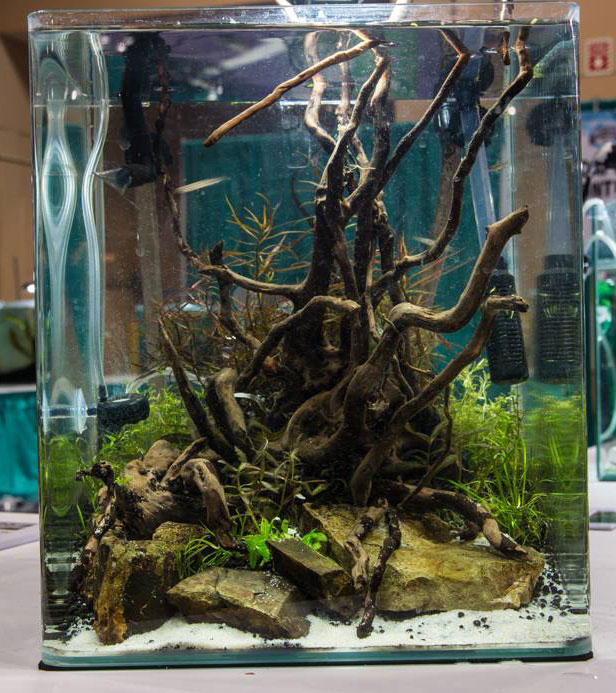 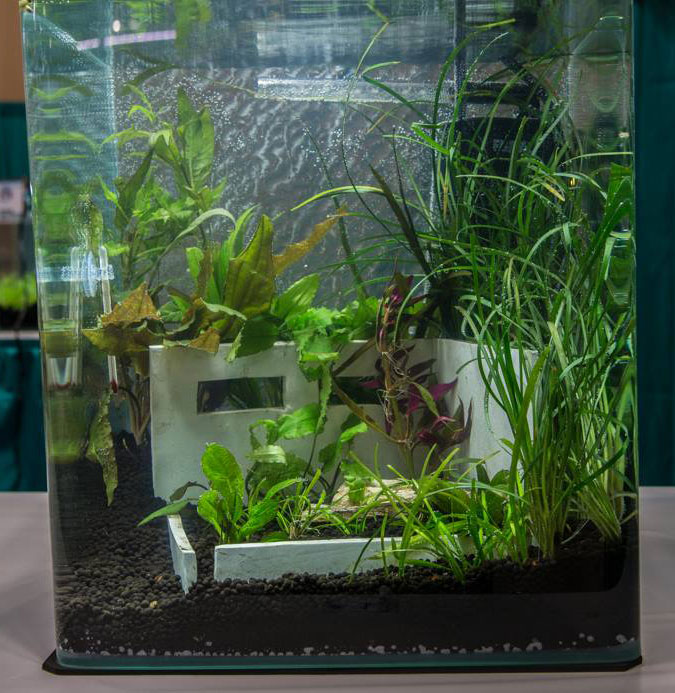 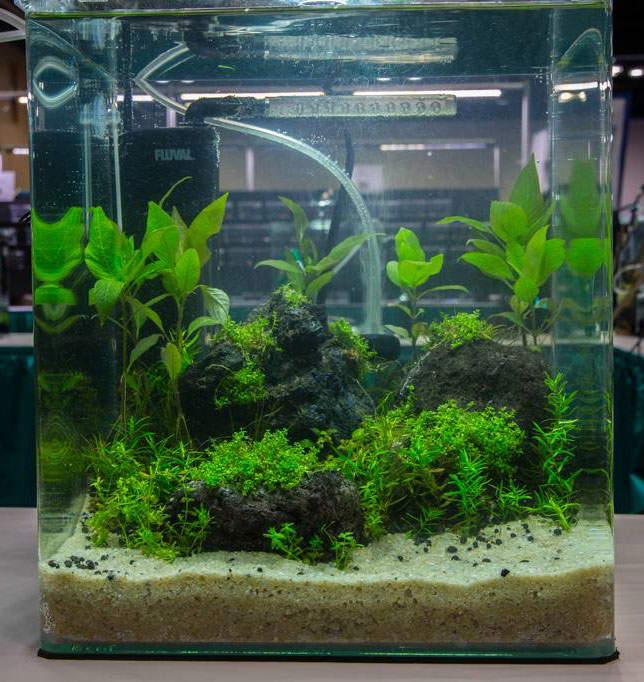 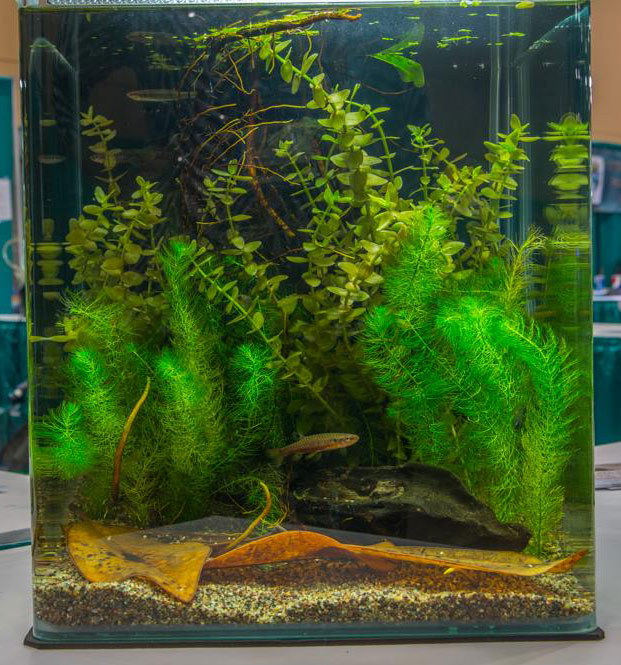 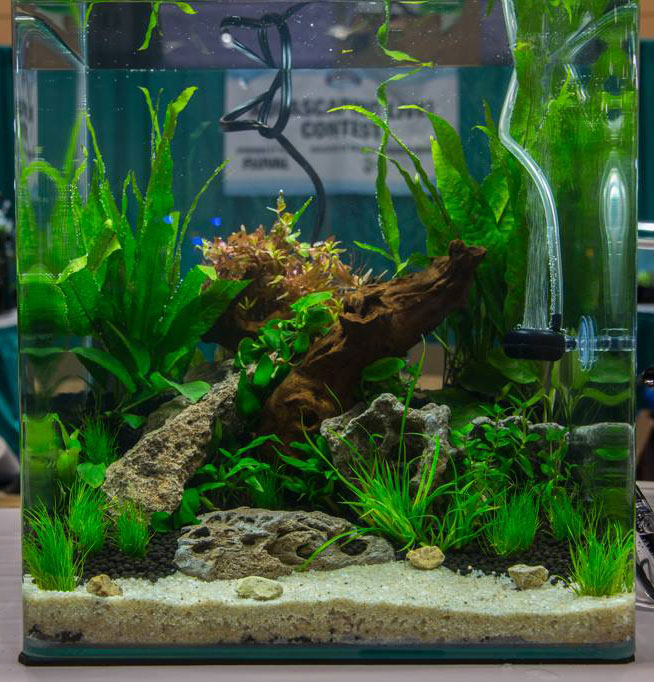 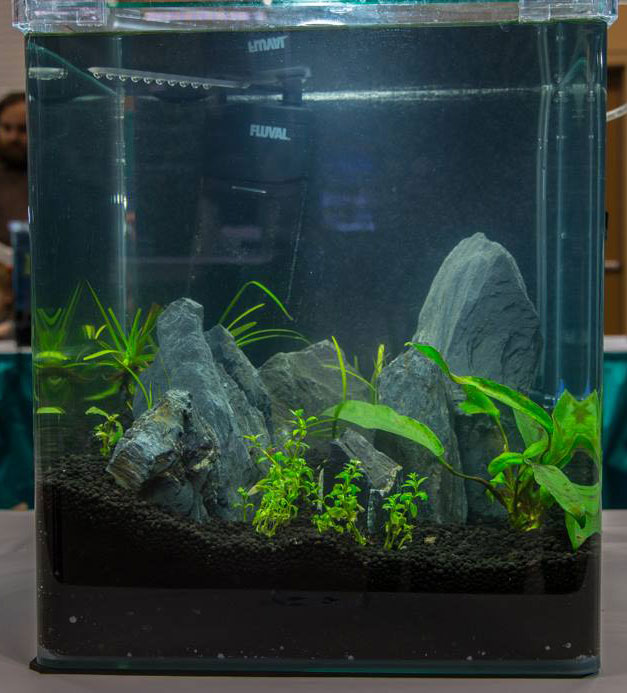