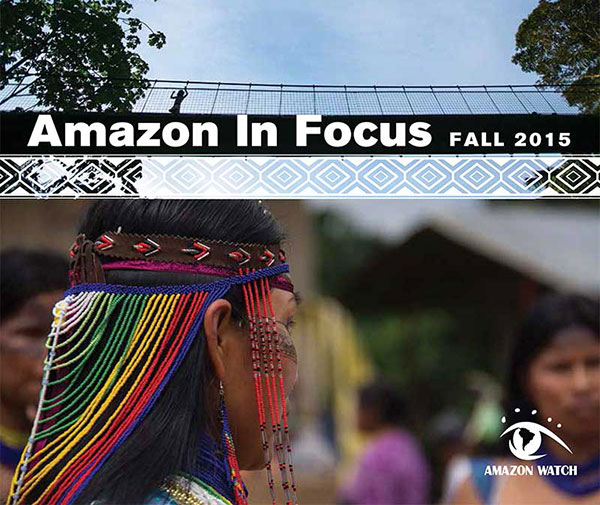 Cover of AMAZON in FOCUS 2015, the annual digest of environmental and humanitarian issues confronting the Amazon Basin and its peoples. Image: Amazon Watch.

Aquarium enthusiasts know Amazonia as a motherlode of biodiversity, and most of us are aware that we have the great Amazon watershed to thank for a huge proportion of the fishes and plants that populate the world’s freshwater aquaria.

While public awareness of the importance of the massive South American rainforest is grown tremendously in recent generations, some observers believe that one of Earth’s greatest ecosystems is in danger of being lost to human development.

According to informed observers, there are unprecedented forces at work that threaten the great Amazon Basin and its native peoples.

Among the primary concerns:

• Continuing widespread deforestation to provide land for agriculture (often production of beef and soybean for export) and development.

• Brazil’s aggressive national strategy of damming rivers in Amazonia to generate new supplies of hydroelectricity. Vast areas will be flooded, while others are allowed to drain and desiccate. Some are the ancestral homes of indigenous tribes as well as endemic plant and animal species, including many fishes found nowhere else.

• China’s expressed interest in extracting natural resources from the rainforest, including oil. At the same time, petrochemical interests are exploring the possibility of bringing “fracking” technology to the Amazon.

• Global shifts in climate that are bringing changes that are still far from fully understood.

• The losers in all of this: Hundreds of indigenous tribes faced with cultural extinction, and countless species of animals and plants in one of Earth’s greatest treasure chests of biodiversity

AMAZONAS Magazine readers who wish to stay informed about issues and events in the greater Amazon are invited to join with Amazon Watch, a leading defender of the Amazon rainforest and its peoples. 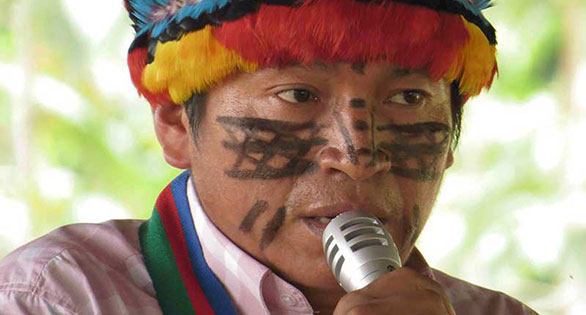 The Amazon: A Global Treasure

Rainforests sustain us. They help regulate the global climate and are vital to maintaining the earth’s fragile balance. The Amazon rainforest is the world’s largest and most biodiverse tropical rainforest, covering an area larger than the continental United States. It houses one-third of the Earth’s plant and animal species and produces one-fifth of all its flowing fresh water.

Nearly 400 distinct indigenous peoples depend on the Amazon rainforest for their physical and cultural survival. At current rates of deforestation, nearly 50 percent of the Amazon could be lost or severely degraded by the year 2020, and the vast majority will no longer be in a pristine state.

With global deforestation contributing 20–25 percent of all greenhouse gas emissions, Amazon Watch and our indigenous partners are providing a service to all humanity as we together seek to defend the rainforest. Each of us can take action. We may be the last generation that has a chance to protect this precious gem of our world’s cultural and ecological heritage – an irreplaceable source of life and inspiration.

Amazon Watch is a nonprofit organization founded in 1996 to protect the rainforest and advance the rights of indigenous peoples in the Amazon Basin. We partner with indigenous and environmental organizations in campaigns for human rights, corporate accountability and the preservation of the Amazon’s ecological systems.

We envision a world that honors and values cultural and biological diversity and the critical contribution of tropical rainforests to our planet’s life support system. We believe that indigenous self-determination is paramount, and see that indigenous knowledge, cultures and traditional practices contribute greatly to sustainable and equitable stewardship of the Earth. We strive for a world in which governments, corporations and civil society respect the collective rights of indigenous peoples to free, prior and informed consent over any activity affecting their territories and resources. We commit, in the spirit of partnership and mutual respect, to support our indigenous allies in their efforts to protect life, land, and culture in accordance with their aspirations and needs.