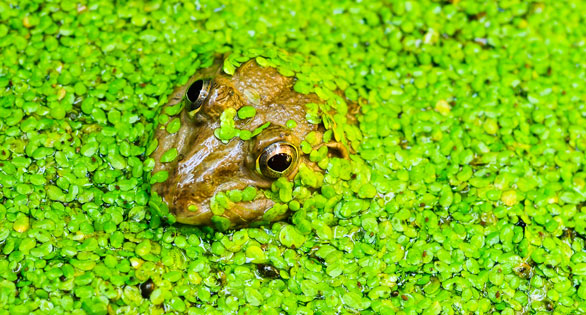 Common duckweed can help purify water, but it can also become a nuisance, choking an aquarium or water garden of light. Image: Wasu Watcharadachaphong/Shutterstock

Common Duckweed, Lemna minor, can be nature’s best friend at times, for example when it is used in bioremediation efforts to purify contaminated water. It grows explosively, each floating plantlet budding off two daughters in frenzied reproduction, and it can be used to remove pollutants such as nitrate, phosphate, and even spilled toxins from waterways and reservoirs. It can also be an invasive nuisance, smothering an aquarium or pond, choking off light to plants below and making maintenance sessions messy and unsatisfying. Any stray bit of duckweed missed in a cleaning session often seems able to rebound and quickly cover the surface of the tank.

I have had the problem of duckweed overgrowing the surfaces of my tanks for years, and skimming with a net is quite cumbersome. The only benefit I saw from having these prolific little pads growing in my systems was that any bound nutrients were removed from the aquariums when the masses of duckweed were removed.

Nevertheless, it’s a lot of work that takes time and feels like a losing battle, so I started thinking about how to accomplish the task more easily. When I looked at my internal power filter, it occurred to me to turn the whole thing upside down. This led me to design a Do-It-Yourself Duckweed Collector. 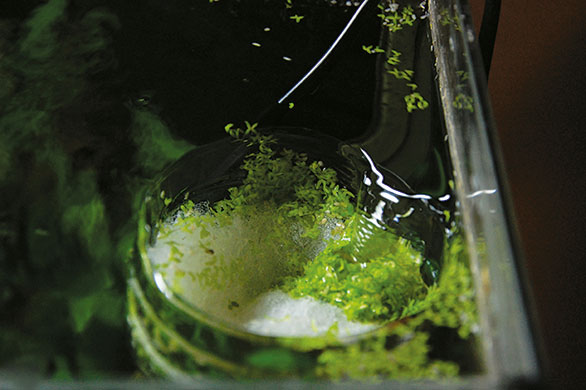 DIY duckweed skimmer quickly clears floating duckweed from the aquarium surface and traps it in a mat of filter floss.

I took a 1.6-quart (1.5-L) plastic bottle and cut the upper third of it off. The resulting funnel becomes the duckweed collector. However, the intake of the small powerhead water pump I used did not fit into the neck of the bottle. After trying some fittings that did not remotely fit, I cut a piece of garden hose that fit perfectly onto both the bottle neck and the pump intake. Depending on the pump you use, it may take some trial and error to get the pump and bottle joined, with aquarium silicone sealant also a possible solution for gluing the assembly together. (It does not have to be watertight or especially rugged, as it will be used submerged.)

I stuffed a little filter floss into the cut bottle, mounted the contraption in an aquarium that contained duckweed, and plugged it in. After I determined the optimal height at which to mount the collector to skim the water surface, it worked fine.

Since I had chosen a rather strong pump, the free-floating duckweed was pulled into the floss within a few minutes. To avoid having the duckweed go back into the aquarium when you go to empty your harvest of duckweed, you must pull the collector above the water’s surface before you switch the pump off.

I must admit that my design is not a beauty, and certainly cannot be used unobtrusively in your living room aquarium. However, for temporarily removing most of the duckweed from a tank, this collector is a fast and affordable option. 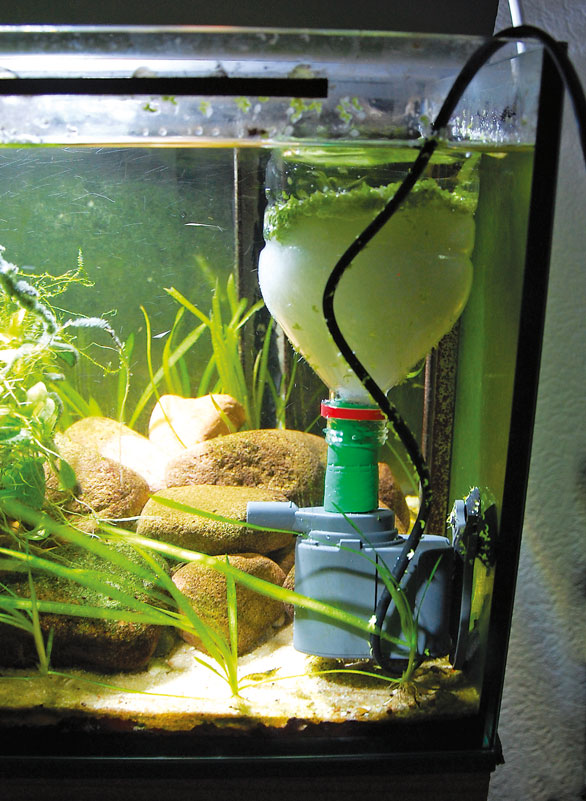 Not a thing of engineering beauty, but the author’s duckweed skimmer works and is only used during maintenance sessions.

• Duckweeds, or water lens, are flowering aquatic plants which float on or just beneath the surface of still or slow-moving bodies of fresh water and wetlands. Also known as bayroot, they arose from within the arum or aroid family (Araceae),[1] and therefore often are classified as the subfamily Lemnoideae within the Araceae

• Duckweed is an important high-protein food source for waterfowl and also is eaten by humans in some parts of Southeast Asia. As it contains more protein than soybeans, it is sometimes cited as a significant potential food source.[6] The tiny plants provide cover for fry of many aquatic species. The plants are used as shelter by pond water species such as bullfrogs and bluegills. They also provide shade and, although frequently confused with them, can reduce certain light-generated growths of photoautotrophic algae.

• The plants can provide nitrate removal, if cropped, and the duckweeds are important in the process of bioremediation because they grow rapidly, absorbing excess mineral nutrients, particularly nitrogen and phosphates. For these reasons they are touted as water purifiers of untapped value.