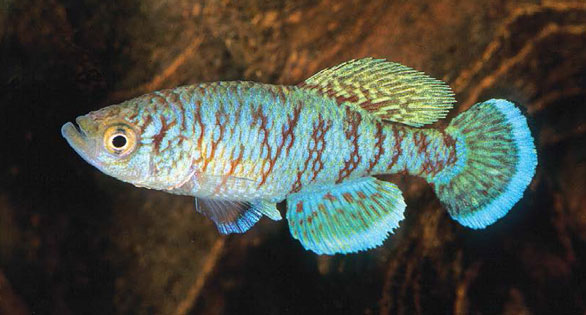 In a Special Notobranchius Issue of the Journal of the American Killifish Association (JAKA), the new species is described, along with an illustrated discussion of the environmental concerns for the future of this and other related species in the same region. The Caprivi Killifish, according to the authors, is in the category of “Near Threatened” under the IUCN Red List classification. It lives what seems to be a rather precarious life, having to survive the natural rhythms of flooding and seasonal isolation stranded in evaporating pools. They report that some local roadway improvements have helped move some populations out of harm’s way (see downloadble JAKA paper link below).

Killifish keepers who have experience with the species say that it is not a beginner’s fish but is neither too difficult to maintain nor to breed.

Distribution and migration of the Caprivi killifish, Nothobranchius capriviensis Watters, Wildekamp & Shidlovskiy 2015, an assessment of its conservation status, and a note on other killifish in the same area. D. Tweddle, B.C.W. van der Waal and R.A. Peel 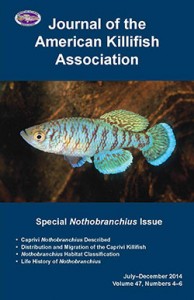 Nothobranchius capriviensis occurs in several ephemeral pans in eastern Zambezi Region of
Namibia, usually in isolation but rarely in association with other fish species. During flooding
episodes, however, N. capriviensis has been recorded at two road culverts at opposite
ends of its main distribution range centered on the Salambala Conservancy. On one occasion
the flow was inland from the Zambezi-Chobe floodplain during a high Zambezi
flood. On the other, the flow was in the opposite direction towards Lake Liambezi as a result
of very heavy rainfall draining from the Salambala Conservancy woodlands. On both
occasions, other small floodplain fish species were also present. Nothobranchius species are
thus shown to have the capacity to migrate to colonise, or re-colonise, pans that are then
isolated when floods subside. The recognition of N. capriviensis as a separate species necessitated
re-appraisal of its Red List status. Strict interpretation of IUCN Red List categories
necessitates placing it under “Near Threatened,” but any erosion of Salambala Conservency’s
protection status would immediately downgrade its status to “Endangered” under
Red List Criteria B2ab(iii). Five other killifish in Zambezi Region are illustrated here.

It has created an exceptional stir both among would-be breeders and conservationists, who believe it may be under extinction pressure because of development in Namibia that threatens it.