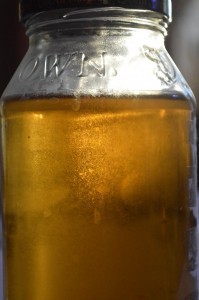 A vinegar eel culture in the author’s fishroom, about three years old, that probably hadn’t been touched for two years!

Vinegar eels, Tubatrix aceti, are one of those freshwater food cultures that I think too few people with aquariums have learned to use and appreciate. That said, they fill an important niche in fish culture, being larger than infusoria but smaller than microworms and baby brine shrimp.

One purveyor of live food cultures, the Bug Farm in San Rafael, California suggests the following uses for vinegar eels:

As a breeder of both freshwater and marine fishes, I prefer them over microworms for one simple benefit: unlike microworms, vinegar eels can live in freshwater for an extended period of time (possibly up to a week) and swim in the water column where baby fish are feeding (in comparison, microworms sink and die quickly). Vinegar eels are harmless nematodes, non-parasitic, and their lively wriggling actions make them highly attractive to aquarium fish fry.  (See Video link at bottom of this page.) 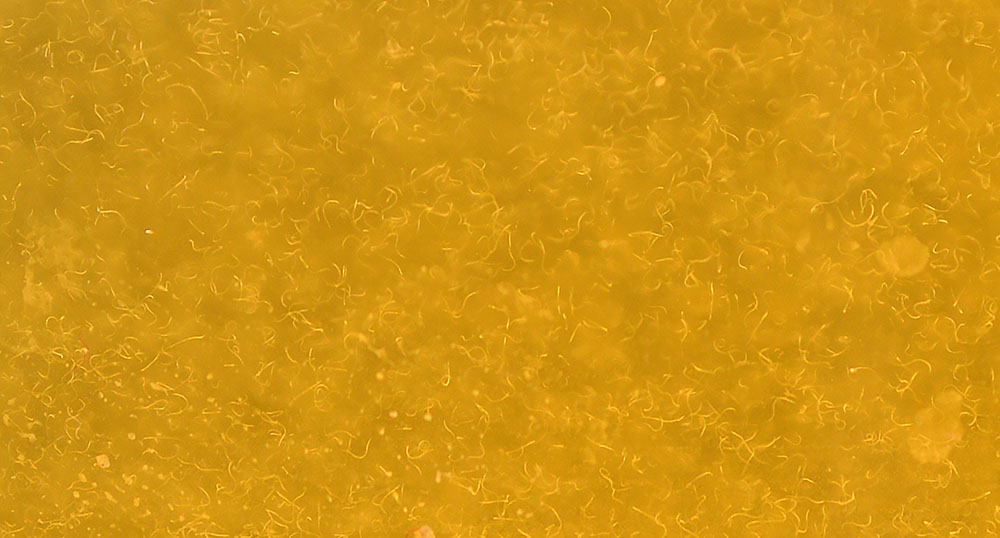 Vinegar eels aren’t really meant to be a long-term food, and some reports suggest that fishes reared solely on them don’t fare well. This is hardly surprising, given that something like a larval clownfish hits a wall at around 8-12 days, at which point it takes almost as much energy to eat and consume a rotifer as the rotifer itself contains. In short, vinegar eels are a stepping stone, a transitional or starting food until fry can consume larger, more energy- and nutrient-rich prey.

Vinegar eels are arguably one of the most fool-proof foods to culture. I believe I’ve had cultures simply persist, with no maintenance, harvest, or attention, for probably 2 years. Of course, you should probably pay closer attention to your cultures. Still, being so undemanding, vinegar eels are one of the few things you can always simply “keep around” (like brine shrimp eggs); in that regard, they can be ready whenever you need them.

Vinegar eels seem slower to culture and expand in population than other foods, although according to Wayne’s This and That, “A healthy culture can experience a 20-times increase in its population in only 8 days.” I’ve historically felt they take closer to a month to ramp up, and they cannot be harvested very frequently. Vinegar eels don’t seem to go very far or culture very densely, which means that devoting a little more space to their culture, and having multiple cultures running, are good ideas. Thankfully, these are just about idiot-proof when it comes to cultivation.

All you need is clean glass jars, some apple slices, and a starter culture. Seriously. 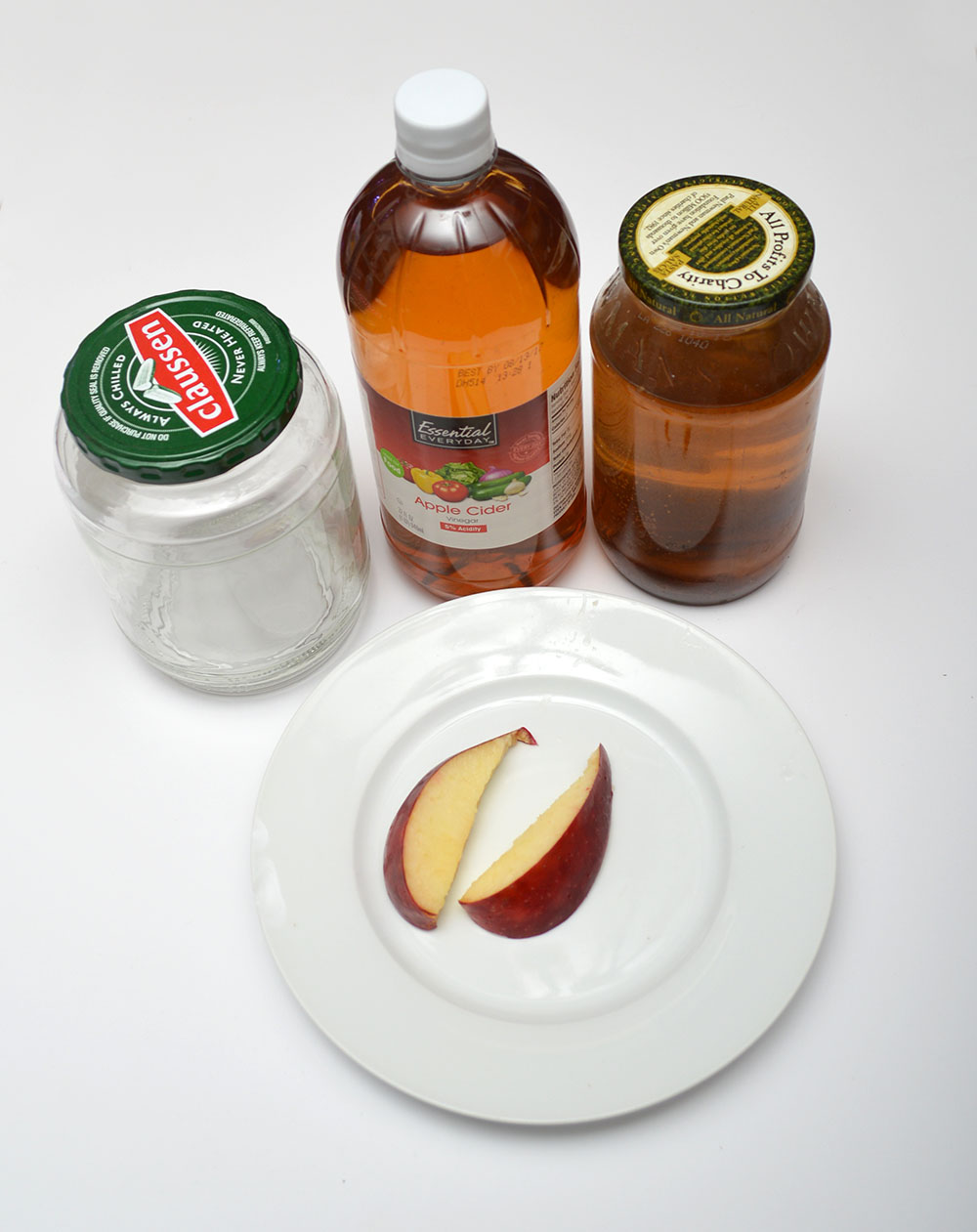 The raw materials to make a new culture: clean glass jar, apple cider vinegar, a slice of apple, and a starter culture. 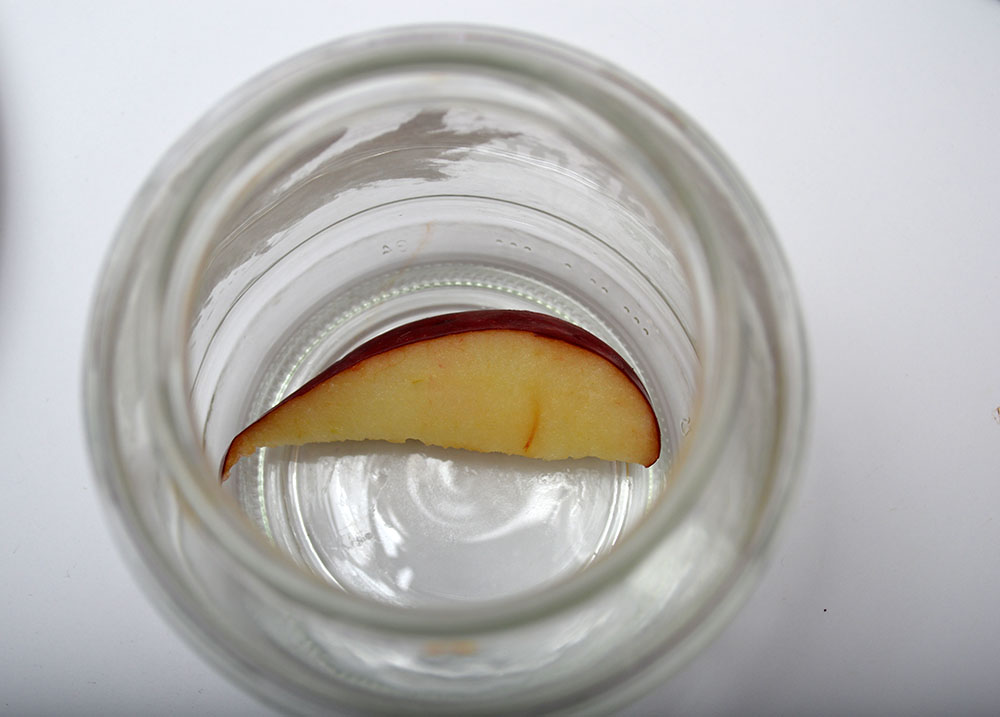 1. Place an apple slice in the clean jar. 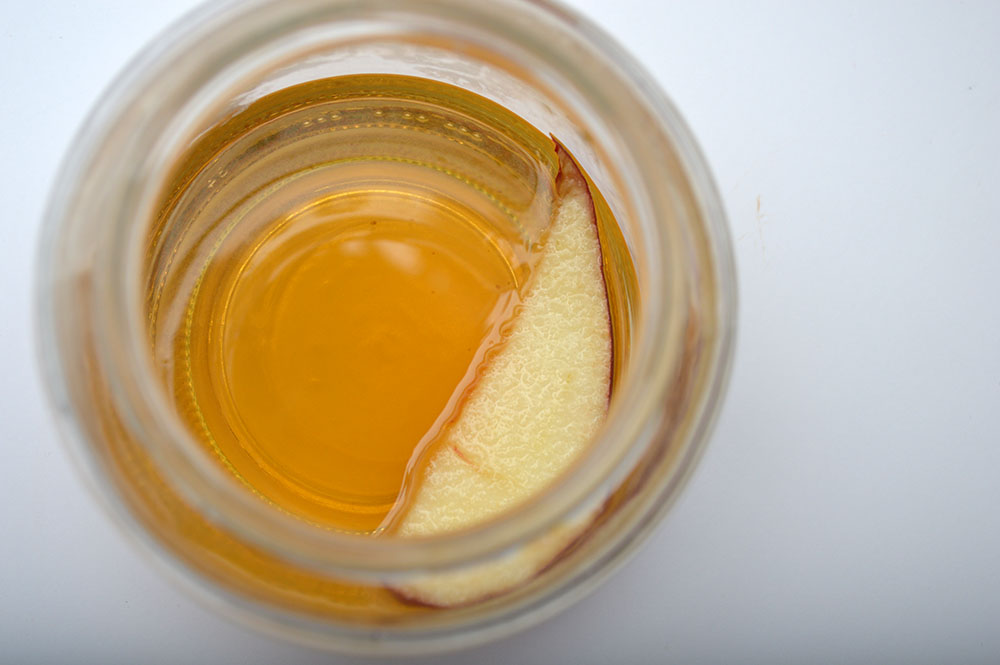 2. Add the starter culture, in this case a portion poured in from an existing culture. 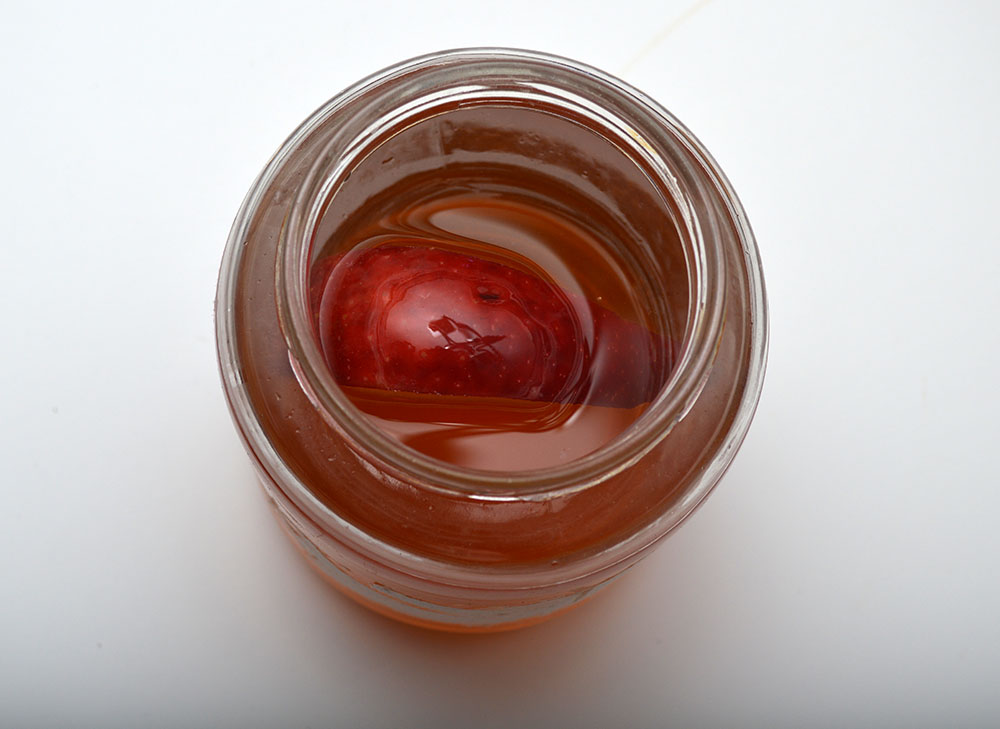 3. Top off with generic, store-bought apple cider vinegar. Add a lid, but just rest it on top (to allow gas exchange) and wait for the culture to fill in.

That’s it…the culture is started! To highlight a few key points: It is important to not firmly close the lid on the culture, but instead to keep a lid just resting on top, allowing the culture to breathe. I should note that while many culture methods suggest using a 50/50 mix of apple cider vinegar and water, I had far better results simply using undiluted apple cider vinegar. What this does for culture densities, I cannot say.

As an interesting side note, according to Ripley’s Believe It Or Not, you may even be able to start up a vinegar eel culture without any starter culture, although it takes about a month (see their website for the instructions). I may just have to try that out!

Harvesting Vinegar Eels From a Culture

Nothing so easy to grow comes without a price; I think the harvesting of vinegar eels is one of the things that makes people second guess culturing them in the first place. Still, there are MANY different methodologies, and doing something as simple as pouring a portion of your cultures through a paper coffee filter and rinsing the eels off afterwards certainly does not sound difficult to me. However, there’s a more clever way that I first demonstrated at a Minnesota Aquarium Society meeting. According to Killies.com, this method is known as the Wright Method, named for its inventor, Wright Huntley.

This method involves the separation of a culture with fresh water above it. As the culture water becomes deprived of oxygen, the vinegar eels swim up and into the fresh water, where they can then be easily harvested and fed; this way, there is no vinegar entering your tanks. Here’s how you do it: 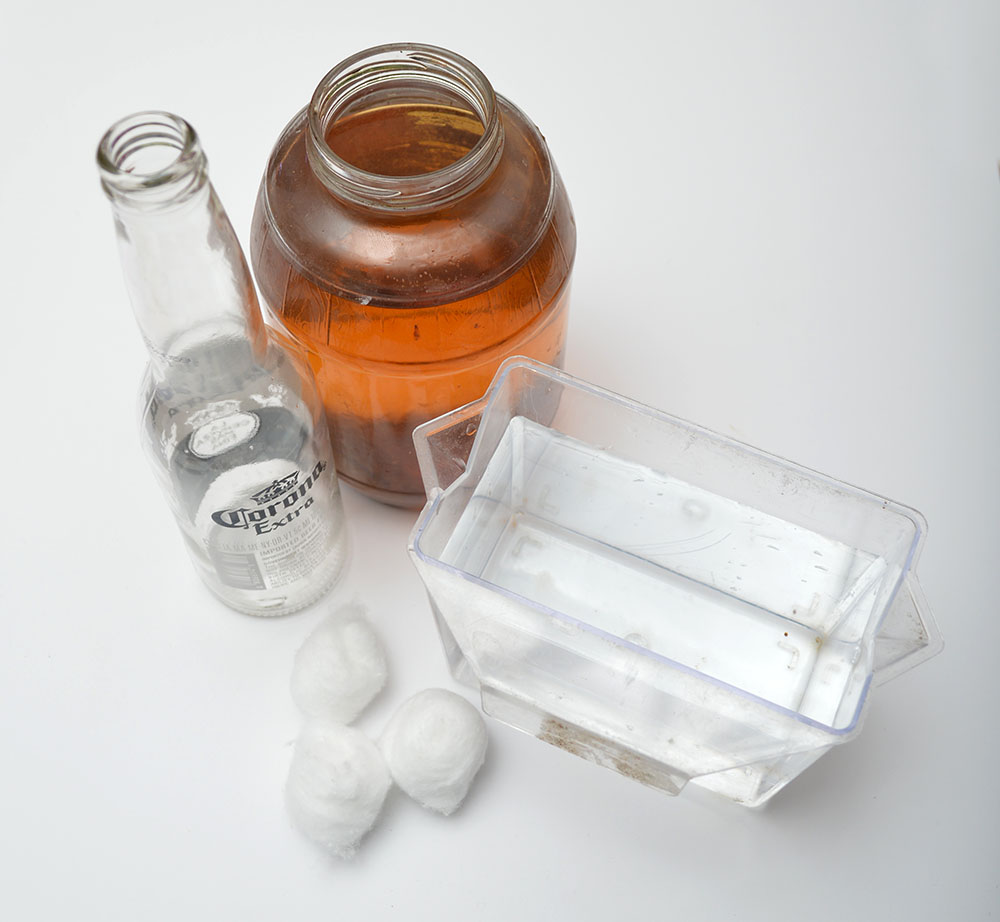 Materials needed to prep a culture for harvest include a beer bottle (preferably one like this Corona bottle), freshwater (I use RO/DI water), cotton balls, and your established culture. Not pictured – a pipette for harvesting. 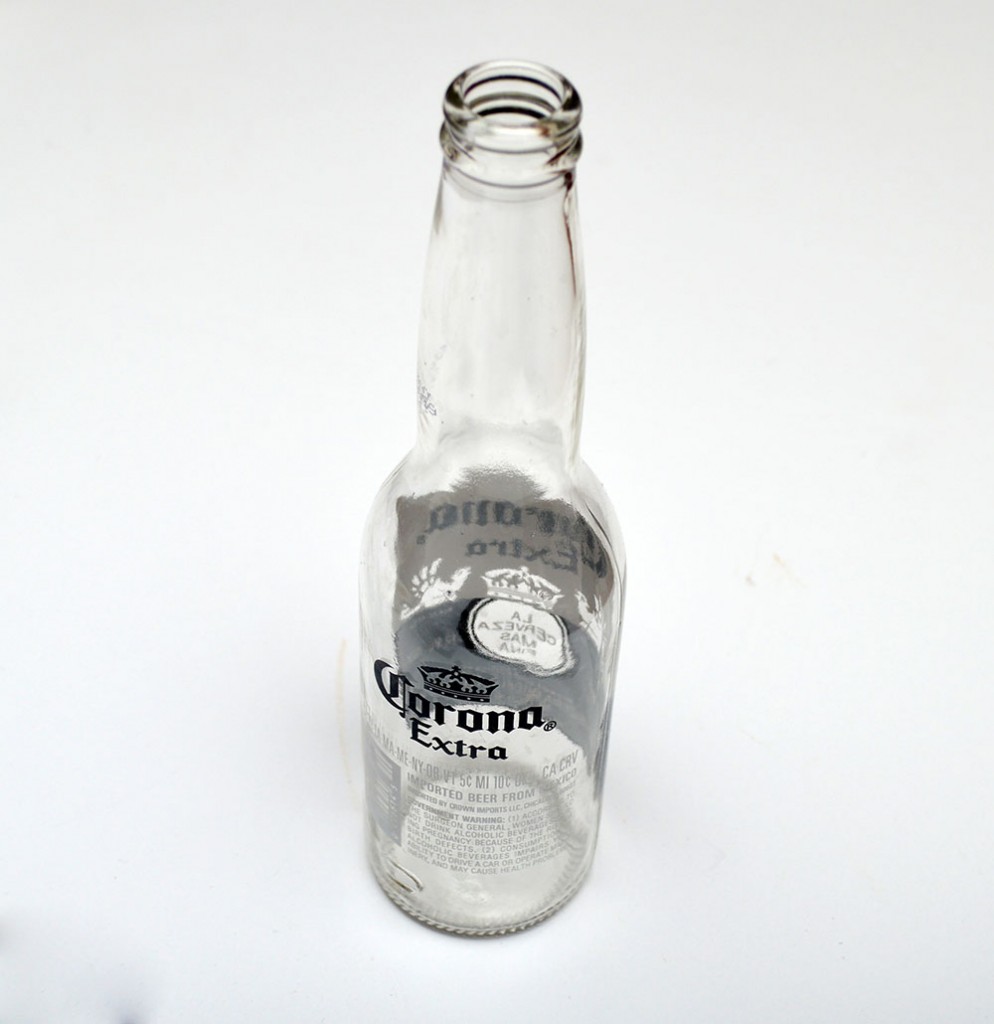 1. Start with the empty beer bottle. 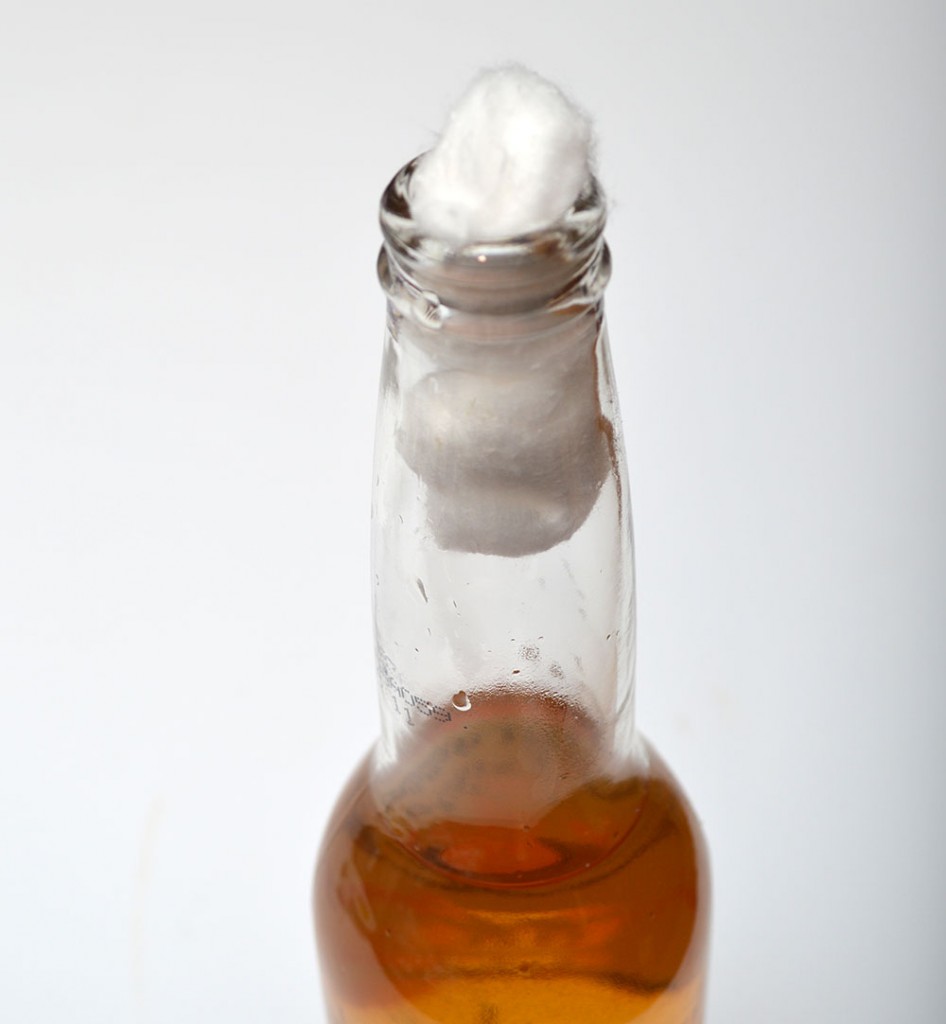 2. Fill the bottle to the neck.
3. Add cotton balls to neck and push down until they hit the surface of the vinegar and expand. 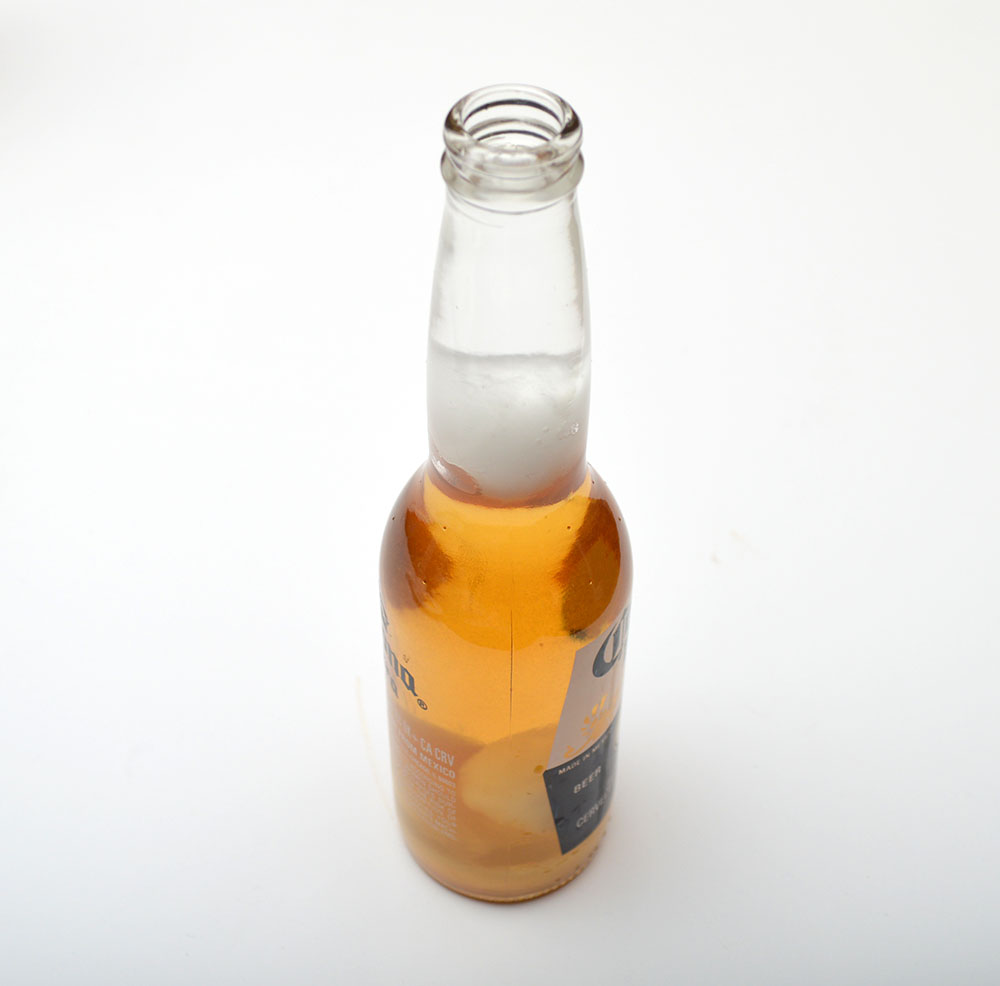 3. Pour fresh water in slowly on top of the cotton ball. Wait 24 hours.

Refill your existing culture with new apple cider vinegar and put it back. Wait for the eels to travel up into the freshwater section of your harvesting vessel. 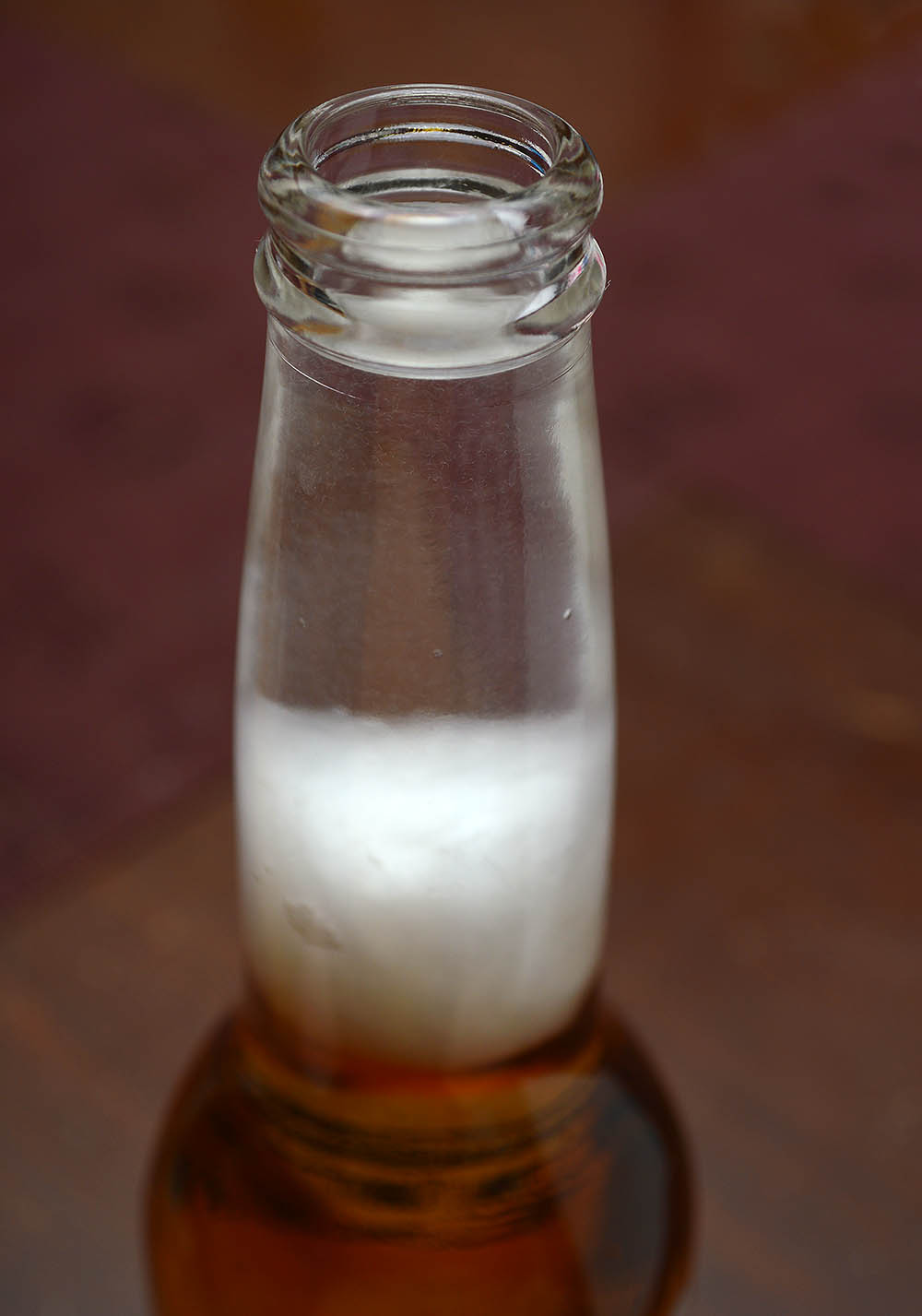 4. A day later, the freshwater layer is filled with vinegar eels. The water and eels can be removed with a pipette.

Once the vinegar eels are separated from the vinegar, you can simply use a small pipette to harvest them, depositing them in a plastic cup and feeding them around the fishroom as needed. I’ve found that I can usually add new fresh water above the cotton balls and get more vinegar eels the next day. I’ve harvested as long as a week, but obviously this quickly hits a point of diminishing returns.

As I mentioned before, this is probably one of the easiest live foods you can culture. They are so undemanding that you can simply keep cultures around, tucked away, for whenever you may need access to a very small live food. If you’re into fish breeding, it probably won’t hurt to keep a couple cultures going.