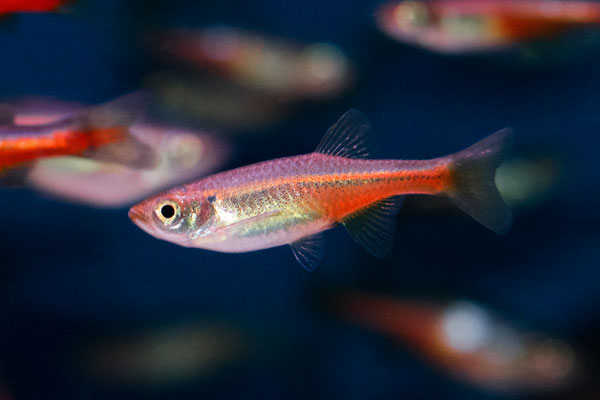 Devario sondhii, the Fireline Danio, from shallow waters in Myanmar, are now coming into the aquarium trade. Image: The Wet Spot.

We are normally quite happy when politics and world events do not intrude into the peace and sanctity of our aquariums, but occasionally the repercussions of international change and diplomatic affairs are very good, indeed. Such was the case when we opened The Wet Spot’s most recent newsletter to encounter a new fish, one that appears to possess rare “must-have” appeal.

Devario sondhii, the Fireline Danio, is one of the species new to the aquarium trade that is starting to flourish in the wake of Myanmar’s government reforms and the restoration of trade with the world outside of Burma. First described decades ago, D. sondhii (Hora & Mukerji, 1934) is reported to be a typical Danio, hardy and a greedy eater. 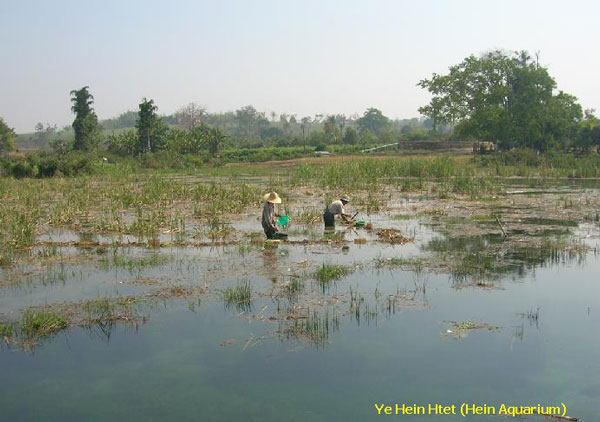 Distinguishing Freckle
The Fireline Danio brings with it an interesting note in reference to an anatomical feature not found in all fishes: This species is distinguished from similar Danios and Rasboras from the same region by a small black blotch known as a cleithral spot near the lateral line, just behind the gill cover. (According to Dr. Ronald Shimek, Reef to Rainforest Senior Editor: “It is a name for the color/skin pattern feature, given to the dark spot because it is positioned over the internal skeletal feature, the cleithrum.  If one knows fish skeletal features, the cleithrum is a fairly prominent bone in the pectoral girdle, so saying the spot is a “cleithral spot” actually tells some pertinent details about the color pattern.”)

Fishbase lists the maximum length of Devario sondhii as 6.5 cm SL (2.55 inches). The fish was originally known as Danio sondhii, or in some references as Brachydanio sondhii, until assigned to the genus Devario by Kullander in 2001.) 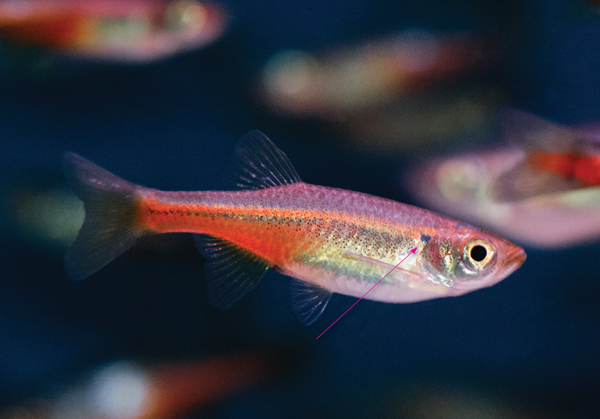 Note arrow to cleithral spot, a dark freckle behind the gill cover on each flank near the lateral line.

Chelsea Walery of The Wet Spot in Portland, Oregon, says wild-caught imports of the Fireline Danio are “generally in stock.” This fish is best housed in shoals of six or more, at minimum; keeping 10 to 12 is recommended to bring out natural social behaviors. To bring out the best coloration, offering several meals a week of color-enhancing flakes or small pellets is advised as part of a varied diet.

“The best tankmates for Danios include bottom-dwellers such as Loaches and Corydoras,” according to the Wet Spot. “These fish are a great addition to a community tank enjoying water quality in the normal Danio range. They add a certain ‘spunk’ that is a joy to watch without requiring additional care.