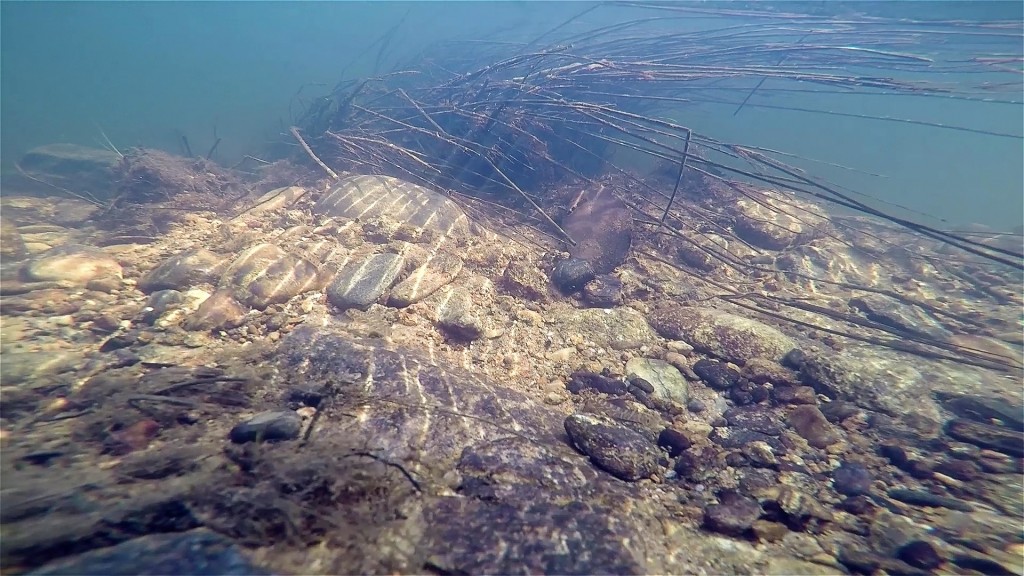 The trailer I posted this spring about my trip to India sparked a lot of curiosity and interest. When planning the trip, I was in constant contact with the friends with whom I would go on the trip. Many thanks to Beta Mahatvaraj, Jibran Shariff, Krishna Raju, Rahul, Abhilash Paramesh, and Deepak Sathyanarayan; without them this trip wouldn’t have been possible. They laid out a fantastic collection trip plan.

All the planning was done and I was in India at my parents’ place on March 2nd, 2015. I left for Bangalore on March 5th in the evening. The trip was three days long. Since Jibran lives in Mysore, we planned to meet there. I reached Bangalore and took a bus from Bangalore to Mysore and stayed overnight at Jibran’s place. In the morning we picked up Beta from the Mysore railway station and Abhilash from his house. Once all ready, we started our journey. We were starting from Mysore and planned to go to Mangalore in this trip. 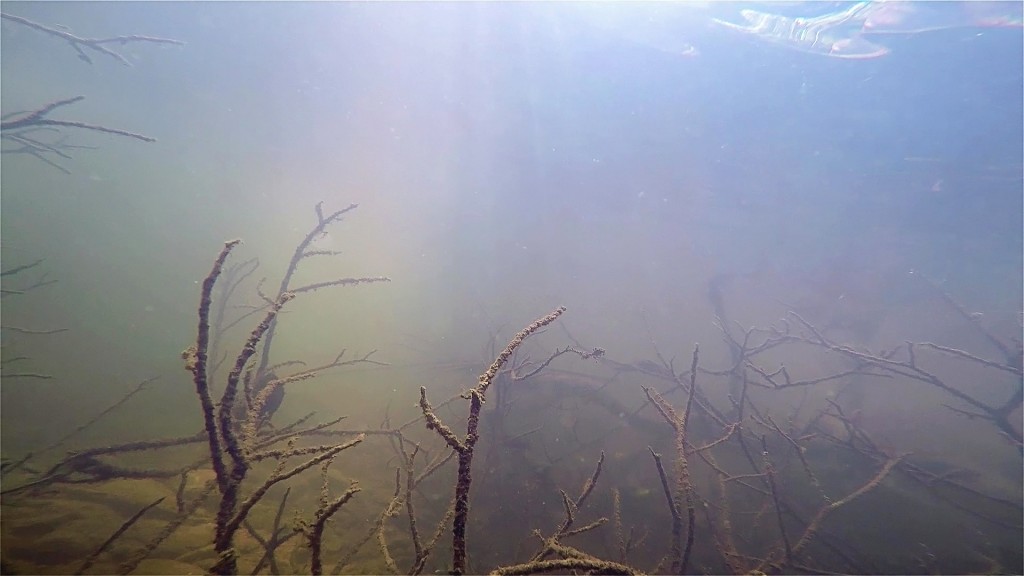 Trees that come downstream during a flood create very dramatic aquascapes in the streams.

It was a great experience for me as a fishkeeper. Since I knew I could not bring any live stock back with me to the U.S., I was more keen on photographing and videotaping them. Usually, when on fish collection trips, hobbyists tend to collect the fish, put them in photography tanks, and photograph them. I wanted to photograph the fishes in their natural habitat. I also wanted to see how the natural biotopes are being damaged and polluted. 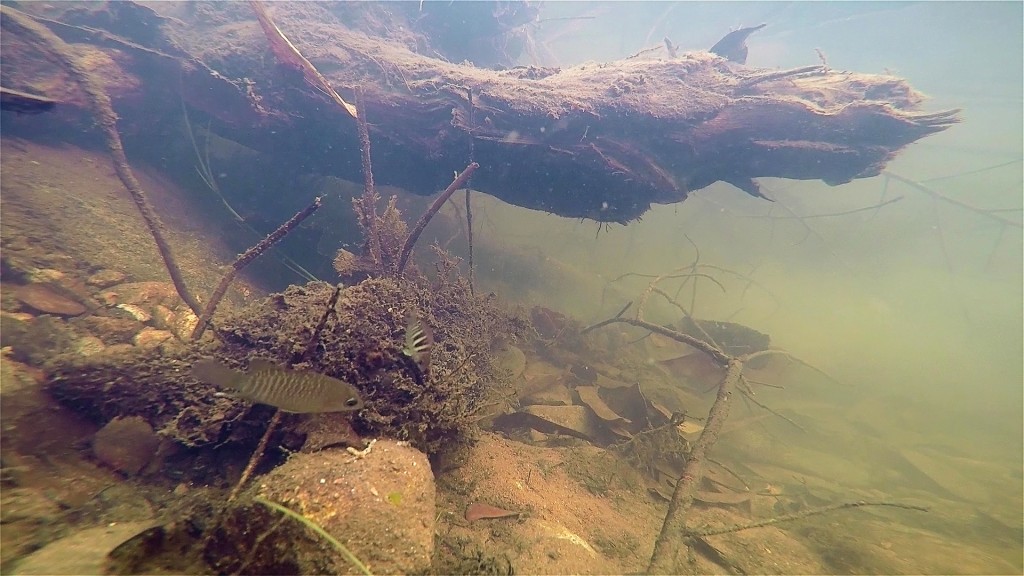 Dead tree logs and branches serve as a refuge for the fry and juveniles. Seen here are an Etroplus canarensis juvenile and a Pristolepis marginata juvenile.

On our first stop, near Coorg, we were near a bridge by the Kumaradhara river system. Here I got to see Mesonoemacheilus triangularis, Nemacheilus stigmofasciatus, a lot of Barilius canarensis, Garra mullya, pea puffer Carinotetraodon imitator, some juveniles and a beautiful caring pair of Etroplus canarensis, Dawkinsia assimilis, and last but not least, Pristolepis marginata.

This place was relatively undisturbed. Since there was no open bank for the people to come down to, the general population had little interest. Except a few kids swimming in the river, we did not see any other activities like washing clothes, etc. There were some signs of sand mining, and pools were formed where the sand was mined. 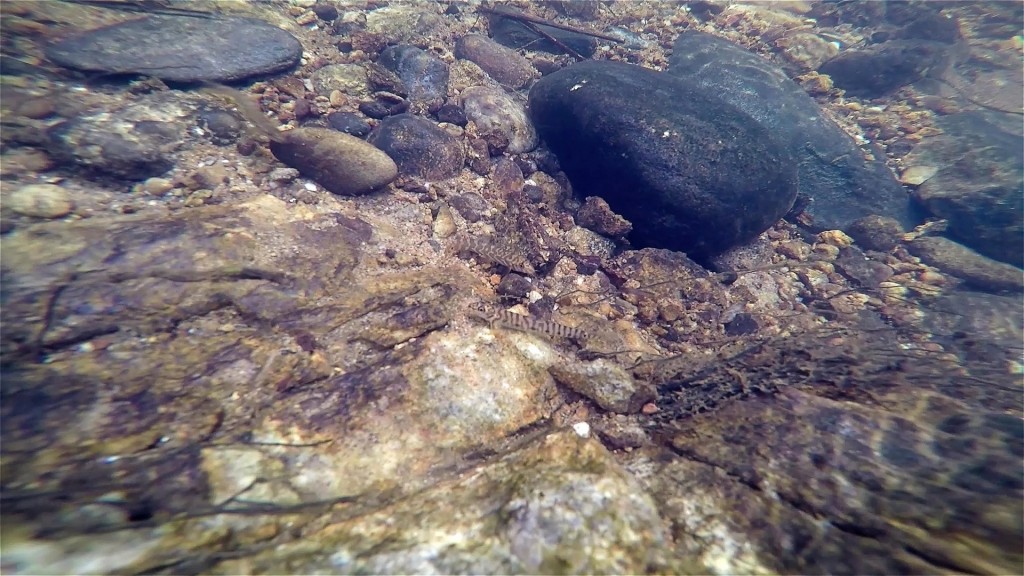 The water was clear, cold, and fast-flowing. Mesonoemacheilus triangularis and Nemacheilus stigmofasciatus, seen in this picture, were really enjoying the fast flow of the water.

The water was flowing fast with a few dead spots. It was three to four feet deep. The bottom was nothing but gravel and rounded pebbles covered with epilithic algae. There were pieces of wood here and there, but plants were absent. When I started looking for the activities underwater, the very first fish I saw was Mesonoemacheilus triangularis, a loach with a very interesting pattern on its body. The loaches were hopping from one rock to the other in fast-flowing water. They were very well camouflaged, and it was hard to notice a fish until it moved. A few minutes later, a Nemacheilus stigmofasciatus joined the party. The difference was visible. Nemacheilus stigmofasciatus has more of a slender body than Mesonoemacheilus triangularis. It also has a series of elongated dots on the side of the body.

Moving a little upstream, I saw some pea puffers (Carinotetraodon imitator) buzzing around. Their small pectoral fins work so fast that they swim through fast water very easily. Their fin speed would make an excellent research topic. I followed a specimen with my camera. Since it was such a small fish, it can be a little hard to spot it in my wide-angled video.

Then I moved towards the opposite bank of the river. I found a pool which looked like a result of sand mining. It was cut from the stream, and as a result, the width of the stream had shortened. This might not sound like a big deal, but it actually is. This created a bottleneck for the stream. The water, which used to go through a wider area, is now flowing through a bottleneck. By the virtue of this, the flow has increased greatly in this smaller area. The depth of the water has also increased. This would directly affect the light penetrating to the bottom, which would then cause the depletion of the epilithic algae growth, which is the main source of food for many fish species that occur in this body of water. Minute changes like this in the ecosystem can cause major issues.

Stay tuned to see what happened next.