Fresh off the excitement of my first glimpse of aquarium fish in the wild outside Villavicencio, Colombia, I decided to take a last-minute detour away from Bogota and into the heart of Amazonas. My destination: Leticia, the extreme Southeast corner of the Colombia and a 700-mile flight from Bogota. It is an area remote enough that it is linked only by air and river travel, and is one of the country’s hotspots for aquarium fish collection, with a number of common species being regularly collected for export there. A short time after catching a first glimpse of the Amazon itself through the clouds as the plane made its descent, I had arrived in the steamy, tropical town—a bustling port crowded with motorbikes and boats. 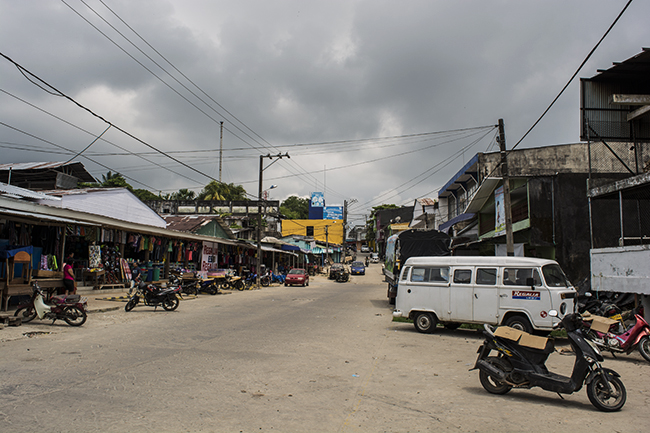 Leticia’s ‘downtown’ and main road, which extends out into the surrounding forest

Due in part to its remoteness and unique geographical location, Leticia is something of a no-man’s-land bordered by the Brazilian town of Tabatinga to the East and Peru on the opposite side of the Amazon. The locals call it Tres Fronteras—three borders—and one can walk or boat between the three countries without passports or border checkpoints of any kind in a throwback to the wild Amazonia of the past. Here, the commonalities of life along the river take precedence over whatever nationality one happens to be born into, and locals move freely from one country to the next with some regularity. Like the region’s human population, the fish that make their way from Leticia and to Bogota for export are also a bit of a melting pot, with collection regularly occurring in both Brazilian and Peruvian territories.

Handpainted map of the ‘tres fronteras’ with Colombia upper left, Brazil to the right, and Peru on the lower left

My first destination was outside town, in the indigenous community of Tacana, where I would spend the next few days visiting aquarium fishing spots and hoping to somehow make contact with people involved in the collection and transport of fish in the area. Situated between the Amazon and the Rio Tacana, this area is checkered with quiet blackwater quebradas (streams) and canos (creeks), which are home to an incredible abundance of aquarium species. With the help of a local guide, my wife and I spent the first afternoon collecting fish on foot and by canoe in the Tacana area. Even with just basic hand nets we were able to collect a broad assortment of common aquarium species—including silver and marble hatchets, apistogrammas, splash tetras, pencilfish, and an assortment of other characins. 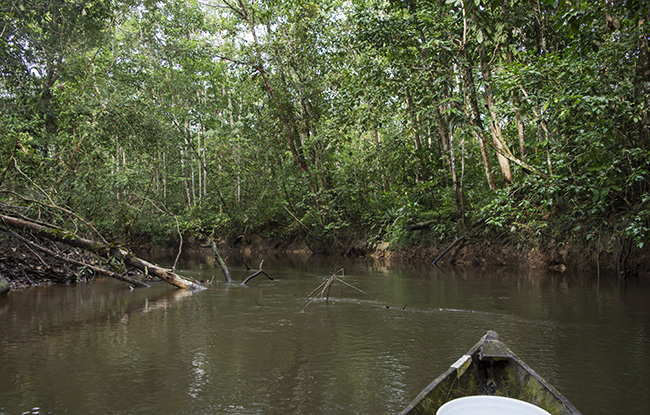 Exploring a creek off the Rio Tacana by canoe 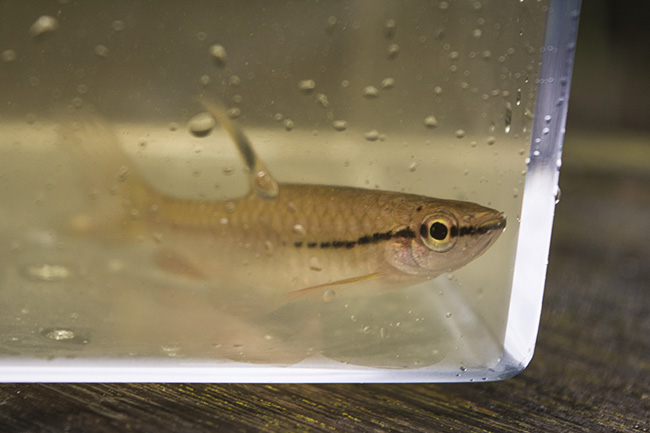 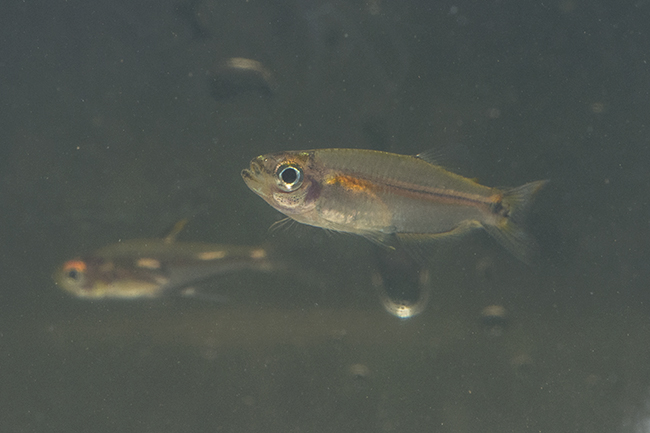 An interesting unidentified characin also found in the Tacana

After a short hike, we continued into an area inhabited by several families of Macuna Indians, from whom we obtained permission to collect fish (after some initial confusion over the fact that I would be simply collecting, photographing, and returning the fish to their habitat—not bringing them with me to eat later). In these larger streams and still water ponds we found an abundance of headstanders (Chilodus punctatus) and hundreds of silver prochilodus (Semaprochilodus sp.), which I was a bit surprised to see in such still water. A bit later, in a shallow, very clear blackwater creek running through a clearing, we also encountered a huge variety of species, including common farlowellas, bristlenose plecos, dozens of Laetacara pairs guarding fry, large Crenicichla, and wolf fish (Hoplias sp.). Among the thousands of juvenile Laetacara in this creek, there were also a number of baby eartheaters, Satanoperca leucosticta, although no adults were spotted. 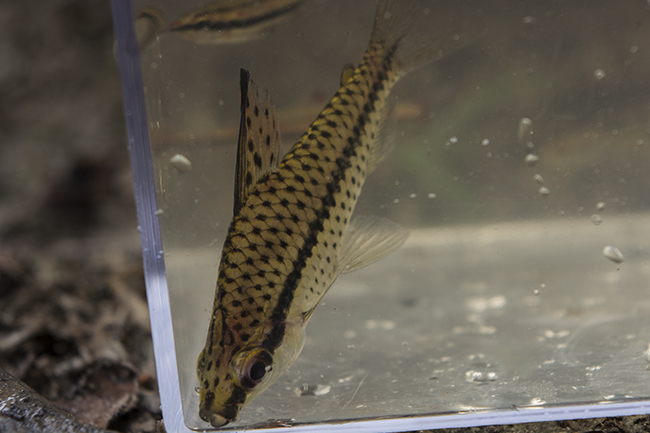 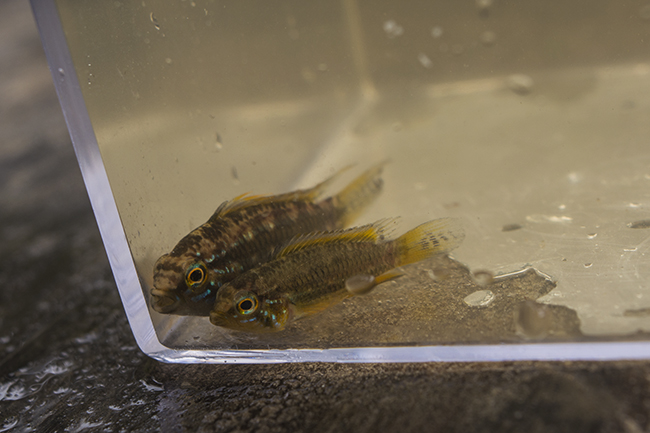 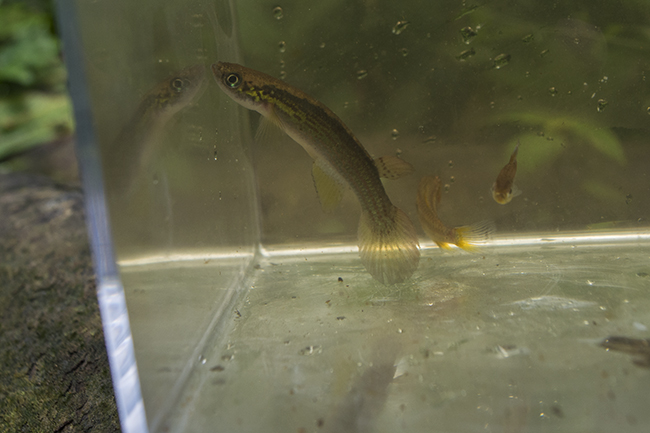 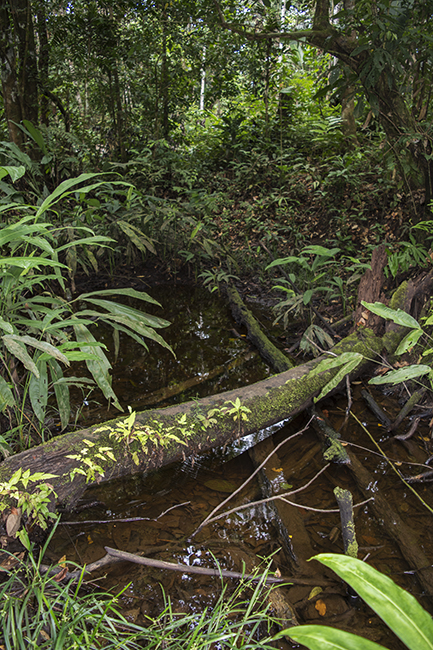 All throughout our explorations of the areas surrounding Leticia, I inquired of any locals we came across about aquarium fish collection, asking if any pescadores de peces ornamentales or piabeiros were in the area. Not unexpectedly, I was told repeatedly that few, if any, lived in the area and that most full-time collectors lived and worked further outside the town. Despite the relative abundance of common aquarium species in the Tacana region, fishers only occasionally work in the area, preferring instead to work in more remote areas where high-demand species can be found in huge numbers. No one we spoke to personally knew any aquarium fish collectors currently working in the trade. Therefore, we decided to regroup and visit some of the buyers/consolidators who had floating holding facilities, or balsas, on the river itself the following day, and get a closer look at how Leticia’s ornamental fishery operates. After that, we would be heading out on the Amazon to visit some of the more commonly-utilized collecting areas for the fish that make their way through Leticia and onward to Bogota. 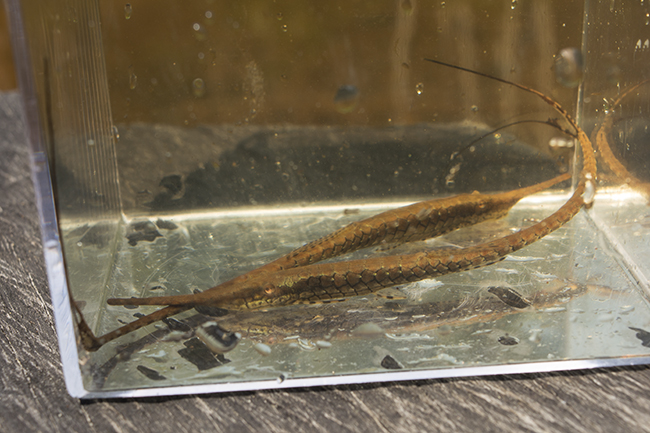 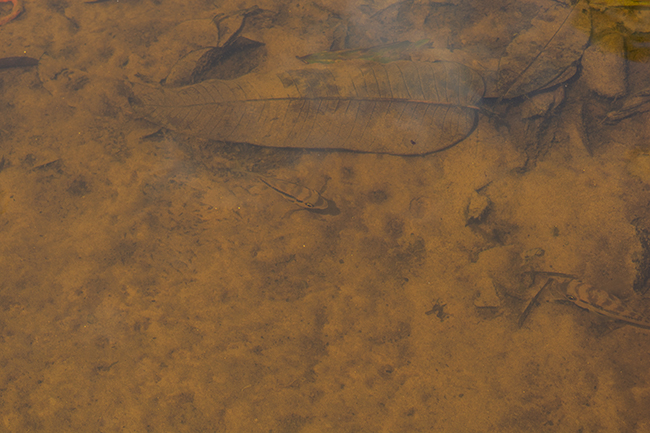 The first day in Leticia was a perfect re-introduction to Amazon life, and while it was an incredible experience to get to collect some stunning aquarium fish in their wild habitat, I was growing anxious about whether I’d be able to make contact with fishers and buyers in the area as I had hoped. It was a reminder of the difficulty in getting to the ground level of any aquarium trade fishery—even in a relatively small consolidation point like Leticia. In most cases, it is a small trade, dwarfed by food fish collecting and generally overlooked by locals, but I hoped to be able to at least observe and talk with some of the people in the area responsible for getting wild fish from the Amazon to our home aquariums—once again, following the fish.