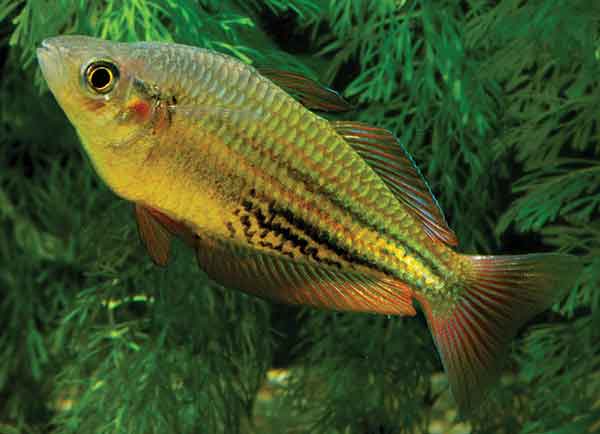 Male Running River Rainbowfish in an aquarium. Wild populations may be lost due to hybridization with an introduced species. Image: Keith Martin.

ANGFA (Australian New Guinea Fishes Association, www.angfa.org.au) has started a crowd funding project to establish a captive breeding population for the Running River Rainbowfish. This is a population of the Burdekin Rainbowfish that is about to disappear due to interbreeding with an introduced rainbowfish which will result in the loss of the wild pure population. With golden to green bodies, bright red fins and distinctive black zig-zag lines on their flanks, aquarists have long recognized the Running River rainbowfish as a distinct population of a unique undescribed species found only in the Burdekin River of northern Queensland.

The funding will be used to conduct genetic testing on wild and pre-existing captive Running River Rainbowfish to examine levels of genetic diversity and ensure only pure fish are included in the captive population. This will ensure that each captive population we establish has a good mix of genes that best represents the original wild population. These captive populations will be provided to large scale breeders to make them more available and secure in the aquarium hobby. Efforts have already been made to establish populations in Europe and they will eventually become available in North America via Johannes Graf to Gary Lange.

More information about this project can be found on the following pages:

At the bottom there is a link to a pdf file which has more detailed info as per this link:

Any donations no matter how small will go a long way to helping. We hope that individual rainbowfish enthusiasts and aquarium clubs will do what they can. The funds website can only take credit cards, but please contact Peter Unmack via email (peter.unmack@canberra.edu.au) if you have trouble donating.