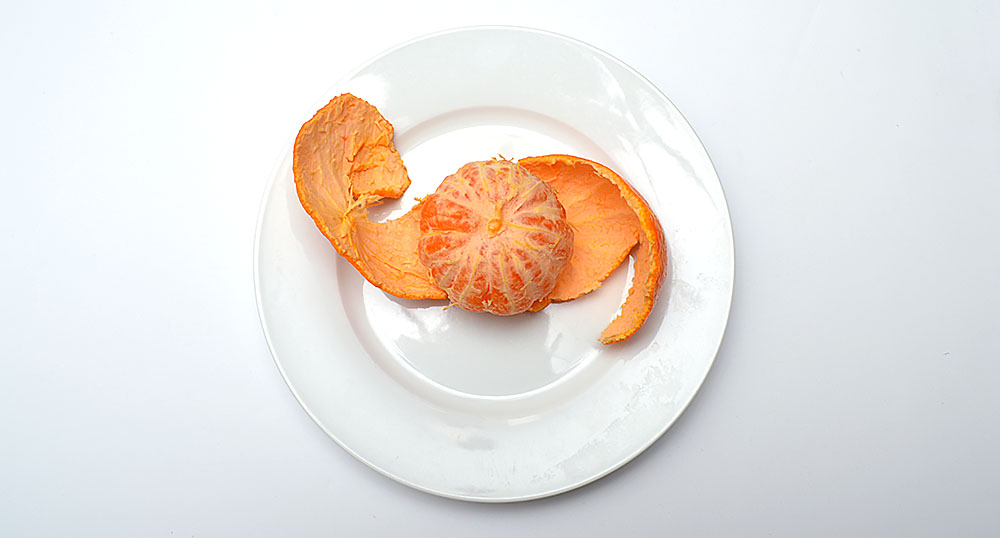 In early April 2016, I was blessed to host two veteran aquarists here in Duluth, MN, who would be speaking at a joint Frag Swap & Speaker Event held 3 hours west on the frozen tundra of Bemidji, MN. James Fatheree, a highly-recognized columnist and author of “the” book on Tridacna clams, and a Florida native, was perhaps being begrudgingly polite about the bitter cold during his stay. Meanwhile, Tyler Albrecht, formerly of the now-closed Dolphin Pet Village in the San Franscisco Bay area and now with APACHE Tech LED, was only slightly more enthusiastic about the bone-chilling weather, which ironically was above freezing for much of our time, signifying the final, true start to spring in the Northland.

At times we found some respite from the arctic conditions in the balmy warmth of my fishroom. On his first night in Minnesota while the snow fell outside, Tyler noted the tank of Malaysian-bred Discus I had been working with. I had hand-picked these fish out of a lot of “assorted Discus” at an area wholesaler a month prior; I lost one to a bloat episode, but with some good care, most had done well. 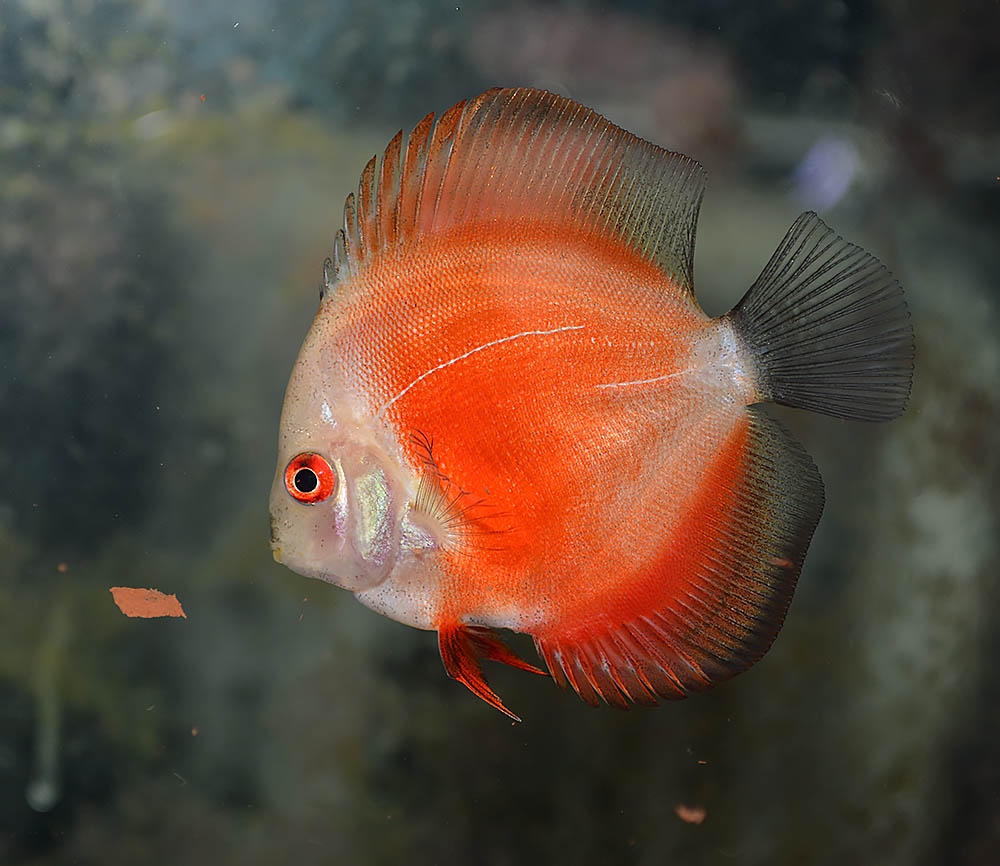 A Red Melon Discus from the group of assorted Malaysian imports; this is fairly representative of the condition of the fish upon arrival.

They’d gone through some TLC and prophylactic treatments and were looking vigorous and ready for sale, but one fish in particular had failed to thrive. Of course, it was the most subordinate of the seven fish in the tank, and was constantly being chased and harassed by its tankmates. Combine that with nearly a month-long refusal to eat, even after having been separated from the rest of the fish since weeks prior, and I had written the fish off as a lost cause. 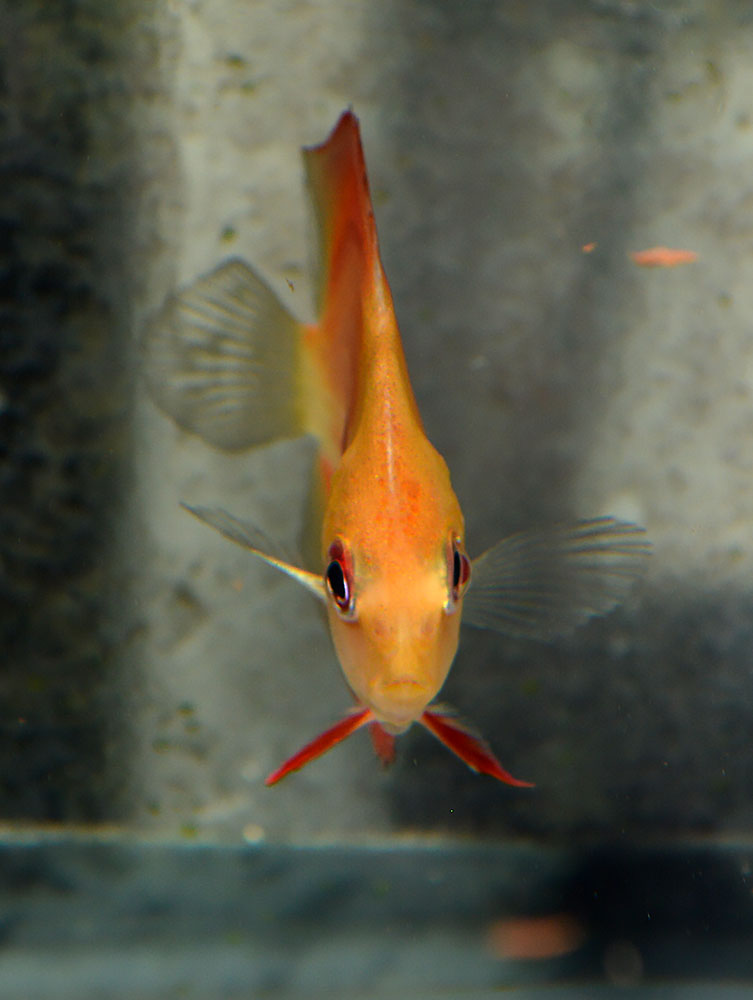 This heavily emaciated Discus hadn’t eaten in weeks; I had completely written it off.

Tyler looked at the fish, turned to me and queried, “Have you tried oranges?” I think my first response was, “Can they even eat that?!”

Tricks Of The Trade

Apparently, over his decades in the aquarium trade, Tyler had accumulated a few tricks up his sleeves. He filled me in. No, in fact he wasn’t suggesting that we try to feed the Discus oranges. Instead, it was the orange peels he was talking about, and not as a food offering at all.

Tyler credits “either Dick Au (a well known San Francisco author and discus breeder), or a transshipper…I can’t remember” with sharing this little bit of fish husbandry voodoo with him [Editor’s update – we’ve confirmed this came from Dick Au]. The trick was to place an orange peel in the aquarium for 24 hours. Each day, remove the old orange peel, and add another. As he explained it, you can do this for up to seven days before you should “give the fish a break.” A few days “off” with some carbon and a water change and you could repeat the “treatment” if needed. But wait, I haven’t even told you what this supposedly does!

For whatever reason, the result of this process, Tyler claims, is an increase in vigor and appetite among the Discus, particularly those that are newly imported. In short, Tyler puts it this way: add the fresh orange peel every day and there will be “more awareness and appetite. No ‘black death’ look to them.”

Now, I’m normally one to discount such an outlandish suggestion as utter nonsense. It’s outwardly on-par with peeing in your tank to cycle it faster. Heck, I’ve even joked that apparently “bananas cure marine ich!”

But, then again, aquarists have know that certain botanicals have positive impacts on their fishkeeping; the oldest one that comes to mind is the use of peat with softwater fish. More recently, I’ve seen first-hand what appears to be the benefits of using Indian Almond (Catappa) leaves. We’ve even seen a brand-new company, Tannin Aquatics, spring up as the latest business from well-respected aquarist Scott Fellman, offering a wide range of botanicals whose purposes could be therapeutic, aesthetic, or both – it’s all about “The Tint.”

This advice to throw orange peels in my tank wasn’t coming from some total stranger either, but an aquarist I’ve known for over a decade who’s a veteran fish breeder–fresh and saltwater–as well. But Tyler upped the ante once again when he claimed that not only had he seen this effect for himself, but that he even performed a small experiment to test it out. Tyler reported trying this with a freshly-imported group of Discus, splitting the fish between two tanks. One tank got orange peels, the other didn’t. He suggested the differences were startling, obvious, and readily apparent.

I figured I had little to lose. I trusted Tyler, so it was time to do something odd. He and I ate a couple clementines and threw the peels in. 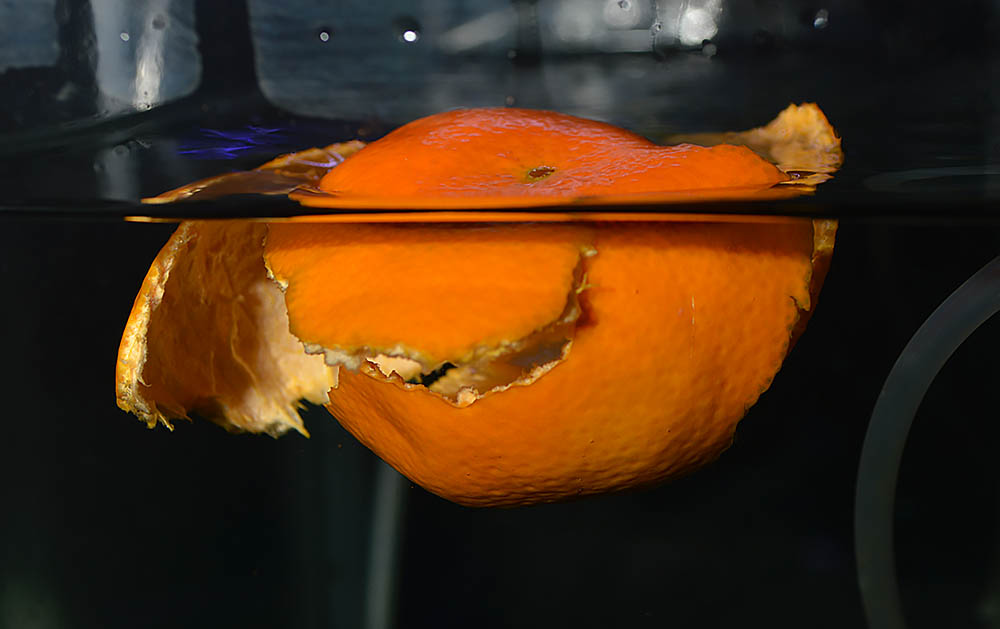 The rind of a clementine now floats in my Discus-holding aquarium.

I did the same the next day, and when I fed the tank, the starving Discus–that hadn’t eaten for a month straight–ate flake food. This timid, dying Discus was out of hiding and swimming around its isolated section of the aquarium.

By the day after Tyler had left, this fish was all over flakes, brine shrimp, and freeze-dried bloodworms, while showing signs of interest in other foods as well. And to think I had been “this close” to euthanizing the fish. 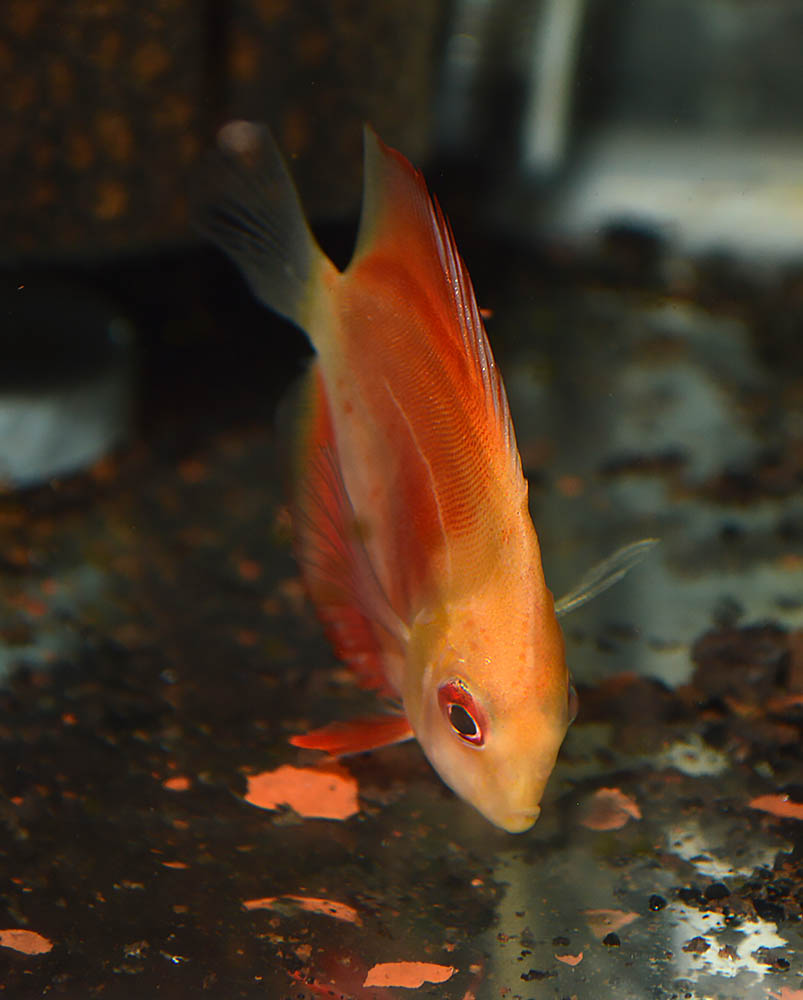 A change of heart — this fish now wants to live.

To be fair, the other fish in the system also seemed to have a little more pep. I was truly surprised. It’s not as if I did ten other things at the same time to try to “fix” this one fish; in fact, they were rather neglected while we ran all over northern Minnesota. The only thing I changed was to add orange peels to my tank. I cannot deny what I just saw happen.

But, thanks to some great scientifically-oriented aquarium friends of mine, I know there’s not much merit here yet. This is purely a one-off anecdote. Perhaps I just happened to start throwing orange peels in the tank on the same day this fish just decided to start eating (correlation does not imply causation). There’s been no formalized study, no proper experimental process, no controls, no replicates. Just a couple veteran aquarists throwing orange peels in their tanks because someone once said it did something.

Perhaps the most interesting part is when I stopped the orange peels for a week, sure the fish still ate, but not like it had before. It’s still far too soon to say, but for a fish I expected to be dead two or three weeks ago, I’m shocked it’s held on this long. Frankly, I still think it’s a goner, but it’s certainly fighting to stay alive now.

Is There Any Science to This?

Frankly, I don’t know. I think this is an interesting enough experience that someone ought to try some formalized experiments to see what happens. I of course worry, in sharing a crazy tale like this (and knowing I’m two weeks late to say this was an elaborate April Fool’s prank), that six months from now we’ll all be dosing our tanks with orange peel extracts sold as some over-hyped product with a slick name that someone cooked up in their garage.

I did go off looking for some answers, if the Internet had any to offer. I found some interesting discussions about people actually feeding their fishes all manners of fruit, including oranges and orange peels, but no one specifically talking about the peels as some sort of beneficial additive.

I found more interesting ideas when searching for things like orange peel extracts, orange oils, and orange peel stimulants. Still nothing very scientific came up in my results, although it does seem that the homeopathic and herbal medicine interests groups have no shortage of uses for extracts and oils from sweet oranges (there’s a whole second thing out there called “bitter orange” that seems even more prevalent). Indeed, one of the “side-effects” seemed to be a stimulant-type response to using these sweet orange extracts and oils.

But there may in fact be something to all this. There is some support in scientific literature to at least suggest that certain extracts of orange peels may have anti-inflammatory properties. An even more interesting paper mentions improved food consumption and appetite response in the larvae of Egyptian Cotton Leafworms when an orange extract is added as a phagostimulant (feeding stimulant) in offered diets.

Of course, *maybe* Cotton Leafworms just like the taste of oranges. Of course, perhaps Discus do, too.