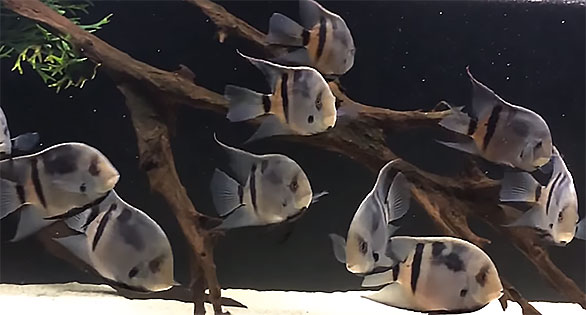 In the days of growing income disparity in the U.S., I have to chuckle about the names we used to use for fish. Consider the “Poor Man’s Moorish Idol,” the name applied to the marine butterflyfish Heniochus acuminatus. I guess if you didn’t have the cash on hand to throw away on purchasing the much more difficult to care for, but similar looking Moorish Idol, Zanclus cornutus, you, the apparent “poor man,” could at least resign yourself to knowing that Mother Nature had a cheap knockoff waiting for you in the Heniochus.

It seems that we’ve kind of gotten away from calling things the rather derogatory “Poor Man’s” this and “Poor Man’s” that; perhaps we don’t want to be reminded that these days, many more of us might qualify as the “poor man” or “poor woman,” as the case may be. Still, suggestions of “who could afford what” weren’t limited to marine fishes; I remember growing up as an aquarist reading about the Uaru, Uaru amphiacanthoides, sometimes thought of as the “Poor Man’s Discus.”  The reasoning was that, back in the day, this cichlid–while rather drab, even in my generous opinion–had some behavioral similarities with the Discus (Symphosydon spp.). Discus were expensive, but if you met the challenge you could have cute little baby Uaru feeding off the slime coat of their more affordable parents, just like Discus fry do.

Before I continue, check out some of these great videos highlighting the Uaru, perhaps giving you reason to reconsider our “Poor Man’s” labeling.

Uarus with Geophagus altifrons and other species – Videos by Thomas Jetter

Uaru with Manacapuru Blue Discus and what appears to be Geophagus sp. “Tapajos” – video by Holle Honig

It’s tough to keep every fish you might want, but maybe I’ll consider spending some time with the Uaru in the near future. Having seen it show up at an area wholesaler, and being reminded of the admittedly interesting juvenile appearance, I could say that the common Uaru, now more expensive than some Discus, can finally stand on its own merits and not play second fiddle to the “King of Aquariums.”

Then again, the poor old classic and common Uaru can’t seem to catch a break.

That’s right, I turn my attention away from freshwater fish for a while and when I return, here’s this newer Uaru species that, while every bit as monochromatic and brown/black as the Poor Man’s Discus, seems to scream, “Look at This Sexy Beast” as it glides past the aquascaping, cavorting with conspecifs. The Panda Uaru commands, no, demands your attention. It is the vamp, the beefcake, of the Uaru world when it comes to good looks.

And it has the name “Panda” in front of it. Inadvertently, I think I’ve discovered a fish marketing secret. Panda Loach, Panda Cory, Panda Discus, Panda Guppy, Panda Garra, Panda whatever…slap the word Panda on its trade name and watch demand (and price) soar. Is there a Panda Pleco yet?  No? There should be. There will be. (How many other “Panda” fish are out there? Tell me what I missed in the comments below…)

Panda Uaru currently out-costs many bread and butter marine fish staples; all due respect, but a lifetime of marine fish-keeping has somewhat desensitized me to the sticker price of most fishes, so when I look at a freshwater fish and say “ooo…that’s too rich for my blood right now,” you know we’re talking about a fish that my fellow Minnesotans would politely refer to as “SPENDY“—and then they’d go take a week’s vacation scuba diving in Mexico for less than a dozen Panda Uarus might set me back. Suddenly the good ‘ole Uaru is right back to playing the inexpensive second fiddle to a sibling species.  Indeed, the Poor Man’s Discus, U. amphiacanthoides, is now the Poor Man’s Uaru.

The Poor Man’s Uaru still has one thing going for it: it’s probably a good practice fish to work with before you set your sights on the Panda Uaru. Both of these species reportedly have the same care requirements and sensitivities as Discus, so maybe, we should be calling Discus the Poor Man’s Panda Uaru and finally give both the recognized species in the genus Uaru the respect they deserve.

But for now, please join me in drooling over some great footage of the highly desirable “Rich Man’s Uaru,” Uaru fernandezyepezi!

Panda Uaru tank by dans2727, who notes, “This is my group of 11 Uaru fernandezyepezi, they are between 6″ and 9″ in size. The tank is 1000 liters, water params are Temp 29oC, pH5.6 and TDS 140ppm. Diet consists of Lettuce, Peas, Tetra Prima, Frozen Bloodworm, Earthworms, Seaweed flake among other stuff. About halfway through the video I feed them some Bloodworm, I think they like it. The tank consists of the usual decor, swimming pool filter sand for substrate, Oak branches I have collected from the woods plus a couple of bits from my LFS. A few stones and the Pangea 3D background. I use RO water and rebuild it using TMC Minerals. The filtration is a combination of Kaldness K1 behind the background and an Eheim Pro 3 External Filter with Ceramic Bio Rings. Turn over is about 5000 lph.”