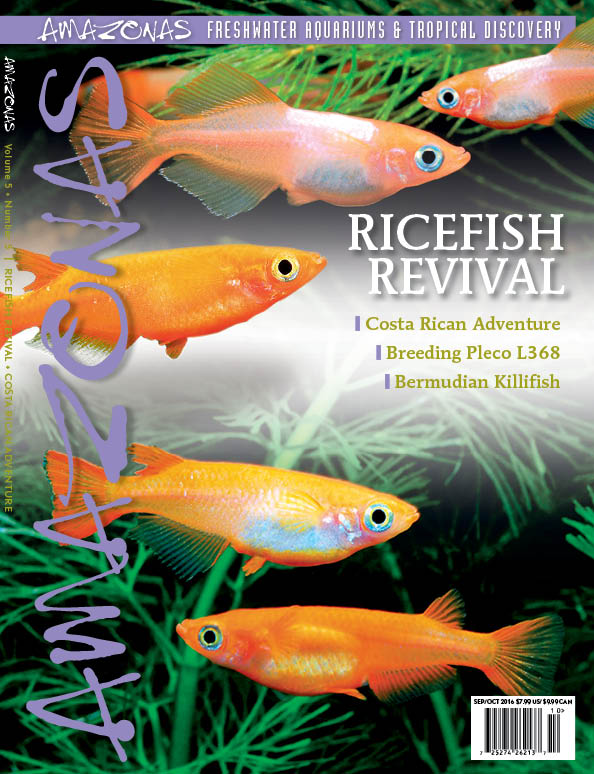 “When Japanese talk about their domestic ricefish, they usually call them Medaka. This name is used for wild and farmed forms alike and can be roughly translated as “with bright eyes,” which refers to the big metallic eyes characateristic of ricefishes. Exactly when these little fish managed to conquer the hearts of the Japanese can no longer be pinpointed. We do know that they, along with Goldfish, were kept by all classes of people in the Edo period (the reign of Tokugawa shoguns from 1603 to 1868).

“Because of their small size they fit quite well in the ceramic vessels that were made at the time, although more stylized pictures from that period show them in ponds. Even today Japanese people commonly keep these fish in ceramic bowls and pots, often with a small pond lily or water lily or the popular Eichhornia crassipes (Water Hyacinth). The fish use the dense root system as spawning medium. In Japan, where living spaces tend to be small, this allows many people to keep a piece of nature at home. Because Medakas chase mosquito larvae of any size, they are welcome in small gardens and on terraces and balconies.”

Fancy Ricefish, Oryzias latipes. Yokihi Medaka is the common Japanese name for all orange varieties; Yang Guifei (Chinese) is often used as an alternative. Deep orange strains were being developed by Yukio Ooba as early as 2004. This normal-finned strain is distributed as “Y-30.” Photo: F. Mori

Look to the next issue of AMAZONAS for more about the magical Medaka, which is making a serious comeback with glorious new color forms from a new generation of Asian breeders.

• INTO THE JUNGLE: Planted tank enthusiast Steve Waldron heads into the Costa Rican forests, net in hand, wife keeping an eye out for vipers, in search of adventure and interesting fishes

• BREEDING MILESTONE – L368: Success with the rare, beautiful and still unidentified Scobinancistrus Pleco known as L368.  A must-read for all would-be home breeders.

• PLUS: Cryptoheros altoflavus, Bermudian Killifishes, Hypsopanchax cf. zebra, a report from Tanzania and Michael Tuccindardi’s first-hand observations of the good that comes from wild aquarium fisheries in Latin America.

And more….   The July/August Issue of AMAZONAS will be arriving in homes and stores during the early days of August..

Subscribers can anticipate in-home delivery of print copies around the first of AUGUST, followed by email links to the simultaneous Digital Edition.  Subscribe to AMAZONAS or buy Back Issues here.