When it comes to collecting feral populations of Poecilia reticulata in North America, West Virginia is not one of the first places that comes to mind. While many Guppy enthusiasts are aware that Florida feral ditch populations started out as commercial farm escapees, few realize that self-sustaining populations exist in thermal spring environments throughout the United States. Conditions in each of these thermal locations can be rather harsh for a species evolved in a tropical setting. Overall, size of habitable range is normally limited by temperature extremes, predation, and water chemistry.

Most of these sites have reliable sources suggesting initial dates of introduction ranging from the late 1940’s-1960’s. In general, it is believed that populations derive from aquarium-based stocks and not wild-caught individuals. Based on this knowledge, it is safe to assume that foundation stocks consisted of Wild-type, Short-tails, Swordtails, and early Veil tails bred in aquariums. 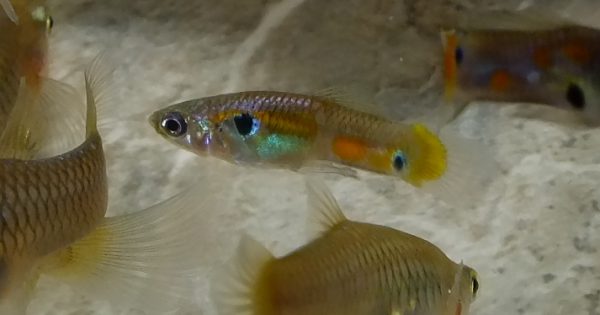 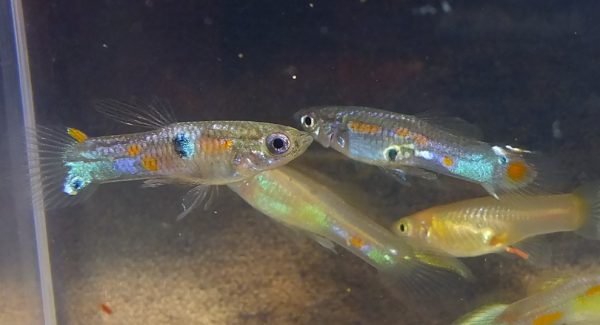 In some locations, habitation is limited to pools near thermal discharge at the spring’s source, or just below, when water is cooled to maximum survivable temperatures. In others, habitation will extend downstream to a point where minimum survivable temperature are no longer maintained during winter extremes. Fish that disperse or are born below this point will perish in the winter.

Just as temperature restricts these feral populations, so does predation. In some sites, predation consists of local native species of fish, birds and insects, while in others it may include a host of introduced South American, Central American, and African Cichlids. Often, various species of Mollies, Platys, and Gambusia can also be found. The presence of Gambusia in itself will greatly restrict Guppy population levels.

Many thermal springs have one thing in common: extremes in chemical composition of output water. Water there is often very hard with high pH levels, including high concentrations of minerals not typically found in South and Central American waters. While introduced Guppy populations survive, they may do so under great duress.

A few states that come to mind that have thriving thermal populations of Guppies are Nevada, Wyoming, Montana, Idaho, Texas, Connecticut, Colorado, Wisconsin, and West Virginia. Yes, West Virginia has a thriving population of feral Guppies at Berkeley Springs State Park in Morgan County. For further location info and photos, check out: http://www.berkeleyspringssp.com/ or http://berkeleysprings.com/history-berkeley-springs/.

Berkeley Springs is typical of many cold or hot springs found in West Virginia. It is considered a “Silica-rock” spring system. Instead of being fed by an underground aquifer, surface water percolates through Oriskany Sandstone formations before returning to the surface. Unlike many thermal springs arising in decomposed granite or limestone country, those fed through silica contain very low levels of dissolved solids. Yet Berkeley Springs water is very highly mineralized.

The exact heat source for Berkeley Springs has never been completely identified. Water exits the spring at a temperature of 74.3*F. Compared to most geothermal springs, this is rather “lukewarm.” An average of 1200 gallons per minute flows from the spring year-round, and varies with seasonal discharge estimates as high as 2000 gallons per minute. Water leaving the spring stream flows immediately into Warm Spring Run. The year-round feral Guppy population is limited to this short section of spring stream. Warm Spring Run in turn flows into the Potomac River after a journey of about six miles.

The best estimates for the establishment of the Berkeley Springs feral Guppy population set the date just after World War II, in the mid 1940’s, based on early observations by park staff and visitors. This is quite a bit earlier than documented thermal spring stockings in Western States. However, it does not rule out subsequent introductions.While the presence of Guppies at an earlier date is feasible, populations would have been destroyed or decimated by a series of catastrophic floods between 1936-9, which inundated the spring and spring stream. A flood control project initiated between 1955-61 has eliminated much seasonal flooding of the spring stream inhabited by Guppies. However, periodic flooding of the park and spring stream still occurs. No doubt this drastically reduces Guppy populations. 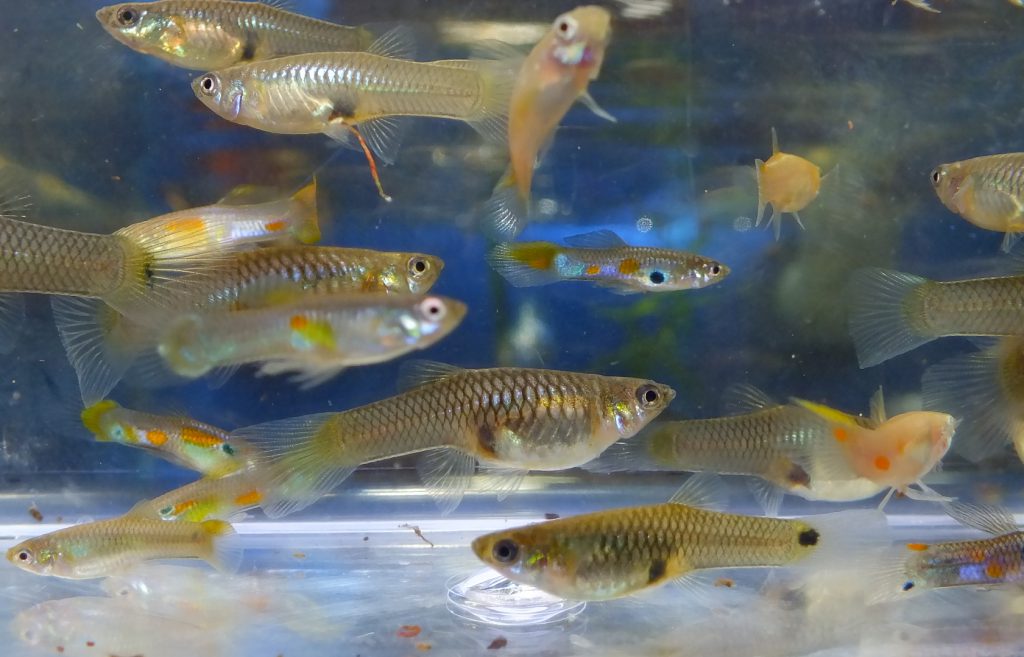 Because it is a “warm water” stream, and based on migration studies by researchers, it is feasible that Guppies could travel downstream into Warm Spring Run, either by natural dispersal or during the aforementioned warm weather flooding. Numbers would be small and heavily preyed-upon. As you exit the spring stream and move downstream, predation by native species would increase. Some commonly-found predators would include Stonefly, Caddisfly, Water Beetles, Crayfish, Sunfish, Bass, Catfish, Pickerel, Shiners, Suckers, and Bullhead Catfish. With the return of cold weather, dispersed individuals would perish.

Today, the springs and discharge stream barely resemble those of the past. The stream is heavily channelized with rock retaining walls, paved walking trails, and small bridges. Water depth is rather consistent, with seasonal flow, within the streambed itself. Most variation is in the form of deeper pools that form underneath bridges.

As with other thermal stockings, assumptions can be made based on the time of stocking. Founding members of the Berkeley Springs Guppy population would have likely been of wild-type, swordtail, and possible early veil tail available in the 1940’s. Guppies are found the entire length of the spring stream in great numbers. Some variation in both body type and age structure can be found in the upper and lower portions of the stream, and in deeper pools. Younger fish and fry are commonly found hiding in plant growth along the stream bank; middle-aged fish are in the length of the stream; and older fish reside in deeper pools. 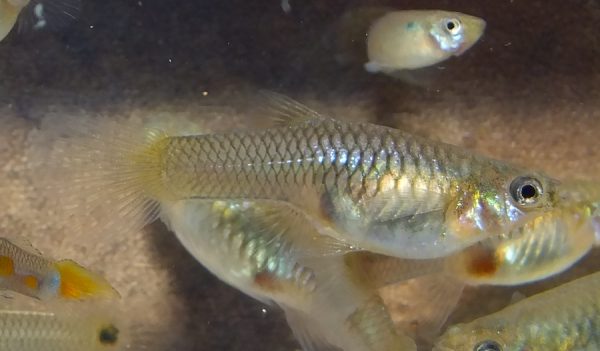 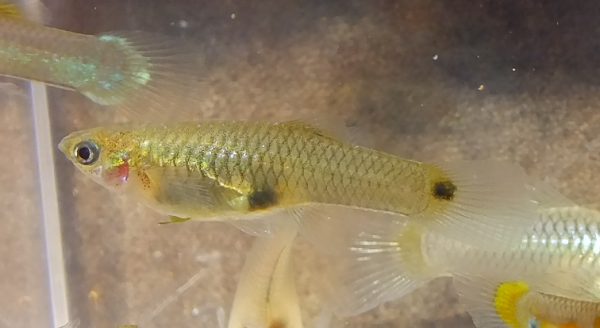 As a result of high flow rate of the spring stream, both sexes are much longer and more streamlined than would be expected in a “typical” feral population. While predominantly wild-type grey body, a portion of the population is blond (b). Initial observations of collected fish suggest that predation has an effect on overall age, and therefore size, of blond specimens as compared to grey-bodied fish. 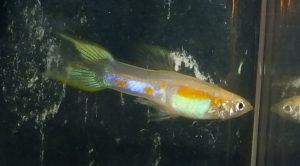 Both sexes can express Metal Gold (Mg) in heterozygous and homozygous states. As in many wild or feral Guppy populations, Purple Body Mutation (Pb) is prevalent. Expression of yellow in finnage and body from Pauper (Pa)/Cinnamomeus (Ci) traits is also common. The latter is not commonly found in modern domestic or feral populations, and is thus indicative of an early stocking date. 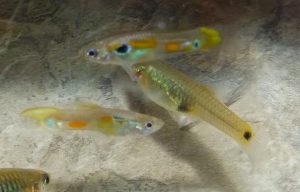 Overall, reflective qualities of the population are not what I would describe as “vibrant.” Still, iridescence is found in many males, for example in this highly reflective reticulata male, who clearly exhibits a “reflective dorsal spot.” This is another marker for potential verification of a very early stocking date. For further reading on the origins of iridescence in modern Domestic Guppies, check out: http://www.pr.bioflux.com.ro/docs/2013.22-39.pdf. 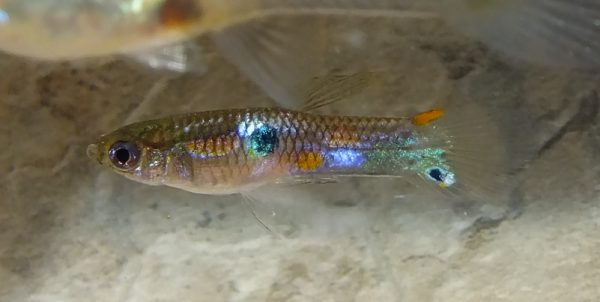 As Guppies are a non-endemic species, collection of them at Berkeley Springs is not discouraged. In fact, children wading with nets are not only a common sight, but also count as one of the top predators. (Get there early in the morning if you are a serious collector.) As a result of all the human traffic, this population exhibits a very high “fright or flight” response to movement from above, and will readily jump out of the water. Therefore, covered tanks and/or reduced water levels are recommended.

On a final note, I would like to mention that this population also appears to suffer from a higher level of parasitic worm infestation than most, possibly as a result of duress from less-than-optimal environmental conditions or maximum summer population levels. While I have not yet put any under the microscope, be prepared to cull your collection when you arrive home and medicate those retained accordingly.

It should be noted that several other introduced species have been reported at Berkeley Springs, to include Plecostomus and Zebra Danio.

Many thanks to my friend and fellow collector/breeder Tom Coggins (Missouri) for this recent collection. Tom arrived at Berkeley Springs Park at 5:30 a.m. after leaving New Jersey at 2:00 a.m. to collect for me, and arrived at my Southern West Virgina home around 2:00 p.m. with a bucketfull to select from. Tom will be collecting feral Guppies this summer from both McCauley and Rogers Springs, Nevada. It will be interesting to see his results.

NOTE: All photos by author.