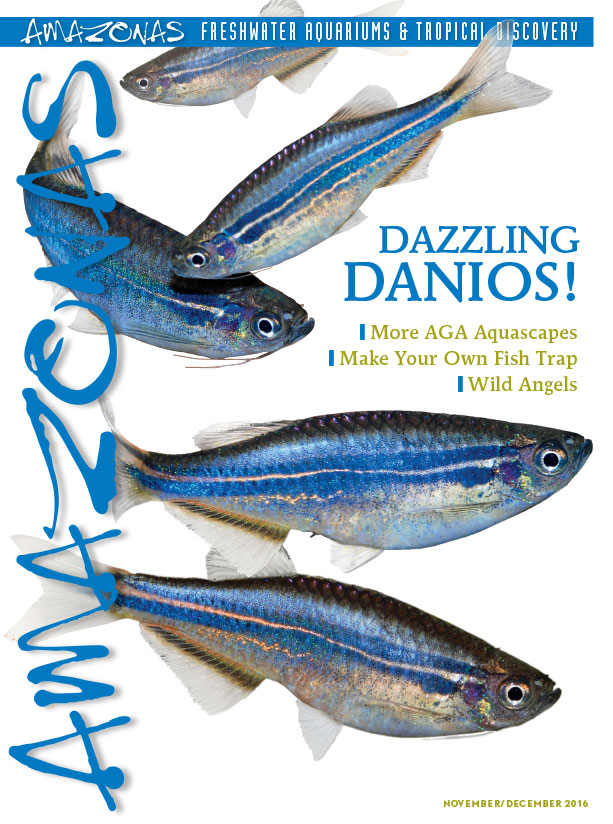 It’s in the mail: cover of AMAZONAS Magazine, Volume 5, Number 6. On the cover: Danio sp. “Hikari.” Images by Hans-Georg Evers.

The November/December 2016 Issue of AMAZONAS Magazine is printed and now on its way to print magazine subscribers, local aquarium shops, and better bookstores.

Readers of the Digital Edition can log in now: AMAZONAS DIGITAL EDITION
Paid subscribers can log in with their email addresses for instant access. The AMAZONAS digital version is available for desktop and laptop computers and tablets. 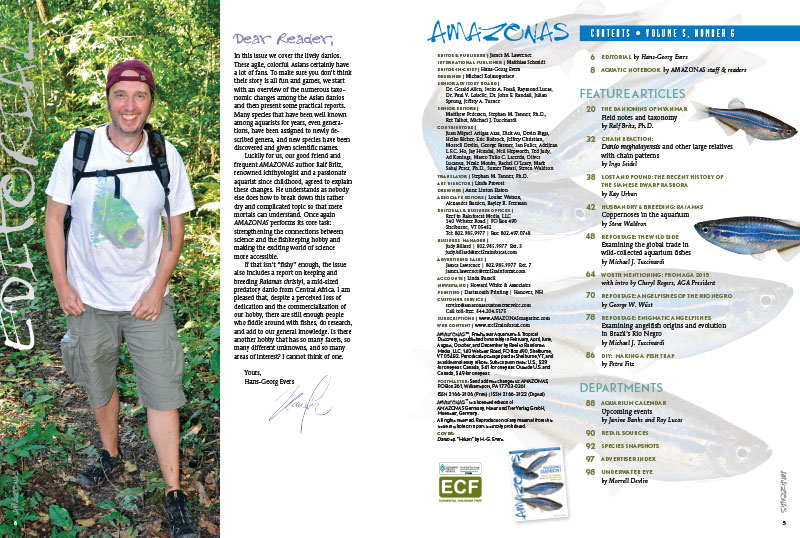 Hans-Georg Evers introduces the issue, discussing the intersection of the scientific community with the aquarium hobby. “I am pleased that, despite a perceived loss of dedication and the commercialization of our hobby, there are still enough people who fiddle around with fishes, do research, and add to our general knowledge. Is there another hobby that has so many facets, so many different unknowns, and so many areas of interest? I cannot think of one.” 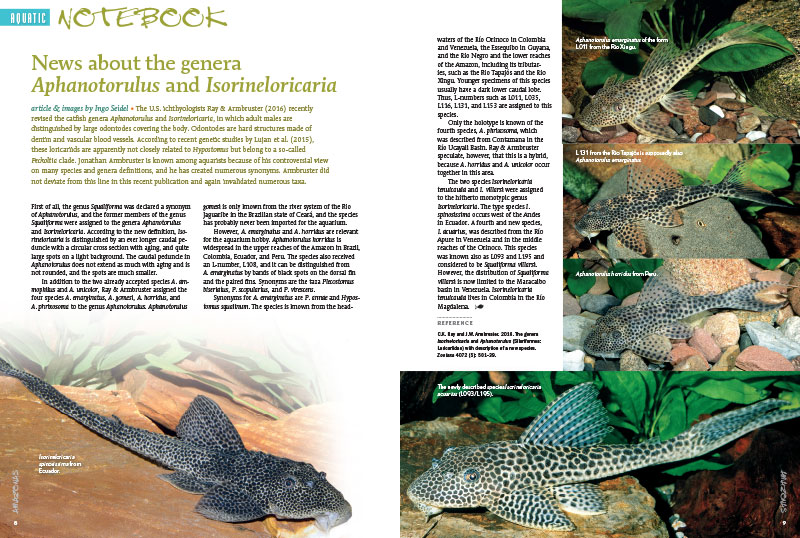 Ingo Seidel kicks off our Aquatic Notebook with “News about the genera Aphanotorulus and Isorineloricaria.” Also in the notebook, two new Hypancistrus species, new rainbowfishes, and Corydoras eversi. 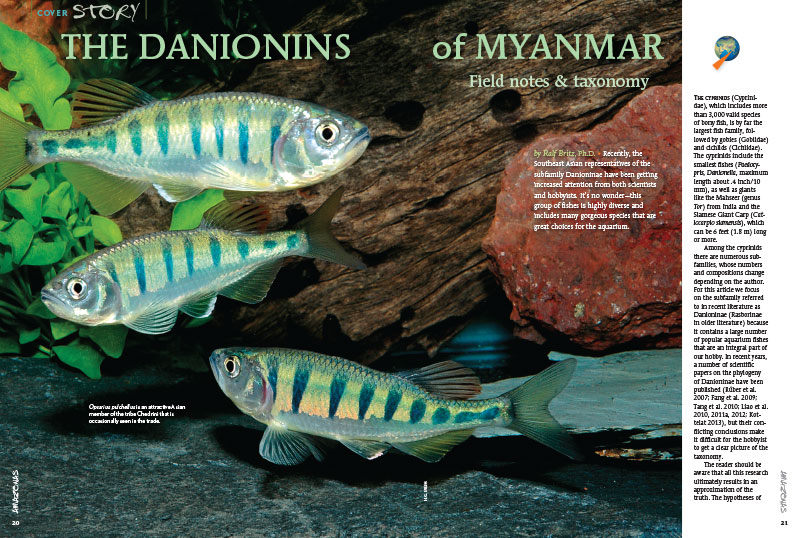 Ralf Britz, Ph.D., introduces us to “The Danionins of Myanmar.” 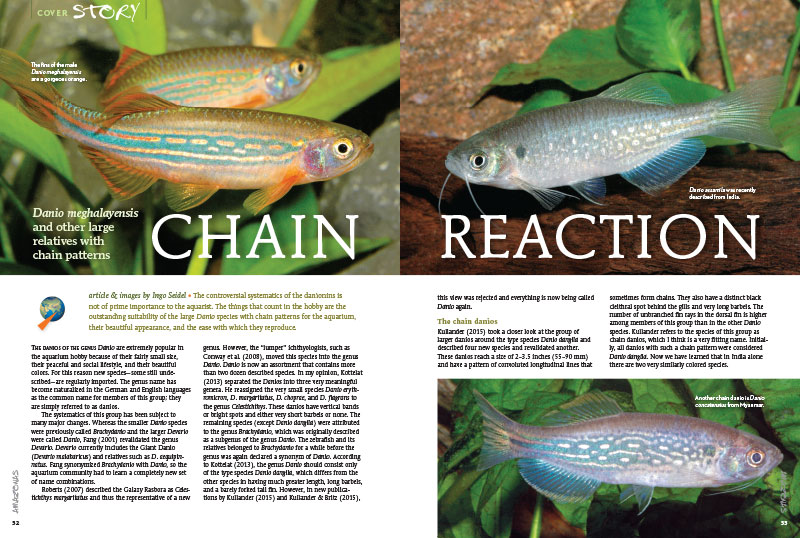 Investigate Danio meghalayensis and other large relatives with chain patterns in “Chain Reaction” by Ingo Seidel. 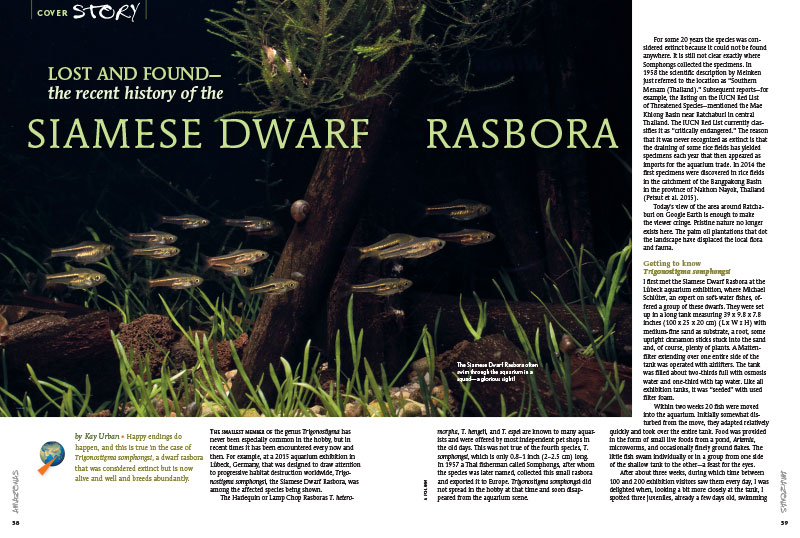 “Happy endings do happen, and this is true in the case of Trigonostigma somphongsi, a dwarf rasbora that was considered extinct but is now alive and well and breeds abundantly.” Learn more about the Siamese Dwarf Rasbora in this article by Kay Urban. 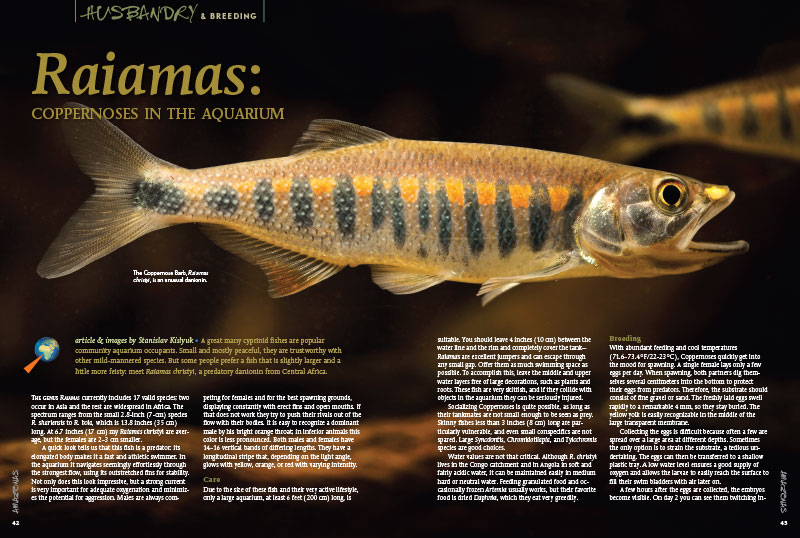 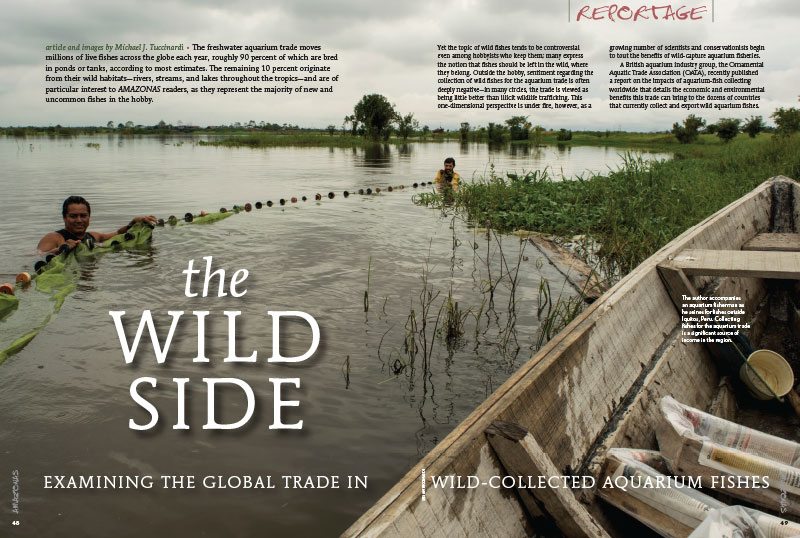 “The Wild Side,” by Michael J. Tuccinardi, examines the global trade in wild-collected aquarium fishes. 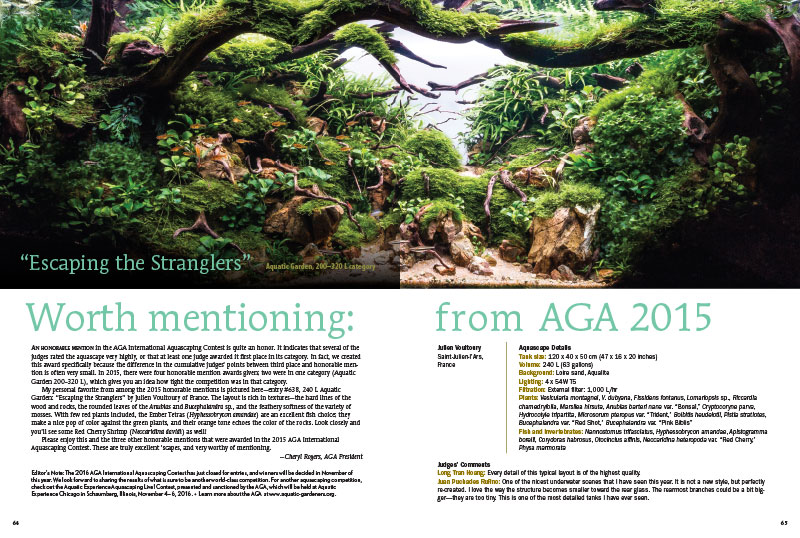 “An honorable mention in the AGA International Aquascaping Contest is quite an honor. It indicates that several of the judges rated the aquascape very highly, or that at least one judge awarded it first place in its category,” writes AGA President Cheryl Rogers. Check out last year’s honorees as we look forward to another year of tough competition in the AGA International Aquascaping Contest. 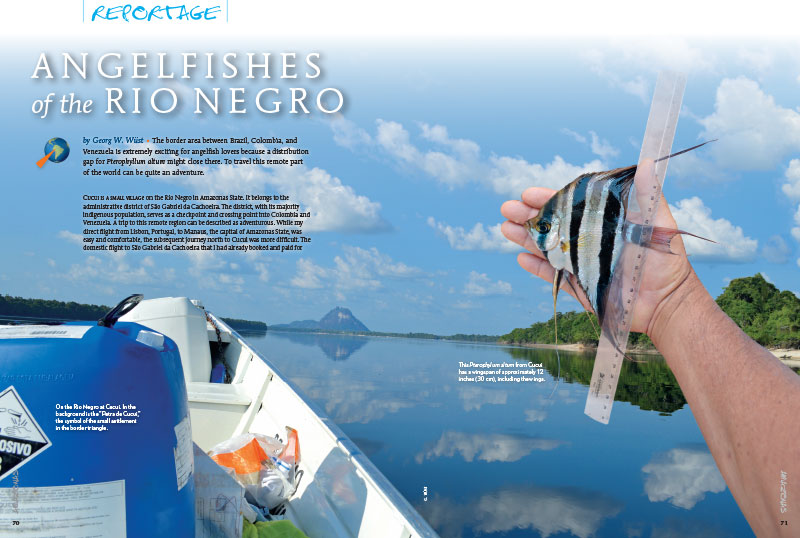 “The border area between Brazil, Colombia, and Venezuela is extremely exciting for angelfish lovers because a distribution gap for Pterophyllum altum might close there,” states author Georg W. Wüst. “To travel this remote part of the world can be quite an adventure.” Go there when you read “Angelfishes of the Rio Negro.” 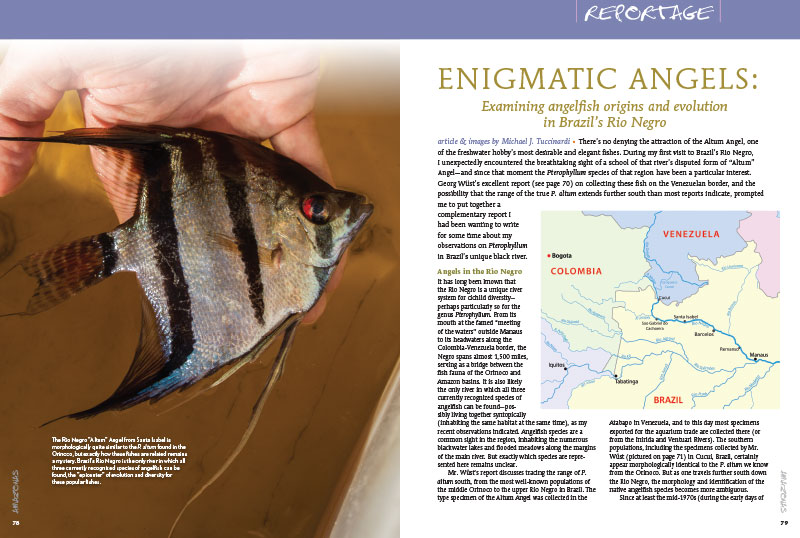 Not to be missed by lovers of Pterophyllum spp.! “ENIGMATIC ANGELS: Examining angelfish origins and evolution in Brazil’s Rio Negro,” by Michael J. Tuccinardi. 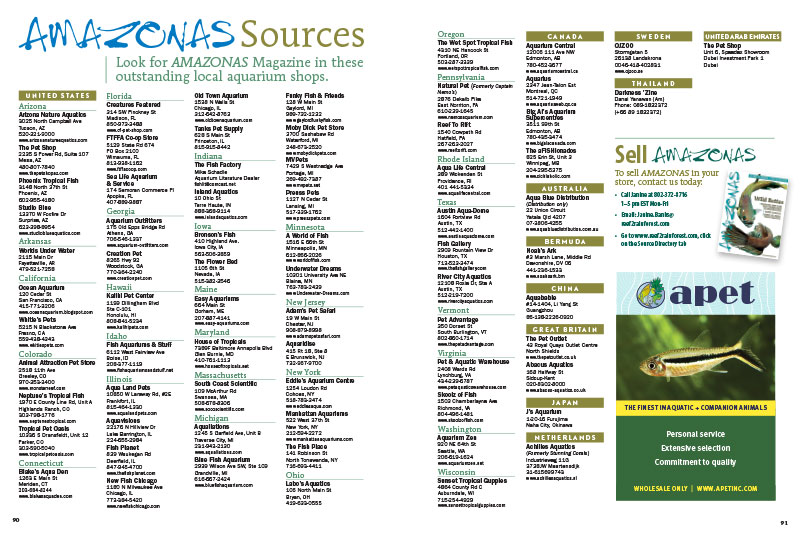 Looking for a single-issue copy? Try one of the many excellent local aquarium shops that carry AMAZONAS Magazine. 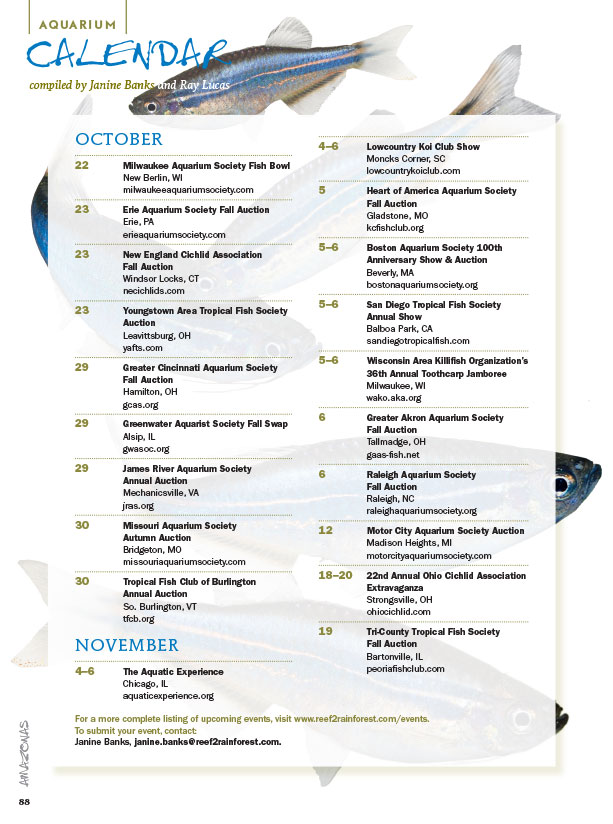 The latest AMAZONAS Magazine Aquarium Events Calendar. Have an aquarium event? Send Janine Banks or Ray Lucas an email to make sure we know about it! 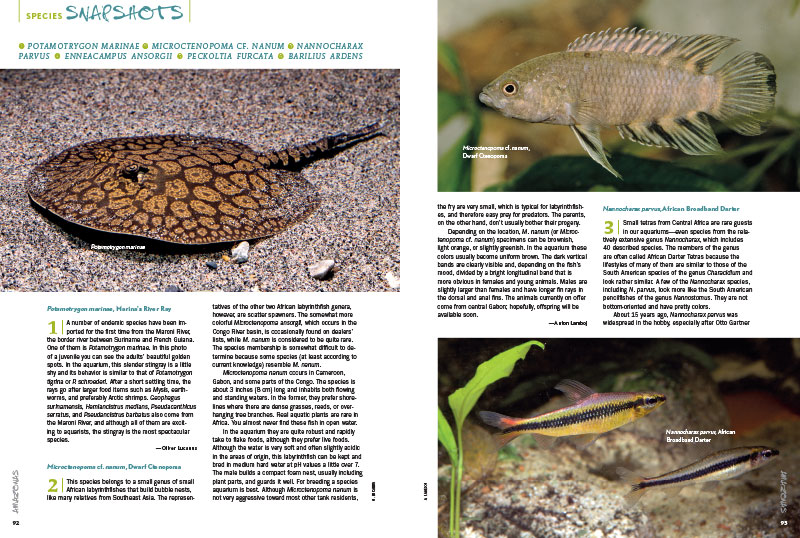 • Already a subscriber? ACCESS the issue now!
AMAZONAS subscribers can log in with their email address and read the Digital Edition and App Editions immediately.

• SUBSCRIBE and never miss an issue of AMAZONAS. Paid subscribers receive the classic Print Edition, as well as Free Access to the Digital Edition and AMAZONAS Apps for mobile devices—via iTunes, Google Play for Android devices, and the Amazon Kindle store.