The Rio Xingu is home to a bewildering array of pleco species, many of which have been in the aquarium hobby for decades now. Despite this fact, the relationships between these species’ complexes are still poorly understood, and relatively few are described scientifically. In a paper published earlier this year, the genetics of several species of Hypancistrus from the region were analyzed to help clarify their relationships to one another. Based on this analysis, the authors concluded that two forms of Hypancistrus well known in the hobby—L066 and L333—are in fact differently marked variants (phenotypes) of the same species. 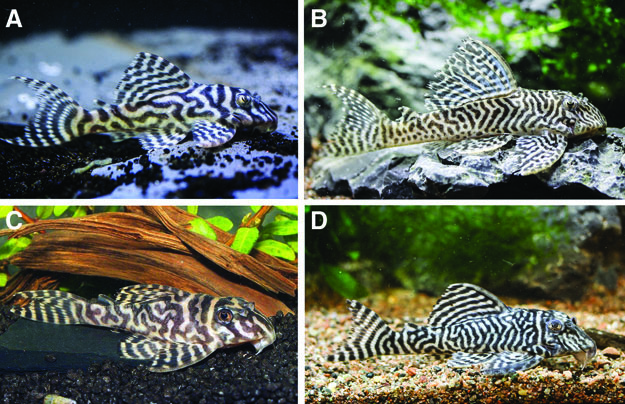 The paper, “Integrated Cytogenetic and Mitochondrial DNA Analyses Indicate That Two Different Phenotypes of Hypancistrus (L066 and L333) Belong to the Same Species,” examines not only the genetic material of these two Hypancistrus but also explores their range in the wild and discusses the inter-relationships between other species in the genus. The two species in question–the King Tiger Pleco, Hypancistrus sp. ‘L066′ and Hypancistrus ‘L333’–have both been hobby favorites for many years, due to their intricate patterns of high-contrast lines in black and off-white. Though they were once frequently collected and exported from their native Brazil, both species are now regularly bred in captivity. Although they are quite similar morphologically, hobbyists have generally considered the two to represent distinct species based on differences in pattern and distribution in the wild. The L066 hails from the lower Xingu and probably the nearby Tocantins river, although there appears to be some geographic variation present between populations. The L333 is found much further up the Xingu, closer to the “Big Bend,” or Volta Grande, near the city of Altamira. As indicated in the paper, however, specimens representing both L066 and L333 were genetically indistinct, and therefore unlikely to represent different species. 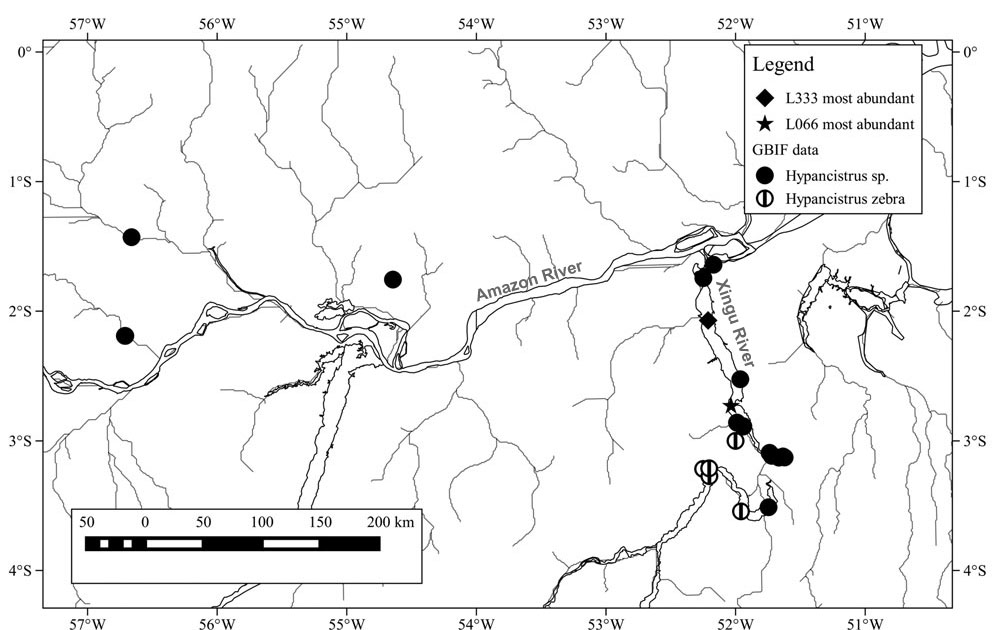 The authors attribute the apparent differences in patterning between the two plecos to “a pigmentation polymorphism within the species that may represent phenotypic plasticity with adaptation and/or selection of local populations to their environment, or environmentally induced changes in the development of melanic pigment patterns.” In simpler terms, this means that the divergent patterns between L066 and L333 could be due to adaptations to differing environments, or triggered during growth and development by different environmental factors. While much of the paper is spent discussing the finer points of genetic analysis and chromosomal similarities between the fish that were analyzed, the findings do have implications for breeding efforts for these two L-numbers, now likely to be formally described as a single species. Hobby breeders have generally tried to avoid hybridizing these two very similar plecos in an attempt to maintain pure lineages, but it now seems possible that crossbreeding the two L-numbers would technically not be hybridization at all. It also raises interesting questions about our tendency to classify fish—and Loricariids in particular—by their markings alone. While doing so can be useful, especially in the case of L-numbers where few species have been investigated scientifically, it is important to remember that our sometimes arbitrary classification schemes don’t always correspond to nature’s.