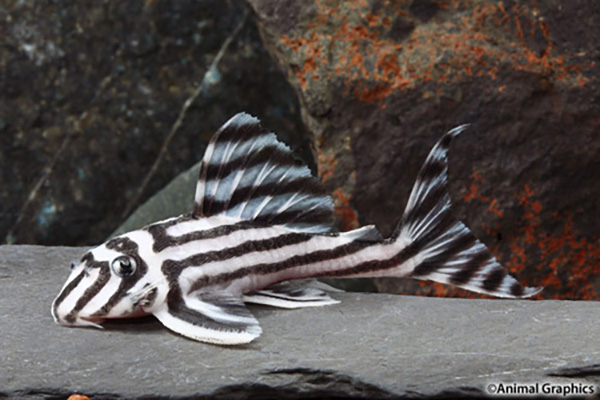 Special Report by Matt Pedersen
with the AMAZONAS Staff

Overlooked in the recent flurry of headlines coming out of Johannesburg, South Africa, as the 2016 CITES Conference announced listing changes for some 500 species of wild plants and animals whose survival is considered threatened or endangered, Brazil has moved quietly to add a popular and charismatic aquarium fish for protection under CITES Appendix III. The historic CITES gathering made world news with new listings of the Thresher Shark, Devil Rays, many Rosewood trees, cheetahs, tigers, and hornbills, while one small fish emerged with a new status but little public fanfare.

Known as the Imperial Zebra Pleco, Hypancistrus zebra, “L46”, the little loricariad catfish is endemic in the Rio Xingu watershed and is coveted by aquarium keepers but feared to be vulnerable to over-collection, although captive breeding efforts are producing an unknown quantity of specimens to meet consumer demands. With supplies limited, the prices of this species have sometimes reached astronomical levels, and a leading online livestock retailer is currently offering captive-bred Zebra or “Altimira Plectostomus” for $299 each.

Unlike other CITES-listed animals and plants, Appendix III species may be named by their country of origin unilaterally without challenge or debate, on the premise that each sovereign nation has a right to protect its own unique biological resources. (Brazil’s late addition to its Appendix III Species posting was listed on October 5 and reported to AMAZONAS by Sven Fosså from Norway.) 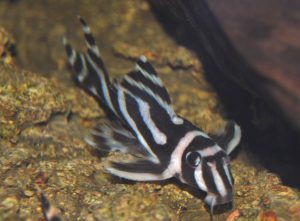 The Zebra Pleco has proved difficult to mass produce, even in the hands of determined commercial breeders. Image by A. Birger, CC BY-SA 3.0

An Appendix III listing mandates that international trade in the species be documented, and establishes paper-trail regulations for exporters and importers that must be adhered to. Appendix III listings do not ban trade, nor do they affect interstate trade within a country. Based on current CITES information, these species will require either an export permit from the listing state (in the case of H. zebra, from Brazil or any country where captive-bred), or if exported (or re-exported) from any other country, a certificate of origin is required. While the commercial trade in Appendix III species remains legal, it becomes more expensive and onerous for importers and exporters.

Per the CITES notification, “In accordance with the provisions of Article XVI, paragraph 2, of the Convention, inclusion of these species in Appendix III shall take effect 90 days after the date of this Notification, i.e. on 3 January 2017.” For further information, visit https://cites.org/eng/disc/how.php

The move to add H. zebra to CITES Appendix III is believed to be primarily an effort by Brazil to curtail ongoing smuggling of wild-collected specimens via neighboring countries.

According to AMAZONAS Editor Michael Tuccinardi, who has been following the trade in South American fishes, “The fish is illegal to collect, transport, and export in its native Brazil. However, with the ongoing ban and the high price this fish commands on the international market, a thriving black market trade has developed. The fish is still collected in the Xingu’s Volta Grande, but now instead of being sent to Belem for export, the fish must cross into neighboring Peru or Colombia, where some exporters are happy to trade in this high-value rarity. 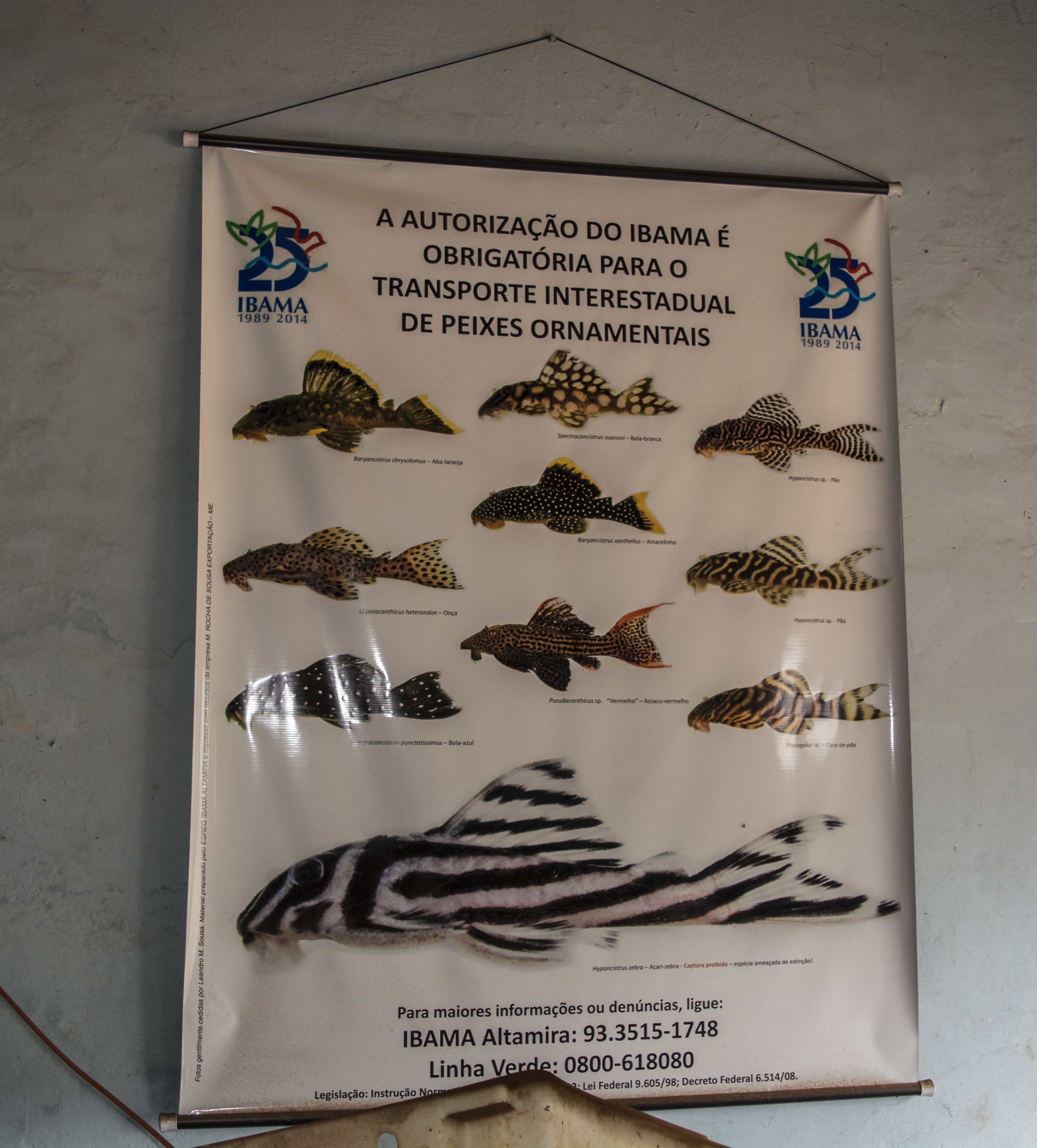 “The governments of both countries have recently come under pressure from Brazil to crack down on this smuggling—and they have, to some extent. Several exporters in Peru were stuck with hundreds of wild L046 that they could no longer export when I visited earlier this year, although many smaller exporters still manage to circumvent the rules. In Colombia, a similar situation exists, with many smaller exporters offering Zebra Plecos, along with an array of other banned Brazilian species. Several exporters I spoke to indicated that increasing pressure from customers in the Asian and European markets have pushed them into supplying these fish—which can be risky for the exporter.”

It’s noteworthy that with construction of the Belo Monte Dam, which threatens to wipe out the Zebra Pleco in its native habitat, aquarists who are openly willing to buy wild-caught fish are turning a blind eye to smuggling. Some individuals involved in the clandestine trade privately rationalize their purchases on the grounds that the fish were doomed anyway, so they might as well be exported and bred by aquarists. Within U.S. breeding circles, there are those who take a different, high-minded position: If Brazil is dead set on destroying the Zebra Pleco (by building dams), then there is a moral highground in supporting the smuggling. Ironically, one arm of the Brazilian government is set on saving a species that is potentially doomed by other seemingly unstoppable national plans to build hydroelectric dams in the vast Amazon rainforest.

Still, many others believe any tolerance of smuggling can prove to be a black eye for the aquarium trade. Tuccinardi paints a cautionary picture: “To me, this ongoing trade is worrying because of its implications with the Lacey Act (which forbids importation of plants or animals illegally obtained from their country of origin).”

How will the CITES listing help curtail smuggling? Any H. zebra leaving Brazil will have to come with a state-approved export permit, not likely under current conditions. Since neighboring Peru and Colombia are both CITES signatories, illicit imports of H. zebra into their countries will now be harder to pull off without risking legal consequences. Companies in Peru and Colombia will now have to issue certificates of origin for any H. zebra they authorize for export. These countries’ export authorities can no longer turn a blind eye to where these fish are coming from (in the past this was a practice used to launder the plecos into other countries). Inspections in importing countries, like the U.S., will now know to look for those export certificates or certificates of origin with every Zebra Pleco entering the country, something that hasn’t been required before.

“I imagine Brazil has been frustrated by how difficult it has been to stop this smuggling,” noted Tuccinardi. “As a country, Brazil tends to be deeply protective of their natural resources, especially when other countries may be reaping the benefits of what they see as their own biological property.”

There are very few places in the world where CITES doesn’t apply. Member countries shown shaded in green; abstainers in white. Source: CITES.org

It’s been over a decade since wild-caught H. zebra could be legally obtained in the aquarium trade. This should have been ample time to produce a thriving aquaculture effort behind this highly-coveted species, but despite rumors of large scale production now occurring in Asia, U.S.-based customers haven’t really seen the full benefit of that production yet. Prices remain much higher now than they ever were, with online retail prices often in the $300 to $400 range, and even localized successful breeders asking $150 to $200 per fish.

Tuccinardi provides some insight. “They’re not super fecund, and the breeders who work with them that I’ve met report inconsistent breeding. That, combined with high local demand for the fish, keeps the price inflated. The prices are dropping, but slowly. I doubt you’ll see this fish retail for less than $150 anytime soon.”

Still, AMAZONAS Senior Editor Stephan Tanner noted that U.S. prices are slowly falling. “Zebras from Indonesia are coming in regularly to [a West coast supplier], who wholesales them for [under $100], so the price is coming down.”

Even so, it may be a long time before supplies get to the point of meeting the aquarium hobby’s insatiable demand for this glorious suckermouth catfish. With a CITES Appendix III listing potentially heading off at least some illicit trade in poached Zebra Plecos in the next few months, the near-term supply is expected to get smaller, not larger. If so, insiders say to expect an uptick in price.

Meanwhile, the drama facing the wild populations of Hypancistrus zebra in the Rio Xingu are of critical concern to many conservation biologists who are waiting to see what the impacts of the massive Belo Monte hydroelectric projects have on endemic Brazilian species in the wild. In the worst-case scenario, the only living Hypancistrus zebra specimens left on the planet will be in the tanks of public and private aquarium keepers.