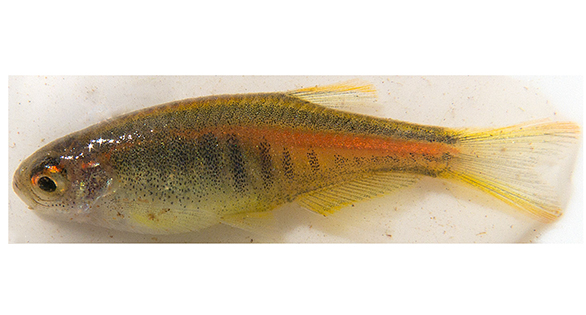 A live specimen of the newly described Danio htamanthinus from the new Zootaxa paper by Kullander and Norén.

Kullander is no stranger to the complex, having also described D. flagrans in the 2012 paper Description of Danio flagrans, and redescription of D. choprae, two closely related species from the Ayeyarwaddy River drainage in northern Myanmar (Teleostei: Cyprinidae), published in the journal Ichthyological Exploration of Freshwaters.

With the Glowlight Danio species flock now at three extremely similar-looking fish, what’s a hobbyist to do? The authors’ discussion of the three species alludes to the difficulties one may have in differentiating them:

“Danio htamanthinus has nearly the same colour pattern as D. choprae with several distinct vertical bars on the side. This colour pattern is almost the same as in D. flagrans, in which species, however, the vertical bars tend to be broader and more irregular. In life, all three species have a bright red or orange stripe from the middle of the side to the base of the caudal fin. The similarities in colour pattern are indicative of a close relationship, supported by DNA analysis (Fig. 6). Danio choprae occurs in the upper Ayeyarwaddy River drainage, with type locality near Kamaing, close to Myitkyina (Kullander, 2012), whereas D. flagrans is known only from near Putao, in the Mali Hka drainage, a tributary of the upper Ayeyarwaddy River (Kullander 2012). The relatively scattered localities are due to limitations of access to other areas in the Irrawaddy drainage, and the distribution of each species may be expected to be greater.” 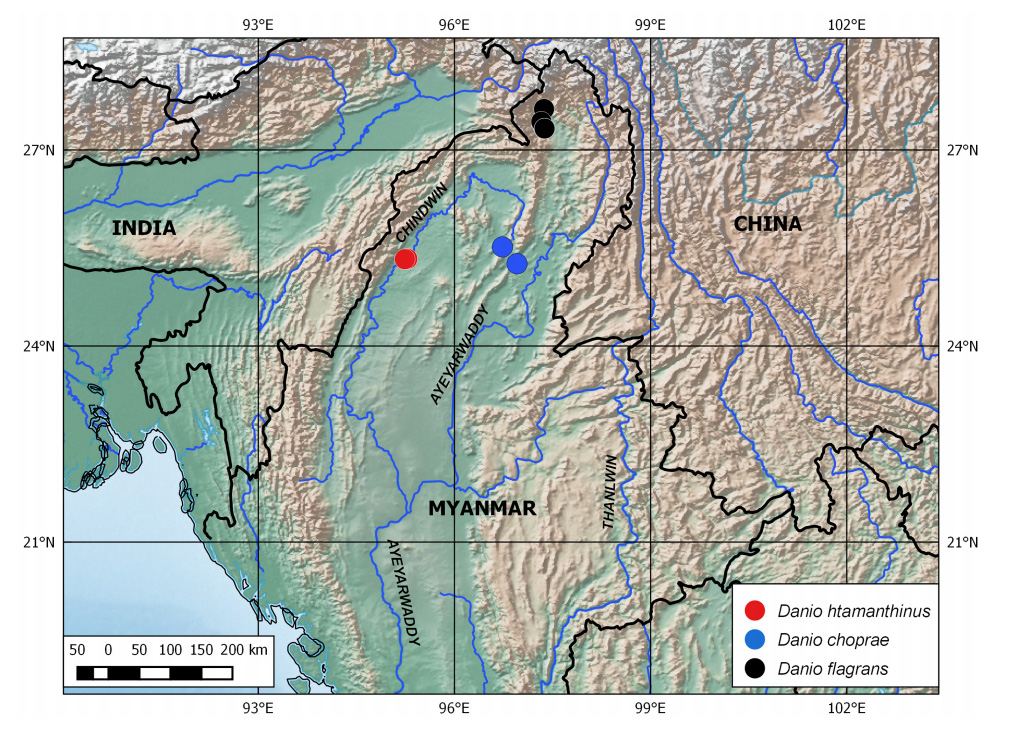 So, for the moment, while truly detailed observations could maybe suss out the identity of wild-sourced fish, it is perhaps most easily discerned by knowing the precise collecting location of the fish in question, at least as a starting point. Based on their current known locations, while we now know D. flagrans as the “Northern Glowlight Danio,” might we come to know D. htamanthinus as the “Western Glowlight Danio”?

It’s also worth noting that there is still debate over the genus assignment of these fishes, with multiple references and vendors currently using the genus Celestichthys for these three species, along with the fish we know as “Galaxy Rasboras” or Celestial Pearl Danios, Celestichthys margaritatus, and the “Dwarf Emerald Rasbora,” Celestichthys erythromicron. Other references are clearly continuing to support the inclusion of the Glowlight species in the genus Danio; the authors include their reasoning for not supporting Celestichthys in this paper’s discussion.

As a matter of personal observation and opinion, based solely on the behavior of aquarium trade D. choprae, when compared to both C. margaritatus and C. erythromicron, it’s really easy to see a difference that goes beyond genetics and outward appearance. D. choprae is an active, out-in-the-open schooler in my aquariums, whereas both C. margaritatus and C. erythromicron are cryptic, shy fishes that spend a great deal of time lurking among the plants, even in the most heavily-planted aquariums. Based on other accounts, it is likely that D. flagrans, and now D. htamanthinus, would exhibit behaviors more in line with their sister species D. choprae. This newest publication recognizes, through genetic evaluation, that all five species in question are related, but within that group, it is clear that C. margaritatus and C. erythromicron are sister species. “Who should be called what?” is clearly a contentious issue, and as you can see by my own usage here, we all have our opinions.

You can read the full open access paper describing D. htamanthinus at http://biotaxa.org/Zootaxa/article/view/zootaxa.4178.4.5/24026