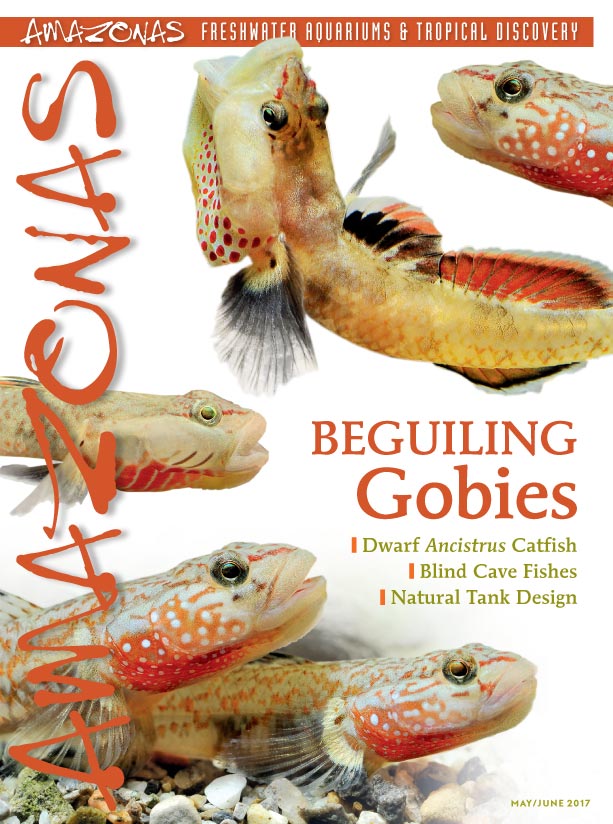 The May/June 2017 Issue of AMAZONAS Magazine is printed and now on its way to magazine subscribers, local aquarium shops, and better bookstores.  On sale April 4th, 2017.

Readers of the Digital Edition can access it now: AMAZONAS DIGITAL EDITION
Paid subscribers can log in with their email addresses for instant access. The AMAZONAS digital version is available for desktop and laptop computers and tablets.

HEREWITH, A sampling of articles and opening pages for readers curious about what the issue will bring. 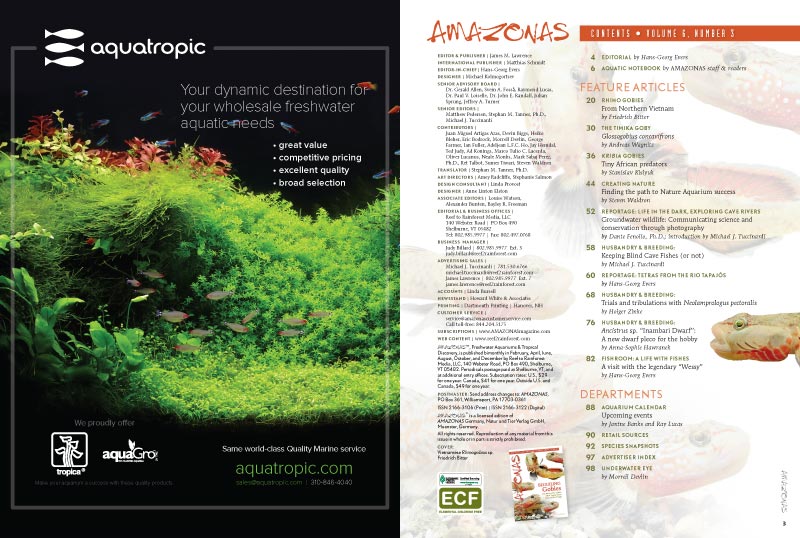 The Table of Contents: a first look at the comprehensive Rare Gobies coverage and diverse content throughout the issue. Read the TOC online here. 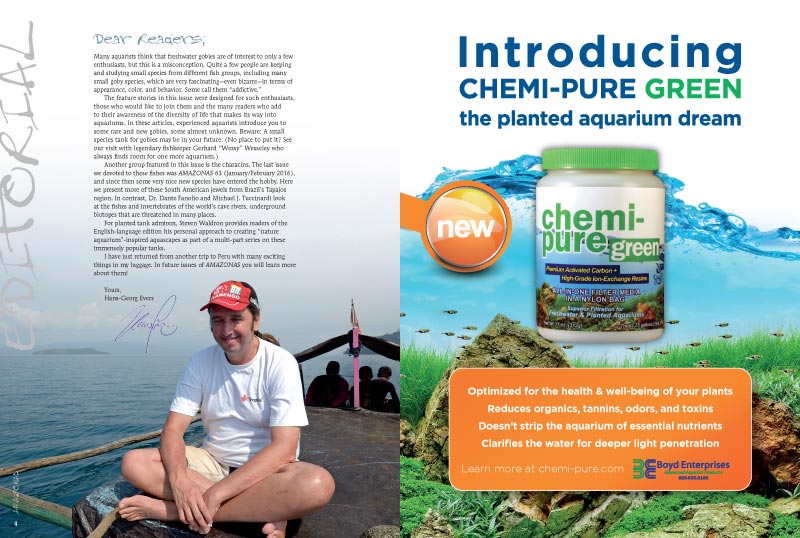 “Many aquarists think that freshwater gobies are of interest to only a few enthusiasts, but this is a misconception.” – AMAZONAS Editor-in-chief, Hans-Georg Evers, introducing the new issue. 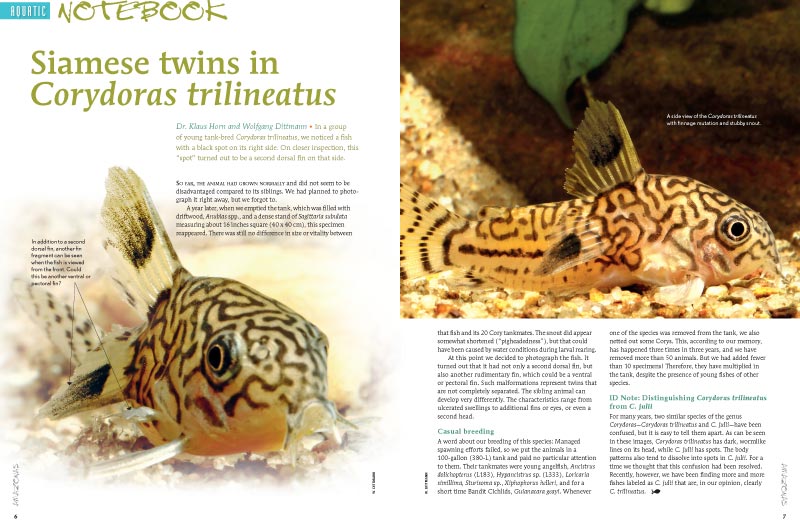 “In a group of young tank-bred Corydoras trilineatus, we noticed a fish with a black spot on its right side. On closer inspection, this ‘spot’ turned out to be a second dorsal fin on that side.” Aquatic Notebook begins with the curious tale of “Siamese twins in Corydoras trilineatus,” as told by Dr. Klaus Horn and Wolfgang Dittmann. 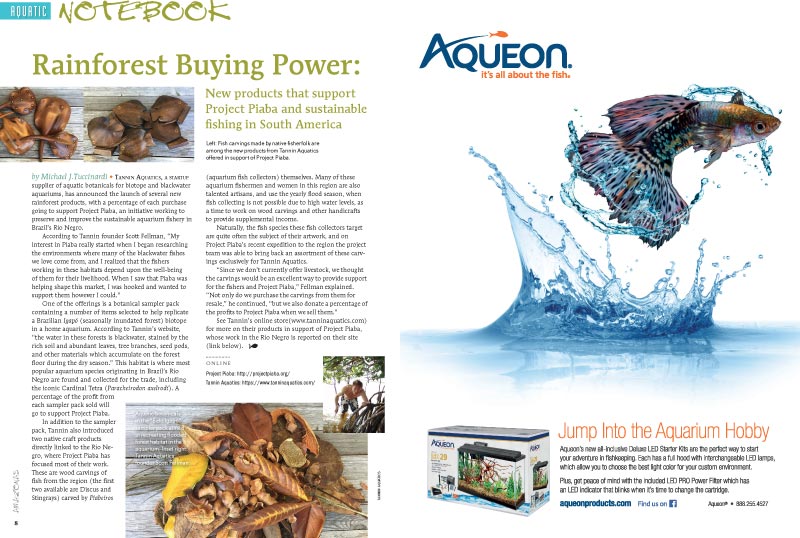 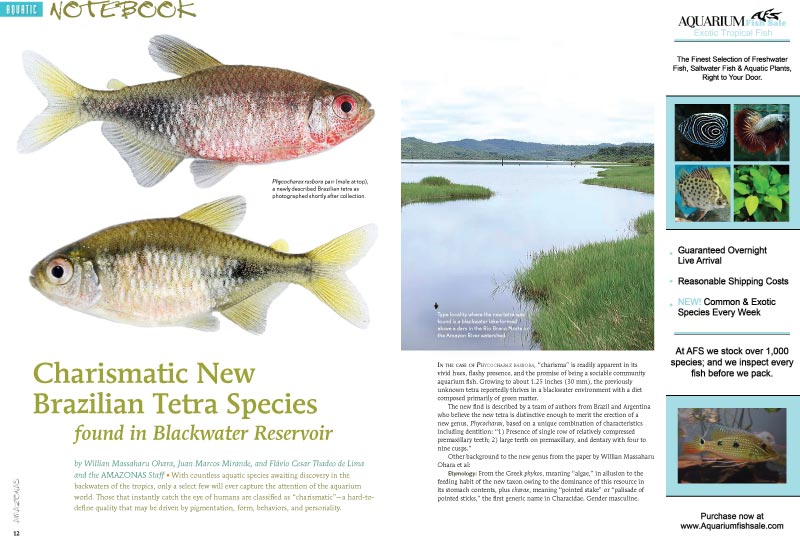 Aquatic Notebook highlights a newly described small tetra with the potential to become popular with breeders and mainstream aquarium keepers. 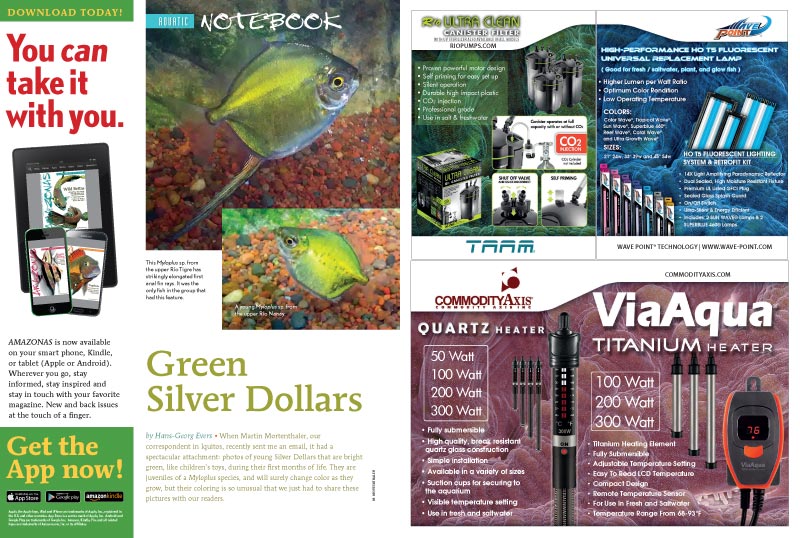 Hans-Georg Evers takes a closer look at some spectacular and unusual juvenile green Silver Dollars that have been spotted in recent import shipments. 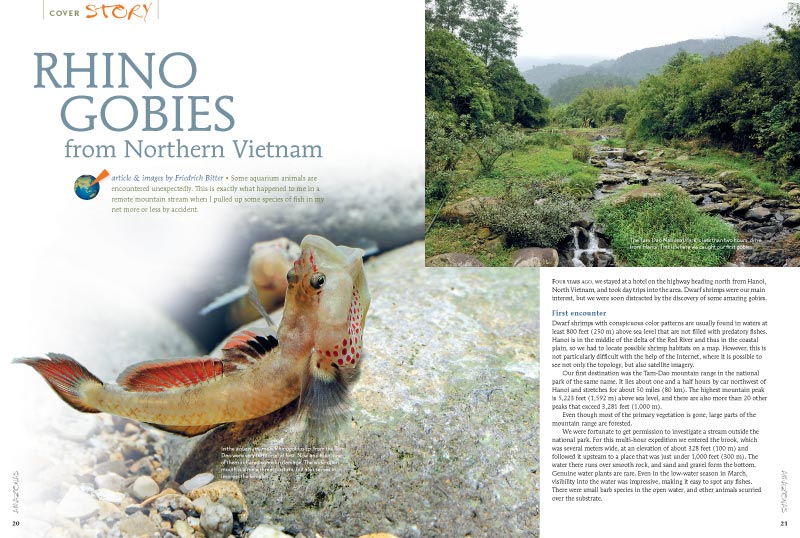 “Some aquarium animals are encountered unexpectedly. This is exactly what happened to me in a remote mountain stream when I pulled up some species of fish in my net more or less by accident.” Join Friedrich Bitter on a species-finding expedition to northern Vietnam. 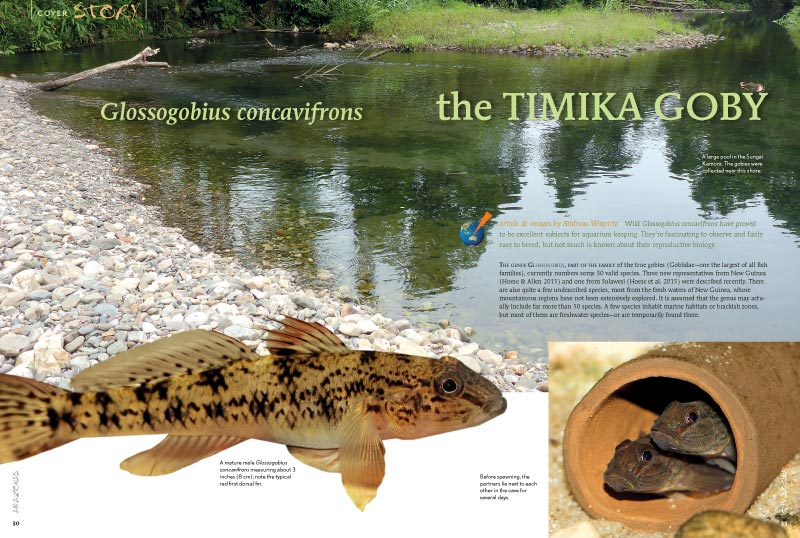 Meet the Timika Gobies: “…excellent subjects for aquarium-keeping. They’re fascinating to observe and fairly easy to breed, but not much is known about their reproductive biology.” 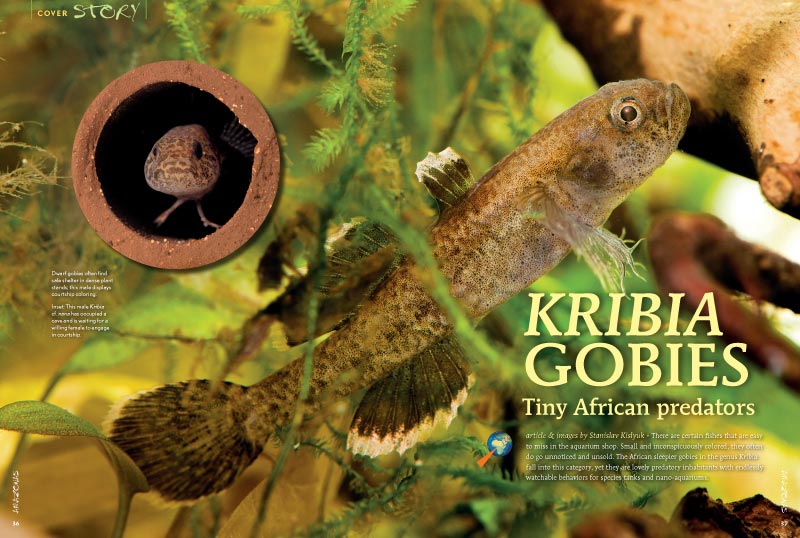 “The African sleepier gobies in the genus Kribia are lovely predatory inhabitants with endlessly watchable behaviors for species tanks and nano-aquariums.” Stanislav Kislyuk shares his experiences. 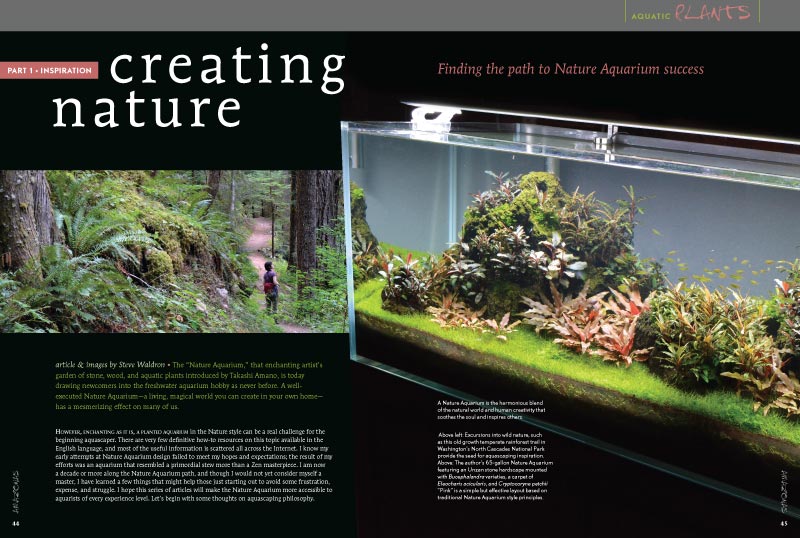 “The ‘Nature Aquarium,’ that enchanting artist’s garden of stone, wood, and aquatic plants introduced by Takashi Amano, is today drawing newcomers into the freshwater aquarium hobby as never before,”  says Steve Waldron in starting his new series, Creating Nature, to help AMAZONAS readers find a path to planted tank success. 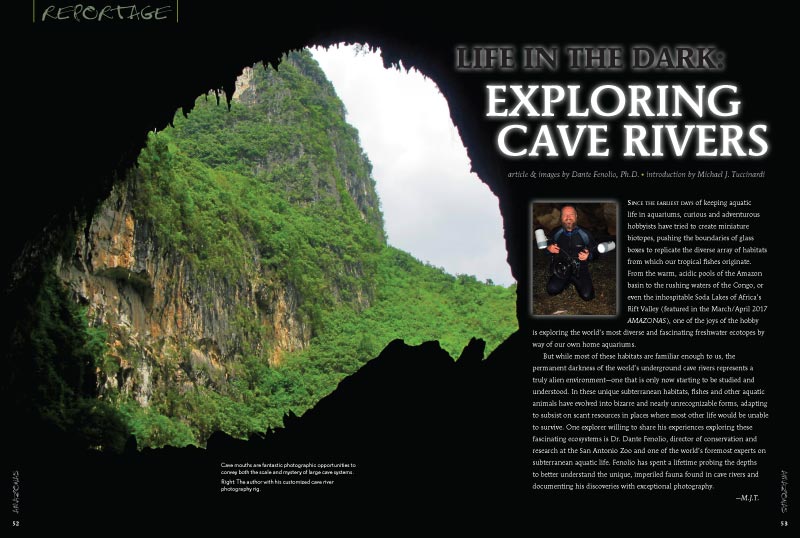 “Get way outside your comfort zone and experience,” says cave river explorer Dr. Dante Fenolio, with a introduction by Michael J. Tuccinardi. 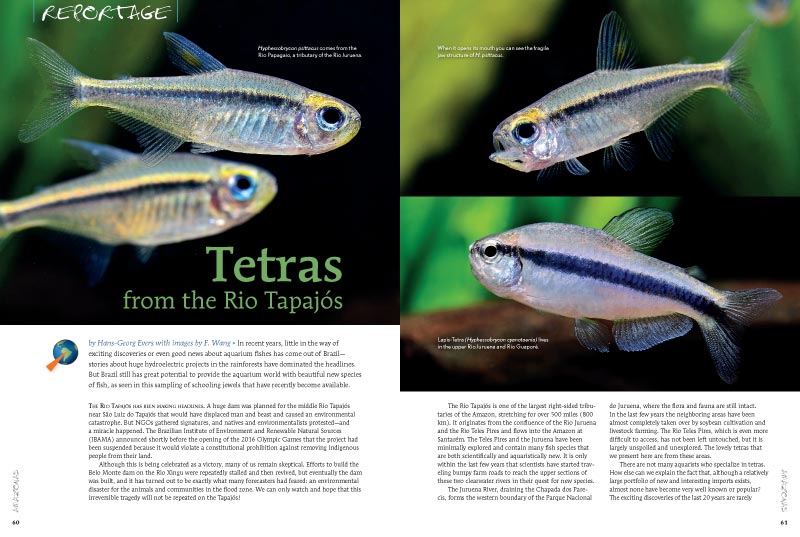 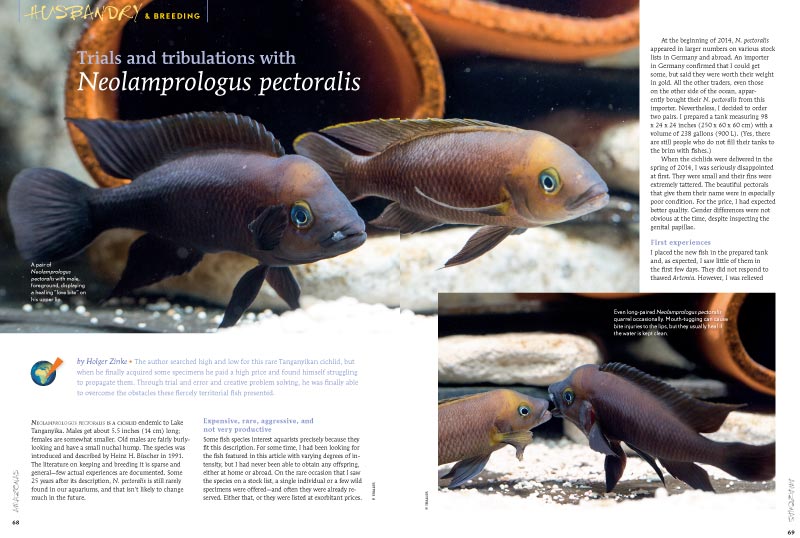 Are you up to the challenge? Holger Zinke shares his experiences with a fiercely territorial African cichlid, Neolamprologus pectoralis. 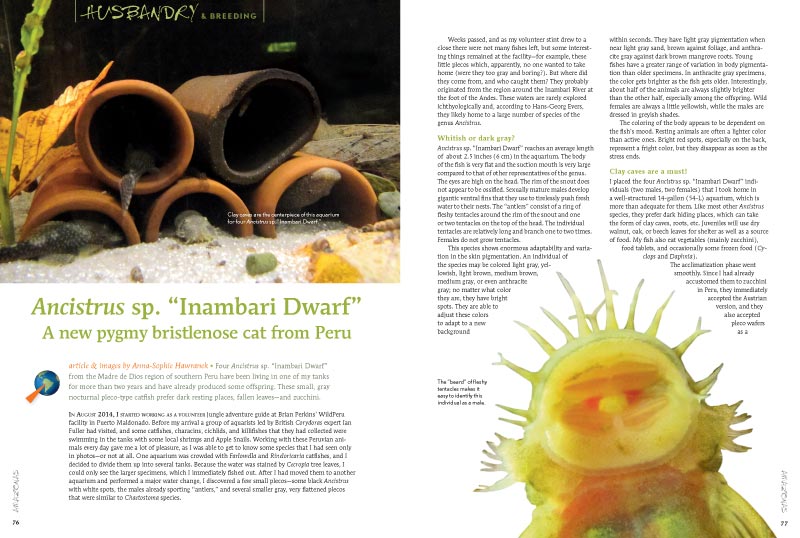 Pleco lovers, get acquainted with Ancistrus sp. “Inambari Dwarf”: A new pygmy bristlenose cat from Peru that has caught the attention of amateur breeder Anna-Sophie Hawranek.

Get to know the legendary “Wessy,” whose breeding aquariums fill every nook of his Bavarian home—even the family bathroom, where the author spotted courting catfish during an unforgettable afternoon visit. 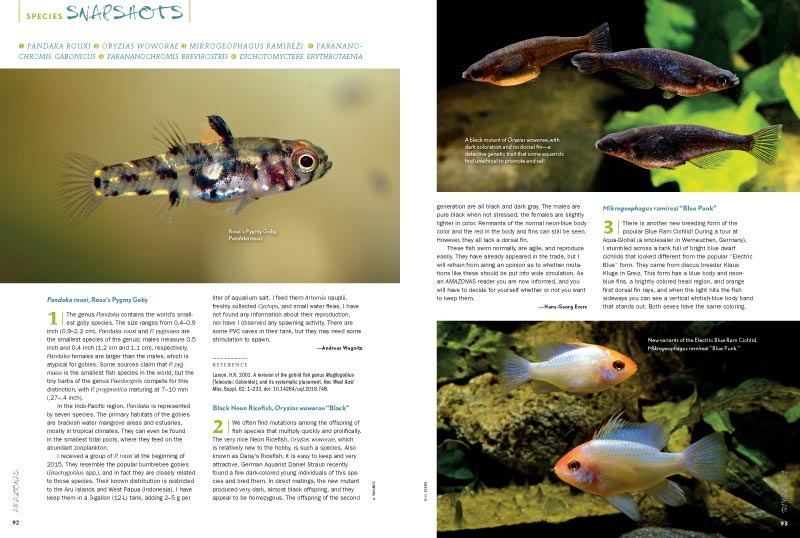 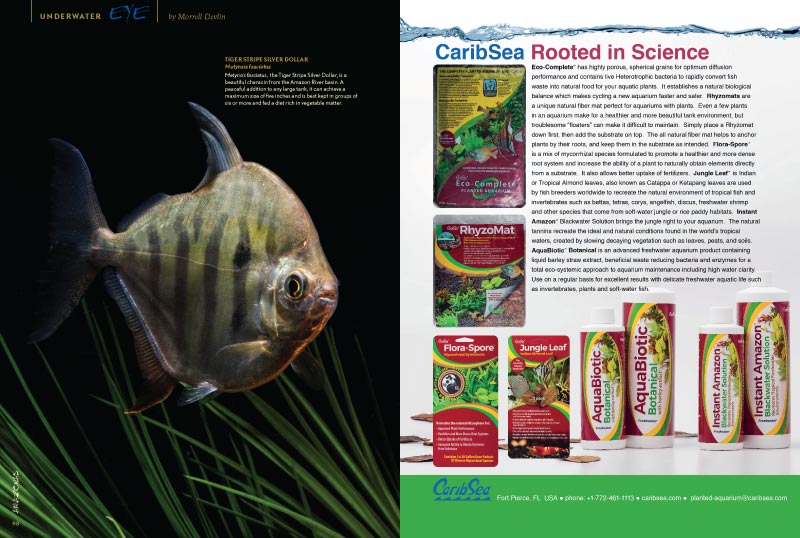 Closing the issue is a beautiful Tiger Stripe Silver Dollar as photographed by Morrell Devlin, who says this peaceful shoaling species looks spectacular when kept in groups in a large aquarium—something for the rest of us to dream about.

• Already a subscriber? ACCESS this issue now!
AMAZONAS subscribers can log in with their email address and read the Digital Edition and App Editions immediately.