Whether you’re a fan of Loricariids or Callichthyids, March 30th, 2017, was a good day: the journal Neotropical Ichthyology published two new species descriptions that are sure to get your heart racing. With both papers published as open source, you have a front row seat to see and learn everything there is to know about them. 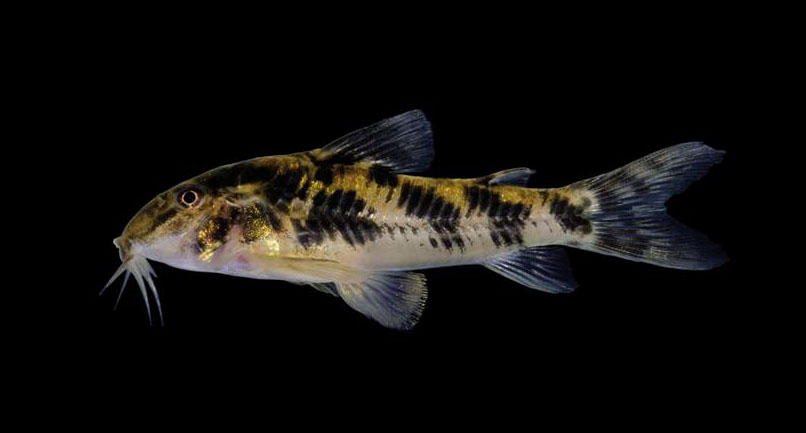 Catfishes of the genus Aspidoras are known for their small size, otherwise appearing similar to the related Corydoras. The newest species, Aspidoras kiriri, comes in mean standard length of only 26.9 mm (approx. 1 inch)! A. kiriri has been described by Lívia M. A. Oliveira, Angela M. Zanata, Luiz F. C. Tencatt, and Marcelo R. Britto in the paper “A new species of Aspidoras (Siluriformes: Callichthyidae) from a small coastal drainage in northeastern Brazil.”

The genus as a whole is restricted to Brazil; this new species hails from the northeastern region, specifically the headwaters of the Rio da Dona river basin, “a small coastal drainage that runs through the Atlantic Forest in Bahia State.”

Ecological notes. The Rio da Dona enters the Atlantic Ocean near Ilha de Itaparica, Bahia, and its headwaters drain the eastern slopes of Serra da Jibóia. The area is located in the Atlantic Forest and Caatinga domains (1977), and includes mountains that reach 800 m above sea level and moist hillside forests characteristic of northern Bahia. The new species occurs in small streams crossing the Atlantic Forest, at 244-303 m above sea level. The Cai-Camarão tributary, type-locality of the new species, is 1-4 m wide and 20-40 cm deep, and has a rocky bed alternating with sand and organic debris. Specimens were sampled from small pools in stretches of rapids or larger pools below the rapids. The water temperature during the period of sampling was around 21.0 ºC, pH 4.55 and dissolved oxygen 7.3 mg/l. At this location, Aspidoras kiriri was sampled syntopically with Astyanax bimaculatus (Linnaeus, 1758), Astyanax sp., Characidium sp., and Trichomycterus sp. A second tributary, the Rio Sururu, is similar overall, but severely impacted where sampled, almost dry due to its proximity to road BA-495 and water removal for human use. The few specimens gathered from Rio Sururu were found in very small mud-bottomed pools less than 10 cm deep.

Etymology. They are named after the Kiriri Indians who originally inhabited a broad area in eastern Brazil. Nowadays, they are restricted mainly to the municipality of Banzaê, in northern Bahia. The name of the indigenous people can be written as Cariri or Kariri and has its origin in the Tupi language, meaning silent, taciturn. A noun in apposition.

Additional information, photos, and a distribution map can be found in the open access journal article, published in Neotropical Ichthyology: http://www.scielo.br/scielo.php?script=sci_arttext&pid=S1679-62252017000100214&lng=en&nrm=iso&tlng=en 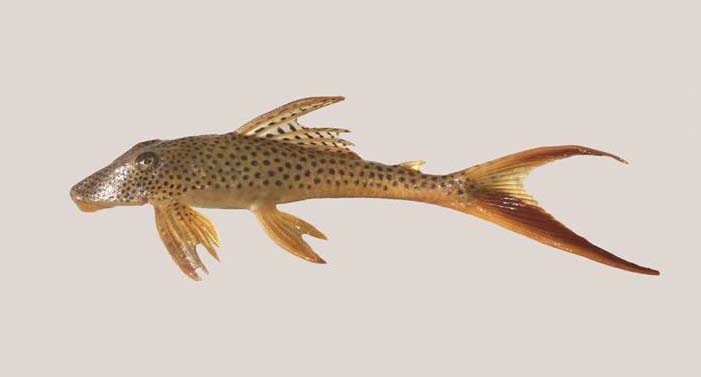 The newly-described Aphanotorulus rubrocauda just *looks* fast, a spotted roadster of a pleco sporting a deeply forked caudal fin. This species’ streamlined appearance belies its native habitat; swift-flowing sections of the Rio Aripuanã basin in Brazil. The namesake caudal fin bears red coloration on both upper and lower lobes as a juvenile, but only the bottom lobe retains this coloration in adulthood. This is a species with the some potential for larger size; specimens ranging from 72.4 – 240.5 mm (2.85 – 9.46 inches) were recorded. There is virtually no husbandry information available for Loricariids of the genus Aphanotorulus, with only a few registered keepers of the related Aphanotorulus ammophilus on PlanetCatfish.com. The former inclusion of today’s Aphanotorulus spp. within the genus Hypostomus may, or may not, provide insights, should you be lucky enough to be face-to-fin with a specimen of this new species.

Geographical distribution and ecological notes. The new species was found in fast-running waters of tributaries of the Rio Aripuanã basin, a right bank tributary of the Rio Madeira that stretches from the Mato Grosso to Amazonas States (Fig. 4). The Rio Aripuanã is a dark-colored-water river, poor in sediments, with cataracts, large boulders, and a rocky bottom from its middle reach upward, stretching approximately 800 km from its headwaters until its confluence with the sediment-loaded Rio Madeira. The Rio Aripuanã receives many clear-water, rocky-bottom tributaries that drain the Brazilian Shield. 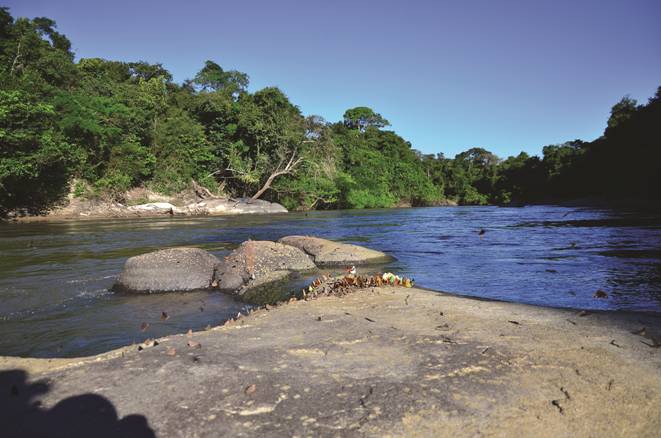