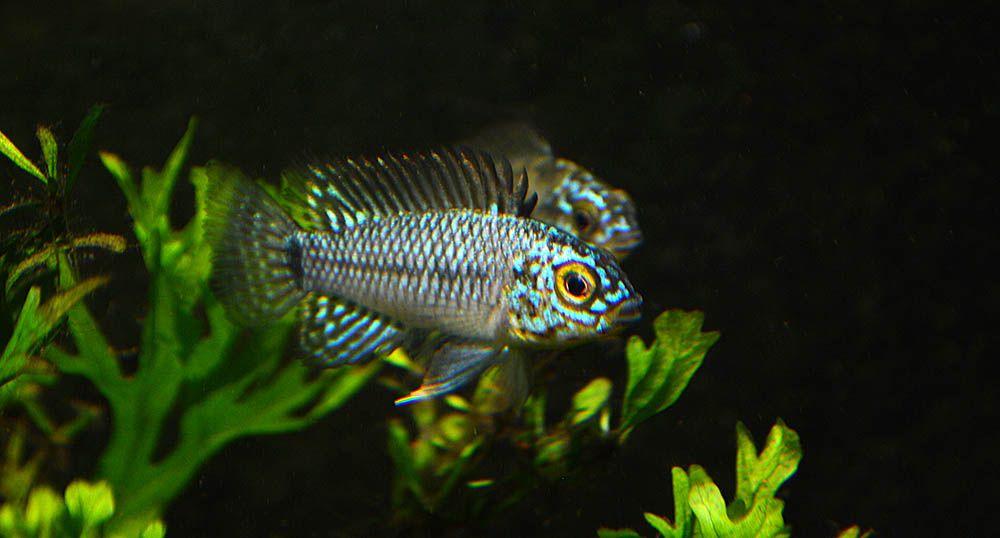 Ordering blindly to try something *new to you* can be fun, but challenging…

In Duluth, Minnesota, we’re blessed with a phenomenal municipal water supply. Our water comes from the starting end of Lake Superior. It’s cold and relatively clean, with very little in the way of dissolved constituents; the TDS typically comes in at 43 ppm. Interestingly, the pH out of the tap seems to be near 9.0; I’ve been told that our pH is artificially raised to prevent leaching from lead pipes in the often 100-year-old (or older) homes that make up most of our real estate. This water comes in stark contrast to that of my native Chicago, which was liquid rock (those of you in Texas purportedly have similar issues to contend with).

Back in Chicago, in my early days as an aquarist, the local tap meant a strong emphasis on fish that would do well in it; hence, African Cichlids were big business. Trying to keep Discus at home largely proved a futile effort in my well water, but at the time convincing my parents to tolerate an RO system wasn’t a conversation to be had! Now, decades later, and facing soft water straight out of the tap, I realize how blessed I truly am. Case in point, once I stopped listening to all the experienced aquarists who told me I needed to adjust my water to specific parameters in order to be successful with Pterophyllum altum, wow—to my surprise, when I’d  just stick with the local tap and ignore the incoming pH, these purportedly difficult Angelfish thrived. Of course, I had no problems whatsoever breeding domestic Angelfish.

All of this sets up the background for today’s story. It’s been a while since I shared a Friday Photospread, but these new additions warranted some coverage. Once the arguably no-brainer concept of selecting fish that did well in my tap water finally sank in, it opened me up to trying things like Discus again (fingers crossed, two nice pairs are biding their time here). Another group of fish that I really had never given my attention to was the entire genus Apistogramma. Sure, we sold them on occasion in the shops and wholesale operation, and I may have “cared” for them for weeks or months on end. But that’s not entirely the same as what you do in your own fish tank, and I never personally gave Apistogramma the time of day in my home aquariums. After some 35 years keeping fish, I recently concluded that I should get with the program and at least try some Apistos!

Which leads me to last week’s arrivals. Ordering Apistogramma agassizii “Neon,” I had a general idea of what I would be getting, or so I thought. I expected a fish with a broad lateral stripe, probably some red in the fins, and a spade-shaped tail. What arrived didn’t fit that expectation! 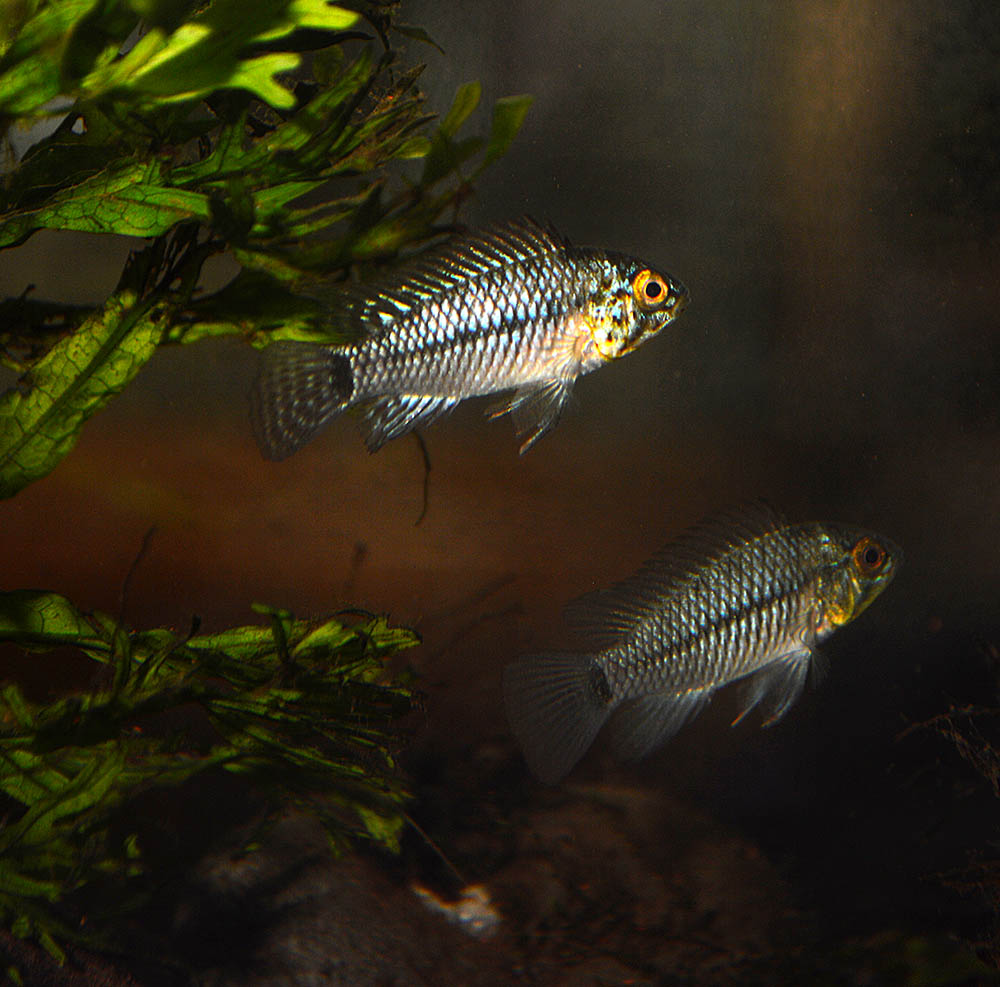 This does not fit my general conception of Apistogramma agassizii. Now what?

The dwarf cichlids that arrived most certainly were Apistogramma sp, but they had me scratching my head. They are small, less than 1″ (2.5 cm), so they’re juveniles and probably not showing adult coloration. OK, time to actually do my homework. 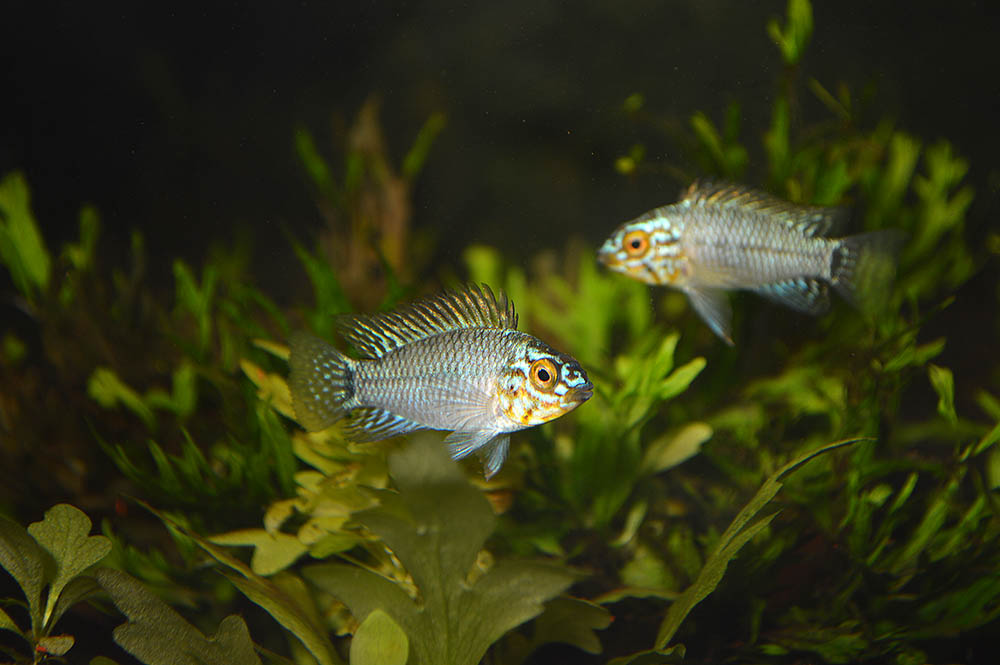 So what exactly are these?

Searching for Apistogramma agassizii “Neon” didn’t turn up much; in fact, only one unanswered forum post from 2001 even shared the same name. 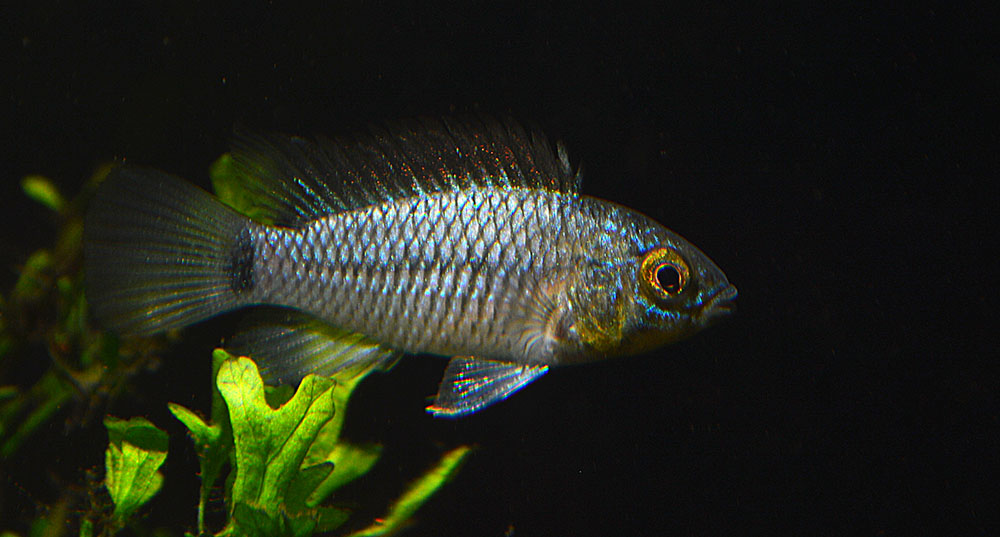 So this was sold as Apistogramma agassizii “Neon”… 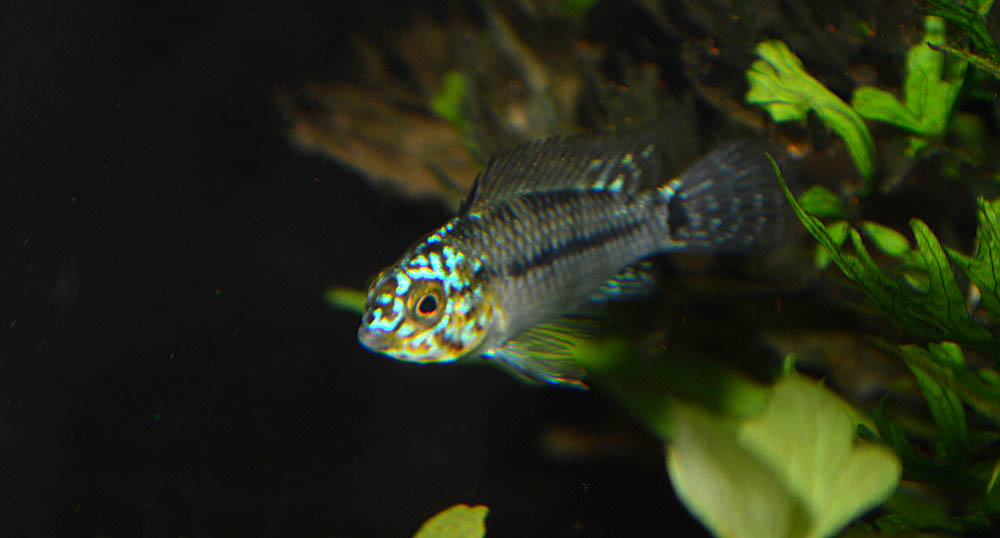 Clearly, I’ve stumbled up against a long-standing aquarium trade issue: “trade” names. That is to say, the name applied to a fish may not be anything standard, and it may not be correct. When this happens, you’re left trying to figure out what you actually have.

Of course, this is why advanced aquarists often gravitate towards working with specialists in a given interest group. But I’m not about to start breeding Apistogramma pantalone just yet; I only wanted to see how a random Apisto would fare in my fishroom (and my tap water). Going with the most affordable Apisto available was the mission, and as such, I got what I paid for. But what exactly is it? 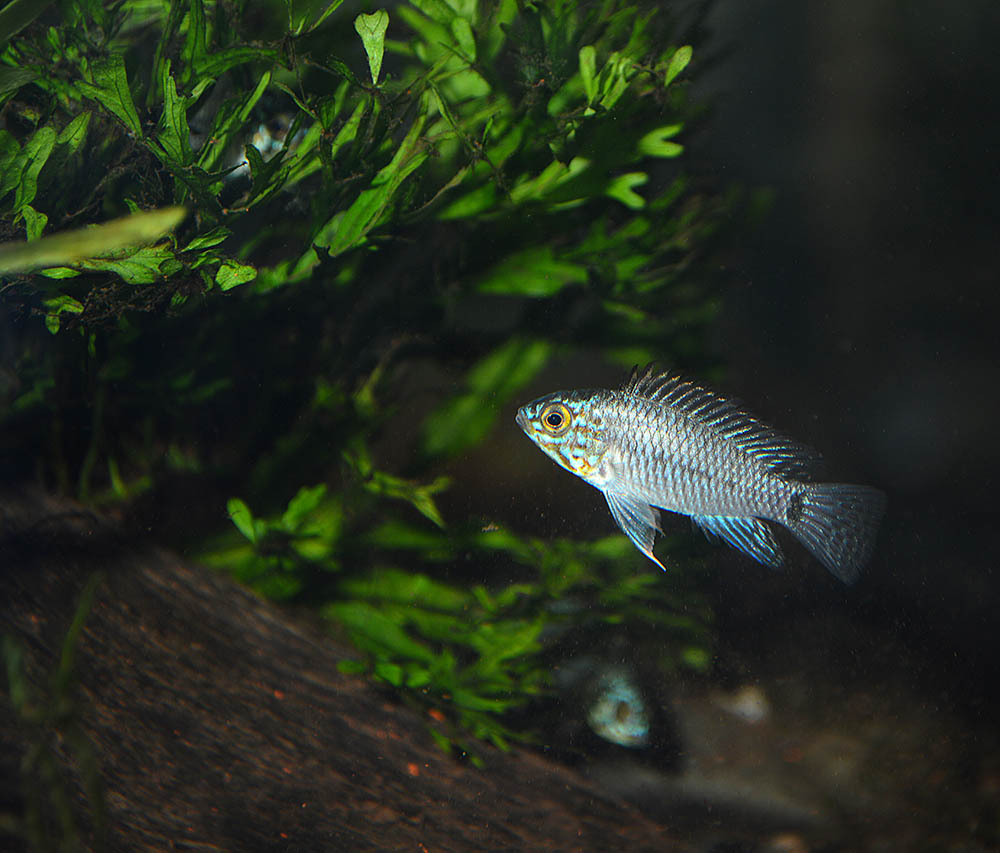 They look to be doing well, after only a week in my care!

The mystery fish settled in without any issues and seem to already be thriving in my soft tap water. Within a few days I started noticing some colorful displays and interactions. 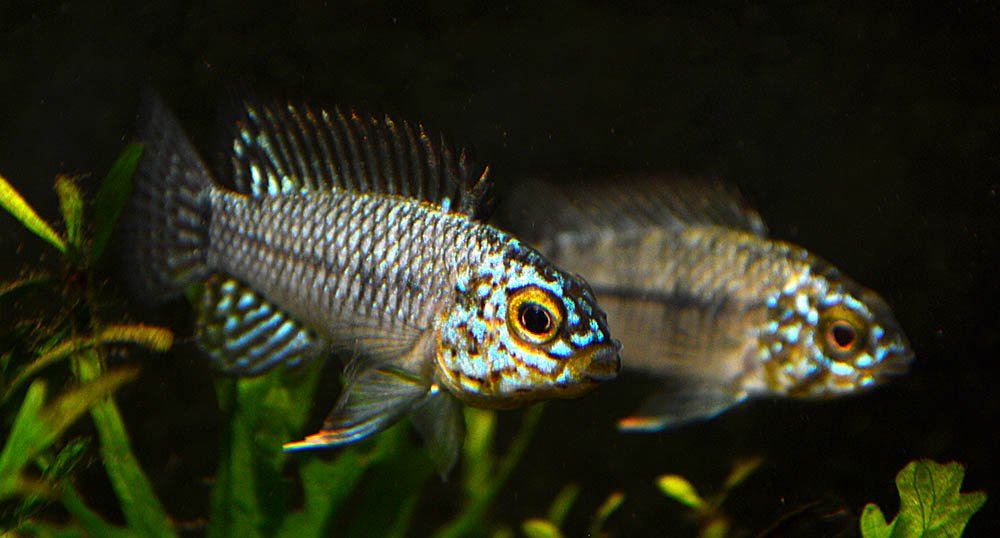 Not even an inch long, and they’re already putting on impressive displays.

So what are these mystery fish? I think I found my answer. What tipped me off was Google’s image search results, which showed some fish that looked similar to (if not exactly the same as) what I had received. Following up on those leads, I started seeing trade names applied, including “Blue Face,” “Steel Blue” and “Neon Head.” 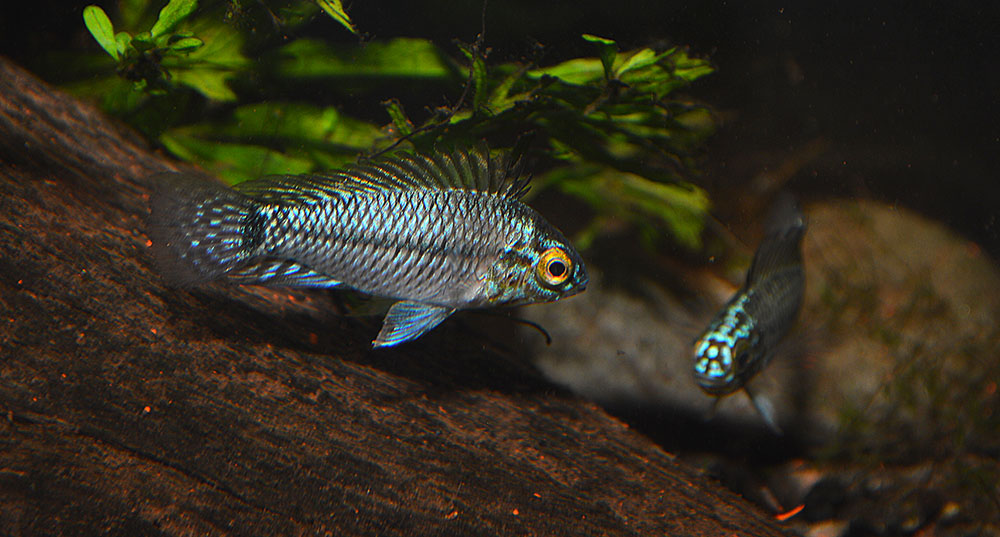 Whatever they are, they’re certainly attractive.

Of course, when I started researching these blue Apistos on the Internet, my heart sank a little bit. Yes, I am a species-purist snob with a conservation streak, which means I am a bit anti-hybrid. If I was to believe what I was reading, then it would appear that these mystery Apistos are a variety most commonly known as Apistogramma sp. “Steel Blue” (or whatever name you’d like to call them), and the general information out there seems to suggest that they are likely a well-entrenched hybrid. I must mention that some online references do attribute this variant as a pure species, calling it Apistogramma caetei “Steel Blue,” while others speculate that this hybrid consists of A. caetei and A. resticulosa. Therefore, it seems like the only thing I can truly say definitively is that these fish are not representative of A. agassizii!

Looking back at the fish in the group, the notion of a hybrid could explain some of the variation I see in the fish. Males show varying amounts of pattern in the fins and face. Consider this individual, which mainly has a metallic blue wash over his entire body, devoid of any spotting or scrawled markings, and a much more yellow throat in comparison to most of the other individuals: 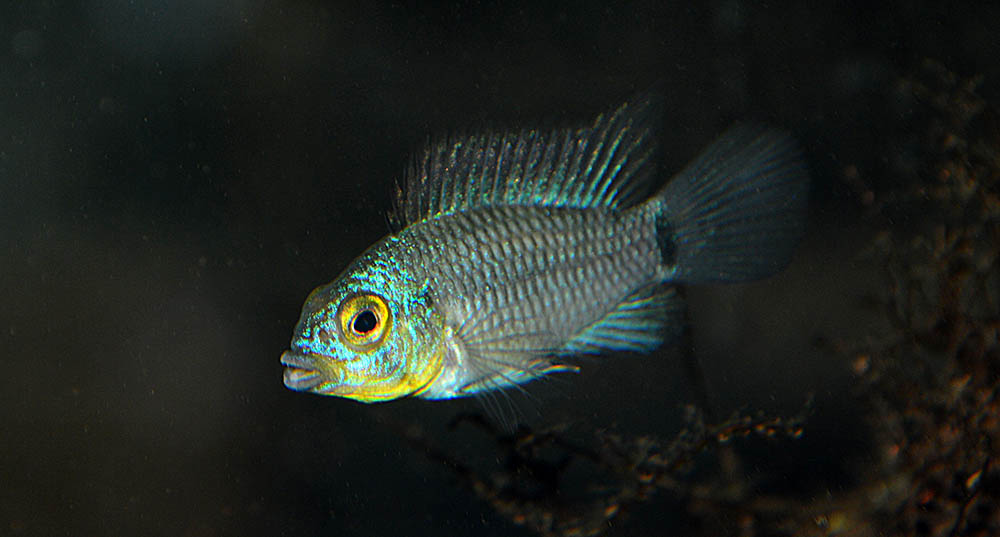 This individual stands out as a little different from most of the phenotypes in the group. Note the lack of pattern overall, and the more prominent yellow throat.

Females do appear to be in the minority, although everything I’ve read-up on Apistogramma sp. “Steel Blue” suggests that either they could be purposely held back, they’re simply difficult to discern, or even as hypothesized by one source, there could be something such as a sex-linked deformity or survival issue that prevents them from making it to market. But I have at least one definitive female in the tank at the moment. 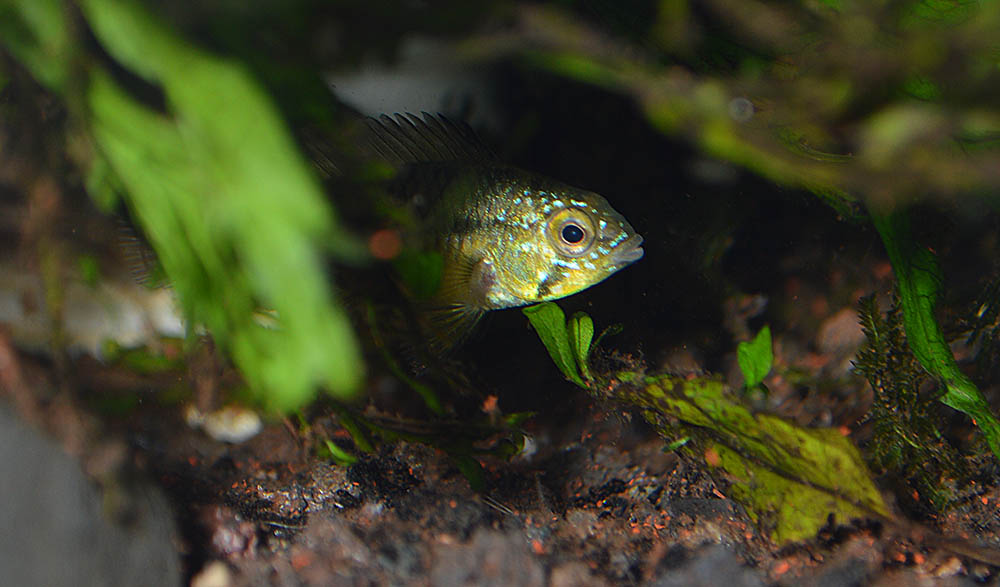 The only female in the group that I’ve been able to identify, hiding a lot, already showing yellow coloration and interacting with a male.

I have to say, whatever these Apistos actually are, they have been a welcome introduction to the genus. They are a bit feisty with each other (granted, I threw a dozen into a 20-gallon tank full of tetras, danios, and plants), but I’m not seeing any damage occurring. I should mention that many of the discussions around this variety note that these are rather aggressive little Apistos. They eat whatever I throw at them, although to be fair, what I’ve read suggests that these are among the least challenging of the Apistos available in the aquarium trade. This means they may be well-suited for a first-time Apisto keeper (myself included).

So even if their lack of provenance and dubious purity might have them on the fast track for a rather short-term stay in my fishroom, I’m already appreciating my time with them. They’re colorful and active, and certainly not shy (at least a couple will swim right up to the camera to investigate). Considering they’ve only been here one week, I’m pretty impressed with how well they’ve already settled in and how much color they show. Yes, I think I might hold onto a pair for a little while, just to see what happens next. But they’ve already served their purpose; I’m more eager than ever to try out some other Apistos!

Before I close out this edition of Friday Photospread, I have to share the Apistogramma sp. “Steel Blue” page over at DwarfCichlid.com. It is the most comprehensive reference for this species/hybrid/variant that I came across, and is probably what swayed me to conclude that this is in fact what I have (and not some strange rare Blue form of Apistogramma agassizii). But, hey, I’m absolutely not an Apisto expert, so those of you who are, do you think I got it right? And what else do you think I should try? I’d love to hear your thoughts in the comments below! 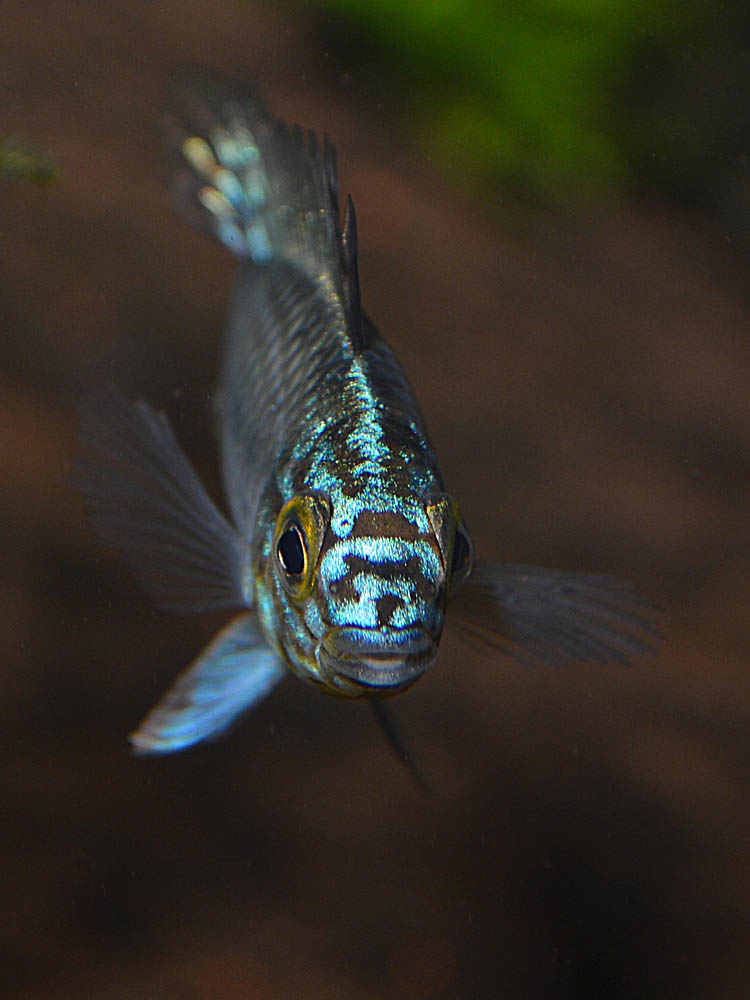 Definitely not shy, at least in my fishroom, it looks like these mystery Apistos are the fish best known as Apistogramma sp. “Steel Blue”