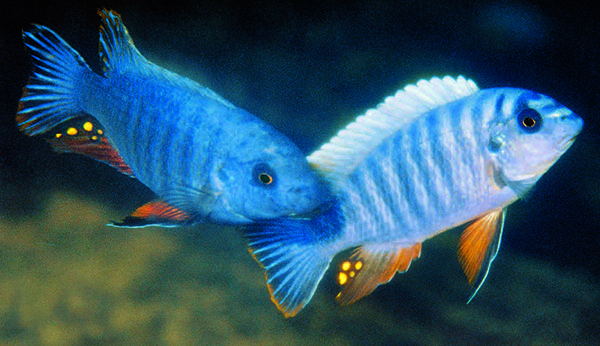 Having first come to love the East African Cichlids some 25 years ago, I’m one of those aquarists likely to use inappropriate names when referring to species that have long-standing histories in the hobby. When it comes to the “Pseudos” of the Lake Malawi mbuna flock, they were all Pseudotropheus when I started out, so now I still can’t keep my Metriaclimas and Maylandias (which to use?!) separate from my Chindongos (not yet recognized by Fishbase?) and Pseudotropheus, nevermind the genus jumping that’s been done by fish like Melanchromis cyaneorhabdos…ahem I mean Pseudotropheus cyandeorhabdos. But I should try, right?

At least I could sit comfortably in the notion that when it came to the rock-scraping algae-eating mbuna of the genus Labeotropheus, I could easily identify the two distinctive species just by looking. L. fuelleborni was deep bodied, and L. trewavasase was slender. If that’s still your understanding of Labeotropheus taxonomy, buckle up and maybe even pop a Xanax; I have some rather jarring news to share.

Dissent in the taxonomic ranks

Of course, it bears mentioning that not everyone eagerly agrees with Pauers’ assessments, as noted by Ad Konings in his 2016 editorial, Labeotropheus, splitting out of context, as published by The Cichlid Room Companion. Going back further, it is clear that Pauers has set the stage for these descriptions with the initial work, Geometric morphometrics reveals surprising diversity in the Lake Malawi cichlid genus Labeotropheus, published in 2015. 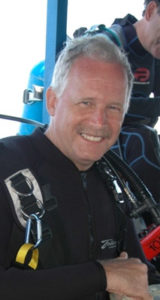 Discussing the latest addition to Labeotropheus taxonomy with Ad Konings (founder of Cichlid Press and a highly-regarded veteran cichlid scientist/author) he reiterated his view that these recent descriptions don’t match up well with his personal, firsthand observations in Lake Malawai. “The splitting problem with Pauers is caused by the fact that he has never been to the lake and observed first hand that there is quite some variation within each population,” noted Konings, “and that so-called different variants at separated localities often grade into each other with intermediate forms found in between. Even along mainly-rocky shores various sub-populations can be found that can be distinguished via DNA ‘finger printing’. But the observation of differences between populations shouldn’t mean that these are different species. I’m pretty sure that females of one population will recognize males from another, under natural circumstances, as their true mates. Such a species definition is of course not so easy to apply as a DNA sequence or some other minute morphological distinctions, but it is, in my opinion, much closer to a good species concept than the one based on detection of any differences.”

While the debate over the number of species inhabiting the genus Labeotropheus may continue for some time, here’s what I think are the take home points (for the average aquarist) from this recent work:

What you need to know

In a conservation-minded hobby, one cannot underestimate the importance of geographic provenance and purity when breeding fishes if the intent is to maintain a genetically intact sub-population of a species within captivity. While genus and species names may change, and even species or varietal status may fluctuate, the geographic origin of a particular population is the one constant that remains the same. As Pauers’ work suggests, even a single collection point can one day be split off to species status, thus, all are worthy of individual maintenance when conservation of biodiversity is the goal. Thus, breeding between collection points can inadvertently muddy captive genetics, and therefore must be avoided by any conservation-minded aquarist. Incorrect assumptions can cause future problems, or even entirely thwart the efforts of other aquarists. The name may change over and over, but the place they originate from doesn’t!

Keeping up with taxonomic updates is important, and can be confusing at times. Reviewing Pauers’ three recent species descriptions, here’s my attempt to reconcile past and present names: 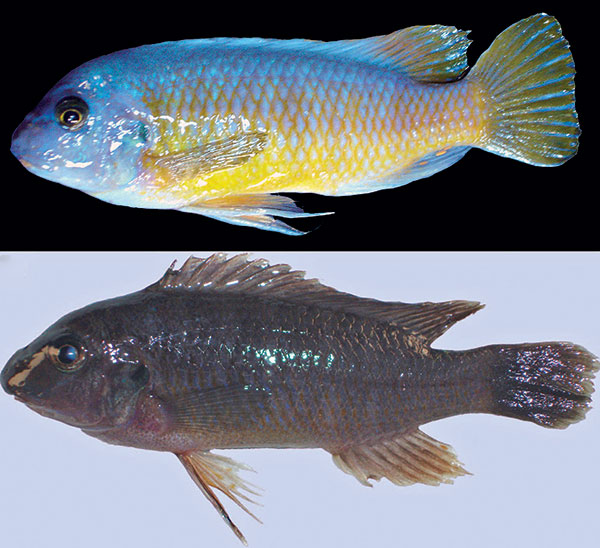 Regarding coloration, Pauers cites Konings when remarking that, “Males and females of L. chlorosiglos are known to [also] occur in an ‘orange-blotched’ (OB) color pattern [variant] (Konings, 2007)” 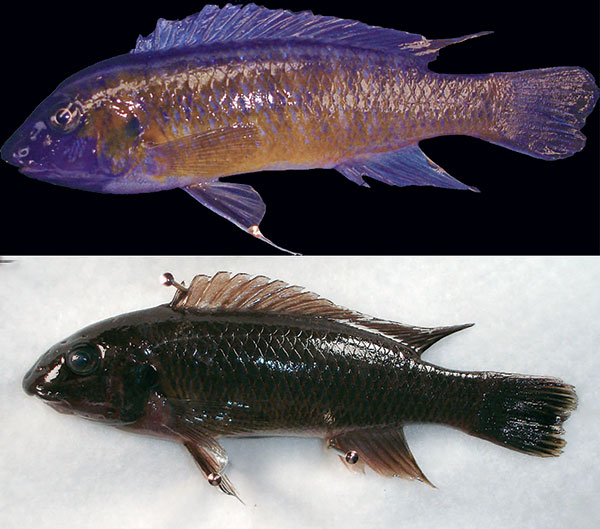 Labeotropheus trewavasae “Katale” becomes Labeotropheus simoneae “Katale.” Yes, both of the new species described by Pauers in 2016 were sympatric, collected from the same location. Differentiating the males of L. simoneae from L. chlorosiglos found at Katale is rather easy; males of L. simoneae have orange operculums, whereas L. chlorosiglos has blue operculums. Differentiating the females is more difficult, as both are more or less brown in coloration, the most obvious difference stems from a fundamental difference in body shape (L. simoneae being far more slender than L. chlorosiglos).

Pauers mentions no color variants (no OBs) for this species in the wild. One online comment suggests that L. trewavasae “Chilumba” (and thus presumably also the popular “Chilumba Red” form) ought to be considered L. simoneae, although Pauers’ paper doesn’t initially support that connection. Instead, Pauers notes, “[L. simoneae] is restricted to the submerged reef near Katale Island. It is likely that it is only found at this location [emphasis added], though more fieldwork must be done to confirm this.”

Labeotropheus fuelleborni “Mumbo” and “Thumbi West” are now best referred to as Labeotropheus artatorostris “Mumbo Island” and “Thumbi West Island.” OB (Orange Blotch) females are noted as a rare occurrence for this species in the wild. Discussing some of my own confusions with Konings, he noted that there is a sympatric “Red Top” population of L. trewavasae at Thumbi West.

This new species may range further than currently recorded. Pauers suggests, “Arnegard et al. (1999) report deep-bodied Labeotropheus possessing similar male nuptial coloration along the eastern coast of the Nankumba Peninsula from Songwe Hill northwest to the Ilala Gap, including Zimbawe Rock….[L. artatorostris may also] possibly be found at the Mitande Rocks on the eastern end of Thumbi West Island, but specimens from Mitande are rare in museum collections. Further fieldwork in Lake Malawi is necessary to determine the full distribution of L. artatorostris.”

Special thanks to Ad Konings for his quick review and commentary on this article.