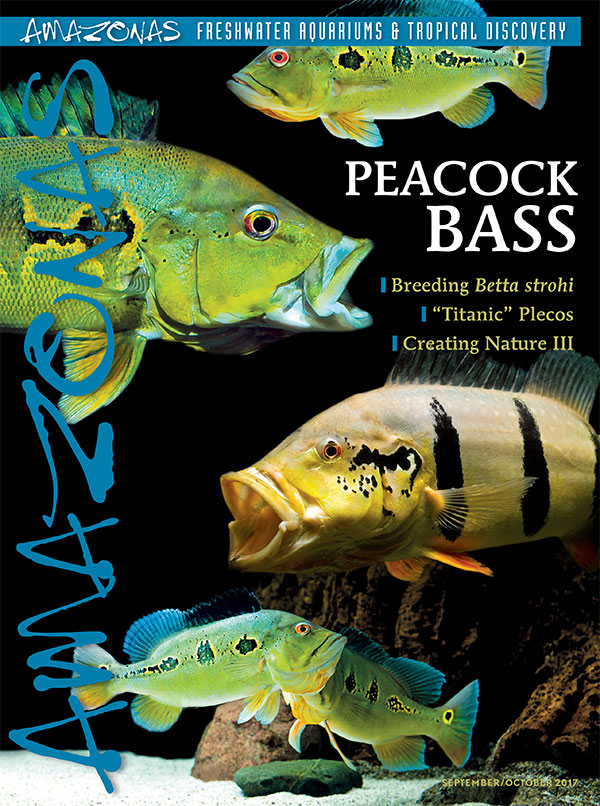 The September/October 2017 Issue of AMAZONAS Magazine is printed and now on its way to magazine subscribers, local aquarium shops, and better bookstores. On sale August 8th, 2017.

Readers of the Digital Edition can access it now: AMAZONAS DIGITAL EDITION
Paid subscribers can log in with their email addresses for instant access. The AMAZONAS digital version is available for desktop and laptop computers and tablets.

HEREWITH, A sampling of articles and opening pages for readers curious about what the issue will bring. 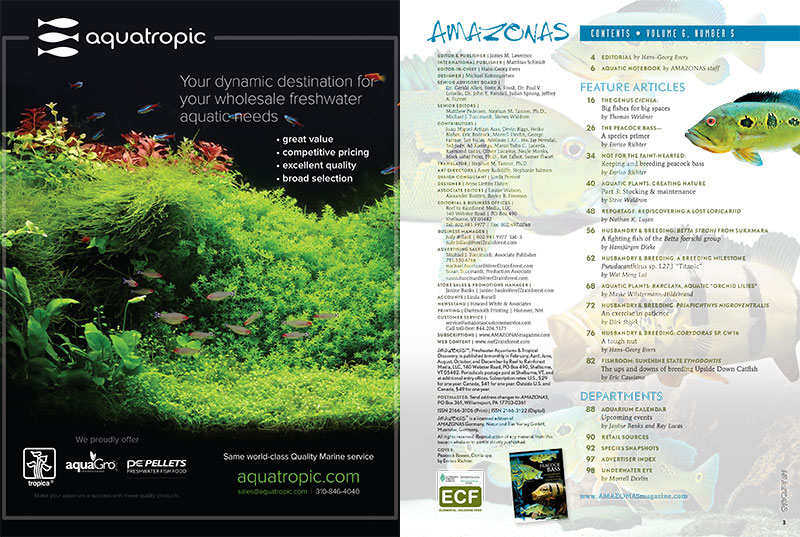 The Table of Contents: a road map to diverse content, features, and expert contributors to be found in this issue. Read the TOC online here. 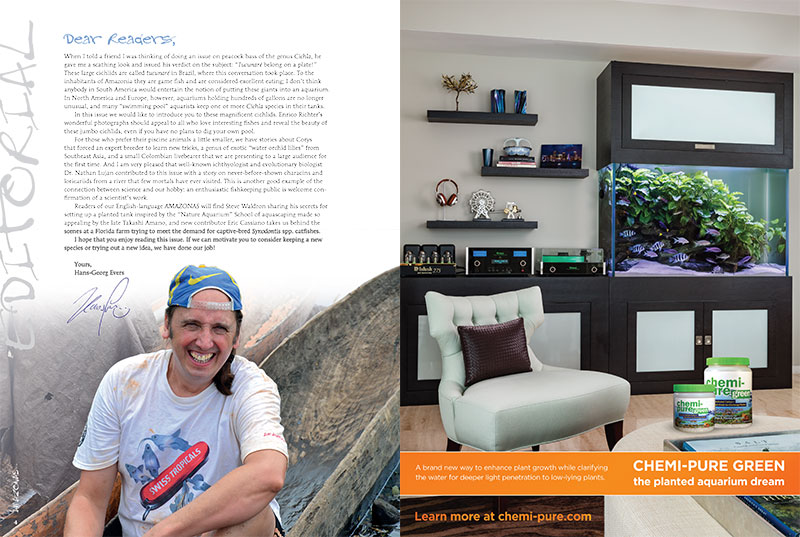 “When I told a friend I was thinking of doing an issue on peacock bass of the genus Cichla, he gave me a scathing look…in North America and Europe, however, aquariums holding hundreds of gallons are no longer unusual, and many ‘swimming pool’ aquarists keep one or more Cichla species in their tanks.” —Hans-Georg Evers, introducing the latest issue. 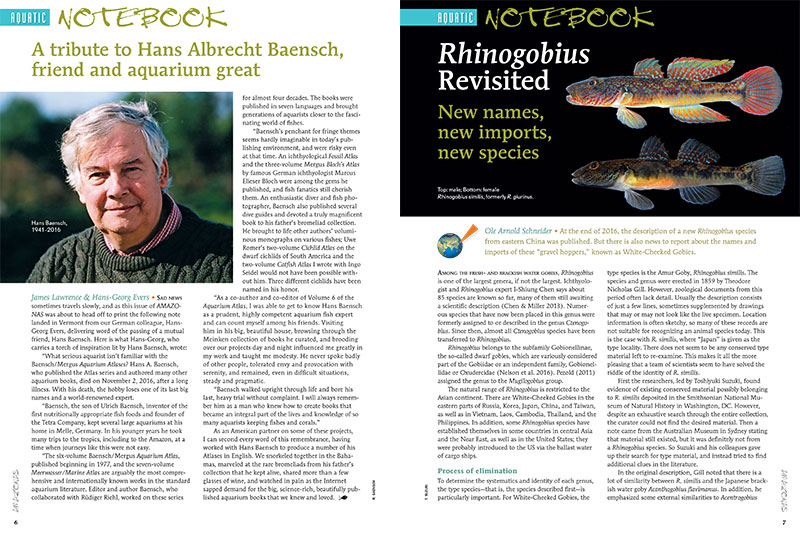 A remembrance of the life of Hans Albrecht Baensch by his protegee H-G Evers and old friend James Lawrence, publisher of the English-language AMAZONAS. Next is an update on the fascinating gobies in the genus Rhinogobius to lead off Aquatic Notebook. 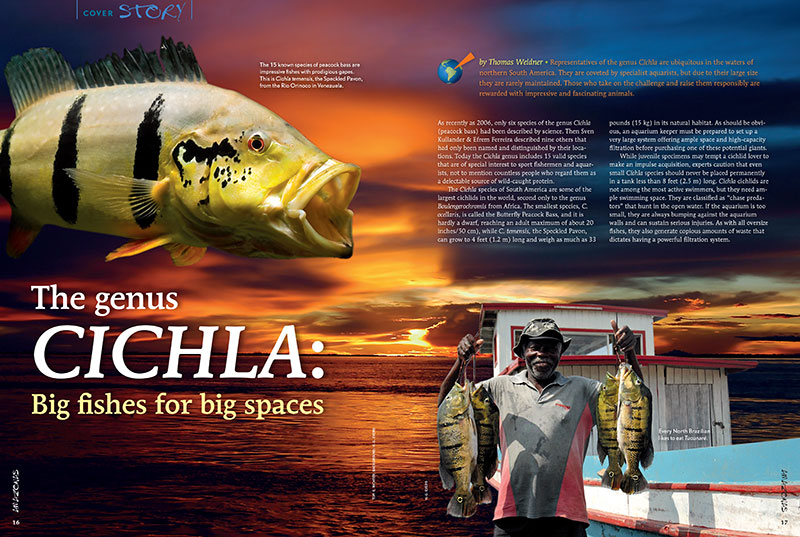 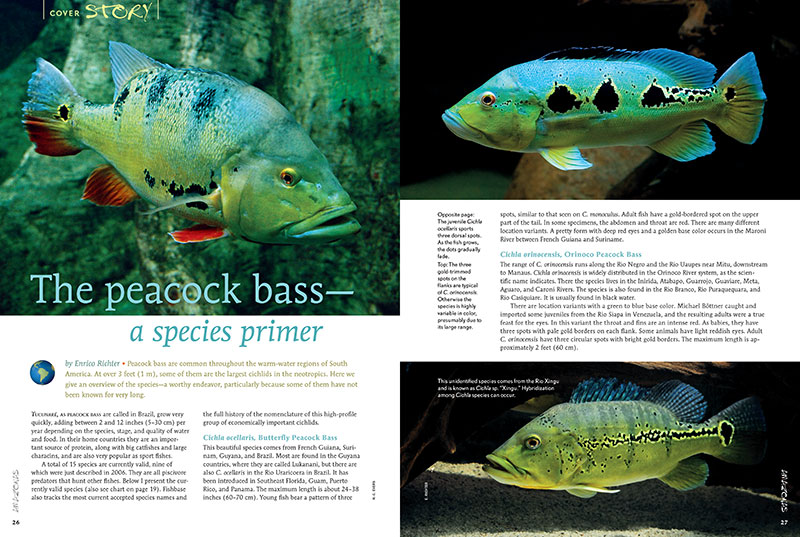 Enrico Richter presents: The Peacock Bass—a species primer, including many species only recently described, and some that can reach sizes of over 3 feet (1 m) in length. 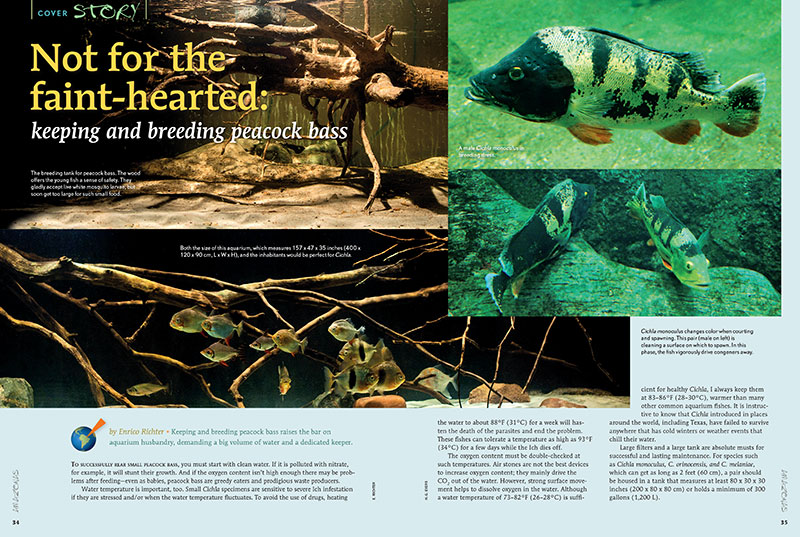 Enrico Richter shares a challenge: Not for the faint-hearted: keeping and breeding peacock bass. Read it and dream. 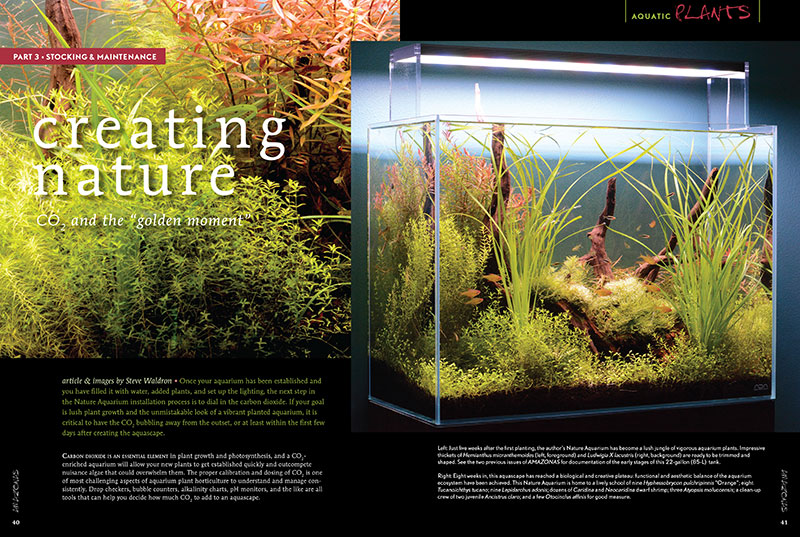 In the AMAZONAS continuing planted aquarium and aquascaping series Creating Nature, Senior Contributor Steve Waldron discusses the application of CO2 and the “golden moment” in setting up a simplified new “Nature Aquarium.” 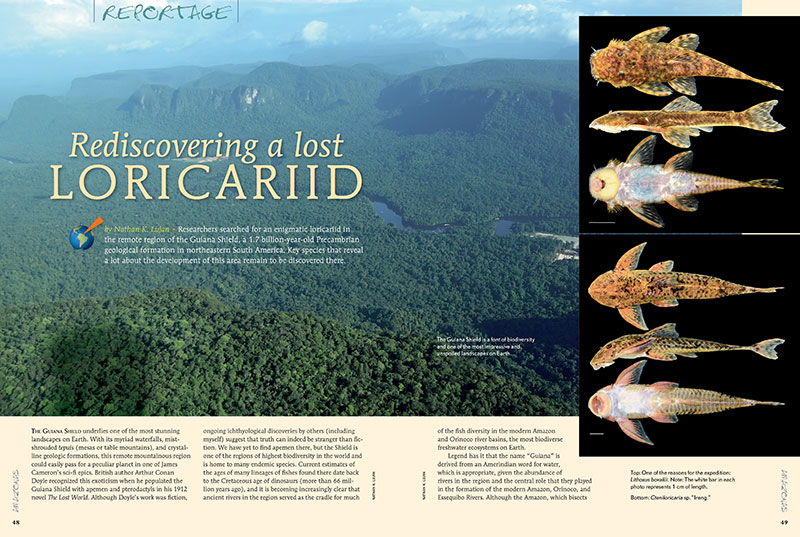 We’ve all misplaced valuable things, but imagine science losing an entire species of catfish and all track of the river they come from. Toronto-based ichthyologist Dr. Nathan Lujan unravels a biological mystery tale in Rediscovering a Lost Loricariid—and discovers a couple of new species in the process. 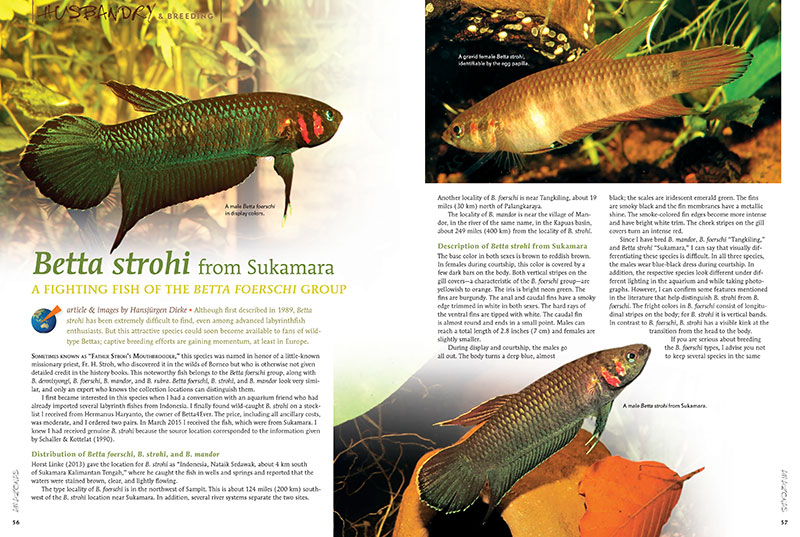 Although first described in 1989, Betta strohi has been extremely difficult to find, but this attractive species could soon become available to fans of wild-type Bettas, says a fan of the species, Hansjürgen Dieke. 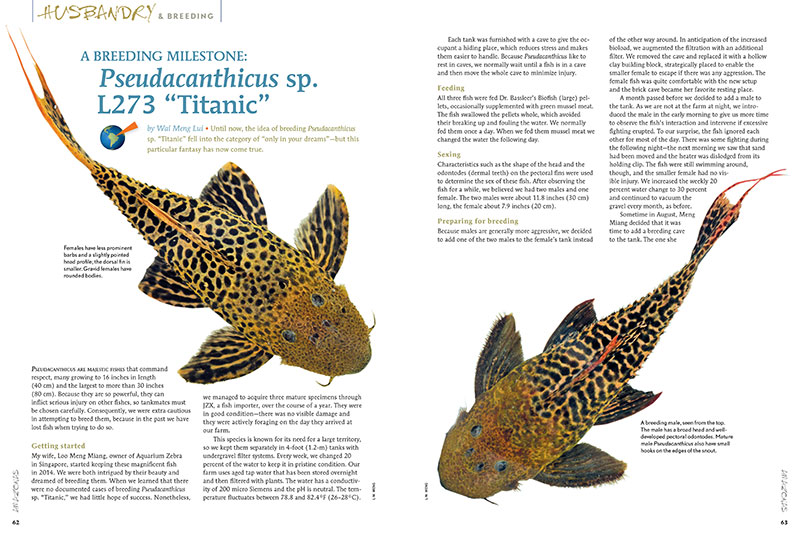 Until now, the idea of breeding the big, magnificent Pseudacanthicus sp. “Titanic” fell into the category of “only in your dreams”—but this particular fantasy has now come true. Discover how in “A Breeding Milestone: Pseudacanthicus sp. L273 ‘Titanic,’” by Wai Meng Lui. 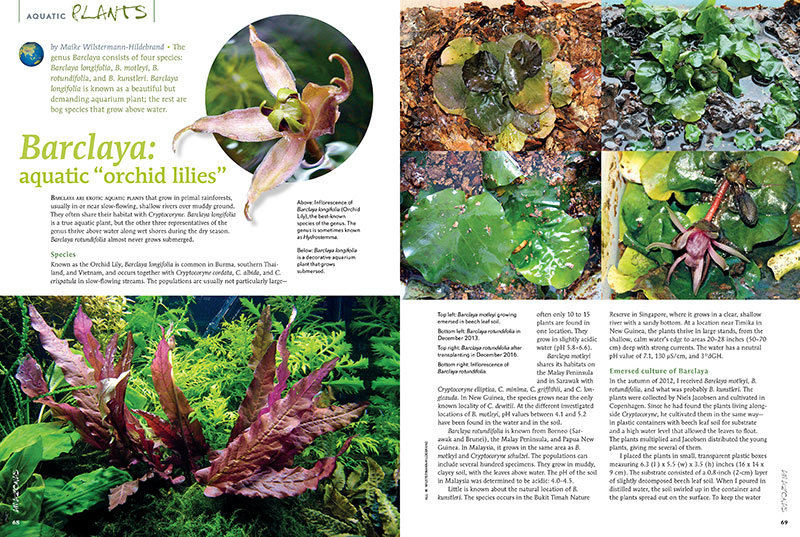 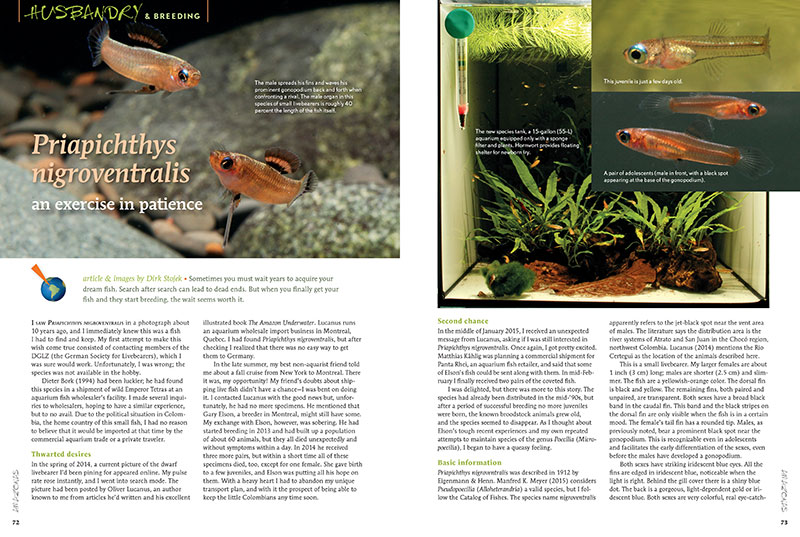 “Sometimes you must wait years to acquire your dream fish. Search after search can lead to dead ends. But when you finally get your fish and they start breeding, the wait seems worth it,” says author Dirk Stojek, introducing his experiences with the rare Colombian livebearer Priapichthys nigroventralis. 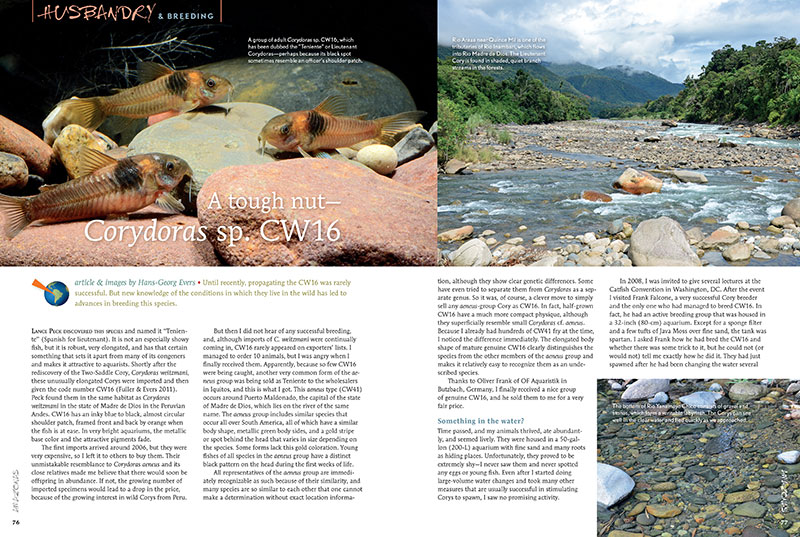 Until recently, Corydoras sp. CW16 was stubbornly difficult to breed, even for experts. But new knowledge of the conditions in which they live in the wild helped solve the puzzle, says AMAZONAS Editor Hans-Georg Evers of his quest for the secrets held by this handsome species. 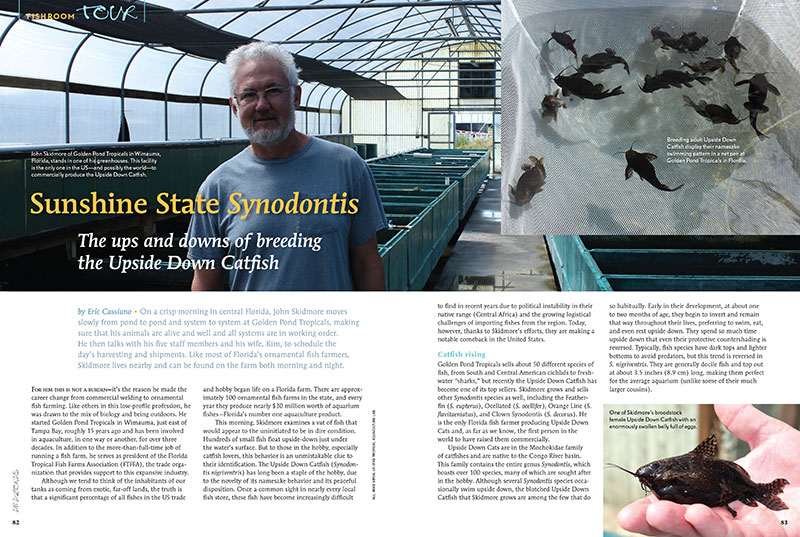 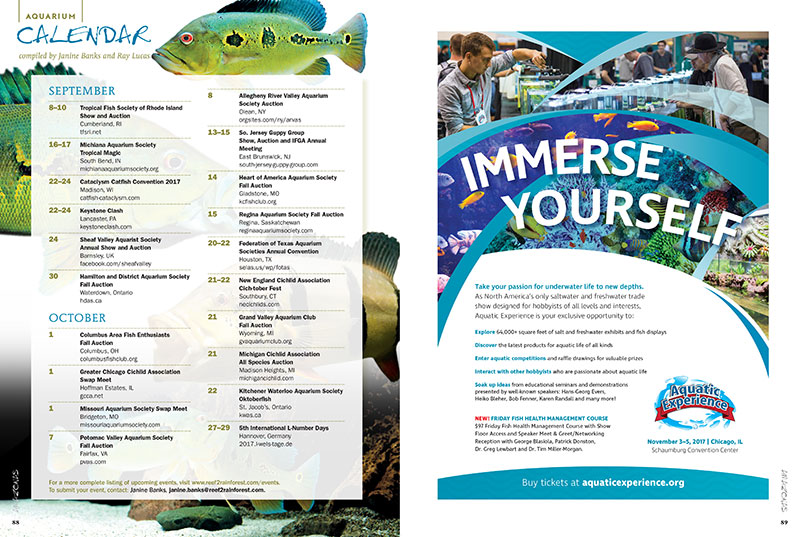 The Big Events: What’s happening and where in the aquarium world. Have an event coming up? Send Janine Banks an email to make sure it gets posted online and in print. 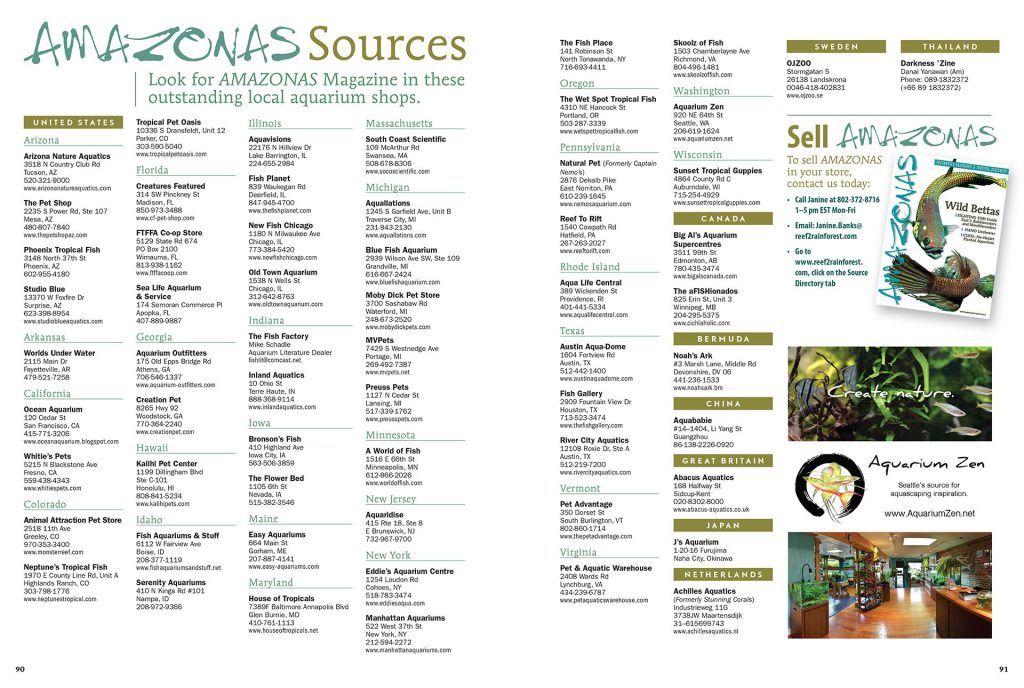 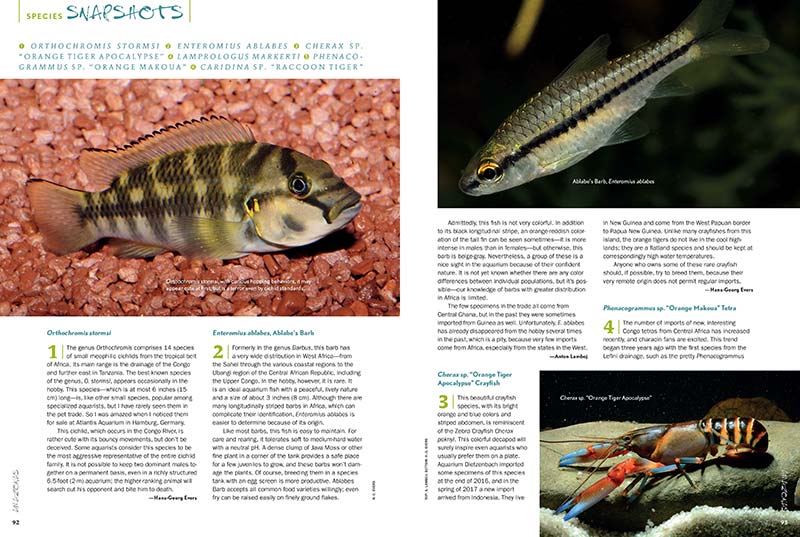 • Already a subscriber? ACCESS this issue now!
AMAZONAS subscribers can log in with their email address and read the Digital Edition and App Editions immediately.