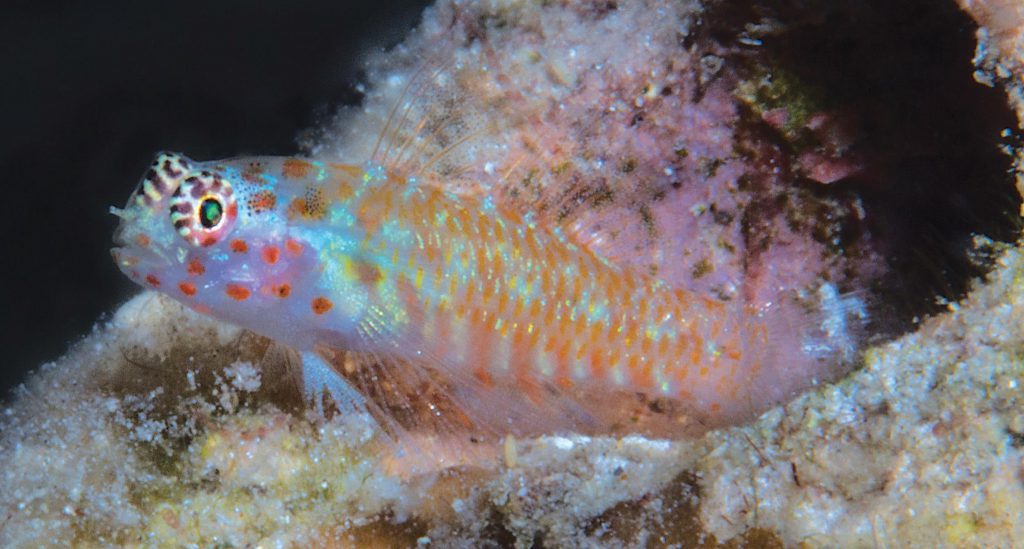 The family Gobidae arguably got a big update in the past month, with a deluge of diminutive new goby species for fans of nano fishes. Ten new species of freshwater and marine gobies, all hailing from the tropical Western Pacific region, were recently described in three separate papers. All of these species descriptions are freely available for download and review.

This female Schismatogobius
arscuttoli has a subtle charm with a peppering of light blue spots. Image credit: Philippe Keith

A male Schismatogobius risdawatiae, a freshwater species with a beautiful yellow dorsal fin and red markings on the flanks. Image credit: Nicolas Hubert

Three of the species can be found in Sumatra; S. saurii can also be found in Java, Bali, Lombok, Ambon, and Panay, while S. bussoni is known only in Seram (formerly Ceram) and Ambon Islands (part of Indonesia’s Maluku Islands). All of these species were “collected in freshwater streams with moderate to fast flow in shallow areas of gravel,” with most reported at low elevations, some just above the area of “tidal influence.” These species’ general proximity to saltwater is noteworthy, as some coastal freshwater gobies are known to have a marine larval phase before returning to freshwater later in life.

Three of the new species are reported as sexually dimorphic and sexually dichromatic; only females were observed for S. arscuttoli, leaving us to wonder what the male of the species looks like.

Publishing in the Journal of the Ocean Science Foundation, authors David W. Greenfield and Mark V. Erdmann bring us Eviota pictifacies, a new dwarf goby from Sumbawa, Indonesia (Teleostei: Gobiidae). A quick check-in with Fishbase currently shows their running list of valid Eviota species containing 108, while the authors place that number higher, at 112. E. pictifascies brings the total to at least 113, with potentially more new species descriptions to come. The etymology of the species epithet pictifacies suggests that the “Painted-Face Dwarf Goby” may be a good common name for the species.

Initially discovered during Whale Shark surveys, Eviota pictifacies is another tiny goby species, with the holotype and paratypes measuring only from 13.4 mm to 17.00 mm standard length (approximately 0.5 to 0.66″). Interestingly, if you could actually get one to sit upside down underneath a microscope for long enough, you’d discover that there is some sexual dimorphism in this species of Eviota. The authors report that the “urogenital papilla of male [has] straight smooth sides with many small papilla on end, [while the] female urogenital papilla [is] smooth and bulbous, with short finger-like projections on end.” While probably difficult to discern in live specimens, this is perhaps useful information for sexing other Eviota spp. gobies as well, should you ever be bold enough to try to breed them and inventive enough to find a way to put this information into practice.

Eviota pictifacies dwells in warm, shallow waters. The authors document their habitat as “a shallow fringing reef, subject to significant terrigenous sedimentation (runoff from land) and relatively warm water due to the limited circulation in the large bay of Teluk Saleh. Individuals were observed in a narrow depth range of 3-8 meters, and were frequently seen resting on live massive-coral colonies.”

You can view additional images and read the full description here: http://www.oceansciencefoundation.org/josf/josf27a.pdf 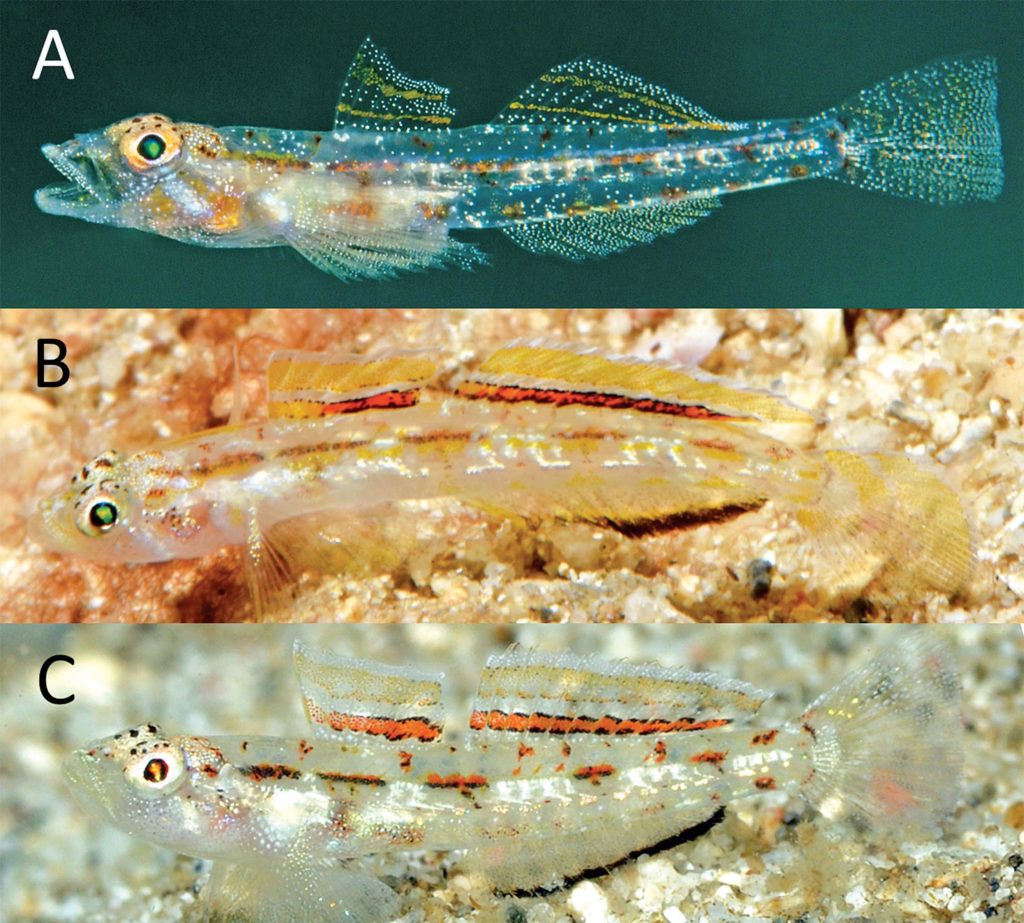 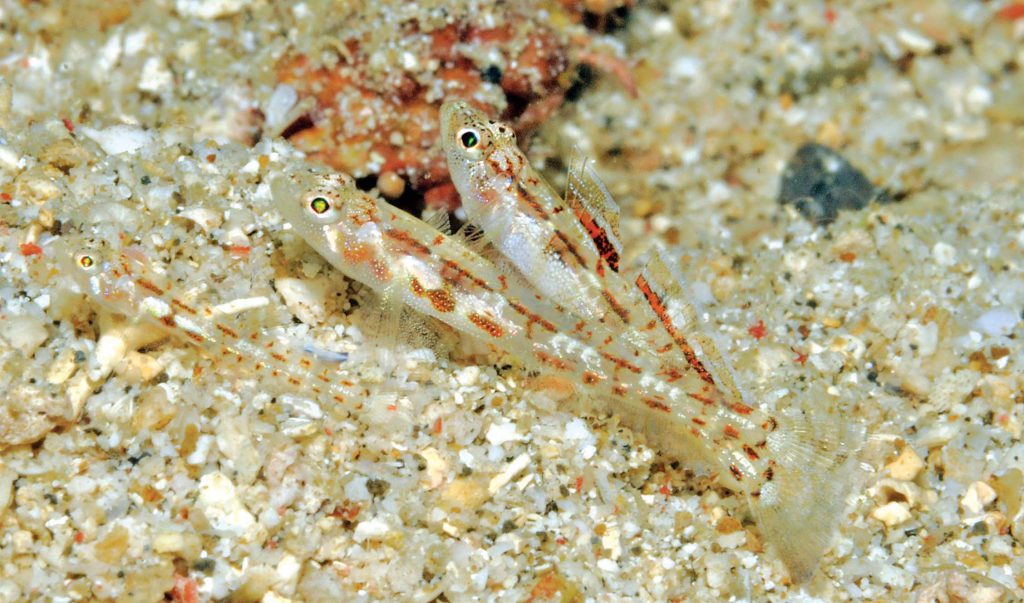 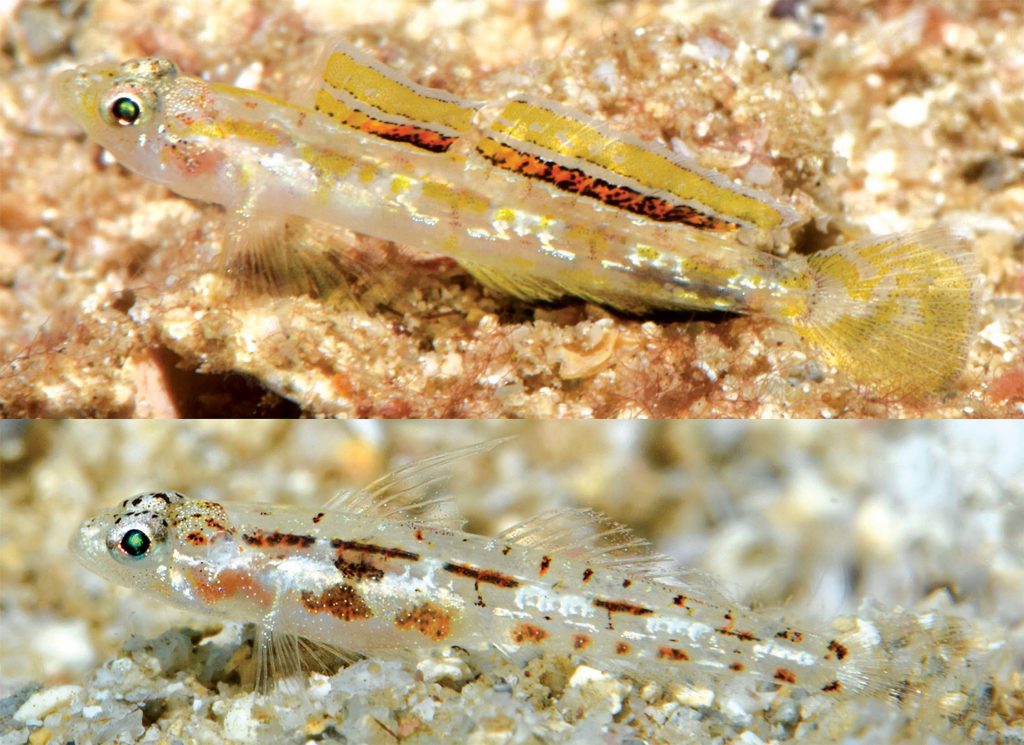 The paper also includes a useful diagnostic key for differentiating all of the species contained in the genus Grallenia. The paper closes by noting that some of the specimens associated with the type species of the genus (G. arenicola) may in fact belong to yet another undescribed species, so expect more news to come.

Download the full paper and see more images at: http://www.oceansciencefoundation.org/josf/josf27c.pdf

Get More from CORAL and AMAZONAS Magazines

If you simply can’t get enough of Gobies, don’t worry: they’re often covered in our print publications. For example, consider these cover features from past issues: 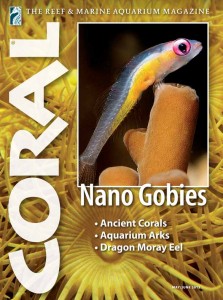 Click cover to order this back issue for your CORAL collection. 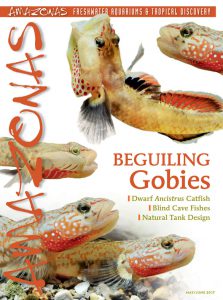 Click cover to order this back issue for your AMAZONAS collection.