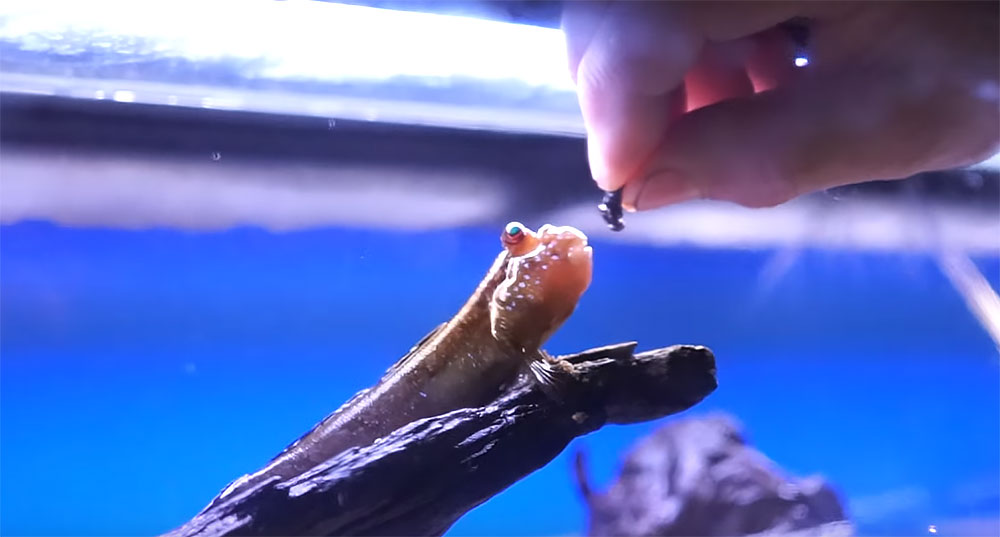 A mudskipper, with the prowess of the most intelligent dog, successfully begs for a tasty treat at ABC Aquarium in Penfield, NY.

At the start of March, we shared a viral mudskipper video posted by Facebook user Michael Fong on the AMAZONAS Facebook page. In the video, an aquarist is seen feeding pellet foods to a swarm of mudskippers by hand. Based on reader response, that video will likely wind up in our annual top-ten recap at the end of the year.

Researching the backstory on that video revealed a deeper and more wonderful reality; hand-feeding Mudskippers is totally a thing, and it’s totally awesome.

The often overlooked mudskippers, gobies of the subfamily Oxudercinae, are well known as the “walking fish.” They typically inhabit intertidal areas around the Indo-Pacific and even east Atlantic coast of Africa, and they are found in salinities from full freshwater to fully marine and everything in between, in temperate to tropical climates. Counts vary, but it’s safe to say that dozens of species in the subfamily qualify as mudskippers. They adopt a somewhat amphibious lifestyle and spend portions of their day terrestrially.

In the aquarium trade, they’re generally relegated to the world of oddball brackish fish that, at best, often get one tank out of hundreds at your local fish store, where they just seem to sit there as curios; they are interesting, but perhaps not taken all that seriously as fish you’d want to keep at home. Bu,t wow, mudskippers may have just won our collective hearts as possibly the most personable, interactive fish you could own (and I thought training my archerfish to jump out of the water to eat krill from my hands was pretty amazing). As YouTube user gacrotalus puts it: “A well-trained skipper…[is] man’s best friend.”

Check out this collection of aquarists feeding their mudskippers by hand. Do you have an example of aquarist-fish interaction that tops this? Tell us about it!